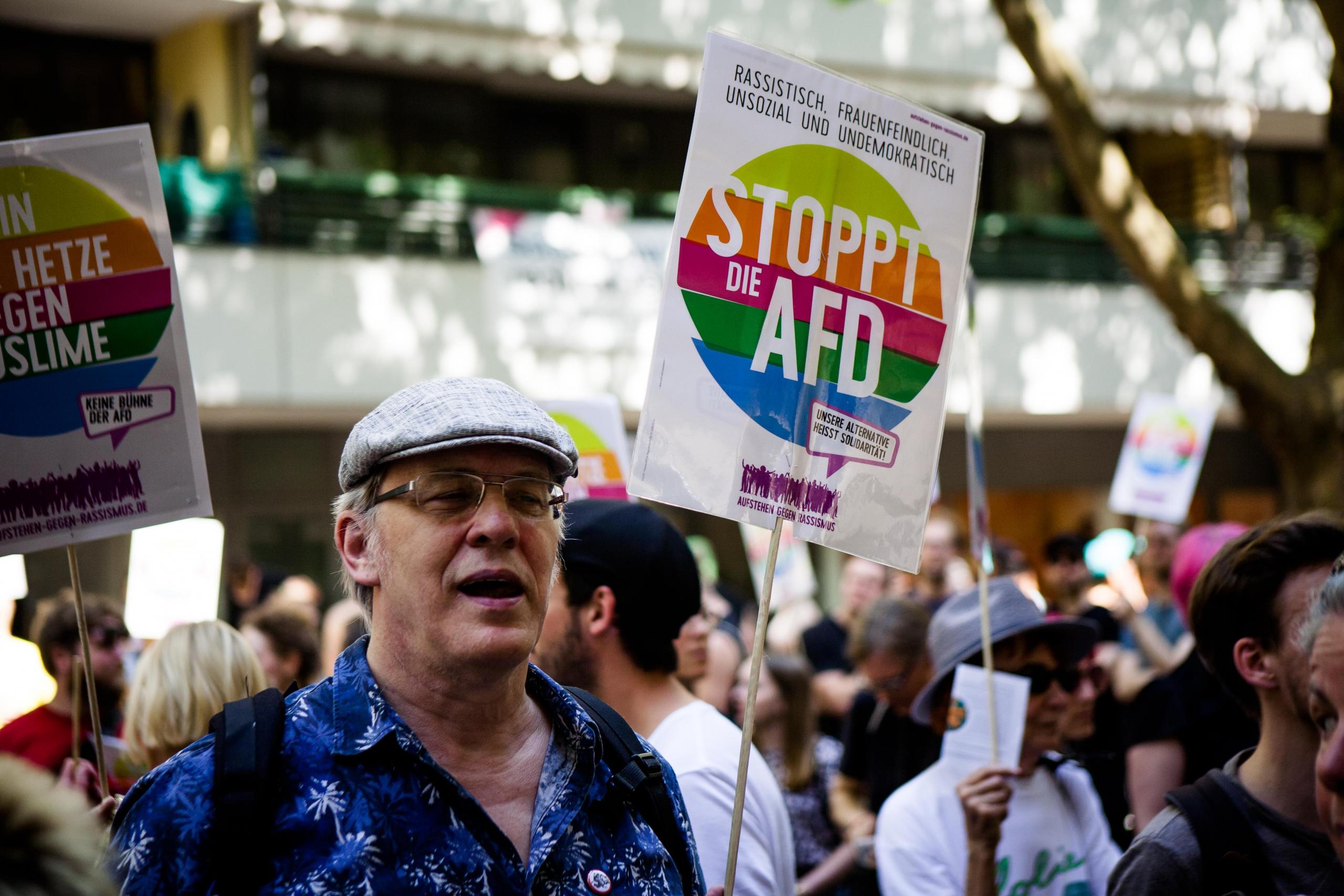 In 1966, German philosopher Theodor Adorno could uncontroversially assert that the Holocaust imposed “a new categorical imperative” on mankind. But, today, the status of the Nazi genocide is more ambivalent than it has been at any point since 1944. While the decreasing cultural and historical weight of the Holocaust is not directly attributable to the rise of European populism, both partake of common political and discursive dynamics.

Across Europe, the political right is engaged in a project of reconfiguring identity at the national and supranational levels. In the attempt to systematically displace the cosmopolitan humanism dominant in European public life in the decades after 1945, the Holocaust is increasingly viewed as a problem to be overcome on the path to the promised land of national pride and self-assertion.

A survey conducted on behalf of CNN of seven thousand Europeans in seven countries on attitudes toward Jews and the Holocaust has produced some alarming, if not entirely surprising numbers.

One respondent in 20 claimed never to have heard of the Nazi genocide, including 12% in Austria. Among those who had heard of the event, two-thirds believed that commemoration had positive effects, although a large and significant minority also believed that “Jews use the Holocaust to advance their own position or goals.”

But it is also worth noting that the general view of the influence of Jews in modern society was exaggerated. The proportion of respondents who thought that Jews exercised excessive influence in politics, media, and finance generally ranged between a quarter and a third. Roughly two-thirds of respondents overestimated the proportion of Jews in the global population and a quarter of Hungarians estimated it at 20% (off by a factor of 100).

The status of the Holocaust in European public life is particularly significant in light of the rise of populism across the continent. Yet the connection between the two is perhaps not as obvious as that between these movements and the more widespread anti-immigrant sentiment that is so central to populists. The precise nature of the connection is bound up with what populism is, and that itself is a fraught question.

There are a number of approaches to the phenomenon of populism, but the most prominent is associated with the work of the Dutch sociologist Cas Mudde. Mudde characterises populism as, “a thin-centred ideology that considers society to be ultimately separated into two homogeneous and antagonistic camps, ‘the pure people’ versus ‘the corrupt elite’, and which argues that politics should be an expression of the volonté générale (general will) of the people.

With a certain degree of local variation, the driving force of European populist movements is nationalism, constructed on the basis of a view of the people constituting a national community.

There is some variation on both the in groups and out groups that define these movements. But across the spectrum of European populist parties, from Alternative für Deutschland (AfD) in Germany, to Rassemblement National (AKA Front National) in France, to the Jobbik and Fidesz parties in Hungary, to Prawo i Sprawiedliwość (PiS) in Poland, and the Vlaams Belang in Belgium, the defining positive characteristic is Christian nativism that, while often xenophobic, does not evince the palingenetic ultranationalism that defines fascist parties.

Sometimes, as in the case of the PEGIDA movement in Germany, the national community is seen as being comprised by the larger cultural unit of the West. This creates the possibility of forging supranational alliances, both across Europe and further east, in concert with the ideologists of Eurasianism. As such, it is not surprising that there is a pronounced tendency to view Russia sympathetically.

One of AfD’s core positions in the elections of 2017 was the promise to remove sanctions from Russia. Marine Le Pen’s then-Front National was helped out of its financial difficulties in 2014 by loans totalling 11 million euros from a Russian bank, and Le Pen herself is on quite personable terms with Vladimir Putin.

If Poland’s governing PiS is less sanguine about Russian influence, this has more to do with residual (and historically well-founded) suspicions about Moscow’s expansionistic intentions than with any differences at the level of political ideology.

It is a sign of the transformation of European politics since 1945 that Muslims and people of Middle Eastern extraction more generally have, to a great extent, taken over the role of bête noire for European xenophobes formerly occupied by Jews (and Ostjuden in particular).

For decades after the end of the Second World War, overt anti-Semitism was a very bad odour in European political life, although the more sub rosa variety was never absent.

In the years since the end of “actually existing socialism” in 1989, immigrants have come to be used as a tool for the European right to frame their own alienation from the political centre. The fact that they exist at all is regarded as a sign that indigenous Europeans have become second class citizens in their own home.

The propensity to view Jewry as an alien and threatening entity, finds itself at home in such circumstances, highlighting the tendency of the Holocaust to cast national identities in an unfavourable light.

Hence, the ease with which populists transition from Islamophobia to anti-Semitism, even though the two prejudices tend to be sensitive to the class differences which distinguish Middle Eastern migrants and European Jews. The former are colonists and the latter globalists, seeking to dominate Europe culturally and economically.

This is most obviously the case in Germany, where old habits die especially hard, despite the fact that the AfD is compelled by laws forbidding Holocaust denial to use caution lest it risk the fate suffered by the neo-Nazi Die Nationaldemokratische Partei Deutschlands (NPD) a few years ago and have their assets sequestered.

Nevertheless, the Islamophobic party, both officially, and as matter of individual conduct, persists in chipping away at Germany’s culture of guilt, as evidenced by the bulk of the AfD’s members in the Bavarian parliament last week walking out during a speech commemorating the Nazi genocide by Charlotte Knobloch, the former head of the Central Council of Jews.

Earlier in January, the Bundesamt für Verfassungsschutz, the government office tasked with defending the German constitution, announced that it would be monitoring the “Flügel” regional subgroup of the AfD, whose leader Björn Höcke has made a number of ill-considered public utterances about the Holocaust and Germany’s culture of memorialisation in recent years.

The cases elsewhere are numerous. In France last year, Marine Le Pen argued publicly that blaming the notorious roundup of 13,000 Jews in the Vel d’Hiv cycling track in 1942 on the French was a “national insult”. This is standard fare for conservatives trying to find their way out from under the burdens of their collaborationist precursors.

Le Pen’s contention that the fact that the roundup was ordered by the Nazi occupiers hardly absolves the French authorities who carried out the action from guilt. In any case, the Vichy government comprised a large number of committed anti-Semites and showed no disinclination whatever to send the Jews to their doom at the hands of the Nazis.

Viktor Orbán’s Fidesz government in Hungary has, in the last couple of years, contrived to rehabilitate the reputation of Admiral Miklos Horthy. This is a challenging task given that Horthy was directly responsible for sending 100,000 Hungarian Jews to be murdered in Auschwitz and then was instrumental in setting up a government that sent another 300,000 to their doom.

One might have thought that it was enough that Horthy was allowed to see out his twilight years in exile in Portugal, unlike a number of other figures in that government (including Döme Sztójay and Bela Imredy) who were tried and executed immediately following the end of the war. But the general condemnation of Horthy is viewed by Orbán’s government, and by Hungarian populists generally, as a blot on the national escutcheon.

In Poland, where the bulk of the actual murders committed in the Holocaust actually took place, recent years have seen efforts at a sort of historical prophylaxis. In 2001, the Princeton historian Jan Gross published Neighbours: The Destruction of the Jewish Community in Jedwabne, Poland. There, he detailed how the population of a Polish town had spontaneously murdered their Jewish neighbours without any prompting from (and actually prior to the arrival of) the Nazi occupiers in 1941. The book sparked a contentious public debate, with many on the Polish right claiming that Gross had defamed the national honour.

There have been numerous efforts since that time to limit the scope of guilt for the murder of the Jews to the Nazis. The Nazis did murder hundreds of thousands of non-Jewish Poles, and their policy for much of central Poland involved ethnic cleansing and the colonisation by Volksdeutsche populations. But the Law and Justice Party last year sought to make it a criminal offence (punishable by imprisonment) to claim that the Polish state or people were complicit in Nazi crimes.

This is the sort of law that smacks of bad conscience. In the face of the international outcry that followed, the Polish government rescinded the threat of imprisonment, but the law itself remains on the books.

A further consequence of the law is a campaign of harassment and disinformation directed at the historians of the Auschwitz museum, a particularly disturbing turn of events given the centrality of the Auschwitz memorial site to Holocaust memorialisation and historical research.

The Holocaust is a peculiar historical event in the sense that it presented (and continues to present) considerable difficulties for Europe. Both in the era of colonialism and after, Europeans have been perfectly prepared to countenance the occurrence of mass killing and other forms of barbarism in whatever benighted part of the world it might happen — just outside Europe.

That such barbarism might be indigenous to Europe, or that scientific and industrial principles might be applied to the process, destabilises European identity and inspires efforts to diminish, deny, or otherwise mitigate the Holocaust. Market globalisation, the enlargement of the EU, and the prolongation of the War on Terror have only made the situation worse.

There is an important sense in which anti-immigrant and Islamophobic rhetoric are of a piece with a resurgence of anti-Semitism and the desire to get out from under the historical burden of the Holocaust. Unlike in the United States, where anti-Semitism on the right often coexists with an odd brand of philo-Semitism, based on the view that the state of Israel has an important role to play in the (impending) endtimes, European anti-Semitism fits more smoothly into the demonization of those designated as cultural or racial outsiders. Although one would occasionally see Israeli flags at PEGIDA demonstrations, animus toward immigrants and animus toward Jews (and their history in Europe) tend strongly toward correlation.

The rise of populism presents considerable challenges for acknowledging the role of the Nazi genocide in the moral foundations of European society. For those engaged in the project of building up and venerating national communities, there is no upside to preservation of the history and memory of the Holocaust. It falls to the Vernunfteuropäer (rational Europeans) to be the bearer of that history.

In an era when the power of reason in politics is under constant and increasing threat from resurgent nationalism, the obligation to acknowledge moments at which the nation and the people may have behaved in an actively criminal way is easy to abjure. The fate of this history and its role grounding the cosmopolitan ethical imperative to defend human dignity is imbricated in the defence of the European project.

Not every media organisation can bear criticism, even self-criticism, but others require it to keep going. END_OF_DOCUMENT_TOKEN_TO_BE_REPLACED

Foucault once suggested that Clausewitz’s famous observation, “war is not merely a political act but a real political instrument” carried out by other means, be reversed, with politics made an extension of war. END_OF_DOCUMENT_TOKEN_TO_BE_REPLACED

Brexit will turn three on the last day of January, over six years since the 2016 referendum kickstarted Britain’s race to the bottom. END_OF_DOCUMENT_TOKEN_TO_BE_REPLACED