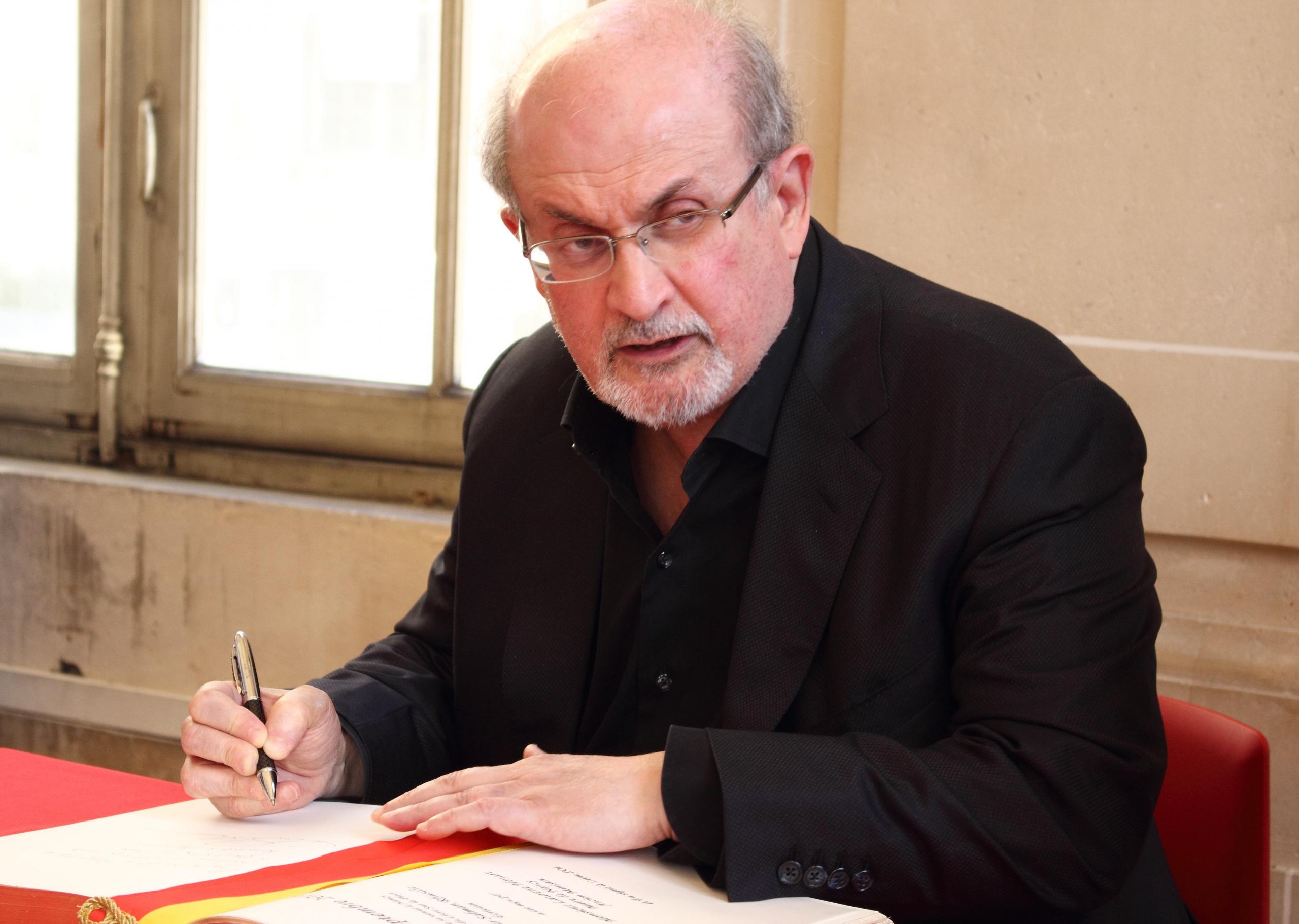 It was on Valentine’s Day in 1989 that Ayatollah Khomeini issued his infamous fatwa on Radio Tehran calling on all zealous Muslims to kill Salman Rushdie and his publishers. The decrepit mullah was challenging the faith of Muslims all over the world. The message was clear: “Prove yourself, take out this blasphemer!”

The Satanic Verses (1988) had only been out a few months and it had prompted demonstrations against its controversial content. Rushdie, who comes from an Indian Muslim family, knew he was going to offend and anger a lot of people with his book. But no one could have predicted what would follow.

Khomeini’s words touched a nerve for many young British Muslims who were grappling with their own identity. It wasn’t long before bombs were being planted in bookshops across the UK, and soon the book’s translators were being targeted as far apart as Italy and Japan.

The irony is that the Iranian government never actually banned the book it found so crass and despicable. However, the book was banned in India much to Rushdie’s dismay. He insisted that “the book actually isn’t about Islam”.

The Satanic Verses was consistent with Rushdie’s body of work. It wasn’t the first time the writer had encountered controversy. His third book Shame(1983) was banned in Pakistan because of its portrayal of the country’s rightward turn. Notably, the book featured a mad mullah, who was the general’s best friend.

Today we all know the names of similar controversies, from the Danish cartoons to the front covers of Charlie Hebdo. Rushdie has compared himself to the first bird in Alfred Hitchcock’s The Birds. It’s only when you see that the sky is full of birds that you remember seeing that first bird and what it meant.

It’s easy to see The Satanic Verses as the first case of people not being able to cope with being offended, and quickly moving to crush the dissenting opinion in their midst. However, this would be ahistorical. It’s no coincidence that this is exactly the narrative the right prefers on free speech issues.

Freedom of expression is a precious value which everyone ostensibly supports, yet we’re meant to believe it’s under constant threat from people who are too sensitive. There is no human right not to be offended, and the anti-PC brigade very much wants to have this fight for its own ends.

In the aftermath of the fatwa, Rushdie tried to placate his persecutors. He issued a formal apology, and there were reports that he even reconverted to Islam. None of these gestures would appease the likes of Khomeini. It was too late.

The strangest thing about The Satanic Verses controversy is that the book would have been a non-issue for many Muslims just a few years before. This suggests that something changed in the late twentieth century.

Kenan Malik stressed just how modern fundamentalism is in From Fatwa to Jihadi (2009). “Literalism is a very modern phenomenon,” Malik said. “People think of fundamentalism as a throwback to early Christianity or early Islam. In fact, it’s the very opposite.”

Such people are detached from community that they long for a new way of relating to faith. According to Malik, Islam has become an identity marker in a way that it wasn’t for a lot of British Muslims in the past.

The Saudi regime began working to export and externalise the Islamist threat around the world, partly out of fear for its own future. Meanwhile, in Pakistan, General Zia ul-Haq had initiated what he called ‘Islamisation’ of the country following the overthrow of the Bhutto government.

Rushdie predicted that this top-down Islamisation of Pakistani society would not last because the population had a much different approach to religion than other countries. He was wrong, sadly. Even after General Zia fell, the state has been ensnared by the forces of reaction.

So by the time that The Satanic Verses was published, the Muslim world was a different place and a book that might have gone unnoticed years before became the focus of newfound cultural anxieties.

It may be that the failures of revolutionary nationalism in the so-called Third World had left open a vacuum for reactionary forces to gain ground. In countries across North Africa and West Asia, the spectre of Islamism took the place of secular nationalism and communism.

This was just as Western Muslims began seeking out their own identity. They came up against a racist society, even though their parents had tried their best to assimilate to the host culture of former colonial powers like Britain and France.

The deeper problem is that liberal societies by definition don’t stand for any core values apart from the right to have your own values. Cultural anaemia is all pervasive, and a society that believes in nothing has little to offer people looking for a meaningful life.

After the Cold War, the US and much of Europe was in a triumphant phase. Communism was no more, and globalisation was the future. It seemed as if all the great struggles were over. Even the Iranian government seemed to be changing.

Reformist President Khatami had come to power and wanted to reintegrate Iran into the global order. The British business community wanted the same thing. So the Islamic regime pledged to “neither support nor hinder assassination operations” against Rushdie in 1998.

That’s as far as the regime felt it could go. The fatwa technically couldn’t be revoked because Khomeini had died and only he had the power to lift this edict. Nevertheless, it was just far enough to spare Rushdie.

By the time the planes hit the Twin Towers, Rushdie had undergone a transformation. He was a liberal hawk, who had backed NATO in the Balkans and supported the US invasion of Afghanistan. Fortunately, he held back from backing the US war on Iraq, but it was clear he was no longer on the same side as Tariq Ali.

The ‘War on Terror’ brought with it new defenders. A slew of writers and intellectuals came out to wage war against faith and irrationalism. They claimed that the source of all the world’s woes could be placed on fanaticism.

Unsurprisingly, Salman Rushdie was quite comfortable with this crowd. He was one of the martyrs of reason, often mentioned in the same breath as Ayaan Hirsi Ali and other ex-Muslims. Secularism became a rallying cry for a new imperialism.

It’s now a cliché to point out that the New Atheists almost exactly matched the radical Islamists in their fundamentalist account of religion and their ahistorical view of the world. Terrorism couldn’t be explained in historical terms. It was all about the backward beliefs of Muslims.

The tragedy is that Rushdie didn’t have to take this path. He was always more interesting than Martin Amis and Ian McEwan. His writing concerned post-colonial India and Pakistan, dual identity and the experience of racism in multicultural Britain. By contrast, McEwan and Amis can barely write about anyone who isn’t white and middle class.

Thirty years after the fatwa, the world is still caught between secular reason and fanatical belief. The West is now struggling to deal with the consequences of its war against radical Islam.

Photograph courtesy of ActuaLitté. Published under a Creative Commons license.

Not every media organisation can bear criticism, even self-criticism, but others require it to keep going. END_OF_DOCUMENT_TOKEN_TO_BE_REPLACED

Foucault once suggested that Clausewitz’s famous observation, “war is not merely a political act but a real political instrument” carried out by other means, be reversed, with politics made an extension of war. END_OF_DOCUMENT_TOKEN_TO_BE_REPLACED

Brexit will turn three on the last day of January, over six years since the 2016 referendum kickstarted Britain’s race to the bottom. END_OF_DOCUMENT_TOKEN_TO_BE_REPLACED