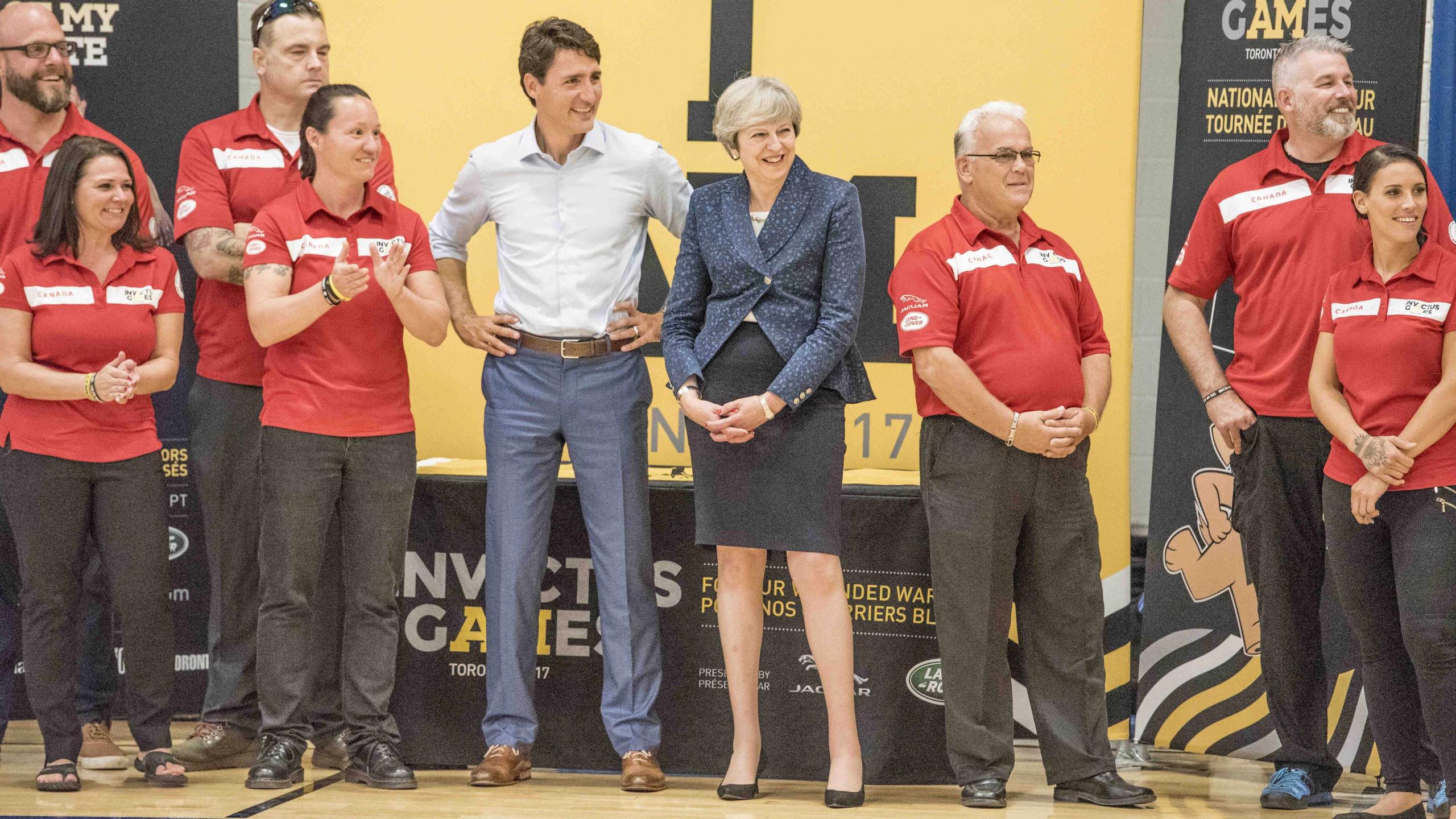 After the collapse of Brexit negotiations with the Labour Party, Sir Graham Brady of the 1922 Committee of Conservative backbenchers demanded a timetable for her departure.

May had already committed to leaving office once her deal on the terms of the UK’s exit from the European Union was passed by the House of Commons.

But with the EU’s deadline now extended until 31 October and cross-party talks going nowhere, it seems the most successful Conservative Party in history felt the time had come.

With the Tories receiving a historic drubbing in the European elections and little hope of the prime minister getting her Withdrawal Agreement Bill passed, the ‘men in grey suits’ finally decided Britain’s premier had reached the end of the road.

This was after her latest attempt to placate the numerous Brexit factions in parliament by offering a range of votes and semi-compromises, on the proviso that MPs pass the Withdrawal Bill (legislation required to bring the agreement into Law) and thus edging Britain that little bit closer to leaving.

These latest proposals yielded little except derision from both the hard-line European Research Group of Leave MPs and those in favour of holding another referendum.

The principle objection — as so often with May’s Brexit wranglings — was that they satisfied no-one and instead just kicked the can further down the road towards that October deadline.

Theresa the appeaser, an unfortunate moniker pinned on her by some Brexiteers, only holds if we accept that she is uniquely bad at appeasing anybody.

This cycle of endless deferral and stubborn unwillingness to compromise is at least partially a character trait of a premier who Ken Clarke memorably described as “a bloody difficult woman”.

Beyond this, though, there is a sense in which this vicar’s daughter, with a very English sense of duty and public service, has over the past three years played a strange historical role, that of the Katechon.

The Katechon is a figure from the New Testament mentioned by Paul in 2 Thessalonians and has to do with that which restrains the coming of Anti-Christ and subsequently the Apocalypse and Last Judgement.

Over the centuries it has been identified with numerous different figures and institutions, from the Roman Empire to the Pope himself.

The operative point is that the Katechon does not resolve the crisis but only holds back its resolution, endlessly deferring judgement.

Ever since she came to power this has been Theresa May’s signal function in British politics.

After David Cameron’s resignation, May was widely seen as the compromise candidate for the leadership and relatively untainted by the bad blood and recriminations that followed the EU referendum campaign.

She never made a secret of the fact she voted to remain but was viewed by many on both sides as a choice for stability, without ideological commitment to either faction.

Theresa May’s self-given mandate to provide “strong and stable government” and “deliver on the vote of the British people” did, however, become a millstone around her neck.

It’s easy to forget that after her Lancaster House speech of January 2017 which laid out the government’s negotiating position with the EU, the Tories enjoyed a ten point lead over Jeremy Corbyn’s Labour Party.

With her red lines set out on leaving the single market, ending freedom of movement and the jurisdiction of the European Court of Justice, May embarked on the most hubristic adventure of her otherwise stubbornly timorous premiership.

At the announcement of the spring 2017 General Election, the headline on the front of the Daily Mail read simply “Crush the Saboteurs”.

The campaign, which had the PM’s personal authority as the government’s unique selling point failed spectacularly. Wherever May toured, her lack of charisma and inability to connect with ordinary people shone through like a beacon in Britain’s long night.

Corbyn, in contrast, drew crowds of thousands, and his personable manner combined with the most socialist manifesto in decades to deliver Labour its biggest vote share since the height of the Blair years.

Labour’s platform had resonated with young people and offered hope to those desperate to avoid the Tory vision of a post-Brexit neoliberal utopia.

After losing her majority in parliament and forming an alliance with the fundamentalist Protestants of the DUP, the hard Eurosceptic MPs that made up the European Research Group smelt blood.

“Now all it takes is me and six mates and we can stop anything,” one ERG member was heard to say. During the spring and summer of 2018, when what came to be known as May’s Chequers plan was revealed, the possibility of a consensus on Brexit faded definitively into the distance.

Minister after minister resigned in protest at what they considered to be a capitulation and backtracking on the Lancaster House principles.

Former shadow Home Secretary Ann Widdecombe, who would go on to run as an MEP for the Brexit Party, called it an “abject surrender”.

Those leaving the government took their place among a mounting group of brickbat throwers on the Tory backbenches; most notably the blonde prince waiting in the wings, Boris Johnson.

By the autumn of last year the EU, which naturally drove a hard bargain, had left the prime minister with a deal all sides hated.

As a result, her capacity to deliver either Brexit or bring her party (let alone the nation) together was critically diminished.

Since then, Theresa May’s role as Katechon has risen to the fore and her strategy shifted to a combination of treading water, deferring decision and rearranging the wording of her withdrawal agreement.

Perhaps one of her most embarrassing moments came in March of this year during the 2nd vote on the agreement, when Attorney General Geoffrey Cox stood up to give his verdict on the changes to the Irish Backstop, the provision to prevent a hard border in Ireland.

In his imperiously booming tones, Cox promptly told the Commons that nothing had changed and the risk to the UK of being trapped in a customs arrangement with the EU was still present. The subsequent vote saw the deal defeated by 149 Nos.

It would be a mistake to consider these events to be entirely of May’s own making. She took the reins of a party more divided than ever on Europe, with the task of delivering a referendum result that stood squarely opposed to the direction of travel of the Conservative’s traditional support in business and the City.

The premier also faced the unenviable task of using parliamentary means to heal a wound in the polity wrought by the direct democracy of the referendum.

Two systems, as one constitutional expert noted, that are mutually antagonistic to one another.

Her style of leadership represents a particularly stubborn iteration of the supposedly ideologically neutral, common sense politics that Britain has traditionally specialised in; but which now, in the face of genuine political division in the country, has become all but redundant.

As we have seen with recent woeful attempts by Change UK to “give voice to the centre ground”, at a time of genuine national polarisation, the old guarantees of liberal centrism offer no solutions.

May’s critics would point to the fact that ever since setting her red lines in 2017, she has relied on an ever-shrinking cabal of advisors while steadfastly refusing to compromise with either wing of her party.

The irony is that despite her failure to deliver Brexit and the complete breakdown of discipline within the Conservative party, the numbers have simply not been there to remove the premier.

Fearing a Corbyn victory at a general election, both her critics and the DUP lined up behind the government to win the vote of no confidence brought by Labour in January.

Last December, the premier also comfortably saw off the challenge to her own leadership instigated mostly by members of the ERG.

Despite constant pressure from the likes of Jacob Rees-Mogg, Iain Duncan Smith and a growing list of former Brexit secretaries, Theresa May clung to power, deferring the inevitable, holding out for a day of deliverance that was never going to arrive.

A Legacy of Division and Injustice

Backfiring slogans have been a speciality of this prime minister, in stark contrast to the slick PR of Cameron and the spin of the Blair years.

“Brexit means Brexit”, “No deal is better than a bad deal”; these words were sharpened by her enemies and fired back with interest.

It’s possible to think someone incompetent while still having a degree of sympathy for them.

Which is why in the case of Theresa May it’s worth remembering the legacy of her time as Home Secretary, during which she implemented the government’s “Hostile Environment” policy on immigration, which led directly to the Windrush scandal and numerous other cases of unjust treatment by Britain’s Byzantine and largely privatised immigration system.

The exact number of individuals affected is still unclear and compensation is for many still years away.

It was under this regime that the notorious “Go home” vans were sent out to stalk immigrant communities with a message that was manna from heaven for Tommy Robinson and Britain’s increasingly confident far-right.

As PM, May will be remembered not only for her Brexit failings but for her inability to respond effectively to the tragedy of the Grenfell fire.

The footage of her being hounded out of the area by locals angry at the lack of material support presaged feelings in her own party. It would be a further two years before they found the will to push her out the door.

Stability and continuity are the hallmarks of liberal British statecraft and nothing represents them clearer than the odd constitutional arrangement between the state and the Church of England.

In good Anglican fashion, Theresa May wore her religion lightly, though she had no qualms about being seen regularly at church near her Berkshire home.

From the church of convenience came a prime minister of convenience, who seemed at times to believe that the principles of duty and public service alone were sufficient to hold back the growing storm in Britain.

May underestimated the forces ranged against her while drastically overestimating her own capabilities.

In the end, her stubborn commitment to hold the line between the Scylla of the ERG and the Charybdis of a People’s Vote has only furthered and deepened the crisis.

Now Theresa May’s role as Katechon is coming to an end there is no shortage of candidates for the role of Anti-Christ.

It is now highly likely the insurgent right-wing of the Tory party will get an opportunity to enforce its vision of Brexit upon the country.

Whether or not the EU or the opposition in parliament can stop them, the removal of ‘the restrainer’ has upped the ante in Britain’s Brexit drama, and will no doubt drive political polarisation to even greater extremes.

One should, however, bear in mind that by eternally deferring judgement on the crisis the Katechon may hold back the Apocalypse, but by doing so it also holds back the possibility of redemption.

Foucault once suggested that Clausewitz’s famous observation, “war is not merely a political act but a real political instrument” carried out by other means, be reversed, with politics made an extension of war. END_OF_DOCUMENT_TOKEN_TO_BE_REPLACED

Brexit will turn three on the last day of January, over six years since the 2016 referendum kickstarted Britain’s race to the bottom. END_OF_DOCUMENT_TOKEN_TO_BE_REPLACED

Be careful what you wish for. It may be a cliché, but it’s one the Greens are learning all over again. END_OF_DOCUMENT_TOKEN_TO_BE_REPLACED