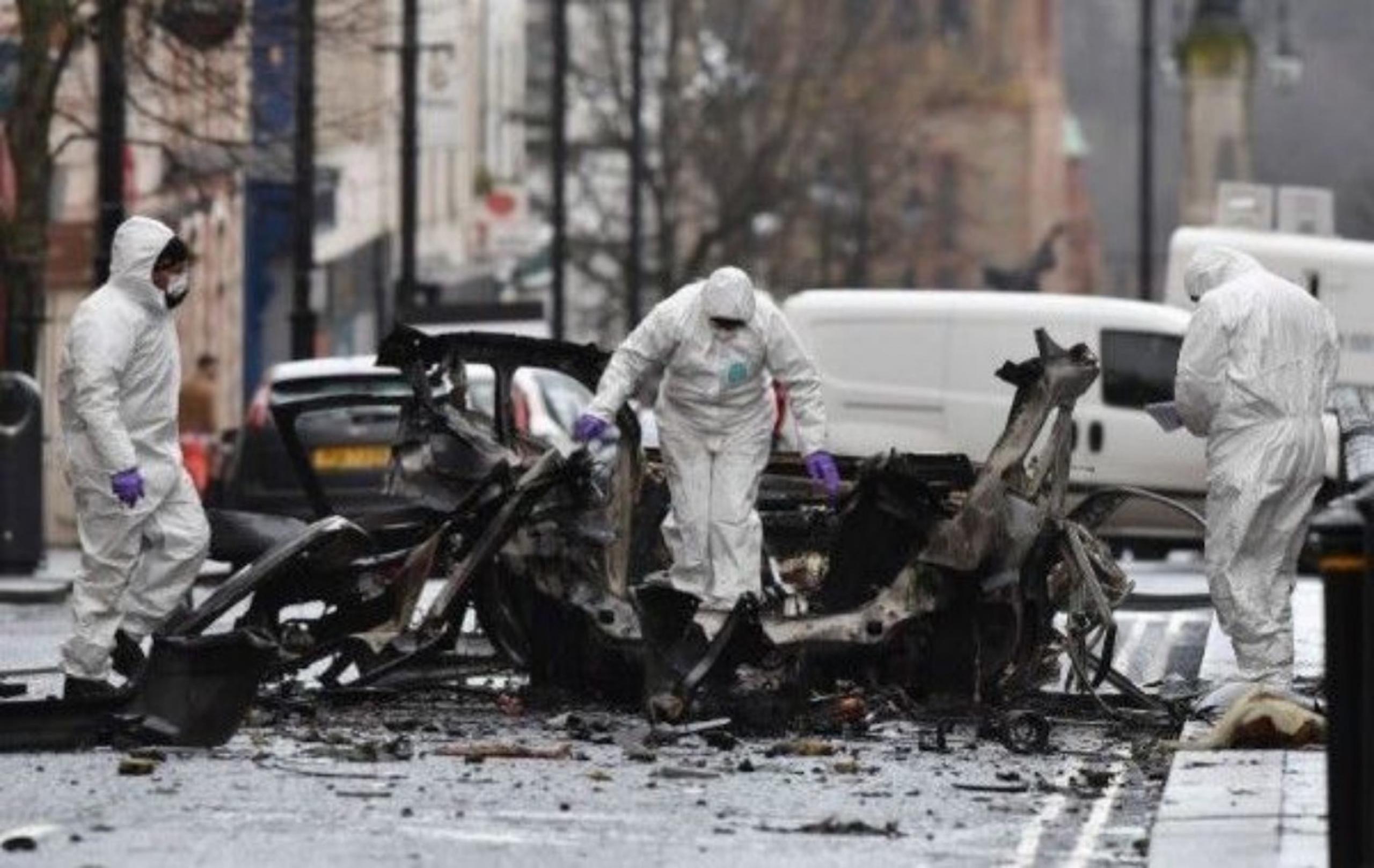 Crossing between Oregon and California is more of a hassle.

As an eleven-year-old growing up in the United States, I asked my parents what a “hunger strike” was when Bobby Sands was dominating American news.

Television images of a city at low-intensity war with itself still stick in my memory.

Belfast is now a tourist destination, with a cleaned-up centre and a shiny Titanic museum.

A booming trade in conflict tourism, largely conducted in hour-long “Black Cab” tours, an unofficial component of the stunted reconciliation process in the city.

I felt leery about adding Belfast to the itinerary for my June study-abroad class on 20th-century Irish literature.

Would it scare my students off? Would it be like adding Beirut or Baghdad, or Kabul or Grozny?

The oldest of my students was eleven when the Good Friday accords were signed, but most of the rest had no memory of Northern Ireland as a flashpoint.

The Maze, the Falls and Shankill Roads, the Provisionals and the UDA mean little to them. A visit to Belfast was neither a drawback nor an enticement.

By coincidence, the last time I’d taught this class was during the lead-up to the 2016 Brexit referendum, a poll that seemed silly at the time.

Leaving Dublin Airport for home on that trip, a student pointed out a billboard imploring the airport’s many British visitors not to leave the EU.

I explained that this was just a bit of Little Britain foolishness, no more likely to succeed than the Republican Party’s suicidal march to nominate Donald Trump for president.

It’s hard to believe that I was, that we were, that world-weary and knowing.

Brexit dominated the national conversation in our short visit there last month.

As we arrived, the Tories were winnowing down a field of candidates for the PM who would oversee this spasm of self-destructive petulance.

I didn’t come to Ireland, I thought, as RTE flickered in the background, to watch the shambling Boris Johnson, the supercilious Michael Gove, and the aging-star-studentness of Rory Stewart.

Ireland feels to me like the great green hope of Europe, a society that is getting ever better and more welcoming while the United States, the United Kingdom, Italy, and Poland are competing to make themselves as “low and dishonest”, to paraphrase the poet WH Auden, as they can.

The Irish in the Republic looked at looming Brexit with a complicated amalgam of apprehension, optimism, bemusement, and schadenfreude.

If it happens, Brexit will make Dublin the largest English-speaking city in the EU, and accelerate the flow of international business and capital there and other cities such as Cork and Limerick.

Government publications available at every post office aim to help people who are Getting Ready for Brexit.

Gentrification in Dublin is already well in progress, and Kerill, a recent Trinity College grad, grumbled to me that rents in the city centre are starting to near London levels.

I was more alarmed to hear someone refer to Dublin as “the Austin of Europe”, in reference to the booming, high tech-driven Texas college town.

A recent poll of Conservatives showed that strong majorities of that party’s voters are determined to get their Brexit even if it destroys their party and shatters the UK.

A replay of the failed 2014 Scottish independence referendum would likely swing the other way.

Republicans in the north, as well as many in Ireland itself, hope that the inconvenience to farmers and others outside of the Unionist enclaves in the cities could sour them on the UK.

Could Northern Ireland, cut off from the EU money that has helped it develop, vote to join the Republic?

Or would a hard border rekindle the Troubles and invigorate the Ulster Defence Association dead-enders and the New Irish Republican Army irregulars?

Tories like Johnson and Jacob Rees-Mogg dismiss the prospect of a militarised “hard border” as merely alarmism and even deny such a border ever existed in the past.

Tensions are palpably increasing, many in Northern Ireland told me.

Derry is of particular concern, after a January 2019 car bomb and, just in April, the murder of a young lesbian journalist, Lyra McKee, during a demonstration.

The “Real” or “New IRA” has admitted responsibility for both acts.

“None of us knows what’s going to happen. We’re all guessing,” Liam, our Dublin-based 50-year-old tour-bus driver, remarked.

“Brexit,” he opined, “is an opportunity for both sides to claim the vacuum.”

Furniture-store owner Kathryn, a British citizen recently moved to Dublin, was more sanguine about Brexit: “What will be will be… there’s nothing you can do about it.” “A united Ireland would be great,” she added, “but the south can’t afford the north.”

A south swollen with money fleeing the City might say differently.

Ciaran, a Belfast cabbie moonlighting as a driver for the Black Cab Tours of the still-separated Catholic and Protestant areas of the city, thought that Brexit was unlikely.

Laughing at the British, he guessed that they’d bring themselves to the brink, and then reel themselves back.

But if the decision is in the hands of Conservative voters, he’s likely to be proven wrong.

Brexit is bringing out the worst in the British and could potentially reignite the sectarian conflict in Northern Ireland.

But it’s inspired some remarkable recent work from journalists and television producers.

American journalist Patrick Radden Keefe’s gripping Say Nothing (the title taken from a well-known Seamus Heaney poem about living in Belfast in the 1970s) uses the story of one unfortunate woman in Belfast to unravel the history of the Troubles and their surprising afterlife.

Jean McConville, a mother of ten, lived in the Divis Flats housing complex in Belfast, whose 19-story tower still looms ominously over the Falls Road. Accused of being an informer for the Royal Ulster Constabulary, she was kidnapped by the Provisional IRA and disappeared in 1972.

McConville’s reputation tainted her children and prevented them from pushing for an accounting of her whereabouts.

When her body was discovered on a beach in 2003, the British government opened up a homicide inquiry that, eventually, exposed a secret oral-history archive held at Boston University implicating many of the central figures in the IRA and Sinn Fein — including Gerry Adams and Dolours Price, ex-wife of Stephen Rea — in the murder of McConville and numerous others.

As with the bones of the unfortunate Jean McConville, Brexit’s imminence has exhumed many of the memories of the Troubles.

Over the last two years, a number of remarkable commentaries have taken angular perspectives on the conflict.

However, they are not, like Radden’s book, about the Troubles; the Troubles are their backdrop.

The two most notable of these centre on teenage girls.

The Catholicism of the IRA and the harsh Protestantism of Ulster figures like Ian Paisley were united in their treatment of young women, who were forced to occupy traditional gender roles and pressured to discipline others who strayed out of their prescribed lanes.

Its unnamed characters “say nothing,” in fear of inadvertently disclosing an ideological position or knowledge of militant activity; only the paramilitaries have the confidence to speak and act freely. This culture of silence puts vulnerable women in an even more powerless position.

Cultural events in the island’s capital this summer have also acknowledged how this dynamic was hardly limited to Northern Ireland.

In June, Dublin’s Abbey Theater staged an adapted version of the Quebecois play The Unmanageable Sisters, set in 1970s Dublin, focused on how women enforced and perpetuated misogyny.

Earlier this spring, Dublin’s One Book, One City program belatedly celebrated Edna O’Brien’s 1962 novel The Country Girls — a novel once banned in Ireland because of its frank sexuality and savage depiction of Irish Catholicism.

Belfast has flourished in the years since the Agreement while Derry, Northern Ireland’s second city, languishes, making a teen gross-out comedy set in violent and grim 1980s Derry a perfect vehicle for the blackest of black humour. Beckett would approve.

The Derry Girls, broadcast on Channel 4 in the UK and Ireland and available on Netflix, is a favourite of this current flowering of Troubles-inspired writing.

Four unpopular high-school girls from an IRA neighbourhood reluctantly add a fifth to their group when a previously unknown cousin (who was supposed to be aborted) moves in with them.

The problem: he’s a boy, but he’s English, and so he can’t attend the boys’ school due to fears for his safety.

It’s the kind of show that finds humour in teens scrubbing the local chipper with mayonnaise instead of soap in one episode, and then in another debating whether they can let a cute Provo bomb-maker stow away in their car boot to escape to the Republic during marching season.

The first episode of The Derry Girls opens with the girls learning that their school bus has to be diverted when a bomb is found on their route. Discussing this episode with our driver, Liam, I was told how routine border checks during his youth targetted trucks and buses.

On one school soccer trip to County Antrim, he recalled, their bus was stopped for thirty-six hours while the UK border guards dismantled it in its entirety, looking for weapons. It was left to the driver and Liam’s classmates to reassemble the coach.

The border question came up for my group not fifteen minutes into our visit. We had flown into Shannon Airport, where two days prior President Trump met with Leo Varadkar, the Taoiseach of Ireland. Our barista was still starstruck at having served a cappuccino to Melania Trump.

In their, meeting Trump dismissed Varadkar’s concerns about the post-Brexit border.

“It will all work out very well, also for you, with your border,” the president informed the Taoiseach.

“We have a border situation in the United States, and you have one over here. I don’t think the border’s going to be a problem at all.”

As though to underline the surreal nature of the exchange, it’s worth noting that during this same meeting, Donald Trump indicated that Ireland is a part of the UK.

Some have suggested that this was just Trump trolling Varadkar, getting under his skin because he hadn’t acquiesced to meeting at Trump’s golf resort. I don’t think so.

Trump doesn’t calibrate his statements when he speaks to people he thinks are below his station. The president just speaks his mind and lets the chips fall where they may.

Brexit will turn three on the last day of January, over six years since the 2016 referendum kickstarted Britain’s race to the bottom. END_OF_DOCUMENT_TOKEN_TO_BE_REPLACED

Be careful what you wish for. It may be a cliché, but it’s one the Greens are learning all over again. END_OF_DOCUMENT_TOKEN_TO_BE_REPLACED

Before his arrest, Andrew Tate was just another influencer with bad politics. END_OF_DOCUMENT_TOKEN_TO_BE_REPLACED