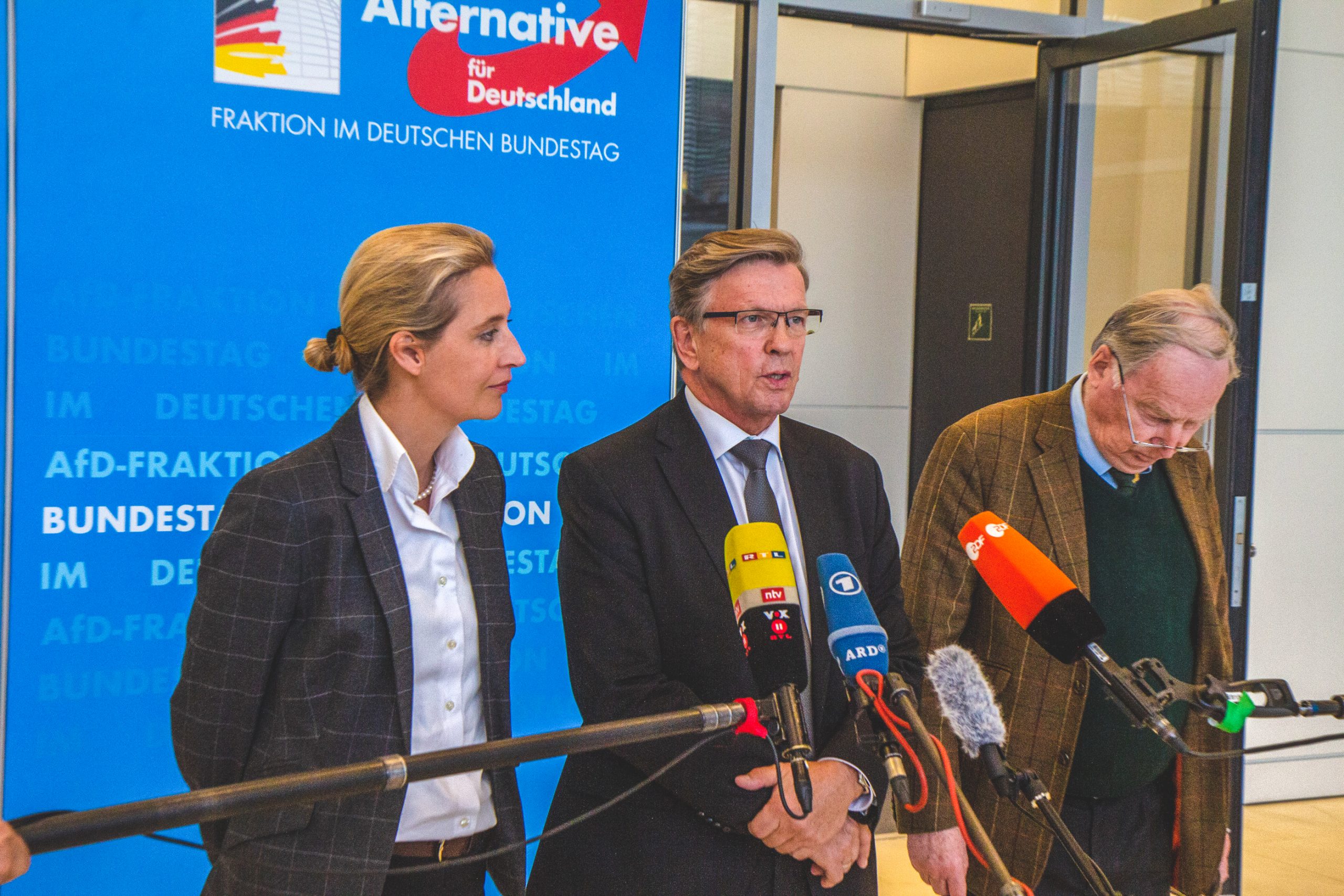 It didn’t stop there. National political leaders were targeted as well.

Former national Die Grünen (Greens) co-chair Cem Özdemir recently received an email purportedly from Atomwaffen Division Germany (AWDG) asserting that he was at the top of their “kill list”.

The email read, in part, “We are currently planning how and when we will kill you, at the next public rally? Or will we catch you outside your house?”

Fellow Greens politician and former national co-chair Claudia Roth received a similar email telling her that she was “in second place” on the hit list.

An International Network of Far-Right Terror

Atomwaffen Division (AWD) is a neo-Nazi accelerationist organisation that formed in the United States in 2015 and has been connected to at least eight murders since the spring of 2017, including the brutal Antisemitic and homophobic murder of Blaze Bernstein in January 2018.

The AWD is organized on a cell basis, which is to say that it operates in small, autonomous groups. This makes it difficult to say with any certainty just how many members it has. Estimates range from the mid-twenties to approximately eighty in the US. Nonetheless, their relatively small numbers belie their deadly potential and their global reach.

The Atomwaffen Division has adopted Oklahoma City bomber Timothy McVeigh as one of its role models and at least one member has been jailed for possession of bomb-making materials. The group has also made contact with various neo-Nazi organizations around the world, including the Ukrainian militia Azov Battalion. The AWD announced its expansion into Germany in July 2018. (Atomwaffen is a German word that means “nuclear weapons”.)

“Kill lists” are nothing new either in the AWD’s orbit or on the German far-right. Last spring, an AWD supporter assembled just such a list targeting journalists and activists after right-wing journal Quillette published an article (which has since been debunked) alleging that a number of reporters who cover the far-right are in fact covert anti-fascist activists. Several of the people on that list were subjected to violent online harassment thereafter.

In Germany, a “prepper” organisation now known as the Hannibal Network (it was led by an elite special forces soldier who used the code name “Hannibal”) was uncovered in 2017. Among the documents investigators found were plans for an apocalyptic Tag X (a German expression roughly equivalent to “D-Day”) as well as kill lists of left-wing politicians.

The ongoing revelations about the network have been an important development in German discourse about the far-right as they have helped expose the extent to which it is intertwined with the country’s military and police culture.

That, in turn, is a topic that has come under increasing scrutiny since the 2011 deaths of two members and the arrest of one other member of the Nationalsozialistischer Untergrund (National Socialist Underground, or NSU), a neo-Nazi terror cell responsible for at least nine racially motivated murders, the death of one police officer, and numerous other injuries across Germany.

The threats against Özdemir and Roth also arise in the wake of the murder of Walter Lübcke last June. Lübcke was a regional politician in the state of Hesse and a member of the centre-right Christlich Demokratische Union (CDU) but had become a target for far-right harassment after he declared his support for refugees at a town hall meeting in October 2015.

The threat against Mohring included a reference to the 2015 attempted murder of Cologne Mayor Henriette Reker, who survived a stab wound to her neck. Her assailant said he was motivated by anti-immigrant sentiment.

Public information as to what reasons, if any, AWDG may have cited in its threats against Özdemir and Roth has not been made public. But Özdemir is the son of Turkish immigrants and Roth is a high-ranking public official who identifies as a feminist.

These may form part of the logic behind them, given that AWDG had previously issued a blanket threat against Muslims in a Turkish neighbourhood and AWD members in the US have an established track record of misogyny.

The latest threats also come just weeks after an attempted attack on a synagogue in Halle on Yom Kippur. The attack failed in its explicit intentions. However, the attacker killed two bystanders nonetheless.

In the midst of this, the CDU caucus in the Berlin state assembly has announced a plan to combat left-wing violence, calling for an exit program, a ban on masks and weapons exclusively in “left-wing extremist strongholds” and accelerated prosecution.

The Thuringian election ended with a victory for Die Linke. The popular state leader will most likely retain his position. However, forming a government promises to be challenging.

The second and third-place finishers, the far-right Alternative für Deutschland (AfD) and the CDU respectively, won almost half of the votes between them and, while the Left, the Greens, the Social Democrats, and the CDU have each stated their refusal to form a coalition with AfD, the CDU has also refused to form a government with Die Linke.

The Thuringian elections came just under two months after statewide elections in Saxony and Brandenburg in early September. All three states are in the former East Germany. The fact that AfD did consistently well, coming in second in all three elections, while no other party won in more than one state has given rise to speculation that AfD may, in fact, be the strongest party in the region, if not the entire country.

This is despite the fact that leaders of the other major parties have to date effectively shut it out of power at the state and national level. However, this has not stopped the CDU in particular from working with AfD at the local level. Looking at all three recent state elections in aggregate, AfD, in fact, took more votes overall than any other party, slightly edging out the CDU.

The AfD leaders in each of the three states that have held elections since the start of September have become objects of widespread concern throughout Germany. All of them are leaders of the party’s radical nationalist “Wing” (a caucus within the party), which even some fellow party members have described as a personality cult around Thuringian party leader Björn Höcke.

In a book published in mid-2018, Höcke invoked what he called “national death [Volkstod] through population exchange,” a concept that is indistinguishable from the “great replacement” conspiracy theory that motivates much of the far-right violence that has arisen internationally in the past several years.

The party leader in the state of Brandenburg is Andreas Kalbitz, who has admitted to travelling to Greece with thirteen other neo-Nazis in 2014 to participate in a rally organized by ultranationalist party Golden Dawn. Kalbitz has more recently claimed that he attended strictly “out of curiosity” and that he no longer has ties to neo-Nazi individuals or organizations. However, the head of Germany’s nationwide domestic security agency has publicly stated that he is sceptical of that assertion.

Jörg Urban, the statewide party leader in Saxony, is a former Green who has since turned to radical ethnonationalism. He has been quoted as stating, for instance, that, “A people [Volk] can only maintain its own unity and freedom if it remains largely homogeneous.”

This is in keeping with the domestic security agency’s assessment of the Wing as a whole. In a report issued earlier this year, the BfV described the objectives of the radical caucus as, “an ethnically homogeneous people that should not be exposed to any ‘mixture’”.

Brexit will turn three on the last day of January, over six years since the 2016 referendum kickstarted Britain’s race to the bottom. END_OF_DOCUMENT_TOKEN_TO_BE_REPLACED

Be careful what you wish for. It may be a cliché, but it’s one the Greens are learning all over again. END_OF_DOCUMENT_TOKEN_TO_BE_REPLACED

Before his arrest, Andrew Tate was just another influencer with bad politics. END_OF_DOCUMENT_TOKEN_TO_BE_REPLACED