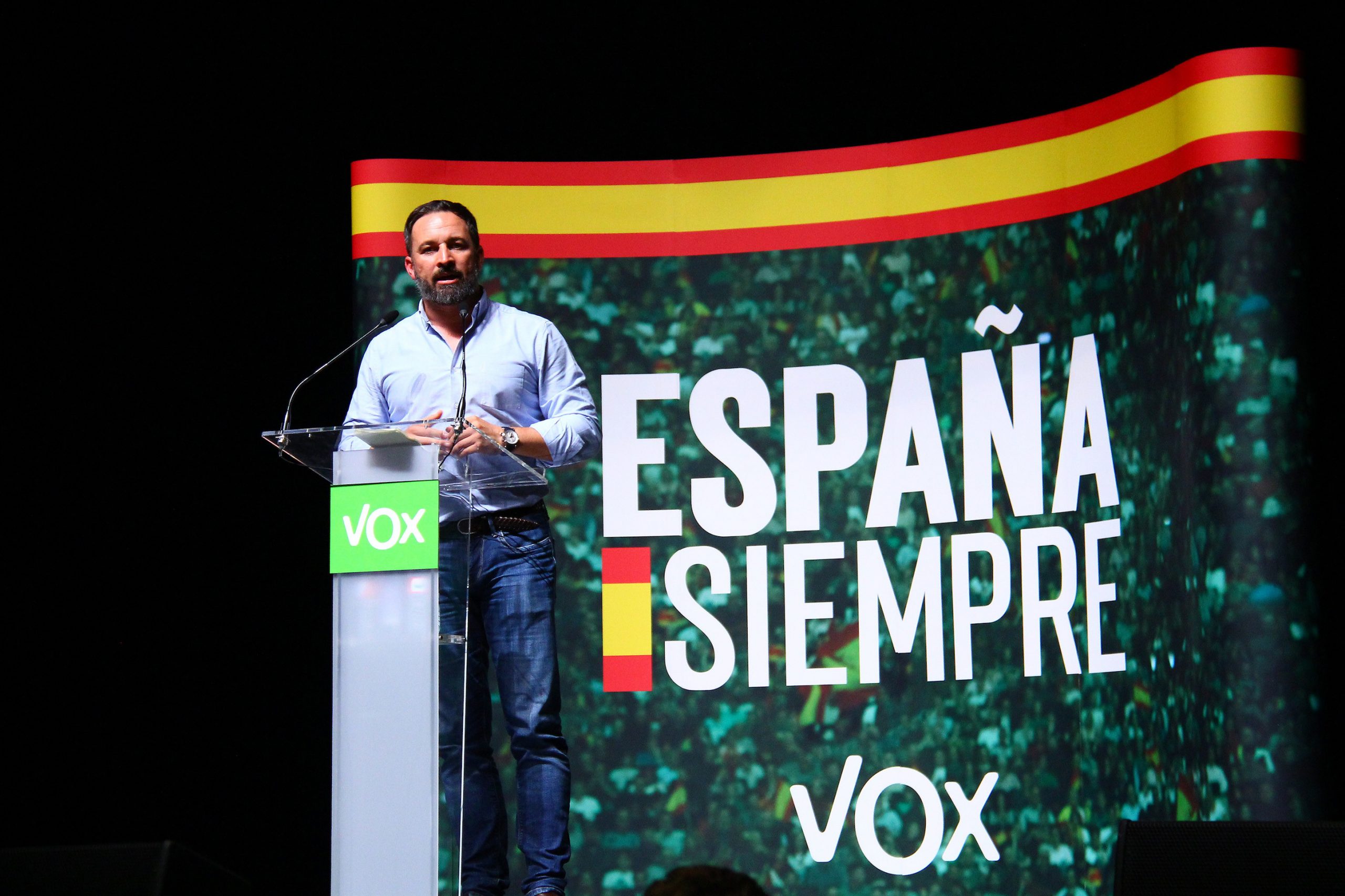 When the Partido Socialista Obrero Español (PSOE) won the April 2019 election and needed a coalition partner, it seemed inevitable that Unidas Podemos would join them, and create the kind of government no one thought possible in an era of populism. Though that coalition didn’t emerge until this last month, following yet another general election, its mandate is not quite what it might have been a few months ago.

It’s not the number of seats that both parties won that is the problem or the fact that they still have to invite other parties to finalise their coalition. It’s the emergence of the far-right Vox party that taints their victory. In the November poll, Vox jumped from 24 to 52 parliamentary seats, making it the third-largest party in the country. Worse, it received more votes than Podemos, which dropped from 42 to 34 seats.

Though Vox’s emergence makes political sense, its rapid growth was not as anticipated. In the first of a two-part interview, Battleground’s Maxime Sattonnay spoke with Berta Barbet, editor of the highly regarded Spanish journal Politikon, about Vox. Barbet explains its appeal to Spanish voters, and what Vox has in common with other far-right European parties.

Maxime Sattonnay (MS): How do you deal with populist movements which use fake news to influence policy debates?

Berta Barbet (BB): The problem is not whether the information they use is true, it’s the messages behind it. The reason so many people believe in fake news – even when an expert tells them it’s fake – is because the information aligns better with their mood than the information that media and politicians try to deliver to them. That’s key.

Why are these people so frustrated that they would rather believe a lie? What we have to do is understand why those emotions exist and why so many people believe that the system is not working for them. Then we should create new projects that would connect with these emotions, but differently, using better information that would help democracy and institutions instead of hurt them.

MS: So it’s about offering a new political project instead of trying to debate ideas?

BB: Exactly. What we have to do is give these people something they can believe in, something that we think is good for them. We have to create a new project because it’s quite obvious that they don’t trust the current one. We need to understand what those issues are and deal with their fears and their frustrations without having to follow the recipes of the extreme right.

MS: Let’s talk about the Spanish political landscape. What issue do you think Vox is answering in Spain?

BB: Vox is responding to something that’s been quite widespread in Europe: frustration with how politics has been working and how certain groups’ voices have not been properly represented for a while. In this case, it’s mainly those who want to protest against the weakening of Spanish identity and the Spanish national project or a perceived weakening of this project.

Vox’s (success) is very much related to the Catalan challenge and also to immigration. We’ve seen how when they start talking more about immigration, their share of votes increased. It seems like we’re dealing with very similar voters, usually, men from deprived areas who believe that their identity and their lifestyle is at risk. So they are trying to react to it by voting for someone who can and will strengthen it.

MS: What kind of project would make those fears go away?

BB: Well, first of all, we need some economic projects. We are talking about people who thought that they were going to do great because they were doing great before the 2008 economic crisis. They thought that the economy was working for them and then, suddenly, the crisis left them without proper jobs. Even their kids seem to struggle in the current labour market.

So what we need, first of all, are economic policies to develop these regions, to create jobs for people who are not necessarily the most educated. And then, obviously, the answer has to be something that understands how people need their identity to exist and how they need to feel included in something.

We cannot say “This is all about you and you have to just work hard” or “Who cares about being Spanish or from whatever region.” We have to give people the space to feel like their Spanish identity can coexist with others. We need to be more inclusive without getting rid of the notion of belonging.

Social psychology tells us that the feeling of belonging is one of the first needs of human beings. Sometimes our politicians forget this. We need to accept that people identify with things and that’s OK. But they must learn to coexist with others.

MS: How would you consider Vox, for example, in a German context: Would it be more of an AfD or a CDU?

BB: It would probably be quite similar to the AfD, although we still have to see how it evolves. Part of Vox’s membership is old male politicians who had belonged to the Partido Popular. Their political views are in line with what the extreme right used to be – very conservative, very much in favour of authoritarian ways.

But we also know that they want things to change, even if it’s not in the way progress is usually perceived. They want to protect borders, they want to keep the political system in certain ways. That’s probably more similar to the AfD. We will have to see what the final equilibrium is going to be.

So far Vox has been anti-feminist and very religious. That’s not been the case in all European countries, where the extreme right has (often) moved towards a more progressive view of society that justifies why they are against immigration because immigrants don’t share our European way of life (for example, women wearing the veil).

Vox has not done that but they are changing and they are clearly using techniques similar to those of other extreme-right parties. The AfD is more similar to Marine Le Pen’s Front National.

MS: Do you think that Vox has its own take on right-wing nationalism? Do they have their own Spanish recipe, or are they just a byproduct of foreign intervention, like Steve Bannon and Russia, in their efforts to destabilise European democracies?

But Vox has been working with Steve Bannon and they clearly have been using some of the knowledge generated by these forces that destabilize western democracies.

And so, some of the things that they have done and probably things they will do are comparable to what has been done in other places as well. When Vox feel that these techniques can work in Spain, for example on immigration policy, they will use this knowledge.

MS: Do you think minorities have to be worried by the growth of Vox?

BB: Yes. What happens when such groups reach power is that they limit the leadership of other parties that usually protect minorities. But they should be worried because mainstream parties will probably be shy about protecting minorities.

We could also see some paramilitary groups being empowered by Vox. We have already seen several cases of groups beating up immigrants and minorities. So in that regard, they have to be worried. And we should all be worried because we took in people who might be very vulnerable.

It’s not like all of this is going to happen tomorrow. Obviously, their rights will be protected until Vox has a majority in the Parliament.

MS: Where does Vox come from? Did it grow out of the right-wing of the Partido Popular?

BB: At first they mostly got votes from conservatives who thought that PP was not going far enough. But in November they started getting votes from Ciudadanos voters who believed that Vox offered a more modern alternative to PP.

So far, Vox doesn’t seem to have taken any significant share of votes from the left, but we have seen that with time this has occurred in other countries. We’ll see if that happens.

Photograph courtesy of Elentir. Published under a Creative Commons license.

Everyone’s going to Poland. Not just from Ukraine, but Western Europe. END_OF_DOCUMENT_TOKEN_TO_BE_REPLACED

In 1991, Fugazi released Steady Diet of Nothing, their sophomore full-length. Coming on the heels of the brilliant Repeater LP, Steady Diet, to some, felt anticlimactic. END_OF_DOCUMENT_TOKEN_TO_BE_REPLACED

Culture is never foreign. The more distant it seems, the more we find that it ultimately looks or sounds familiar. END_OF_DOCUMENT_TOKEN_TO_BE_REPLACED