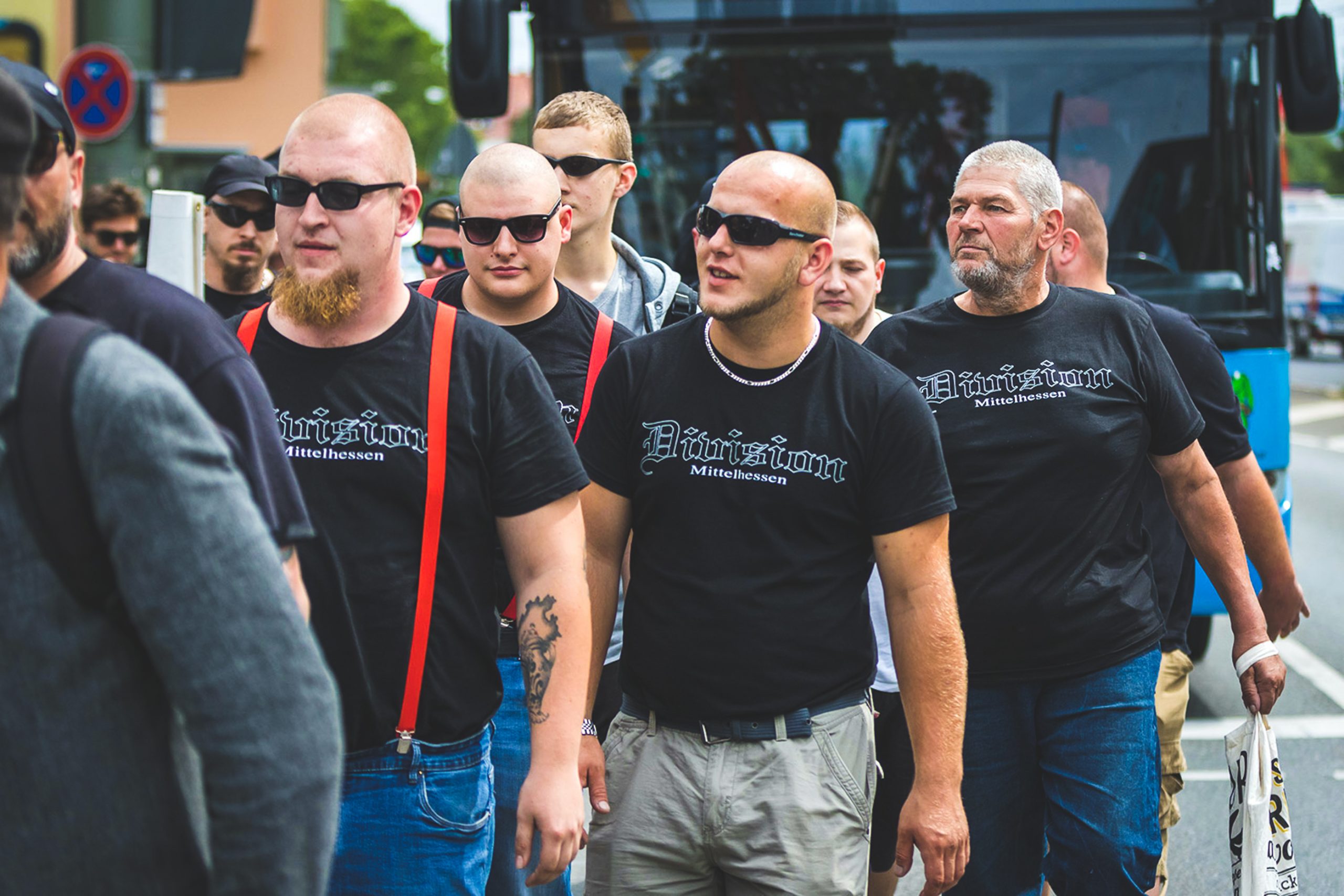 Examples just since Christmas include deadly, anti-Muslim pogroms and at least one shooting by a Hindu nationalist in India, plots by violent white nationalist cells to kill random strangers and anti-fascists in the United States, one mass shooting in Germany as well as a dozen arrests that prevented even more mass shootings at mosques across the country, and a self-identified Brazilian integralist group fire bombing a comedy troupe.

News reports generally present these incidents as isolated events or, at most, the work of networks that exist in relative isolation. This can make it difficult to comprehend such disparate occurrences as a cohesive phenomenon, despite the fairly widespread recognition that the perpetrators often share similar worldviews.

As a way of looking at how far-right ideologies become globally networked (and how this was true even before the Internet), two closely associated organisations which started in the UK, with roots going back to the 1970s, are archetypal examples: Combat 18, a neo-Nazi terror group launched in 1992, which was most recently banned in Germany in January  (it had already been designated a terrorist group in Canada), and Blood & Honour, an international music network started in 1987, which is banned in Germany, Spain and Russia and designated a terrorist group in Canada.

These groups created precedents which continue to resonate with violent, far-right actors internationally today, particularly those of the “lone wolf” variety like the terrorist responsible for the Hanau killings, Tobias Rathjen.

Law enforcement and political leaders have repeatedly failed to take adequate action to protect the general public from them, enabling such radicals to establish and maintain far-right networks across national, geographic, and linguistic boundaries.

Thugs With an Ideology

Combat 18 (C18) was founded in 1992 and, in the words of co-founder Charlie Sargent, was comprised of a group of “thugs who follow an ideology” drawn largely from the football hooligan scene and assembled to protect meetings of John Tyndall’s fascist British National Party (BNP) against disruptions by antifascist activists.

In a 1996 interview with author Nick Ryan, Sargent described the conditions that motivated him and his brother Steve in the group’s early period, stating that, “The Reds were going around and they were beating the living daylights out of the right-wing. … We decided we weren’t having that and we thought we’d do something about it.”

For Sargent, “doing something about it” meant that “We fuckin’ battered ‘em wherever we met until there was no fucker left standing. … Now we don’t see them no more.”

Within a year or two, the relationship between C18 and the BNP soured dramatically as party members grew frustrated by the growing leverage exerted within the party by its own in-house goon squad, often in the form of direct threats and intimidation by Combat 18 against British National Party supporters.

Moreover, while some BNP members wanted to pursue legitimacy via an electoral path by emphasising cultural difference rather than openly embracing biological racism (a strategy that had started to yield positive results for Austria’s Freedom Party under Jörg Haider and France’s National Front under Jean-Marie Le Pen), C18’s Nazi affinities were hardly a secret.

For one thing, the number 18 represents the first and eighth letters of the alphabet, which are, not coincidentally, the initials of Adolf Hitler.

Breaking its link with the British National Party did nothing to slow Combat 18 down, as they soon launched campaigns to intimidate migrant families into moving away (a tactic it would continue using until at least the late 2010s) as part of a strategy to establish white enclaves as power bases.

C18 effectively pioneered the concept of the “no-go zone,” which, in an astonishing yet all-too-common act of projection, has become a far-right buzzword for immigrant neighbourhoods where white people are allegedly unwelcome. In establishing whites-only areas, its idea was to carve out bases from which they could launch attacks elsewhere and eventually establish a white “homeland”.

As is often the case with militant far-right groups, they spent as much energy fighting each other their putative enemies.

The first major split in Combat 18 was between Sargent and his former right-hand man, former British soldier Will Browning. When Sargent and an accomplice murdered a would-be intermediary in 1997 by plunging a 20cm knife 22cm deep into his back, both killers were given life sentences.

Sargent was briefly furloughed in 2013 but was unable to live up to the terms of his release or keep himself from plotting revenge on his enemies in C18. So, back to prison he went.

During its UK heyday, Combat 18’s modus operandi involved targeting individuals and small groups for constant harassment, either as punishment for something they had said or done publicly or to extract a concession (e.g., getting migrant families to move out of a “white” neighbourhood.)

However, they have also been linked to bombings and murders, sometimes through their connections with loyalist paramilitaries in Northern Ireland.

By the time C18 was established, Blood & Honour (B&H) already had a few years of experience. It grew out of the National Front’s Rock Against Communism (RAC) shows, which began in 1979 in response to the Rock Against Racism concerts that had started the year before.

By 1987, several of the far-right bands had grown dissatisfied with the support they were getting from the National Front and its in-house music promotion crew the White Noise Club, so singer Ian Stuart Donaldson (who later dropped “Donaldson” from his name) of the skinhead band Skrewdriver co-founded Blood & Honour in the interest of establishing an independent network for promoting far-right and radical nationalist bands.

The new organization’s name had been the motto of the Hitler Youth, but was also used as the title of a 1985 Skrewdriver anthem.

Insofar as Ian Stuart’s ambition for B&H was to spread white power ideology while raising funds for other organizations with similar views, they seem to have largely fallen short on both counts in the UK.

But, according to a German anti-racist group, what Blood & Honour succeeded in doing, however, is “creating an organizational basis for the extreme right-wing part of the skinhead scene, making it more cohesive by organizing concerts, and driving ideological agitation through music”.

B&H bands had started building an international following at least from the time of the early RAC concerts and eventually established Blood & Honour “divisions” in countries across Europe as well as in the United States, Canada, and Australia. Their network distributed illicit and sometimes illegal cassettes and CDs in addition to organizing concerts (often under false pretence).

Not content to be the security squad for the BNP only, Combat 18’s early activities included similar duties for Blood & Honour. When Ian Stuart died in a car accident in 1993, however, C18 managed to do what it could not with the British National Party: it took over.

Its new venture in the neo-Nazi music promotion business made a lot of money for Combat 18, but that kind of profiteering was part of what drove bands to form B&H in the first place.

Resentment among the musicians grew and, naturally, a split in Blood & Honour was established by 1996, with one faction adhering to the original mission of spreading supremacist ideology through music and the other pushing for more radical and violent action, including “terrorism and assassinations”.

That carried over into its US divisions, with two competing factions claiming to be the legitimate heirs to the B&H name.

C18’s international outlook was manifest early on when they adopted a “leaderless resistance” approach. The idea first gained popularity through the racist 1978 novel The Turner Diaries by American neo-Nazi William Luther Pierce.

It was then codified for white supremacist organizations in an essay by Ku Klux Klan leader Louis Beam and converted into action by Turner-inspired terrorist group The Order (aka the “Brüder Schweigen,” or the Brotherhood of Silence), a small cell of white supremacists that operated in the northwestern United States in 1983-84 and was responsible for the murder of radio talk show host Alan Berg.

According to the C18’s rather obviously-titled National Socialist Political Soldier’s Handbook, “groups without leaders and no central command structure or organisation are much harder [for law enforcement agencies] to keep track of,” while the Blood & Honour Field Manual cites American neo-Nazi theorists of leaderless resistance and Scandinavian “lone wolves”.

The B&H manual specifically refers to The Order, as well as Combat 18, as exceptional examples of organisations that carried out well-planned, revolutionary attacks.

C18 also adopted a practice of what it called “covert political action”, meaning infiltrating other right-wing groups in order to poach members or take over an organisation. Former members have continued using that approach right up until the last few years.

The neo-Nazi music scene isn’t the only vehicle for international trade in white supremacist ideology. Religion is also a useful unifying tool across national boundaries. Many ethno-nationalists look to a mythologised past to construct a form of neo-pagan ancestor worship or adopt Christianity as a bulwark against the corrosive influence of modernity.

However, Nazi Satanism has also had a growing influence in international far-right circles since the 1990s. This, too, has a strong link to Combat 18, primarily in the figure of David Myatt.

Myatt was born in 1950 and showed a predilection for Nazi ideology early on. He also turned to the “left-hand path” at a young age, regarding it as embodying an outsider’s perspective in permanent opposition to modernity. He believed that Satanism and National Socialism as not only compatible but intrinsically linked.

In Myatt’s eyes, National Socialism is the only real theory in existence, since it is based solely on the highest ideals of honour, loyalty and duty, championed over and above selfish individual pursuits. It calls for a revolution of the soul; a “Triumph of the Will”; a return of racial pride and defiance. In a very important sense, National Socialism is contemporary paganism.

Myatt was a member of Combat 18 in the 1990s and, in the words of researchers from the UK’s HOPE not hate, he saw it as his job to “turn the C18 stormtroopers and Blood and Honour skinheads into fully conscious Aryan warriors”.

At the time, Myatt was also a leading member of the Order of Nine Angles (O9A), a Satanic cult dating back to the 1960s.

Whether or not it was O9A’s intention to adopt C18’s infiltration and subversion tactics, it nonetheless worked its way into a position of influence within the notorious North American neo-Nazi terror group Atomwaffen Division as well as its affiliates (e.g., “Sonnenkrieg Division” in the UK and “Feuerkrieg Division” on the European continent and the United States).

By the time the 1990s came to an end, Combat 18 in the UK had been ground down by infighting and prison, although its decentralised structure has allowed anonymous perpetrators to engage in low-grade acts of community intimidation under the C18 name ever since.

However, its association with Blood & Honour became so close that, by the turn of the millennium, it was often difficult to know where one organization ended and the other began.

B&H still organizes concerts and the violent reputations of both groups have given them a quasi-mythological status among young neo-Nazis. That allure is part of what drew in the German fanatics who would become known as the National Socialist Underground (NSU).

Over the course of its thirteen-year campaign of murder and bombings, the NSU’s three core members are believed to have been supported in large part by the Blood & Honour network.

The conflict between Russia and Ukraine continues with no end in sight. END_OF_DOCUMENT_TOKEN_TO_BE_REPLACED

Some websites make the news, others make headlines. END_OF_DOCUMENT_TOKEN_TO_BE_REPLACED