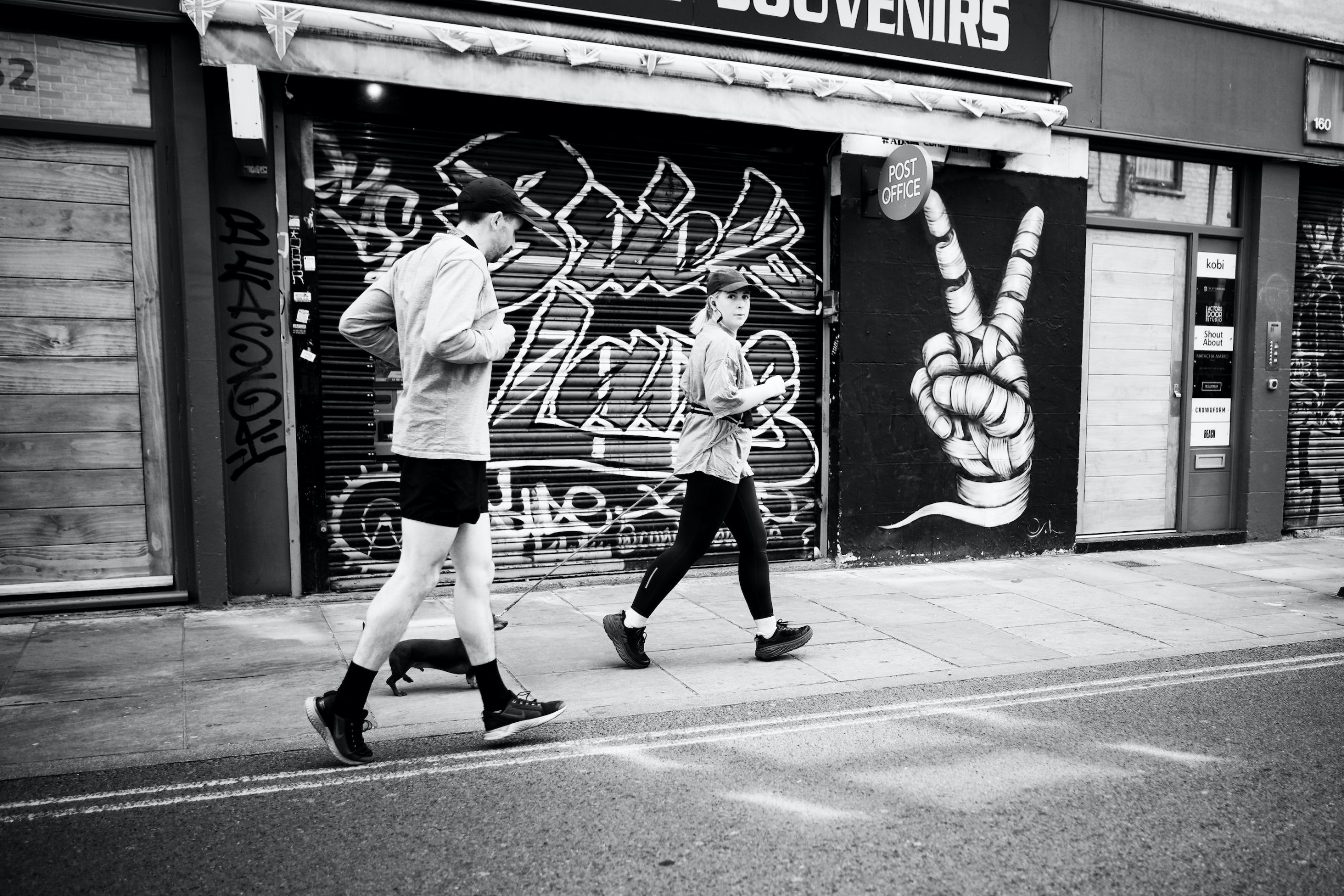 The only thing they can do is run. London, 8 May.

I’m able-bodied and can exercise every day if I want. And most of all I’m still working, and in a relatively safe environment.

More than that I’m contributing towards the development of a vaccine for coronavirus (or SARS Cov-2 as it is listed on our technical documents).

It’s an odd experience amid this world-historical event to hear of projects you’re involved with discussed on the radio. To hear that arrogant right-wing blowhard Nick Ferrari interview someone whose name you’ve seen on internal emails.

I don’t envy people shut into their homes all day with only a short trip to the shops or local walk to break up the monotony. In truth, the weekday routine between work and home is monotonous enough. Without trips out into the city, it’s all blurring into grey on grey.

I miss the technicolour of Soho and Dalston, of the crowds in the West End, hipsters and un-hipsters, even the tourists at the Tate and British museum. I even miss the smells of public transport.

Isn’t that strange? I’d never thought about how the underground smells before. But now I haven’t been on it for nearly seven weeks, I’m struck by the absence of that sooty, metallic, vaguely burning smell which mixes with the odours of the people who you squeeze up against; eyes fixed to floor, ceiling or phone.

Never risk meeting the gaze of others, not in-between stations anyway.

There are undoubtedly people in this city for whom the daily commute forms the most intimate experience of their lives. I wonder if they miss it the way separated couples yearn for each other’s bodies?

Cycling out West I reach the river at Hampton and head out towards Chertsey. It’s striking how the character of the built environment changes once you get beyond Hampton Court as if it functions as some ancient boundary marker or invisible checkpoint. On one side metropolitanism, on the other, “Gammon country“.

It’s also Ballard country. Weybridge, Addlestone and Chertsey, Byfleet and New Haw; a network of satellite towns around the Western expanse of the M25 where JG Ballard set his final novel Kingdom Come. Brooklands, where the doyen of dystopian fiction located the shopping mall around which much of the novel’s action happens is a real place and home to a large retail park.

That’s as far as the similarities go, however, as the book’s evocation of “St George’s shirt” wearing street gangs, sports obsessives, and race riots is fanciful in the extreme to anyone who has visited these places.

Ballard makes this dullest of suburban enclaves sound far more multicultural than it actually is. Cycling through Weybridge or Shepperton (where Ballard lived in a non-descript semi-detached house) you’d be fortunate to see any non-white faces on the street.

As I cycled over Chertsey bridge a middle-aged white man, his face partially covered with a scarf was standing at the kerb wagging his finger furiously at the few cyclists who were passing. “You’re only allowed out for an hour, yeah!”

This was his admonishment to the lycra-clad hordes surging over into Surrey like Visigoths in homoeopathic concentrations that Sunday morning. He looked like he’d been there a while.

There’s a libidinal economy at work in following rules, a rather sad pleasure in submitting yourself to the other’s demands, regardless of whether the other is bothered or not. The psychoanalysts know this well. Masochism is an extreme variant; the self-flagellating monk always gave a couple more thwacks of the whip than was strictly required by the demands of penance.

Stalinism and modern managerialism continue the tradition in their own ways, fluffing up the superego, garlanding the cop inside your head. It’s a matter of anticipating the demand and then punishing yourself a little more.

Since the lockdown, this tendency has become a real dividing line between people. You can quickly gauge which side of it a person is on as you pass them in the street. Two meters just isn’t enough. I’ve seen people trying to squeeze themselves into cracks in the walls at twelve paces away. I see large anxious men out jogging, suffocating beneath dust masks while they work off the effects of a 24hour Pringles binge.

Out in the suburbs, I observed quieter streets, fewer people exercising, more obedience, and a heightened feeling of being watched. Lockdown has validated tendencies that are quintessentially “little England”. The edgelands of West London are a natural breeding ground for radical curtain twitchers; people who call radio shows to demand the army shoot sunbathers in Hyde Park.

During the first two weeks of the lockdown, I seriously contemplated putting in a request to be furloughed from my job. Even though I was employed I felt obsolete, cocooned in a routine that was a little too close to normal but without any of the things which break up “normal” and render it tolerable, i.e. the excesses. Most of all those excesses shared with others.

I had in mind to volunteer as a porter at West Middlesex hospital. I’d been a porter a Kings College Hospital, Lambeth (where I was born) for several months before I went to university.

I remember it as a rather rewarding occupation; dashing around delivering pharmaceuticals to wards; roaming the hospital’s vast Victorian basement and running up six flights of stairs carrying twenty kilos of intravenous fluids to the liver failure unit. That was a grim place.

I also had this image of Ludwig Wittgenstein working as a porter at Guys Hospital, London Bridge during the Blitz. It was typical of the man, who during his military service in WWI would demand to be sent to the most dangerous and disease-ridden posts on the Western and Russian fronts, despite apparently being eligible for a medical exemption that would have kept him away from the action entirely.

The philosopher evidently felt a desperate need to test himself, to find out if he was worthy of living. It’s an ethic I deeply admire.

There’s a blue plaque at Guys (at the part that’s now Kings College Student Union), close to the statue of John Keats, which commemorates the Austrian philosopher’s contribution. I’ve felt a bit more useful since I’ve been working on vaccines for the present pandemic. Essential work, but behind the front lines.

I’ve been reading a lot of “down and out” literature during lockdown; Knut Hamsun, Charles Bukowski. It’s the OUT part that’s attractive right now. A great deal of Hamsun’s Hunger takes place on the streets of his fictional city, Kristiania. I find myself envious of characters in novels who enjoy chance encounters while out Flâneuring. It’s an experience which the surrealist André Breton called “the Marvellous“.

Right now there is little marvellous about being around other people out of doors. They cower, shrink and avoid eye contact. Either that or they ostentatiously barge through sending the fearful scurrying into corners.

The great surge of public feeling towards health workers is not mirrored in the everyday experience of shopping for groceries. At the supermarket – which is now marked out like a cross between a military exercise and a Japanese gameshow – people do not speak, nor do they linger to peruse the inessential items on the shelves that once captivated them. Alcohol is an essential item. Especially alcohol.

Face coverings are becoming more common and with them an increasing sense of distance and alienation. Seeing the faces of other people is closely linked to a feeling of shared ethical experience, as the Jewish philosopher Emmanuel Levinas once wrote: “the facing position, opposition par excellence, can be only as a moral summons. […] The epiphany of the face is ethical”.

Combine this creeping ‘covering-up’ with the suspicion that what lurks beneath the veil is contamination and potential death for you and your loved ones, then the suggestion that the pandemic will lead to the rediscovery of “real life” encounters away from digital mediations sounds like fools hope.

I don’t suffer from the agoraphobia that has taken hold of otherwise reasonable people lately. While I follow the guidance for social distancing, I bend the stick where my sanity and sense of autonomy require.

Exercise once a day? No problem, how’s an 18-mile walk to Battersea and back sound to you? How’s 50km on the bike up to Finsbury Park and back? Throw in a loop around Kensington for good measure. London streets are rarely this empty and safe, so why pass up the opportunity.

In the long run, stick bending is better for your health than cowering under the bedclothes with the miasmas. One’s immediate response to the imposition of a rule – especially when that rule comes from government – should not be to obey but to interpret.

We are all jurists in the court of our own reason. Improvising around rules, as opposed to blind obedience, is what distinguishes adults from children.

Adapted from From the Corona of a Fading Star: Lockdown Musings. All rights reserved. Photograph courtesy of Nickolay Romensky. Published under a Creative Commons license.

Brexit will turn three on the last day of January, over six years since the 2016 referendum kickstarted Britain’s race to the bottom. END_OF_DOCUMENT_TOKEN_TO_BE_REPLACED

Be careful what you wish for. It may be a cliché, but it’s one the Greens are learning all over again. END_OF_DOCUMENT_TOKEN_TO_BE_REPLACED

Before his arrest, Andrew Tate was just another influencer with bad politics. END_OF_DOCUMENT_TOKEN_TO_BE_REPLACED