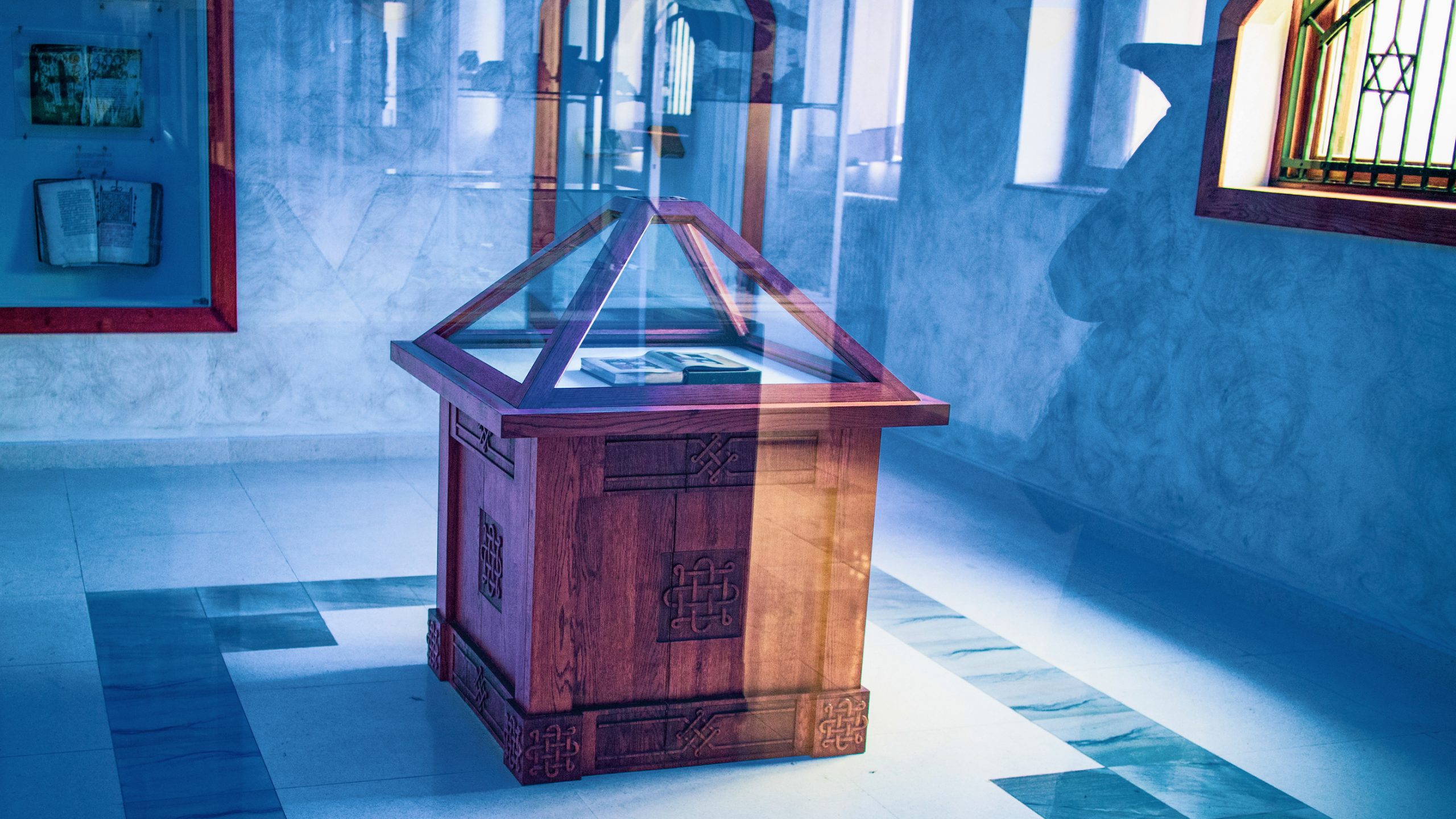 Its home is the National Museum of Bosnia and Herzegovina, which the Haggadah has had to leave several times in order to be preserved.

The Haggadah is a written collection of religious precepts and traditions used to mark Passover, the holiday that celebrates the liberation of the Jewish people from Egyptian slavery. Jewish families traditionally read Haggadah texts during Passover, which means that there is a relatively large number of such books. The Sarajevo Haggadah is probably one of the most famous of them.

The National Museum of Bosnia and Herzegovina notes that the Sarajevo Haggadah was written in Barcelona around 1350. Because of the persecution of Jews in Spain, it travelled around Italy in the 16th and 17th centuries, as notes in its pages attest, before arriving in Bosnia and Herzegovina at an unknown point in time before the end of the 19th century.

The Sarajevo Haggadah contains unique figural depictions and is the only Haggadah from that era that has been preserved in its entirety.

“The Sarajevo Sephardic Cohen family, due to a bad financial situation, decided to sell their Haggadah. At first, they offered it to various Jewish associations, but nobody could afford it. Since the National Museum was founded by the Austro-Hungarian government, it had enough funds to redeem it, and so in 1894, it bought the Haggadah for a sum of 150 crowns. We still have the purchase agreement in our documents,” says curator Lejla Bečar.

The Haggadah was then sent from Sarajevo to Vienna for analysis and returned to Bosnia and Herzegovina after a few years.

Then, in 1941, Nazi Germany occupied Bosnia and Herzegovina and, with the help of the puppet regime the Nazis had installed in Croatia, perpetrated the Holocaust against Bosnian Jews. Over the following four years, 10,000 Jews were killed in Bosnia, out of a population of 14,000. Bečar explained what happened with the precious book during that time:

“German military forces were collecting Jewish art throughout Europe to form a museum of a perished civilization. Sarajevo wanted the Haggadah exclusively. Curator Derviš Korkut – a learned man – was in charge of it. When the director of the museum at the time, Joza Petrović, informed him that the Germans had arrived, he hid the Haggadah in his trousers and said that they had handed it over to another officer that morning. The Germans went to look for that officer, who had been created in the minds of Derviš and Joza, while the two of them stayed to think about what they would do with the Haggadah.”

Korkut, at great risk, hid the Sarajevo Haggadah in a mosque in a Muslim village in the Bjelašnica Mountain, where it remained until the end of World War II. Afterwards, it was returned to the National Museum in Sarajevo.

The Sarajevo Haggadah was again at risk during the siege of Sarajevo (1992-1996). The National Museum found itself on the front lines of the war and suffered severe damage. Along with many other valuable items, the Haggadah was transferred to the National Bank’s vault, where it remained until the end of the Bosnian War.

The Sarajevo Haggadah has survived the Inquisition, two world wars, and the war in Bosnia and Herzegovina. “It has Bosnian nafaka (blind luck),” says Bečar.

For Luka Bošković, a longtime volunteer at the National Museum, while Bosnia and Herzegovina’s cultural wealth is invaluable, younger Bosnians have little awareness of Haggadah’s importance.

“On the museum’s birthday and for European Museum Night, I see the same friends who sometimes manage to bring some other people. Young people have no inclination to go to museums,” he says.

His advice for young people is the following: “When visiting the National Museum, take a better look at the exhibits, read the inscriptions and mention on social networks what [you have] read and learned during that visit. Don’t ever rush those things like we’re used to rushing through our whole lives.”

The Sarajevo Haggadah, one of the most valuable and unique items in the collection of the National Museum of Bosnia and Herzegovina, has been publicly exhibited only on very rare occasions before 2018 — usually on Passover and the museum’s birthday — for lack of appropriate conditions.

Thanks to funds by the French Embassy at Bosnia and Herzegovina and UNESCO, the Haggadah is now exhibited twice a week, on Tuesdays and Thursdays from 12:00 p.m. to 1 p.m., as well as every first Saturday of the month during the same time slot. In addition to that, the museum provides special visits with experts.

This story by Adelisa Mašić was originally published on Balkan Diskurs, a project of the Post-Conflict Research Center (PCRC). An edited version is republished by Global Voices as part of a content-sharing agreement. This article appears with their permission.

Not every media organisation can bear criticism, even self-criticism, but others require it to keep going. END_OF_DOCUMENT_TOKEN_TO_BE_REPLACED

Foucault once suggested that Clausewitz’s famous observation, “war is not merely a political act but a real political instrument” carried out by other means, be reversed, with politics made an extension of war. END_OF_DOCUMENT_TOKEN_TO_BE_REPLACED

Brexit will turn three on the last day of January, over six years since the 2016 referendum kickstarted Britain’s race to the bottom. END_OF_DOCUMENT_TOKEN_TO_BE_REPLACED