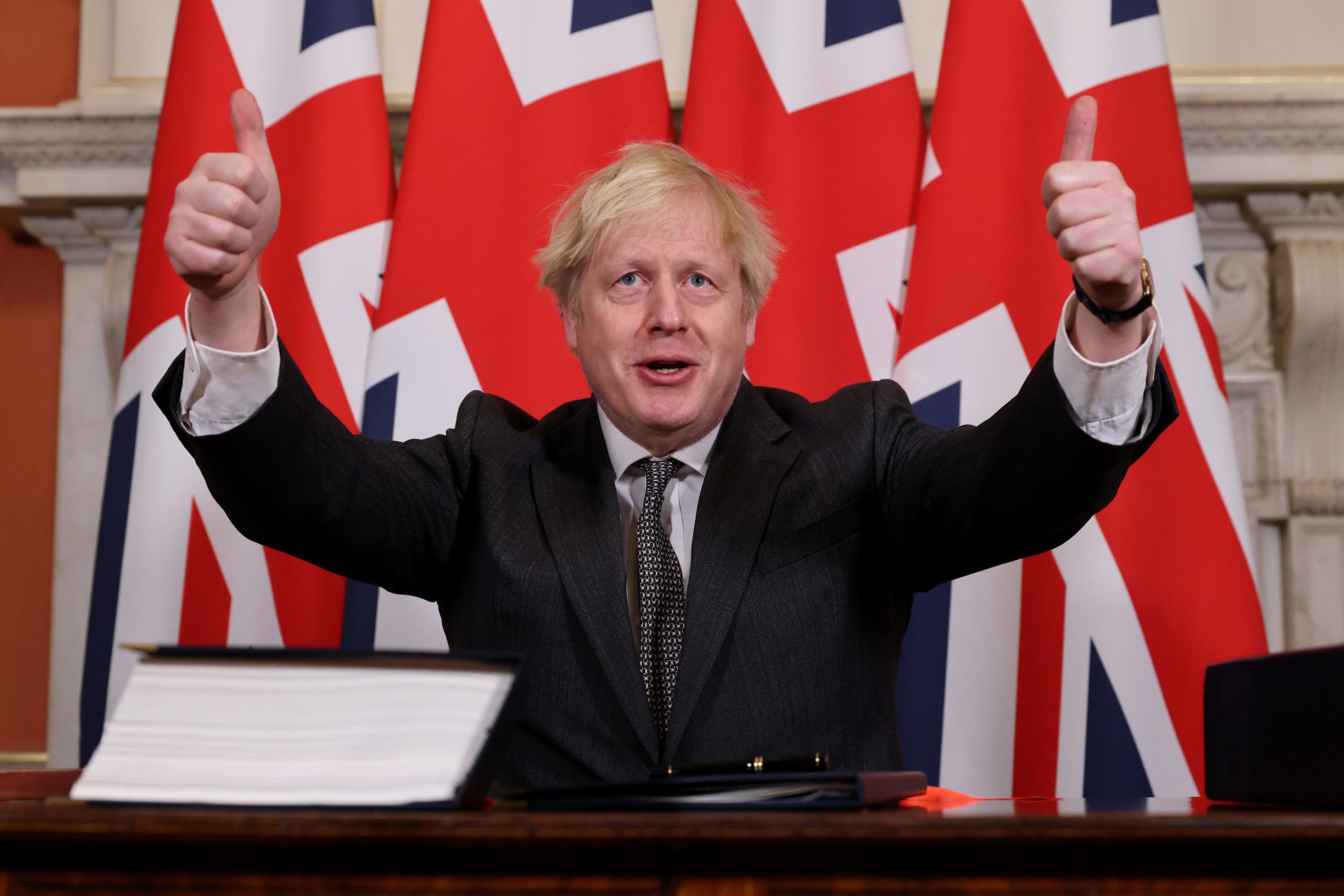 My editor recently touched a chord when I told him the years of Brexit, months of COVID incompetence, and the recent spectacle of Conservative MPs’ justifying not feeding hungry children had left me feeling disorientated.

His comment was perceptive: “Countries make up our entire fibre. No matter how far away we are from our home, their borders determine our own, in every way, however problematic. When they come undone, we come undone too.”

Have we Brits been living a lie? Content to inhabit the patriotic dreamscape that Danny Boyle conjured for us in the 2012 Olympics?

Looking back on the ceremony, signs of national delusion were there: the Shakespearian pastoral idyll, the achievements of the industrial revolution, with benevolent bosses and happy, toiling workers, healthy children jumping for joy on giant National Health Service beds, and the Caribbean ‘Windrush’ generation being accorded a warm welcome.

All things we could be proud of, but which actually papered over the cracks and faults of British history and society. Only the moving tribute to victims of terrorist attacks brought us, momentarily, back to reality.

The appointment of family, friends, funders and assorted Brexit backers to the House of Lords by Boris Johnson is a moment of awakening.

It has become clear for all to see that meritocracy and honour have been eclipsed by cronyism and hypocrisy. How could we have allowed it to happen?

For me, it crystallises an awareness that had been growing since the Brexit referendum, that things were not and perhaps never had been as they seemed.

December 17, 2020. Lord Lebedev of Hampton & Siberia takes his seat in the House of Lords. pic.twitter.com/lqnp8NWvfL

The appointments gave me pause for thought and took me back to my first days in the Foreign & Commonwealth Office (FCO) with the graduate intake of 1987, which included a Viscount and an Earl.

During our induction course, I was seated next to the Viscount. On learning that we had both studied Russian, he appeared at first delighted but then disappointed that I didn’t personally know Count Nikolai Tolstoy (the UK based relative of 19th Century Russian writer, Leo Tolstoy).

Naturally, I had read the author’s works and would have happily chatted, but my new colleague and neighbour didn’t deign to speak to me again.

At the end of our two week training period, as Russian speakers, we were both assigned desks in the Soviet Department. He in the bilateral policy section, me to my delight, the human rights desk.

We didn’t mix but our paths crossed from time to time. Notably, when his training visit to Moscow was waived through, whilst mine to the Vienna-based Conference for Security and Cooperation in Europe (CSCE) was turned down (I got it reinstated by asking why we were being treated differently).

We met again in 1989, at the British Embassy in Paris, when I was attending a multilateral CSCE conference on human rights. It was a month-long meeting of 35 countries, aimed at according greater freedoms to citizens of the Soviet bloc, many of them now EU citizens.

The conference coincided with the 200th anniversary of the French revolution and took place just months before the fall of the Berlin Wall. It was a historic moment.

The Viscount explained breezily that he was on secondment to ENA, the National School of Administration (France’s top school for civil servants) out at leafy Fontainebleau and had only come to the embassy to collect his post. He confessed to mostly spending his time horse riding.

In those early induction days at the FCO, I noticed another intriguing nameplate. The Earl of St Andrews sounded like a Scottish title, rather like that of another diplomat of the time, The MacLaren of MacLaren. I thought it somewhat affected.

In fact, the Earl was a likeable though rather shy character, who had a bit of a stammer. I resolved to put him at his ease. When I asked in conversation which London desk job he had been assigned, he seemed embarrassed to admit he was going directly to the UN in New York.

I asked naively: how did you get that assignment?! To which one of my new colleagues jabbed her elbow in my side, and explained afterwards that he was a cousin of the Queen.

The Earl was trying the diplomatic service for size and so it seemed was not subject to the usual selection or training process.

We didn’t come into direct contact again. But I did follow the Earl’s progress, both metaphorically and literally.

The next autumn I was asked if I would like to go to the UK Mission in New York, to help cover the annual UN General Assembly when all the world’s leaders gathered. And so I found myself taking up the same role that the Earl had occupied the year before.

My stint at the UN was truly a world education, reporting on the assembled leaders’ speeches, observing how allies and regional blocs operate and generally learning how global geopolitics works.

Foreign office wants you to believe it’s been a constant supporter of the UN. It’s put out 11 tweets on this in past 24 hours, for 75th anniversary.

In fact, there’s a long history and present of the UK defying the UN when its interests are threatened. Media rarely mention this. https://t.co/pTVj2z83IK

In our first year, the Earl returned to take up a job in the East European Department. His father came to visit and we in the Soviet Department were told to tidy our desks. I remember thinking how uncomfortable that must have been for him.

The Earl spent another three months in a Central European embassy, before leaving the diplomatic service at the end of the year.

We learned later that he had married a Canadian academic and Catholic divorcée, thereby giving up his right to royal succession.

I was happy that he had followed his heart.

Were there other examples of inherent privilege? Of course. I recall asking the head of the FCO on our last training day why there were only a handful of women ambassadors and why it took so long to get promoted.

The reply: Until 1972, women who married had to resign from the diplomatic service, so a few female ambassadors was actually progress. I learned much later from a male colleague that he couldn’t believe I had dared to ask the question.

But it wasn’t boldness. I simply couldn’t understand how it was so.

Of course, I had tremendous opportunities for a graduate in her twenties: postings to the UN and Moscow, aid trips to earthquake rocked Armenia and scientific trips to still closed Siberia, supporting prime ministerial and royal visits to the Soviet Union, as well as British astronauts on the first joint UK-Russia space mission.

Now, when I look back to those years, I find many of my graduate intake are serving ambassadors around the world. They have worked hard to master the politics, languages and cultures of their host countries and do a remarkable job. But I also realise that some things were simply preordained.

The Viscount sits in the House of Lords as a hereditary Peer, by birthright. He didn’t have to do anything to get there. It was his destiny. I had no inkling that his path was marked out whereas mine depended on merit at the time I met him.

But perhaps more striking to me is the MP I observed giving an unimpressive speech in the House of Commons in the 1987/8 parliament.

He made a splash on Twitter recently, lauding Brexit with a full-size cardboard cut-out of Margaret Thatcher. He is still on the backbenches after more than 30 years. and doesn’t appear to have changed a bit.

It makes me wonder how politicians can represent us effectively, when they occupy the same role for so long, whilst their constituents are subject to the vagaries of increasingly insecure work.

Whilst Margaret didn’t live long enough to see this day, I am sure that she is rejoicing in heaven.

At last we ‘got Brexit done’! pic.twitter.com/5CfvbpzukX

Progress has been made of course. There are more women MPs and greater ethnic diversity than before, though recent accusations of bullying and sexual abuse indicate there is clearly still a problem with outdated attitudes and unacceptable behaviour.

There are also now more women ambassadors (60 at the last count) in the Foreign Office. And there are openly LGBTQ  diplomats and same-sex couples. Being gay was deemed a security risk and a sackable offence until the 1990s.

That’s definitely change for the better, which reflects society at large. But there is still entrenched privilege in the upper echelons of UK society.

The current Johnson government exudes the very British phenomenon of public schoolboy entitlement. Recent grace and favour appointments to the House of Lords only serve to worsen a political system that needs urgent reform.

The question is are we seeing the last hurrah of the ‘male, pale and stale’ patriarchy in the face of inevitable change, or are the vestiges of empire and their modern-day wannabes tightening their grip?

Whilst I fear the latter, I hold out hope that we are witnessing such flagrant abuse of privilege and power that it cannot sustain. The house of cards must fall.

The immediate challenge, however, is to stop the current government bringing the country to its knees, whether through incompetence in mismanaging the COVID pandemic, by Brexit design, or both.

Whether the edifice comes crashing down, or we experience a slow but inexorable decline, we have to build a better political system, based on merit and competence, that is representative and accountable, able to tackle the challenges that will face the next generations.

It starts by rejecting the status quo and privilege and rallying for change.

Boris Johnson accused of lying to the public over #Brexit deal after Northe… https://t.co/TcUbfRSttm via @YouTube

Not every media organisation can bear criticism, even self-criticism, but others require it to keep going. END_OF_DOCUMENT_TOKEN_TO_BE_REPLACED

Foucault once suggested that Clausewitz’s famous observation, “war is not merely a political act but a real political instrument” carried out by other means, be reversed, with politics made an extension of war. END_OF_DOCUMENT_TOKEN_TO_BE_REPLACED

Brexit will turn three on the last day of January, over six years since the 2016 referendum kickstarted Britain’s race to the bottom. END_OF_DOCUMENT_TOKEN_TO_BE_REPLACED