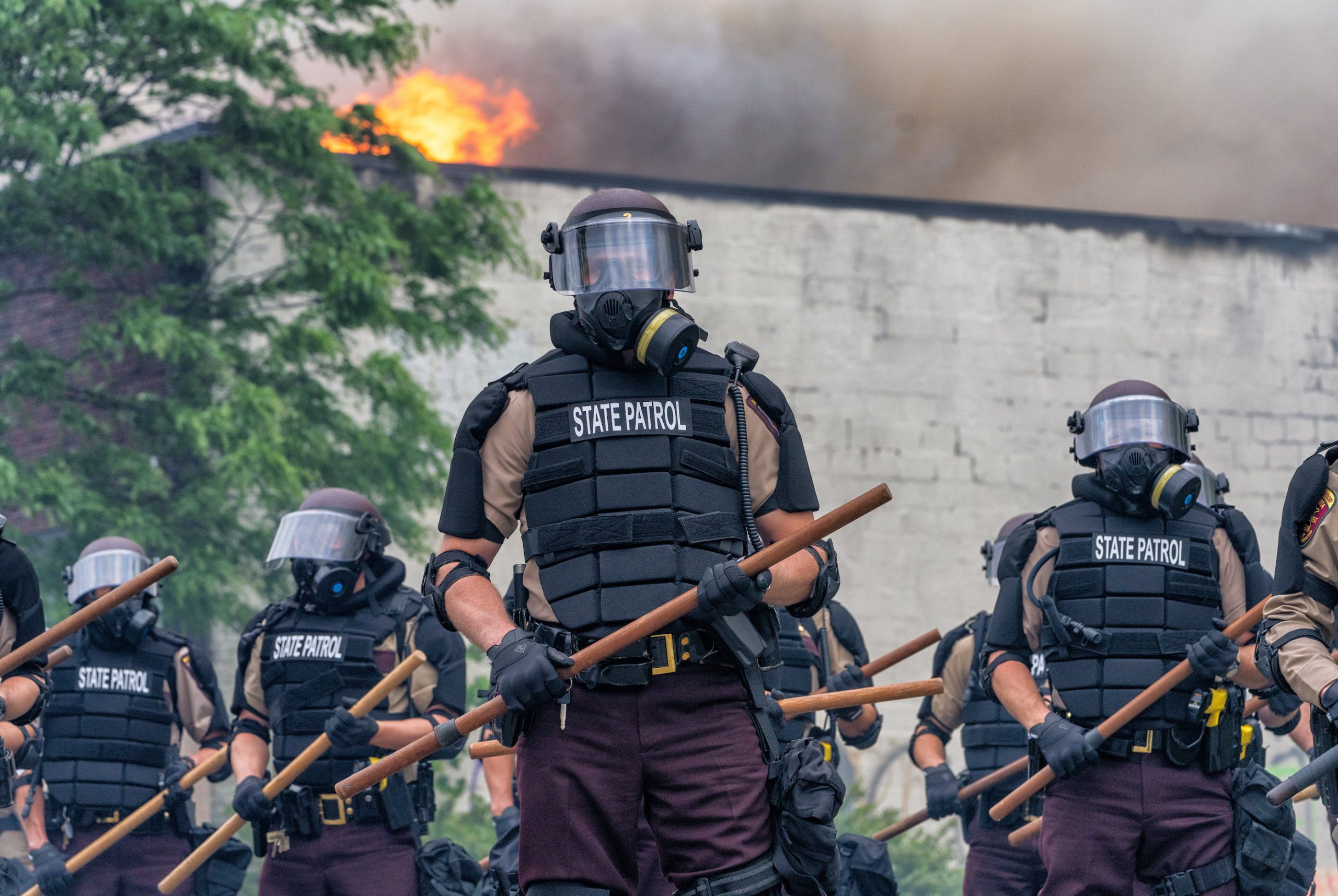 The Battleground’s first foray into “sonic publishing”,  America on Fire thrusts you into the New York City protests that followed the murder of George Floyd by Minneapolis police officers.

Al Zlogar did a great job of capturing the historical moment. Raz Mesinai‘s expert production eliminates the muddiness that typically undermines field recordings of this type.

If you had been there – or at any of the other protests, first in the United States and then throughout Europe – this is probably how you would remember the experience: crowds chanting favourite slogans like “No justice. No peace” and “Fuck the police!”; powerful speeches; and moments when the haphazard rumble of the marchers suddenly built to a moving, rhythmic crescendo.

As millions of participants can attest, these protests were an unforgettable demonstration of passion and purpose, overwhelmingly non-violent. Unfortunately, a majority of the people who were not there have a different impression of them.

During the height of these protests, beginning at the end of May 2020, commentators were wondering aloud whether we had finally crossed the threshold into a future where a legacy of systemic racism would be seriously confronted. Even by the rich, powerful white people who have a disproportionate influence throughout Western society. Utah Senator and former Republican presidential candidate Mitt Romney joined the demonstrations, for goodness sakes.

As the months since the protests began to thin out amply attest, we still live in a world where every step forward towards racial equality falls on slippery ground. This makes it hard to make meaningful headway. Unless that progress is consolidated by institutions, it doesn’t take much of a push to undo it.

And make no mistake, there were plenty of people pushing. Some did it in the fashion of the postwar establishment, trying to redirect the momentum of the movement towards symbolic gestures that would not lead to meaningful change.

But a surprising number broke with that fundamentally liberal strategy, seeking, instead, to reinforce white supremacy in a more ideologically direct manner.

Donald Trump led the way for this latter contingent. Whatever his personal feelings about race – there is ample evidence that they were deeply contradictory for decades – he clearly saw the protests as his pathway to reelection, much as Richard Nixon had during the 1968 presidential race, at the height of the Vietnam War.

Trump and his supporters, both in politics and the media, focused relentlessly on the property damage that happened on the margins of the main protests. If enough people came to see the small minority of participants who crossed that line as the face of the Black Lives Matter movement, they reasoned, eventually our collective memory of it would be permanently distorted.

With the help of archival footage from previous urban uprisings, such as ones that followed the assassination of Martin Luther King Jr. in 1968 and the Rodney King verdict in 1992, last year’s unprecedented global protests could be recast as both less significant and scarier.

The reactionary impulses that had shaped Nixon’s Southern Strategy and the Clinton-era Democratic Party’s willingness to get tough on crime and reduce welfare rolls could be cultivated once more.

As the 2020 presidential election and its chaotic aftermath made clear, Trump was both wrong and right.

His non-stop race-baiting rhetoric did little to win back the suburbs that had cost the Republican Party dearly in the 2018 midterm election. Yet it reconsolidated his political base as nothing else could have.

It is deeply disturbing to listen to this compilation of field recordings in light of the short video presented at Donald Trump’s second impeachment presented yesterday. Because, despite the extreme political differences between the protestors who stormed the Capitol on 6 January and the ones who marched for George Floyd last summer, the sounds they made were eerily reminiscent of decades of demonstrations for social justice.

At one point, you could even hear a right-wing take on the “No justice, No peace” slogan. While it might be comforting to presume that this similarity was the result of deliberate mockery, the truth is more complicated.

Through a convoluted series of logical twists and turns, many of the Americans who marched on Donald Trump’s behalf – not to mention their equivalent in other Western democracies – actually believe that they represent the rightful heirs of the Civil Rights Movement.

But there are millions more who, while stopping short of outright Antisemitism or racism, are convinced that they must defend the United States against threats like Black Lives Matter and Antifa in the name of civil rights.

Indeed, for every Trump supporter who still regards Martin Luther King Jr. as a communist scourge, you are likely to find three more who truly regard him as a role model in their struggle against the godlessness and racism supposedly perpetrated by the New Left, and today’s ‘Cultural Marxists’.

Warning this is very disturbing and hurtful!#Trump supporters reenact the death of #GeorgeFloyd on Church steps, because The Church unveiled a #BlackLivesMatter banner today. pic.twitter.com/kDf4v7H6Ok

This latter sort will even tell you that King was an Evangelical Republican without a trace of irony, oblivious to the massive shift in party allegiances throughout the South since the 1950s.

While it is understandable that the House impeachment managers’ video made it a point to highlight moments when the 6 January protestors were explicitly denigrating the police protecting the Capitol, the overlap with the sort of protests documented in America on Fire is eerie.

Given the massive amount of energy expended by Trump on turning the movement from May and June into something more extreme and frightening than it actually was, the likelihood that this album could fix the historical record now is slim.

But we still need a way to reinforce the memories of those who were actually there and to counter the deception directed towards those who were not. America on Fire is a necessary corrective.

In an era when deep fakes are becoming feasible and enormously powerful social media corporations can make vast amounts of our shared internet history disappear at will, documenting politics as it happens and then finding a way to distil it into something that can be revisited in a manageable amount of time is critical. Hence, the value of field recordings like these.

America is likely to keep burning in the years ahead. So is Europe. And the entire planet is at risk of an ecological holocaust that will make other crises seem trivial.

Perhaps, though, if we find a way to bear witness, both for ourselves and others, as America on Fire does with aplomb, we will have a chance to find refuge from the heat.

America on Fire is also available as a live visual embed on Black Noise. Photograph courtesy of Tony Webster. Published under a Creative Commons license.

Krzysztof Kieślowski’s 1976 film The Scar, which chronicles the construction and operation of a large chemical factory, breaks many of the rules that had governed narrative cinema since the silent era. END_OF_DOCUMENT_TOKEN_TO_BE_REPLACED

The Russian government is awarding prizes to Macedonian writers. END_OF_DOCUMENT_TOKEN_TO_BE_REPLACED

The 1970s was a decade of broken dreams. The end of the postwar boom brought to a close the era of middle-class liberalism in Europe and North America. END_OF_DOCUMENT_TOKEN_TO_BE_REPLACED