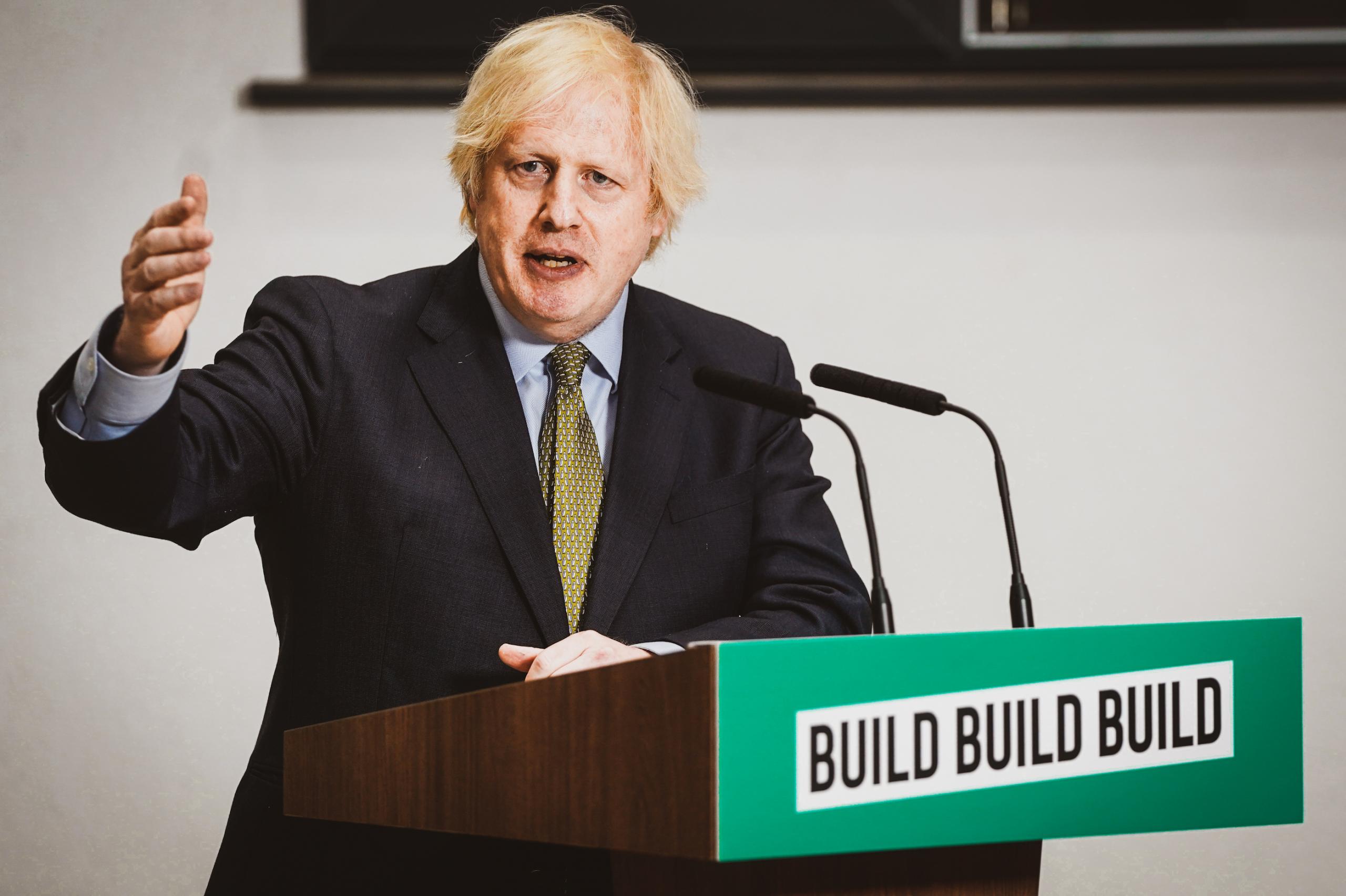 Steel and glass hang over Victorian terraced streets. A grey, dreary morning. The sound of construction work – ubiquitous in recent years – can be heard drifting over the small gardens below.

This is the opening shot of British avant-garde filmmaker John Smith’s Citadel (2020).

Artistic responses to the pandemic have had limited opportunity for public exposure as galleries and museums have spent much of the last twelve months with their doors firmly shut.

Video art has something of an advantage, and Smith has been making the most of his time during lockdown. John Smith’s recent work has rarely strayed from the UK political scene.

Who Are We? (2016) remixed an episode of the BBC’s Question Time political panel show to shine a light on the normalisation of extremism within what is taken to be mainstream political discourse.

Song for Europe (2017) is a humorous take on Anglo-European relations centred around public messaging on Eurotunnel trains.

During the pandemic he has also produced Covid Messages (2020), which uses similar renegade video editing techniques to cast Boris Johnson as magus-in-chief, attempting to control infection rates by the use of magic spells and rituals.

Citadel both continues the themes of his recent work and harkens back to Smith’s celebrated The Girl Chewing Gum (1976), which like this most recent film is almost entirely produced from a single camera shot in the area of the artist’s Dalston home.

Smith’s brilliant device back then was to layer a voice-over seemingly giving directions to people in the street as they go about their business. This had the effect of simultaneously deconstructing the illusionary techniques of mainstream cinema while poking fun at the then-fashion of naturalistic documentary reportage.

In Citadel, the artist provokes a similar act of unmasking or deconstruction, though here it is Prime Minster Boris Johnson whose voice takes centre stage.

For the film’s 16 minute duration, the camera rarely departs from that single window shot looking out towards the City of London. The image of the City – perfectly framed from the vantage of Smith’s home – clearly isn’t a mere background.

Johnson’s speech of 3 February 2020, from which the film’s opening words are lifted, was an attempt to position the UK economically and his government politically, now that Britain had finally entered the Brexit transition period after three and a half years of post-referendum turmoil.

In early February, the warning signs about Coronavirus were already there, as hospitals in northern Italy were beginning to feel the strain.

Nevertheless, ‘BoJo’ was in characteristically bumptious and windy form as he addressed the media gathered in the Old Royal Naval College in Greenwich:

… when barriers are going up, and when there is a risk that new diseases such as Coronavirus will trigger a panic and a desire for market segregation that go beyond what is medically rational to the point of doing real and unnecessary economic damage, then at that moment humanity needs some government somewhere that is willing at least to make the case powerfully for freedom of exchange, some country ready to take off its Clark Kent spectacles and leap into the phone booth and emerge with its cloak flowing as the supercharged champion, of the right of the populations of the earth to buy and sell freely among each other.

That the image on screen makes these words appear to emanate not from the traditional locus of power in Westminster, but the financial district, is evidently not a coincidence.

On 3 March, Johnson again played down the threat of the virus, telling the gathered media at Number 10 that people should go about their business as usual, and that he had spent some of the day visiting Covid-19 patients in hospital, where he “shook hands with everyone”.

As we know, within a few short weeks Johnson would be in a London Intensive Care Unit and Britain would be locked down.

Smith deftly chops up Boris’s speech into a staccato of one-word injunctions as the shot towards the City reacts by jump-cutting sharply to different times of day.

With his voice yoked to the flickering image of Norman Foster’s “Gherkin”, the Shard of Glass, and the Leadenhall building – all beautifully illuminated in a range of lighting conditions courtesy of the British weather – Johnson turns into a parody of the city trader calling out repeatedly “buy”, “sell”, “sell”, “buy”.

After his announcement on 12 March that “many more families are going to lose loved ones before their time”, the City falls eerily silent.

Close listeners will notice the shift in soundscape; construction noise ceasing, replaced by birdsong, punctuated by the occasional ambulance siren. During the film’s mid-section the camera pivots slightly away from the City, towards some of Smith’s neighbours, who, lit up in their kitchens and living rooms take on the role of silent, unknowing extras in the drama Smith is composing.

'I wanted the City to appear visually dramatic but cold and alienating. This faceless mass – I wanted to contrast against the intimacy of people living their lives beneath this looming mirage.'

There’s a curious serenity or detachment as his neighbours go about their business wordlessly below his window; preparing food, exercising or cleaning, playing with the cat. But alongside this feeling is also a degree of tension or anxiety. Just as the pandemic looms large over their lives, so too does the long shadow of those towers consecrated to financial power two miles down the road.

In a move both dramatic and humorous Smith animates Johnson’s voice into an audio spectrum that appears in the lights emanating from one side of a huge office block, like a giant Buck Rogers era robot mouth.

“The time has come…” he intones, addressing himself to those in construction and manufacturing, “work from home if you can, but you should go to work if you can’t work from home”.

The neighbours are not impressed, as a cacophony of distress signals tapped out in Morse code on their light switches breaks the evening’s peace.

As in many of Smith’s films, there’s a playfulness and absurdity in all this, but also a continued reflection on the power of language and the human voice. Johnson’s Etonian drawl literally takes over a whole side of a skyscraper, intoning out like a gargantuan public address system.

The premier’s voice is meant to reassure – if not the population then at least the markets – but the result is distress. Covid messages are mixed messages. His overblown rhetoric is in stark contrast to the silent quotidian life-world of Smiths neighbours.

One definition of a citadel is a fortress or command post. That the City of London is cast in the role of citadel in Smith’s film should be taken as what it appears to be, a critique of the pandemic response, which has too often privileged the economy over people’s safety. During both the Spring and Winter waves of infection, the UK had the world’s worst Covid-19 mortality rate.

As much as highlighting the dominance of economic thought in the pandemic response, Citadel similarly focuses attention on the sidelining of Parliament during the same period, as governments around the world have sought to manage the crisis through emergency powers and ministerial decree.

One interpretation of the silent anxiety and ultimate distress of Smith’s neighbours could be that despite all the failures of the central government during the crisis, opposition, or even concerted criticism has been severely lacking.

Instead, that vacuum has been filled by anti-vaxxers and conspiracy theorists. In the terrible drama of 2020, the citizen – that word so indelibly linked to our shared political heritage – has been reduced to a mute witness, bereft of agency, and the power to influence the course of events.

The film’s final shot is a return to the grey gloomy winter scene with which we began. The City is again partially obscured by fog and the sounds of construction once again drown out any other signs of life.

Despite its brevity and minimal visual materials John Smith has produced a comment on our current predicament which is nothing if not cutting and poignant.

Krzysztof Kieślowski’s 1976 film The Scar, which chronicles the construction and operation of a large chemical factory, breaks many of the rules that had governed narrative cinema since the silent era. END_OF_DOCUMENT_TOKEN_TO_BE_REPLACED

The Russian government is awarding prizes to Macedonian writers. END_OF_DOCUMENT_TOKEN_TO_BE_REPLACED

The 1970s was a decade of broken dreams. The end of the postwar boom brought to a close the era of middle-class liberalism in Europe and North America. END_OF_DOCUMENT_TOKEN_TO_BE_REPLACED