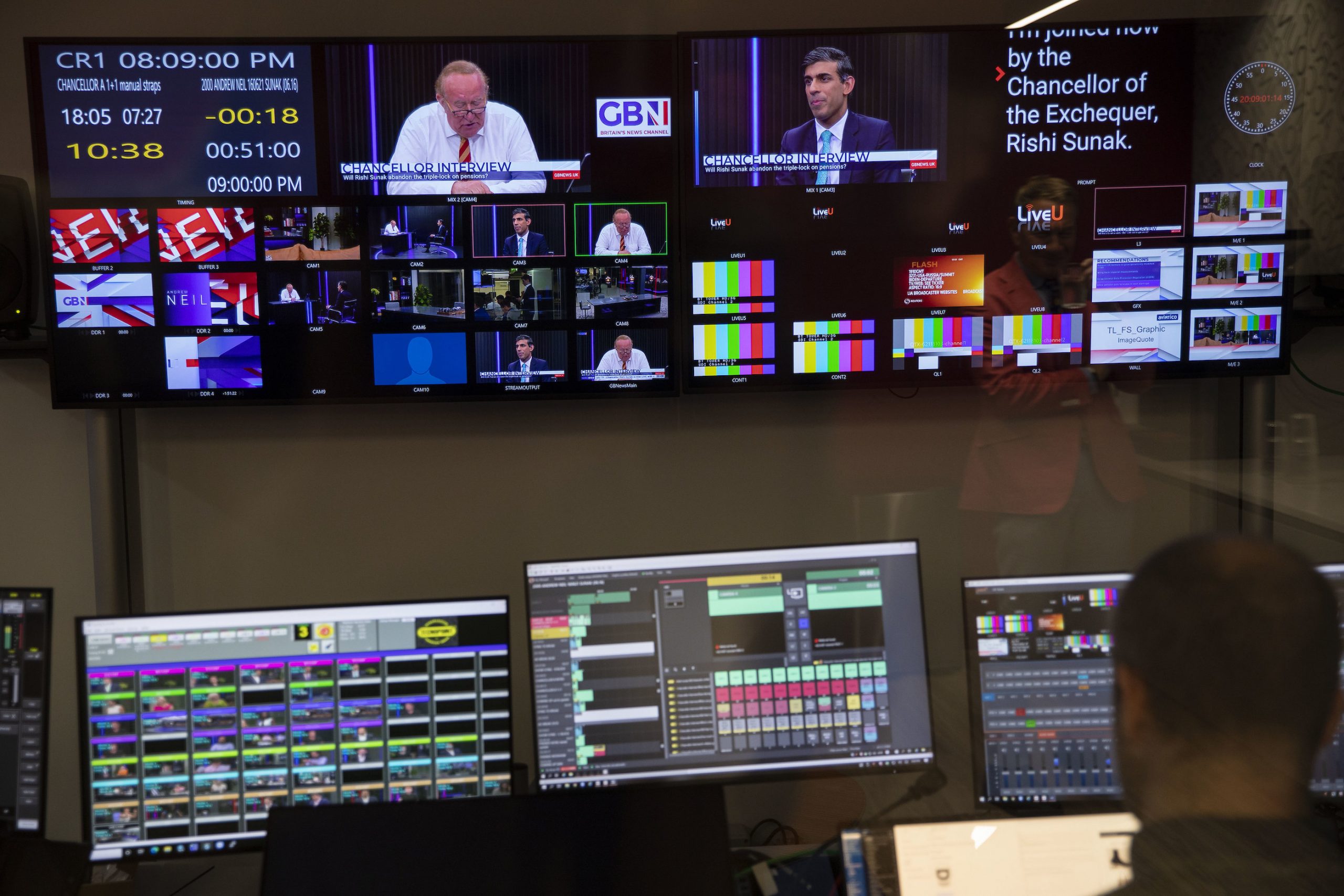 After its first month, GB News has seen its ratings slump despite a promising launch.

A deadly combination of technical glitches and poor quality has held back the operation. The broadcaster will stagger on, but it looks like it will not become a serious threat to the BBC.

Instead, GB News could radicalise a small audience on reactionary ideas.

The BBC might end up appeasing the startup as part of the realm of acceptable debate in this country – just like Daily Mail columnists appearing on BBC Question Time.

Yet the future of the channel is not guaranteed. The low ratings may mean investors will abandon the project sooner or later.

Nevertheless, Team Johnson is doing its best to help out and has granted GB News exclusive access to ministers.

At the same time, Culture Secretary Oliver Dowden has confirmed plans to privatise Channel 4 on the grounds that public service broadcasting is dying and streaming services are the way of the future.

Clearly, the Tory establishment wants to impose greater commercial pressures on Channel 4 to limit its critical coverage of the Johnson government.

This is the same reason why the Tories are threatening to overhaul BBC funding. The right is dedicated to resetting the terms of debate.

What the UK media landscape will look like in future decades is still unclear. One certainty is that the right-wing platforms are getting more vulgar and aggressive on all fronts.

Despite its problems, GB News topped the BBC in its ratings on the first day of its launch.

GB News is a latecomer to this game. If you’re unhappy with the BBC brand of ‘impartiality’, you can switch over to Channel 4 News or Sky News or ITV to get something different.

The difference is Channel 4 offers many left-of-centre viewers a liberal alternative.

Although Channel 4 News has become synonymous with liberal-minded, critical journalism, the British government set up the channel for very different ends. The Thatcher government launched Channel 4 in 1982 to diversify British media.

The Conservatives wanted to create a counterweight to the BBC partly for ideological reasons and partly for strategic reasons. Just like today, the Tory hard-right saw the BBC as a ‘left-wing’ broadcaster because it raised difficult questions from time to time.

The truth is that the BBC has been the agenda-setting news organisation for decades and, as part of this role, thus sets the limits of acceptable debate in the UK.

This is not going to change unless the BBC is changed beyond recognition.

This is why the Tories will go after BBC funding as part of this struggle to remake the media.

It looked like GB News might become a real threat to the BBC. However, it soon became clear this was not because the viewers were enthralled with right-wing talking points. Many viewers felt compelled to troll the fledgeling news channel.

Several viewers called in under such names as ‘Mike Hunt’, ‘Mike Oxlong’ and yes even ‘Hugh Janus’. Apparently, some things are just not resistible. The pranksters have forced GB News to refuse to take surnames from callers.

By contrast, Sky News pulls in 2.5 million to 3 million viewers a day and BBC News can rely on 4 million people to watch it a day.

Once the ratings began to tank, Andrew Neil, the face of GB News, decided to go on ‘holiday’ just two weeks after the launch. Broadcasting from his lovely house in the south of France was a bit tough on Murdoch’s former bulldog.

Arguably, the UK does not need yet another outlet pumping out right-wing talking points.

After all, the British media landscape is already dominated by right-wing newspapers, magazines and websites. But that doesn’t mean it will necessarily die a quick death either.

It’s possible a small right-wing audience will be enough to keep the channel alive. The people behind GB News wanted to inject a hefty dose of right-wing infotainment into the British mainstream media.

You have to feel for their naivety. They really believe the BBC is run by “cultural Marxists” and that must be why they’ve poached so many of their journalists.

War All the Time

The real limits on GB News come from the fact that the UK is very different to the US.

For example, the UK is a far more secular society than the US insofar as most British people are Christians at Christmas and atheists for the rest of the year.

Public opinion has become much more open and progressive on abortion rights and LGBT rights over the last 40 years.

On the other hand, GB News can dig into a well of resentment and fear on issues like immigration, climate change and the COVID-19 pandemic.

But even here there are problems for the right.

For starters, lockdown sceptics are not a cohesive political group. There are New Age types with broadly liberal opinions about politics, and there are right-wing libertarians who think the state wants to harvest their kidneys.

In short, GB News is too ‘coherent’ for conspiracists and too alien to British culture.

This is why the BBC will continue to set the agenda and this wannabe Fox News will just ‘cut through’ to the people who already live in the right-wing echo chamber.

Foucault once suggested that Clausewitz’s famous observation, “war is not merely a political act but a real political instrument” carried out by other means, be reversed, with politics made an extension of war. END_OF_DOCUMENT_TOKEN_TO_BE_REPLACED

Brexit will turn three on the last day of January, over six years since the 2016 referendum kickstarted Britain’s race to the bottom. END_OF_DOCUMENT_TOKEN_TO_BE_REPLACED

Be careful what you wish for. It may be a cliché, but it’s one the Greens are learning all over again. END_OF_DOCUMENT_TOKEN_TO_BE_REPLACED