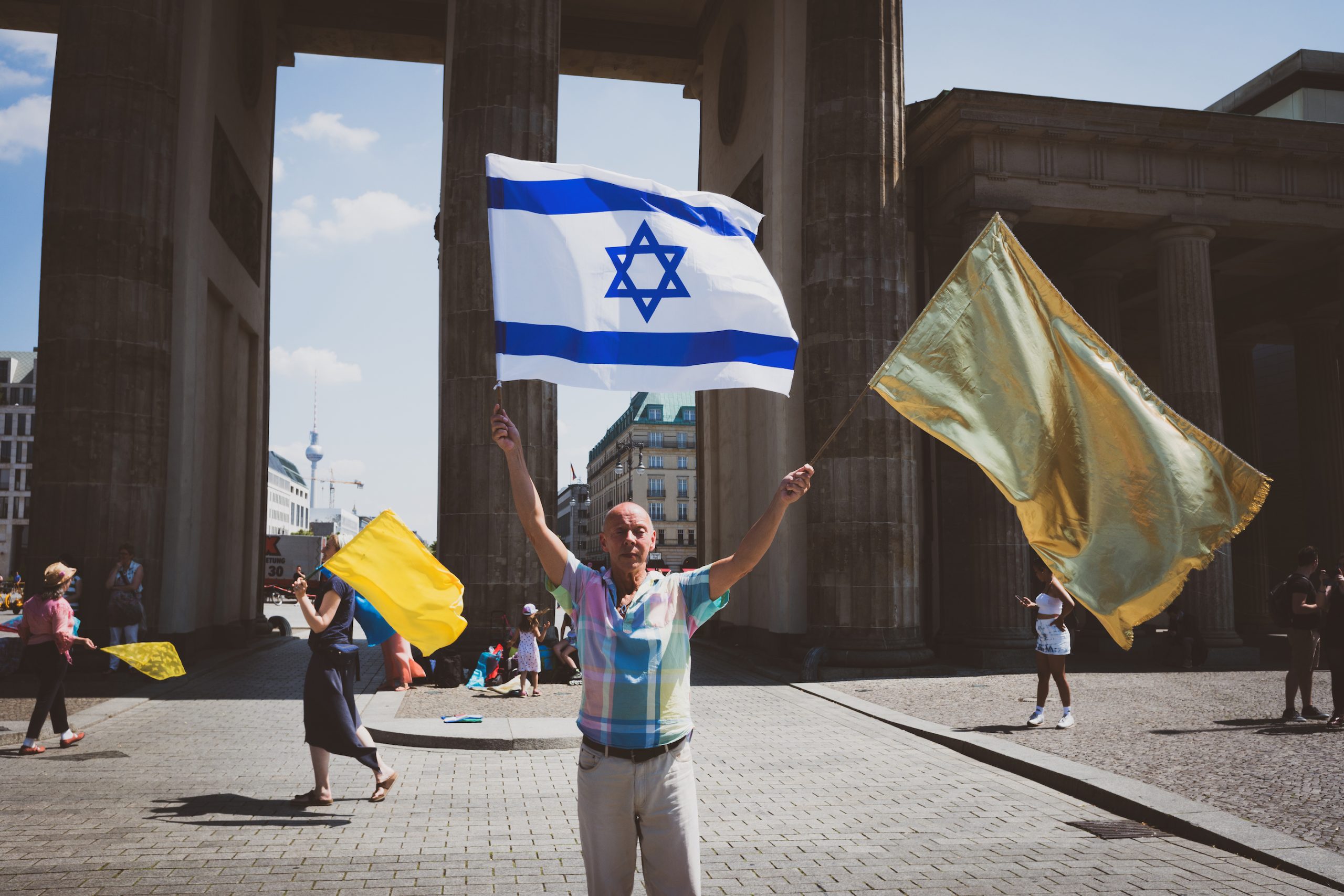 It should be fairly self-evident in principle, in the same way, that fighting any form of racism or group-based discrimination is, though there are obviously different approaches.

But the two natural pillars would be challenging, reporting and prosecuting Antisemitic behaviour on the one hand, and preventing such behaviour through education and training on the other (as well as offering counselling for those affected).

In the case of Antisemitism, however, there is a special factor that comes into play: Israel.

In recent years, the general public has been told by politicians and appointed experts that “Israel-related Antisemitism” (Israelbezogener Antisemitismus) is one of the most virulent forms of Antisemitism and therefore requires particular attention.

The fact that 90% of Antisemitic incidents in Germany are based on far-right racism has so far done little to affect this.

#Germany: Once again, German authorities announced an increase in politically motivated crimes for the year 2020. Most of them perpetrated by the #farright extremist scene. The numbers have been surging for the past 20 years. https://t.co/LyheKNoUyX#antisemitism #extremism https://t.co/2UV2byQBOp

Accordingly, increasing emphasis on fighting Antisemitism has led to an increased emphasis on supporting and defending the Israeli government and its policies towards the Palestinians.

Although this has become commonplace in German culture and politics in general, it is especially evident in the appointment of special commissioners “for Jewish life and the fight against Antisemitism” at the national and state level since 2018.

So far, 14 of 16 federal states have officials in this post, as do other organisations like the Berlin Police, a few local Jewish communities and a number of attorney-generals’ offices.

The holder of this position for the state of Hesse, Uwe Becker, was also deputy mayor of Frankfurt from 2016 to 2021 and has been president of the German-Israeli Society (Deutsch-Israelische Gesellschaft, or DIG) since 2019.

The commissioner for Hamburg, Stefan Hensel, has been chairman of the Hamburg DIG since 2014 and also lived in Israel for several years.

This pro-Israel bias is based on the classification of Israel as a “Jewish state”. If, as Benjamin Netanyahu would like, one treats “Jewish” as the nationality corresponding to Israel in the same way that “German” corresponds to Germany or “French” to France, this makes perfect sense.

However, over 20% of Israeli citizens are of Palestinian, non-Jewish origin (mostly Muslim, with a small Christian minority).

There also happen to be millions of Jews worldwide – more outside than inside Israel – with a plethora of nationalities. Clearly, the idea that Israel is the homeland of all Jews is incorrect.

Not only in practice but also in principle, the idea of a Jewish state can be questionable. No democracy defines itself according to religion or ethnicity. The fact that Iran is officially an “Islamic republic” would surely be taken by most as a reflection of its authoritarian theocratic regime.

This undemocratic understanding of the country was made clear once and for all in 2018 when the Knesset (Israel’s parliament) passed the Nation-State Law, which stipulates that Israel grants the right to self-determination only to Jews.

What this means in practice is open to an extent. The bill enshrines the settlement project in law and relegates Arabic to “special” rather than equal status, both of which reflect this principle.

But the grand wording conveys that this is a definition of national identity, not merely a legal issue. It tells Palestinian citizens of Israel that Israel is not their state, that they are merely tolerated and have no guarantee of equality.

Why, then, do German officials insist on reinforcing the conceptual connection between Jews and Israel at every opportunity, even as they proclaim that holding Jews responsible for Israel’s crimes is Antisemitic?

This paradox is at the heart of how Germany deals with Antisemitism. One of its symptoms is the alarming behaviour towards Jews – in many cases Israelis – who oppose Israel’s political practices and ideological foundations.

Most recently, the Antisemitism Commissioner for the State of Baden-Württemberg, Michael Blume, had an exchange on Twitter with the group Jüdische Stimme für gerechten Frieden in Nahost (Jewish Voice for a Just Peace in the Middle East, henceforth Jüdische Stimme), the highest-profile Jewish pro-Palestinian group in Germany, with many Israeli members.

Some of the hostility Jüdische Stimme has encountered has been described elsewhere, and this was a fairly harmless incident compared to some others.

Nonetheless, the fact that the person involved is a state official whose task is to deal with hostility towards Jews makes it more significant than a commonplace Twitter spat.

The exchange began with Blume’s complaint, on 27 June, that there had been “deafening silence” in Palestinian and pro-Palestinian circles about the killing of the Palestinian journalist Nizar Banat by the Palestinian Authority’s) security forces.

The Commissioner accused such people of only being interested in the welfare of Palestinians when Israel could be blamed, exhibiting this supposed concern in order to downplay the responsibility of Israel for what goes on in the territory it rules – a tactic familiar from supporters of Israel who cynically chant “Free Gaza from Hamas!” while rejecting condemnation of the occupation.

Presented with the fact that actually, many Palestinian Twitter accounts had been full of precisely such criticisms and that people in Palestine had been demonstrating against the PA for this reason, Blume turned this against the German activist group Palästina Spricht (Palestine Speaks), whom he has repeatedly smeared as Antisemitic, asking where their condemnation was.

It was at this juncture that Jüdische Stimme pointed out that the Palestinian Authority was a collaborator organisation whose existence was a result of the occupation itself, and that criticism of the former should not be used to distract from the latter. In response, Blume claimed that such talk of controlled “puppets” was an example of an Antisemitic conspiracy theory.

After this smear, Blume began a new thread in which he referred to Jüdische Stimme as “a supposedly Jewish account”, urging his followers – in a tone not entirely suited to his office – to “check out these tweets”.

The Commissioner later referred to the group as “presenting itself as Jewish”. In other words, because he could not deal with non-Zionist opinions voiced by Jews, he adopted the tactic of questioning their Jewishness.

Once this insinuation had been refuted, Blume abandoned his strategy and, switching to his official Twitter account (which he uses far less), tweeted that he had been under attack by a “highly controversial group” and referred to the “self-appointed” Jüdische Stimme, suggesting that the group, by referring to itself as a Jewish voice, claims to speak for all Jews.

The final escalation came on 1 July. In Germany, this has been declared a day against anti-Muslim racism in commemoration of Marwa El-Sharbini, an Egyptian woman who had immigrated to Germany and was stabbed to death in Dresden by a neo-Nazi on that date in 2009, after describing in court how he had verbally abused her.

In a twist that highlighted the racism of German authorities, her husband was shot and wounded by police when he intervened to protect her. This makes the incident’s commemoration doubly important, as it reminds us that the threat of Islamophobic discrimination comes both from society at large and law enforcement.

On that occasion, Michael Blume saw fit to Tweet – this time without naming Jüdische Stimme – with explicit reference to the commemorative occasion, that anyone who accused people of Arab or Muslim backgrounds of being puppets or collaborators was “combining Antisemitic and racist conspiracy myths in a dangerous fashion”.

A brief reminder: this was directly after attacking first a Palestinian, then a Jewish organisation. With friends like these, who needs enemies?

While Blume’s behaviour merits outrage, it is typical of the individuals and organisations that focus wholly or partly on fighting Antisemitism in Germany.

For example, Berlin Antisemitism Commissioner Samuel Salzborn has implied that the very use of the word “Palestine” is Antisemitic.

National Antisemitism Czar Felix Klein has attacked Palestine solidarity on many occasions, but is best known for his incitement against postcolonial theorist Achille Mbembe.

The Amadeu Antonio Foundation, named after an Angolan immigrant who was beaten to death by a Nazi mob in the eastern German town of Eberswalde on 24 November 1990, is a major state-supported anti-discrimination organisation.

Antonio’s death has particular historical significance as the first major incident of far-right violence after German reunification. It was also revealing for its lack of police intervention and the mild judicial response to the crime.

When Israeli art students at Berlin’s Weissensee Academy of Art started the project School for Unlearning Zionism in October 2020, with a series of events presenting not only non-Zionist perspectives but doing so specifically as people who had grown up under Zionism, media incitement led to the withdrawal of the project’s funding.

The Amadeu Antonio Foundation, which keeps an ongoing chronology of Antisemitic incidents – ranging from violent attacks on Jews and vandalism to Antisemitic jokes at the workplace – had flagged the project. The organisation had claimed that the discussions, workshops and film showings it hosted were “anti-Zionist and Antisemitic”.

In Germany, the two issues are largely treated as synonymous. While the website also has a chronology of anti-refugee incidents, the threshold is far higher than for Antisemitic ones and does not include passing remarks. If the Antonio Amadeu Foundation kept a similar list for every expression of Islamophobia in Germany, they would probably need a whole new website.

A year ago, a group of Israeli artists and scholars living in Berlin started ‘The School for Unlearning Zionism’ to challenge the ideology they grew up on.

Now the program is under attack and being labeled ‘antisemitic’ by the Israeli embassy in Berlin.https://t.co/2xWHXJQAr2

This general phenomenon, exemplified by the many Antisemitism commissioners, is not only a problem for Palestinians and Jews. Rather, it is indicative of the flaws in the official German approach to ethnic discrimination.

In Germany, Antisemitism is considered a unique phenomenon separate from other forms of racism, such as anti-Muslim, anti-Roma and anti-Black discrimination, which are widespread problems, both institutionally and in everyday life.

It would be understandable if non-Jewish minorities resented the disproportionate representation of anti-Antisemitism. Any efforts that encourage such resentment or competition are harmful.

After nationwide pro-Palestinian protests in May, in response to the Skeikh Jarrah crisis and Israel-Hamas war, opportunistic politicians from the ruling CDU and SPD parties called for tougher immigration laws that would facilitate the deportation of asylum seekers and citizenship applicants found guilty of Antisemitic acts – including ones that are not legally actionable.

In calling for such changes, centrist politicians were riding a wave of smears against immigrants and migrant-background Germans, whom they collectively accused of “imported Antisemitism” after a small number of Antisemitic incidents at the pro-Palestinian demonstrations.

Considering the limited scope of post-war de-Nazification, which targeted some significant perpetrators but did not erase Antisemitic attitudes in white German society, do such people really think that Antisemitism needs to be imported?

Sadly, this attitude is also found on the political left, where some of the same people who say “Refugees Welcome” refer to the suggestion that Palestinian refugees be granted their recognised right to return to their homeland as promoting the “destruction of Israel”.

A first step to improve German anti-discrimination policy would be to educate the Antisemitism czars not only about the diversity of Jewish opinion on Zionism but also about the commonalities between different forms of ethnic and religious discrimination.

A second step would be to abolish the office altogether and replace it with a single position to address every form of racism in Germany, not just Antisemitism. This would be a formidable task, to be sure, and would leave less time for Tweets attacking Palestinian and Jewish groups.

Brexit will turn three on the last day of January, over six years since the 2016 referendum kickstarted Britain’s race to the bottom. END_OF_DOCUMENT_TOKEN_TO_BE_REPLACED

Be careful what you wish for. It may be a cliché, but it’s one the Greens are learning all over again. END_OF_DOCUMENT_TOKEN_TO_BE_REPLACED

Before his arrest, Andrew Tate was just another influencer with bad politics. END_OF_DOCUMENT_TOKEN_TO_BE_REPLACED