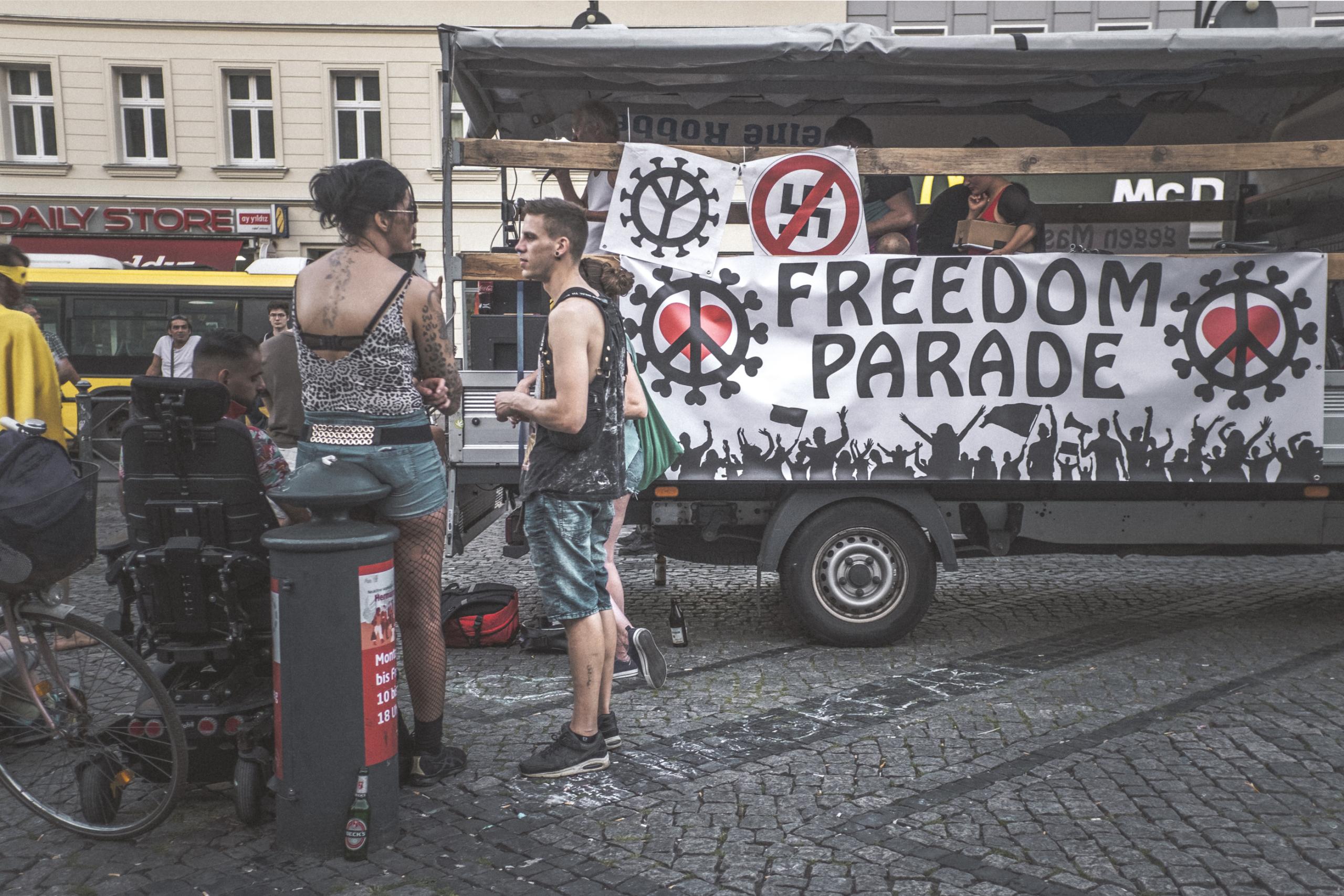 Despite there being little epidemiological data yet on the sinister-sounding Omicron strain, governments have been doubling down on their Covid passport plans, restricting international travel, reintroducing lockdowns of various kinds, and, in the case of European Commission President Ursula von der Leyen, urging mandatory vaccination across the bloc.

A common touchstone amongst those opposed to pandemic restrictions, especially where a conspiratorial element is involved, has been the use of China and China’s Social Credit System (SoCS) as a kind of shorthand for encroaching technocratic tyranny.

One doesn’t have to dig through the archives of far-right, conspiracy addled American websites like Infowars or Breitbart to find commentaries on and analyses of China’s rapid advance into the digital world and the use it has been making of its cutting-edge technologies.

A long, feverish article in The Atlantic in the Autumn of 2020 speculated that the Chinese Communist Party would soon be able to identify every citizen through facial recognition cameras, immediately linking individuals to their personal data and “their body’s one-of-a-kind protein-construction schema”.

With this technology, including “smart diapers” and “smart sex toys”, so the article claims, Beijing will be able to detect political resistance before it manifests itself.

Tilting less towards x-rated science fiction, writing for Novara Media in March, James Meadway noted the danger of normalising the use of technologies such as contact tracing apps and digital health passes, and how these systems could be integrated with already data-rich industries like insurance and national health systems to assign risk scores which might manage citizens access to a range of locations and services.

The article assumed that China’s social credit system had already reached this point, or was well on the way to doing so. And in October, Forbes lamented that citizens of Western democracies trusted each other so little that they were willing to outsource social cohesion to just such a “Chinese style” coercive system.

In each of these cases, the malevolence of China’s ambition for data-driven governance is seen as a fait accompli. The situation, however, is more complex, and a number of recent well-researched reports have painted a very different picture of the social credit systems operating in China and their tech landscape more generally.

It’s a picture that highlights waning Western (notably the US) influence in the Asia Pacific region and fears over China’s increasing technological and economic competitiveness.

Also apparent is the delicate balance Beijing is attempting as it tries to marry rapid development in digital technologies with the potentially disruptive effects of big data, artificial intelligence and machine learning on its centralised form of government.

The notion of social credit stems from the Deng Xiaoping era during China’s tentative steps towards opening up elements of a market economy in the 1980s and 1990s.

Decades of uneven development and weak legal enforcement have led to widespread corruption, fraud, and environmental and food safety scandals.

This “low trust” environment, coupled with the need to find a mechanism to assess the risk of lending in rural areas where past financial histories were seldom recorded, was the driver for the early iteration of the system, which placed compliance with rules and standards at its core.

This baked-in emphasis on the Rule of Law partially explains the ambiguous nature of concepts such as trust and credit within state policy and Chinese society more generally.

From the outset trustworthiness extended well beyond the bounds of financial or commercial considerations, encompassing a more general comment on the honesty and integrity (诚信 / 守信) of a person or organisation.

Since the turn of the millennium, the SoCS has increasingly been promoted as a vanguard tool of the party state’s soft power aimed at addressing a broad range of socio-political problems.

Its increasing centrality to the Chinese Communist Party’s plans for data-driven and law-based governance was reflected in the first comprehensive policy statement on the future of the system, the Outline of the Social Credit System Construction Plan (2014-2020).

The scope of development was nothing if not ambitious, from enhancing economic competitiveness and reducing risks, to deepening international cooperation and China’s international influence, to promoting a culture of civic ethics and building a stable and harmonious socialist society.

The expiry of the plan at the end of 2020 prompted several China-oriented think tanks and policy institutes to review the current situation on the ground. What they found was in stark contrast to the media scare stories and many of the claims made by Chinese state officials.

In November 2020 a report issued by the US Trivium China policy research group noted that in contrast to Western perception of an invasive, digitally holistic and data-rich system capturing vast swaths of the population, the reality is one of flexibility and fragmentation limited primarily to companies.

The main data source for corporate credit files is aggregated government records related to corporate compliance drawn from dozens of state institutions. The nature and quality of this data are highly variable, depending on the degree of participation of the relevant agency.

These core files are meant to be supplemented with product or service quality data and customer ratings. By 2020, almost every registered corporate entity in China was included in the files as well as many hundreds of thousands of officers and directors of businesses.

A second report produced in March 2021 by Germany’s Mercator Institute for China Studies (MERICS) estimates the proportion of ‘natural persons’ within the records to total just over 10%.

While much of the compliance data is centralised, problems persist over data sharing and quality. The ratings system itself is largely handled by a patchwork of industry sector regulators and regional ratings agencies frequently deploying very different credit evaluation criteria depending on local policy initiatives.

As such, there is no single credit score for a business or person. The same is true for the much-discussed Blacklists and less publicised Red lists; the latter containing entities afforded a range of rewards for their compliance.

The MERICS report estimates that sanctions against individuals amount to less than 0.3% of total citizens annually with the SoCS deterrence effect being achieved by the very public nature of the sanctions and lists.

As it stands, sanctions still rely on human input and investigation with no role yet envisaged for algorithmic or other automated decision making. There is also evidence of considerable variation between regions in the application of sanctions.

A breach of industrial safety regulations that would result in blacklisting in Wuhan might not be in other regions according to their local standards of evaluation. As is the case with the centralised databases, there is also a lack of data sharing and integration at the local level, with the degree of digitisation lagging well behind China’s other tech-driven initiatives.

This situation may well persist by design, as a recent update to the Administrative Penalties Law emphasises that digitally collected evidence on infractions should receive human assessment.

In terms of implementation, there is considerable leeway for regions and pilot cities to augment national regulations according to their own initiative, for example targeting enforcement activities towards environmental protection or finance sectors.

This flexibility has shown benefits during the pandemic as new, centrally-issued biosecurity and epidemic containment regulations have been adapted locally according to the situation on the ground; for example offering incentives to companies that encourage employees to return to their workplaces, or improve hygiene standards.

There are also reports that authorities have used blacklists against individuals for as little as not wearing a mask, whereas in Zhengzhou all hospitals taking in Covid-19 patients were assigned blanket red list status.

There are signs that Beijing recognises the overall lack of a legal structure governing the system, or even a basic definition of credit has been the cause for much ambiguity and unevenness in the SoCS’s development.

The central government’s issuing of a draft for comprehensive Social Credit Law in December 2020 seemed aimed at addressing the increasing opaqueness and complexity of the system and the need for national standards governing its use and the proportionate application of sanctions and rewards.

China has a long history of industrial and food safety incidents linked to a lack of oversight and regulation. While some of them receive attention in Western media – such as contaminated meat exports or the repeated instance of adulteration of food products with Melamine – many of them, however, go unreported outside of the country.

Given the prevalence of fraud and corporate malfeasance in the country, it’s perhaps no surprise that there is strong popular support for the social credit system as a means of increasing compliance with rules, raising standards of trustworthiness, and the quality and reputation of China’s products abroad.

This latter point should be understood as a major imperative for the CCP alongside China’s international investment policy, notably the Belt and Road initiative.

Despite the SoCS’s obvious limitations, hyperbole from senior state officials around the time the construction roadmap was issued in 2014, and the numerous media reports about the scoring and sanctioning of various behaviours have had long term effects on Western opinion.

Though there were early plans to integrate data on parking fines and the length of time people spent playing video games, technical limitations and political undesirability seem to have halted all such initiatives.

Municipal ratings systems for individuals are still voluntary and according to the MERICS report have a take-up in some cities as low as 1.5% of the population.

Additionally, the quantity of data collected on participants within so-called model cities like Rongcheng or Wuhu can amount to only one or two data points per head of population.

If such complications are anything to go by, it’s apparent that the ideological effects of China’s social credit policy have run ahead of its application, in practice.

This article is the first in a two-part series. Photograph courtesy of Joel Schalit. All rights reserved.

Brexit will turn three on the last day of January, over six years since the 2016 referendum kickstarted Britain’s race to the bottom. END_OF_DOCUMENT_TOKEN_TO_BE_REPLACED

Be careful what you wish for. It may be a cliché, but it’s one the Greens are learning all over again. END_OF_DOCUMENT_TOKEN_TO_BE_REPLACED

Before his arrest, Andrew Tate was just another influencer with bad politics. END_OF_DOCUMENT_TOKEN_TO_BE_REPLACED