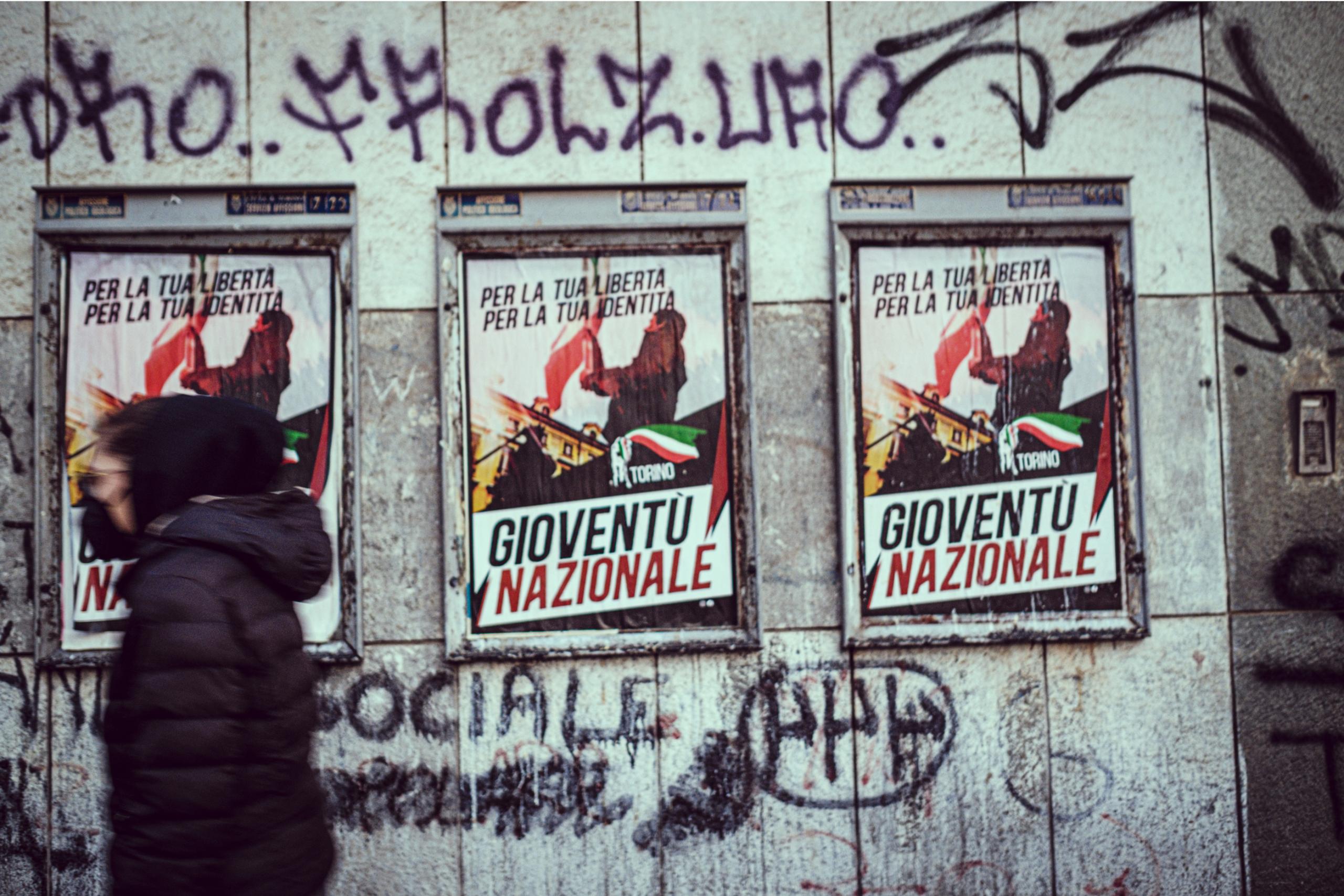 Get them while they're young. FdI advert, Torino.

Sporting the headline “For Your Freedom, For Your Identity”, the Gioventu Nazionale (National Youth) advert, plastered four times across the high school wall, assumed a captive audience.

Little did the advertisers know that the Torino school’s students do not fit the demographic the far-right billboard is aimed at.

At the end of each school day, everything from Arabic to Tamazight and Urdu can be overheard being spoken by the departing students.

The ethnic European target market for the advert exists. Just not in economically mixed parts of the city like Torino’s migrant heavy Nizza-Millefonti neighbourhood.

An advert for the youth auxiliary of Italy’s second-best polling party, the neo-fascist Fratelli d’Italia (FdI), the seeming obtuseness of its placement was not without precedent.

During the 2021 municipal elections, two massive billboards for the party, featuring the visage of its Aryan-looking leader, Georgia Meloni, were erected in the area.

But, as with everything local, they often overlooked hijab-clad women pushing strollers and Black pedestrians. If you witnessed it, the contrast was always worth a chuckle.

An Israeli migrant, who spent part of his childhood in Italy, I’m especially attuned to such discrepancies. Living in Neukölln, a heavily Muslim neighbourhood in Berlin, has only sharpened my antennae.

What amuses me most about these advertisements is not just their fantasy audience, but, to cite the first word of their sponsor’s name, “Fratelli” (Brothers), the idea of kinship they promote.

Good feelings are the last thing such parties traffic in, particularly when it comes to immigrants and minorities. The faux-socialist solidarity vibe is in fact code for its opposite — division and hate.

Just not amongst whites, and otherwise “indigenous” Europeans, whatever that might be. The FdI is ‘united’ by the freedom and identity of nationalist politics.

The Gioventu Nazionale ad campaign is particularly amusing in light of the growing ideological conflicts between Europe’s far-right parties, such as in France and Italy, where far and centre-right overlap.

Sometimes the distinction is intentionally obfuscatory. Centrist parties with extremist leanings often soften their edges to broaden their appeal. Far-right parties do more of the same.

The intention, in both cases, is to find ways to quietly move the mainstream rightwards, by normalising taboo and underground political trends.

A good example is the rise to prominence of France’s controversial Génération identitaire. Its influence is profound and appears throughout the greater European right.

From the Christchurch terrorist Brenton Tarrant, who murdered 51 Muslims in a New Zealand mosque in 2019, to Italy’s Fratelli d’Italia, the pervasiveness of its ideas is discernible.

The lines “For Your Freedom” and “For Your Identity” in the Gioventu Nazionale advert are a dead giveaway. Central to Identitarianism is the belief that people and the nation mirror each other.

While it’s not wrong to say that we’re a reflection of our environments, it’s also dangerous to reduce a person’s identity to where they’re from, as though they’re incomplete without it.

But it’s an easy way of promoting fear of outsiders, of drawing lines between us and them. That’s the point. The problem is the crudeness of the thinking and its low opinion of human intelligence.

When we reduce the state to an abstraction like this, it’s impossible to recognise people who don’t match it. Despite, that is, the fact it’s almost impossible to make any sense out of it.

According to this logic, countries are only defined by the past and their founders. That’s the problem, especially given that those who believe such things often live in fear of foreigners.

Thus, where we live, and the rules governing our lives, tend to be arbitrary. They’re not a reflection of laws or institutions but anxiety. That’s how nationalism works and why it’s so terrifying.

This is why it doesn’t matter that FdI campaigners placed the Gioventu Nazionale adverts on the wall of a school with a large minority student body.

The point in doing so was to say that their identities don’t matter, that there’s a very real wall between them and Italians. The point is to make the kids feel subordinate and like outsiders.

This juxtaposition is as misleading as it is threatening. Despite the Génération identitaire influence, Italian rightists are hardly united. Not just ideologically, but politically.

As this article was being written, Italy’s centre-right political bloc, featuring Fratelli d’Italia, Lega Salvini, and Forza Italia, looked like it was about to break up.

Though long in the works, the reelection of centre-left leaning president Sergio Mattarella, with the support of two out of the three parties — the Lega and Forza Italia – deeply upset the FdI.

The ideological purists of the group, Fratelli d’Italia was already set apart from its allies, having chosen to not take part in the Mario Draghi-led emergency government.

Dissenting over how to handle the COVID-19 crisis, particularly the necessity of vaccinations and the Green Pass, Fratelli d’Italia had struck an especially contemporary political figure.

The party’s positive poll ratings, placing second only to the centre-left Partito Democratico, had proven it right. Siding with the COVID deniers had helped the FdI update their right-wing agenda.

Indeed, though the Lega Salvini had also done so, the gesture and the support it had shown Italy’s anti-vaxxers appeared contradictory and insincere, whereas Fratelli d’Italia did not.

In doing so, the neo-fascist party had fulfilled what an increasing number of pundits have argued is a different kind of populism, that had found a new core concern other than immigration.

What’s so significant about these analyses are how they distinguish between the Coronavirus and migration crises, as though they’re separate events, about public health and racism.

The fact that they’re intimately intertwined is what makes them naturally compatible concerns, particularly in the fascist imaginary.

Immigrants, like the Jews were once regarded before them, have always been viewed as a virus being used to pollute the body politic.

It’s an analogy that’s been used before to explain the nationalism that informs anti-vaxxer ideology. But it’s always limited by ignorance of the Antisemitism antecedent.

This is where the aforementioned Génération identitaire influence comes to bear again. Being infected is no different from being replaced.

Especially if you blame the state for using migrants as a cheaper source of labour than indigenous Europeans.

None of this, of course, is reflected in the nationalist posters lining the wall of the Torino high school. But it doesn’t have to.

The nationalism the posters express is entirely complementary of this worldview. What we have to watch for is how it will get reformulated by anti-vaxxers to say something truly new.

That’s why the new post-migrant politics of the far-right is by no means post-migrant. It’s just another return to the same xenophobic politics fascism has always trafficked in.

Hence, the importance of paying attention to political propaganda like the Gioventu Nazionale posters, and what they signify in context.

Foucault once suggested that Clausewitz’s famous observation, “war is not merely a political act but a real political instrument” carried out by other means, be reversed, with politics made an extension of war. END_OF_DOCUMENT_TOKEN_TO_BE_REPLACED

Brexit will turn three on the last day of January, over six years since the 2016 referendum kickstarted Britain’s race to the bottom. END_OF_DOCUMENT_TOKEN_TO_BE_REPLACED

Be careful what you wish for. It may be a cliché, but it’s one the Greens are learning all over again. END_OF_DOCUMENT_TOKEN_TO_BE_REPLACED