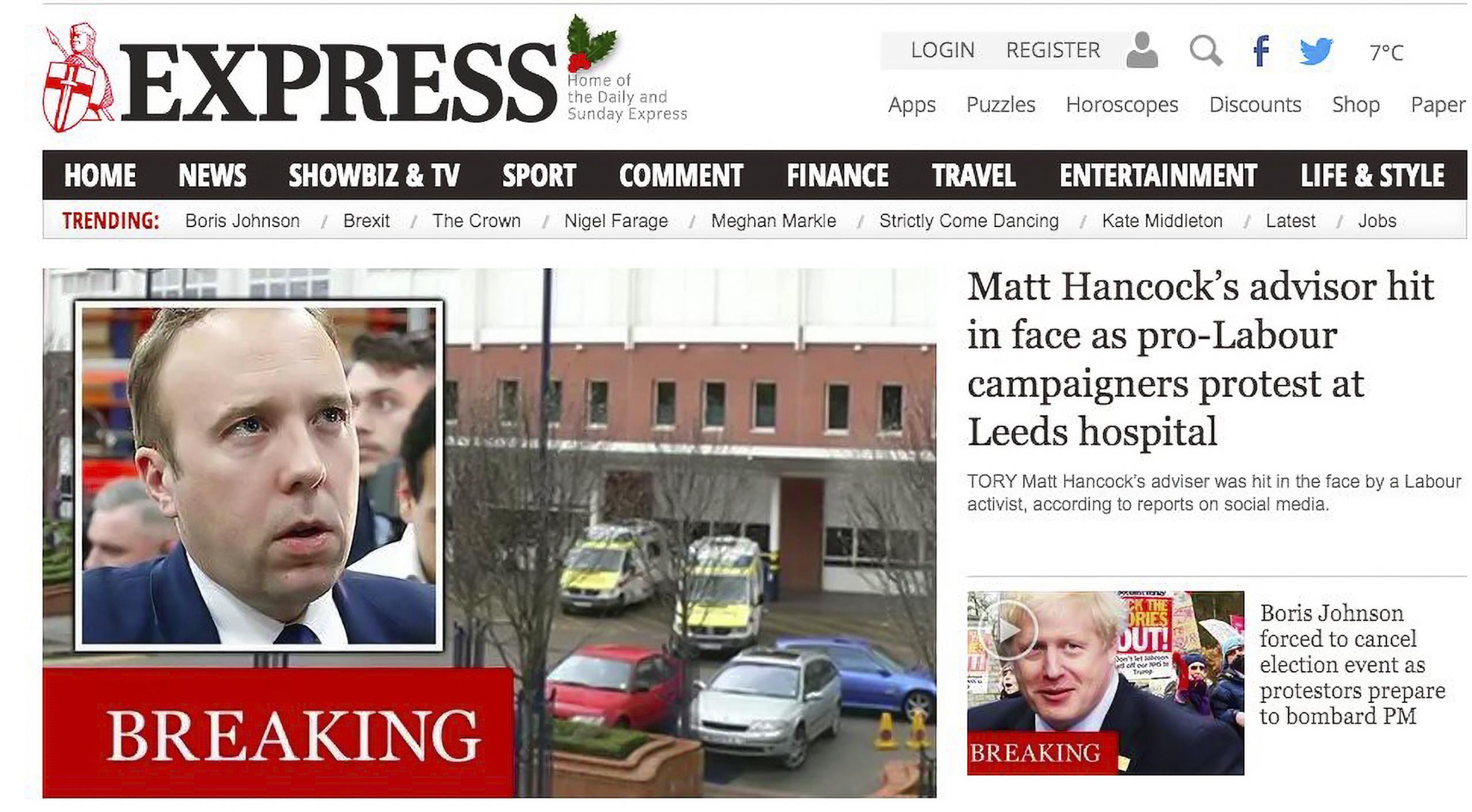 The exterior is a sharp, sleek facade of glass and vitrolite panelling bound together by metal.

Once you’re through the front doors, you realise the building is from a different age.

The interior is full-blown art deco with a gold-plated panel celebrating British society and imperialism.

A large pendant lamp hangs down from the ceiling. A metallic sculpture of a snake welcomes you.

It may be one of the nicest buildings on Fleet Street. The foyer looks like a set for the film adaptation of The Great Gatsby.

It would be easy to be nostalgic about Fleet Street before 24-hour news, but the old days weren’t all great.

The history of British newspapers is defined by provocative content, but one of the most provocative of all is The Daily Express.

Evelyn Waugh nicknamed it The Daily Brute in his novel Scoop for good reason.

Few newspapers have contributed as consistently to the vulgarity of British media as The Daily Express. Even The Sun began life as a centre-left newspaper targeted at the progressive middle class.

The Daily Express has been an aggressive right-wing newspaper for more than a century.

Not only has The Daily Express backed the Conservative Party at almost every general election since 1945, but the only time when it broke with its record was also to support UKIP in 2015.

However, The Daily Express returned to being a part of the Tory media in 2017 when the British right was united against Jeremy Corbyn. The paper continued to support the Tories in 2019.

Now that Brexit is ‘done’, and Corbyn is gone, The Daily Express is free to consider its political allegiances once again.

Under Beaverbrook, The Daily Express became the highest circulation newspaper in the world in the 1930s.

Lord Beaverbrook started out as a Liberal Unionist MP. He helped bring down Prime Minister Asquith before serving as minister of information to Prime Minister David Lloyd George (who gave him his peerage).

His rival Lord Northcliffe, who owned The Daily Mail, was director of propaganda. The two played a key role in promoting Allied disinformation during the First World War.

Much like Winston Churchill, Beaverbrook later crossed the floor of the House of Commons and joined the Conservative Party. He saw himself as an ‘outsider’ despite being extremely well-connected.

Loyalty was a foreign word to Lord Beaverbrook.

Even after he joined the Tories, Beaverbrook used The Daily Express to back candidates against Conservative leader Stanley Baldwin. He saw the newspaper as a major weapon in his war chest.

Naturally, the Canadian publishing magnate was not afraid of the word ‘propaganda’.

He once told a Royal Commission on the media that he used his newspapers “for the purpose of making propaganda”. He had no illusions about the media and journalists.

Lord Beaverbrook later used The Daily Express to campaign on his favoured political causes, in particular a new nationalism based on the British Empire.

He wanted to focus UK trade with the colonies and raise protectionist barriers to the rest of the world.

This fits very well with the paper’s latter-day Euroscepticism. However, there were European political movements that The Daily Express supported.

Much like The Daily Mail, The Daily Express was more than sympathetic to revolutionary conservatism and its close cousin fascism in the inter-war period.

One Daily Express columnist was Henry Williamson, a close friend of Oswald Mosley and an admirer of Adolf Hitler. He continued to sympathise with Nazi Germany long after the war.

As a Mail war correspondent based in Abyssinia, Evelyn Waugh was a supporter of Benito Mussolini and saw Italy’s 1935 invasion as a necessity to “tame” the country.

He was also very enamoured with Spanish dictator Francisco Franco.

The Daily Express infamously ran the headline ‘THERE WILL BE NO WAR THIS YEAR’ in 1939. The newspaper was cheering on Prime Minister Chamberlain and his ‘appeasement’ strategy.

Once Britain was at war with Germany, The Daily Express fell in line with its ‘patriotic duties’ just as The Daily Mail did. The newspapers cheered for the spitfires. Meanwhile, Henry Williamson was detained under Defence Regulation 18B.

Of course, fascism was a lot more fashionable in elite circles during the 1930s than we like to think.

Winston Churchill wrote a flattering profile of Hitler in his book Great Contemporaries. He also praised Mussolini on several occasions in the House of Commons.

The British media was no different. Even John Reith of the BBC was a fan of Mussolini. The Daily Express was not out of step with the rest of the British establishment when it came to fascism.

The flirtations with fascism did not cost the paper. The newspaper was extremely successful throughout the 1930s and 40s. The Beaverbrook era was the golden age for The Daily Express.

The newspaper has never regained the glorious heights of those decades.

After Lord Beaverbrook’s death in 1964, The Daily Express entered a period of long decline and it fell into the hands of faceless corporations.

By this point, The Daily Mirror had overtaken The Daily Express as the most influential newspaper in Britain. And the stage was set for Rupert Murdoch to fill the space for dynamic right-wing journalism.

The Meaning of Dirty Des

During its long period of decline, The Daily Express was bought and sold many times but it was eventually snapped up by Richard Desmond in 2000.

Desmond had made his fortune in adult magazines, but he had bigger game in mind with The Daily Express.

Although Richard Desmond prefers not to be called a ‘pornographer’ because the word pornography implies illegality, his publishing house Northern & Shell specialised in adult material to be stocked on the gentlemen’s shelf in shops across the land.

So when he bought The Daily Express, Desmond was nicknamed ‘Dirty Des’ by Private Eye. The deal was controversial among the paper’s conservative writers and Peter Hitchens jumped ship to The Mail on Sunday.

During the reign of Dirty Des, The Daily Express continued as a tabloid running on salacious gossip and picking up the stories that even The Daily Mail wouldn’t touch. The combination was still right-wing populism, but it had its eccentricities.

For example, The Daily Express became notorious for peddling conspiracy theories about the death of Princess Diana.

This is partly what set it apart from other right-wing publications, especially The Telegraph which always saw itself as ‘a serious newspaper’.

The Daily Express did everything the others did, but with more gusto. If you wanted to read right-wing tirades against multiculturalism, benefits culture and asylum seekers, The Daily Express could provide.

And, of course, The Daily Express played a key role in popularising Eurosceptic talking points.

The newspaper became increasingly close to the UK Independence Party over time, and eventually became the only mainstream newspaper to back the party.

This was a defining moment for the paper and the country. The newspaper helped turn up the heat on David Cameron and forced him to hold a referendum on Brexit.

The rest is history.

After decades of Conservative support, The Daily Express switched from Tory to UKIP in 2011 after backing David Cameron in one election. The newspaper backed the fringe right-wing party in the 2015 general election.

Plenty of right-wing British journalists have fraternised with Nigel Farage. However, 2015 was the height of UKIP’s fortunes. The party’s vote share peaked at 12.6% with 3.8 million people casting a vote for UKIP.

Nevertheless, The Daily Express called on its readers to vote Tory again in 2019.

The fact that the same company behind the paper owned The Mirror, the only pro-Labour newspaper in the UK, did not matter.

This is because The Daily Express has cultivated a specific readership with its style of journalism. No doubt Reach bought the paper because it has been so effective and continues to make money. Profit comes before politics.

Unfortunately, The Daily Express will continue to shape public opinion.

Even those who regard the newspaper as a reactionary rag have to engage with its talking points.

Until it ceases to fulfil that niche,  it’s impossible to imagine UK news without The Daily Express.

Not every media organisation can bear criticism, even self-criticism, but others require it to keep going. END_OF_DOCUMENT_TOKEN_TO_BE_REPLACED

Foucault once suggested that Clausewitz’s famous observation, “war is not merely a political act but a real political instrument” carried out by other means, be reversed, with politics made an extension of war. END_OF_DOCUMENT_TOKEN_TO_BE_REPLACED

Brexit will turn three on the last day of January, over six years since the 2016 referendum kickstarted Britain’s race to the bottom. END_OF_DOCUMENT_TOKEN_TO_BE_REPLACED