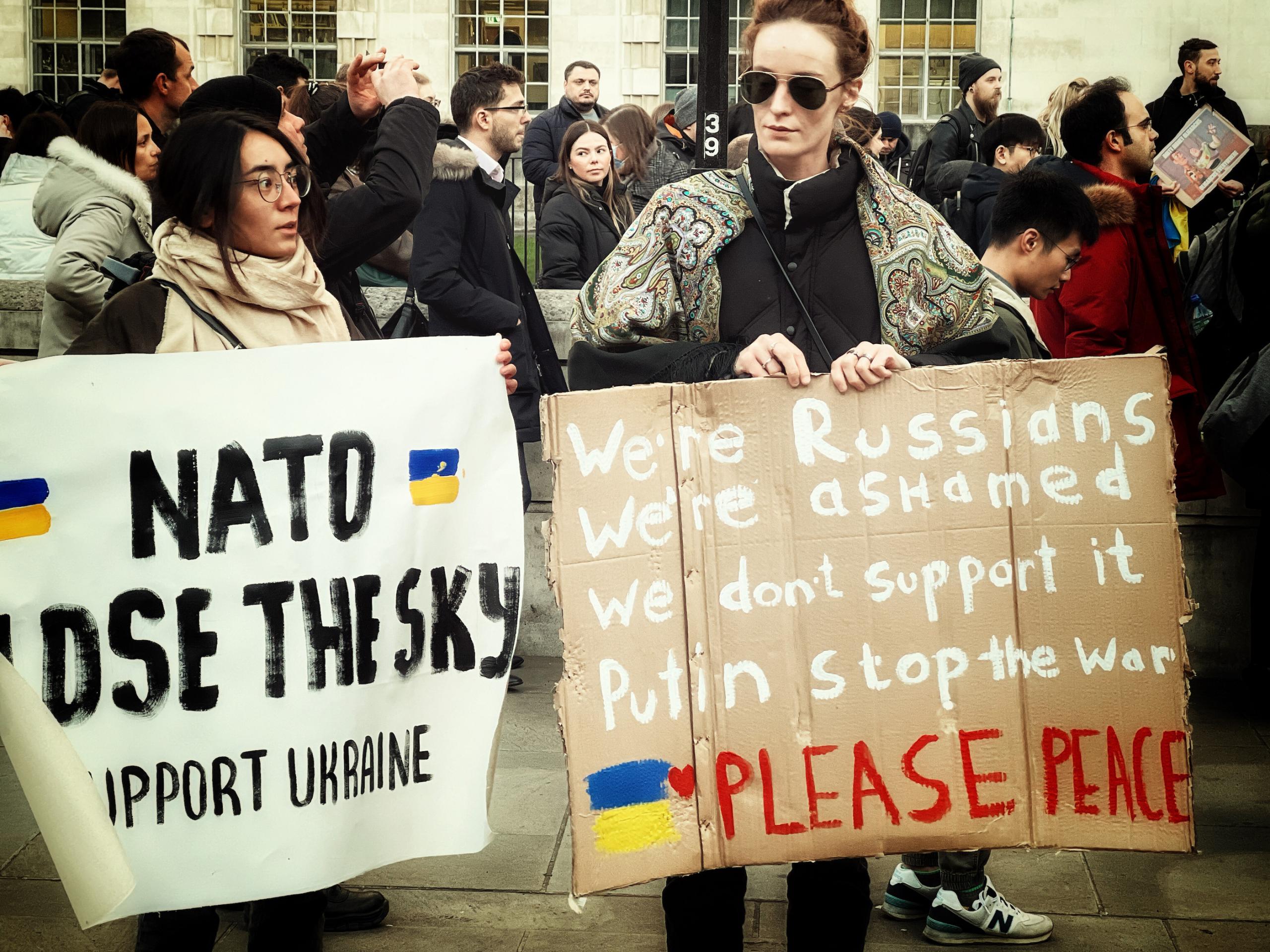 A fine line of cops channelled the protesters and civilians making their way up the road.

This was day three of the war.

It seemed like the Russian army would take Kyiv any minute. But Ukrainian troops were putting up a serious fight, with the support of arms arriving from the West.

The dominant feeling was one of defiance and rage. I could hear Ukrainians shouting “Slava Ukraini! Heroim Slava!”

The Ukrainian organisers wanted to pressure the British government to “take action”.

I soon encountered leafleteers from groups such as the Alliance for Workers’ Liberty (AWL) and Anticapitalist Resistance.

The AWL had planned a Ukraine solitary demo outside the Russian embassy, but decided to merge its protest with the demonstration in Whitehall.

The left always has a presence at these demos, but the usual suspects were absent. No Socialist Workers Party placards were being distributed.

Of course, the demo was a mixture of different politics.

There were more calls for ‘tougher sanctions’, demanding Russian assets be seized and for Russia to be kicked out of SWIFT.

There were calls for NATO to take military action. Some specified a no-fly zone, while others were less precise.

Many Ukrainians were present, but there were Georgians, Kazakhs, Lithuanians, Poles and Romanians flying their flags in support.

I even spotted some Welsh nationalists flying the Welsh flag along with the Ukrainian flag.

Appropriately, the demonstration was taking place opposite a war memorial and around statues of British military figures.

The Cenotaph was just down the road. The cabinet war rooms not much further.

Once again, Europe is facing a disastrous war with the potential to engulf the world.

I came along to show solidarity for ordinary Ukrainians. I hoped that this protest would encourage further dissent in Russia itself.

On the other hand, it was a strange demonstration.

The protests were supporting UK policy and demanding the government go further. It’s not the routine demo organised in Westminster.

Over time, the UK government changed its attitude towards Vladimir Putin. He was once favoured as a reformer and a necessary ally against global terrorism.

As the Russian government turned on many of the ex-pat London oligarchs associated with the Yeltsin era, the government began to worry that Putin was no reformer after all.

The potential for this war to spiral into an international bloodbath should not be underestimated.

Now on day five of the conflict, the world may be about to face its closest call with nuclear war since the Able Archer exercise in 1983 and the Yom Kippur War a decade prior.

Claiming he was responding to aggressive statements from NATO member states, Putin was hoping to discourage them from continuing to resupply Ukraine with weapons.

Though making frightful headlines, the EU responded with an announcement that for the first time in its history, it would purchase weapons for another country.

That country being Ukraine, of course, having already had major success shooting down Russian aircraft, and destroying Russian tanks, using missiles from NATO.

The Meaning of “Taking Action”

The reason why the United States and its allies are being cautious is self-evident. Striking Russian forces would be the quickest way to start a nuclear war.

The Ukraine crisis has predictably reignited old rows on the British left about how to oppose war and what internationalism looks like in practice.

After the Ukraine demo, I attended a virtual anti-war rally held by Code Pink, CND and the Stop the War Coalition.

Former Labour leader Jeremy Corbyn gave a strong speech condemning the Russian invasion and calling for the troops to get out of Ukraine.

Unsurprisingly, the event has been slandered as a gathering for ‘Tankies’ and ‘Fifth Columnists’ who support Putin and prefer to talk about NATO than Russian crimes.

The right, together with sections of the centre-left, have united behind these accusations.

Labour leader Keir Starmer has used the crisis as an opportunity to crackdown on Young Labour and force Labour MPs to distance themselves from Stop the War.

The real agenda here is to bury Corbyn’s legacy.

It’s true that the speakers at this anti-war gathering stressed the failures of Western governments, particularly when it came to NATO expansion.

However, this does not preclude opposing the invasion. But some people don’t want to hear this.

Instead, you can expect to be accused of supporting Putin if you so much as mention NATO.

It’s just like the arguments in the run-up to the Iraq War.

There remains a minority of leftists and rightists who support Putin (in fact, more the latter). These people have no grasp of the facts.

Many of Putin’s Western supporters are gripped by conspiracy theories about ‘globalists’. Their racism is transparent.

So why talk about them? If we permit scapegoating like this, we risk losing sight of the crisis, instead of confronting it.

This is what marches like these are ideally about. Not to argue about who is to blame, but about what the crisis has come to, and what can be done to stop it.

Sadly, even if it had its act together, the left has little to no influence over this today.

It looks like Vladimir Putin may have misread both Ukraine and the Russian people, as he never anticipated this much pushback, both at home and abroad.

However, the war is set to continue until the bitter end unless there is a diplomatic miracle.

The Russian government claims, falsely, that there is a genocide taking place in Eastern Ukraine and that the Ukrainian far-right is behind it.

The invasion is framed as a humanitarian intervention that the Russians call “a special military operation”.

We may scoff at such transparent lies, but the war is still going ahead on these terms. The worst thing is how unpredictable the outcome might be.

I can’t remember a time when political leaders were more impulsive and disconnected from reality than they are now.

That’s what makes me most concerned about Putin and his threats. If only marches and demonstrations like these could instil some sense into him.

Of course, if he won’t pay attention to Russian protests, there’s no way the Russian leader would give a rat’s ass about our own.

I’d hate to think that someone as subject to their whims as Vladimir Putin has the power to start a nuclear war.

We can moan all we want about how the Americans and EU enabled him to do this. But the bottom line is that we’ve come to rely on Putin not to do it.

Brexit will turn three on the last day of January, over six years since the 2016 referendum kickstarted Britain’s race to the bottom. END_OF_DOCUMENT_TOKEN_TO_BE_REPLACED

Be careful what you wish for. It may be a cliché, but it’s one the Greens are learning all over again. END_OF_DOCUMENT_TOKEN_TO_BE_REPLACED

Before his arrest, Andrew Tate was just another influencer with bad politics. END_OF_DOCUMENT_TOKEN_TO_BE_REPLACED