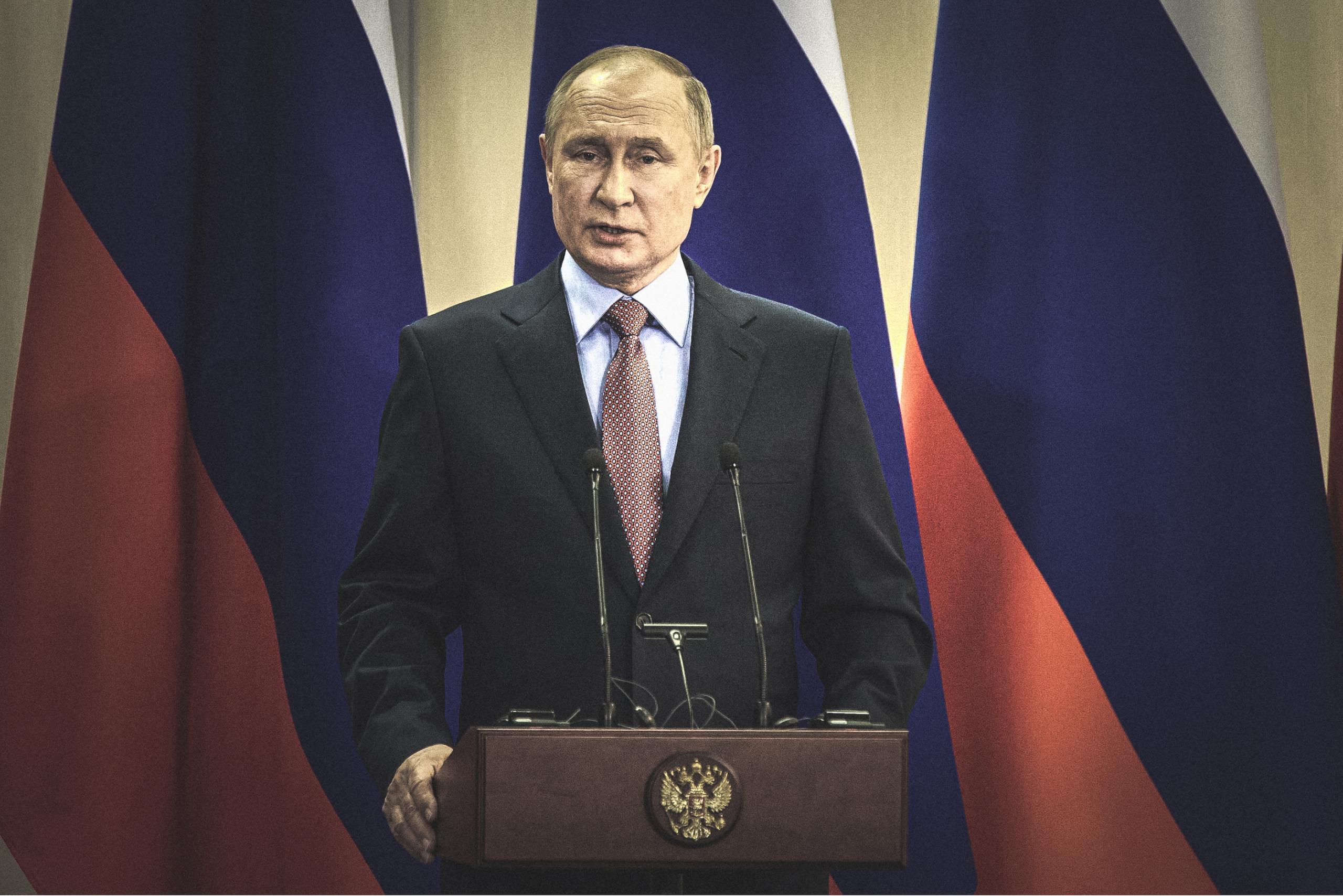 Invasion cannot be hidden. It is an act of sincerity, of authenticity.

This sincerity is one of the most striking things about Vladimir Putin’s invasion of Ukraine. His eve-of-war speech and his public statements since the invasion began offer little doubt over what he intends: Putin seeks an erasure of any kind of Ukrainian entity outside Russian control.

Although lip service is paid to ‘de-Nazification’, Russia’s war aims are incompatible with Ukrainian self-determination and, hence, the stakes are binary; if Russia wins, Ukraine is destroyed.

While there is a theoretical chance that Russia’s leader might accept some kind of face-saving compromise if his army and the state risk total collapse, this would be a defeat in all but name.

Even if armed conflict and Russian involvement in Ukraine has been continuing since 2014, this war is still a shock. The sincerity and commitment of the invasion is an abrupt departure from one of the defining features of Vladimir Putin’s rule: The constant destabilisation of any notion of truth.

While regimes and politicians (in all political systems) lie either occasionally or continuously, there has been something distinctive about the obfuscation that defines Putin’s governance.

As chroniclers such as Peter Pomerantsev have shown, post-1999 Russia became an intentionally baffling fusion of the democratic and the authoritarian. The boundaries were never clear. What and whom was permitted one day would not be allowed the next.

The Kremlin’s foreign policy and military interventions were similarly clouded in a fog of denial. In Syria, Russia purported to be fighting Islamist extremists rather than a broader set of opponents of Assad. The destruction of cities like Aleppo was barely acknowledged.

Through manipulation of information, on social media or through more covert means, Russia managed to further Vladimir Putin’s strategic aims such as Brexit and the election of Donald Trump, as well as ensnaring politicians and other key figures in the West.

One of Putin’s great achievements in this war was to assemble a disparate, global coalition that would either directly support his regime, turn a blind eye to it, or make excuses for the Kremlin’s crimes, or indirectly further its strategic aims.

This sprawling coalition spanned the political spectrum from right to left, although overt support was concentrated at the extremes. According to taste, Russia could be the last bastion of white Christian civilisation or an essential bulwark against western imperialism.

And if your agenda was more venal than ideological, Russia or its proxies offered wide scope for graft, sometimes through servicing the legal or other needs of Vladimir Putin’s oligarchical proxies.

In my book Denial: The Unspeakable Truth, I argued that organised projects of denialism – such as climate change denialism – were giving way to a disorganised, but potentially more potent, era of ‘post-denialism’.

Whereas denialism attempts to contest and overturn an accepted truth, post-denialism destabilises the notion of truth itself.

Just as Trump throws out a continual stream of lies or half-truths that do not cohere into a narrative, so Putin’s Russia destabilised the notion that a state could be narratively parsed.

For those searching for support for their own truths, Russia became just what one wanted to see.

Yet Vladimir Putin always had clear objectives. While, since 2014, post-denialist obfuscation allowed Russia’s proxies to find ways of excusing support for separatism in Eastern Ukraine, the takeover of Crimea and war crimes in Syria, in February 2022, Putin finally jettisoned any kind of deniability.

The invasion of Ukraine was justified by the Russian leader in revanchist nationalist terms. He finally spoke from the heart and committed. Perhaps Putin felt liberated, finally released from tiresome post-denialist ambiguity.

Now, in a breathtakingly short time, Russia has transformed itself internally from an authoritarian state in which a limited amount of civil society was (sometimes) tolerated, into a much more straightforward dictatorship.

Vladimir Putin had offered Russia a country where stability would be maintained, at the expense of freedom only where necessary. Russians could use the Internet and shop at IKEA. Oligarchs could join the globally mobile elite.

Now, the country is retracting into a kind of North Korea, where the medicine of authority is not washed down with a spoonful of western consumerist sugar.

Was this always the plan, the country Putin hoped to build? We cannot know at this point. But it is becoming clearer that the ambiguous balancing act that post-denialist societies require may not be sustainable over the long term.

In the US, for example, claims that the 2020 election was ‘stolen’ are rapidly morphing into outright justifications of fascism. Who, in the end, wants to practice plausible deniability forever? Might it just be a whole lot easier to give up and embrace dictatorship?

Getting off the fence comes with big risks. It is unclear whether revanchist Russian nationalism can garner enough support to compensate for tyranny and isolation. The complex web Russia has woven internationally is rapidly falling apart now that Putin has expressed his desires.

Even though many Trumpist Republicans, and Trump himself, might have admired Putin’s authoritarian ‘anti-wokeness’ (and, in some quarters, were also grateful for his help), that doesn’t mean support for the revival of Russian empire.

While providing services to the Russian elite may have enriched law firms and financial services institutions in London, and helped support Tory politicians, the tacit deal was it all had to happen quietly.

While some on the western anti-imperialist left might have seen Trump as an important counterweight to empire, the invasion of Ukraine is hard to view as anything but a chauvinist act.

In short, Putin’s born-again sincerity is simply too embarrassing to allow his coalition to survive.

On the left, the best Putin can expect is anti-imperialist criticism of NATO alongside criticism of the invasion. Sure, there are western supporters of Russia’s campaign in Ukraine, but neither unreconstructed Tankies nor crankish fascists are enough to be of much assistance.

Vladimir Putin is now alone; years of work, gone in a flash.

The trouble with sincerity is that you leave yourself much more vulnerable. By revealing your hand, you can be opposed for who you actually are and what you actually want.

It’s not that the Russian leader has stopped lying and twisting the truth. His lies are now simply pro forma propaganda, to be expected and easy to unpick.

The fact of chauvinism and invasion cannot be covered up by any number of cries of ‘de-Nazification’. There is nothing to obfuscate anymore.

not sure destroying the Babyn Yar Holocaust memorial – honouring tens of thousands of Jews killed in WW2 – is consistent with the “de-nazification” theme https://t.co/sIVgVprUbC

Putin is now just a tyrant, an ugly human being rather than a mercurial manipulator of the truth.

In my work on denialism, I have suggested that if it were to end, denialism would be replaced with something we are ill-prepared for: Open advocacy for things that had become unspeakable.

I have tried to show that, if genocide denial were to disappear from the world, it would be likely ‘replaced’ by genocide celebration.

Can we actually handle that? We are now going to find out.

Putin’s progress, from KGB man, sword of a state built on denialism and repression of truth, through post-denialist information warrior, to sincere advocate of tyranny and nationalism, is a sobering one.

Now, at least, we know what to oppose. The stakes are clear and cannot be denied.

Not every media organisation can bear criticism, even self-criticism, but others require it to keep going. END_OF_DOCUMENT_TOKEN_TO_BE_REPLACED

Foucault once suggested that Clausewitz’s famous observation, “war is not merely a political act but a real political instrument” carried out by other means, be reversed, with politics made an extension of war. END_OF_DOCUMENT_TOKEN_TO_BE_REPLACED

Brexit will turn three on the last day of January, over six years since the 2016 referendum kickstarted Britain’s race to the bottom. END_OF_DOCUMENT_TOKEN_TO_BE_REPLACED