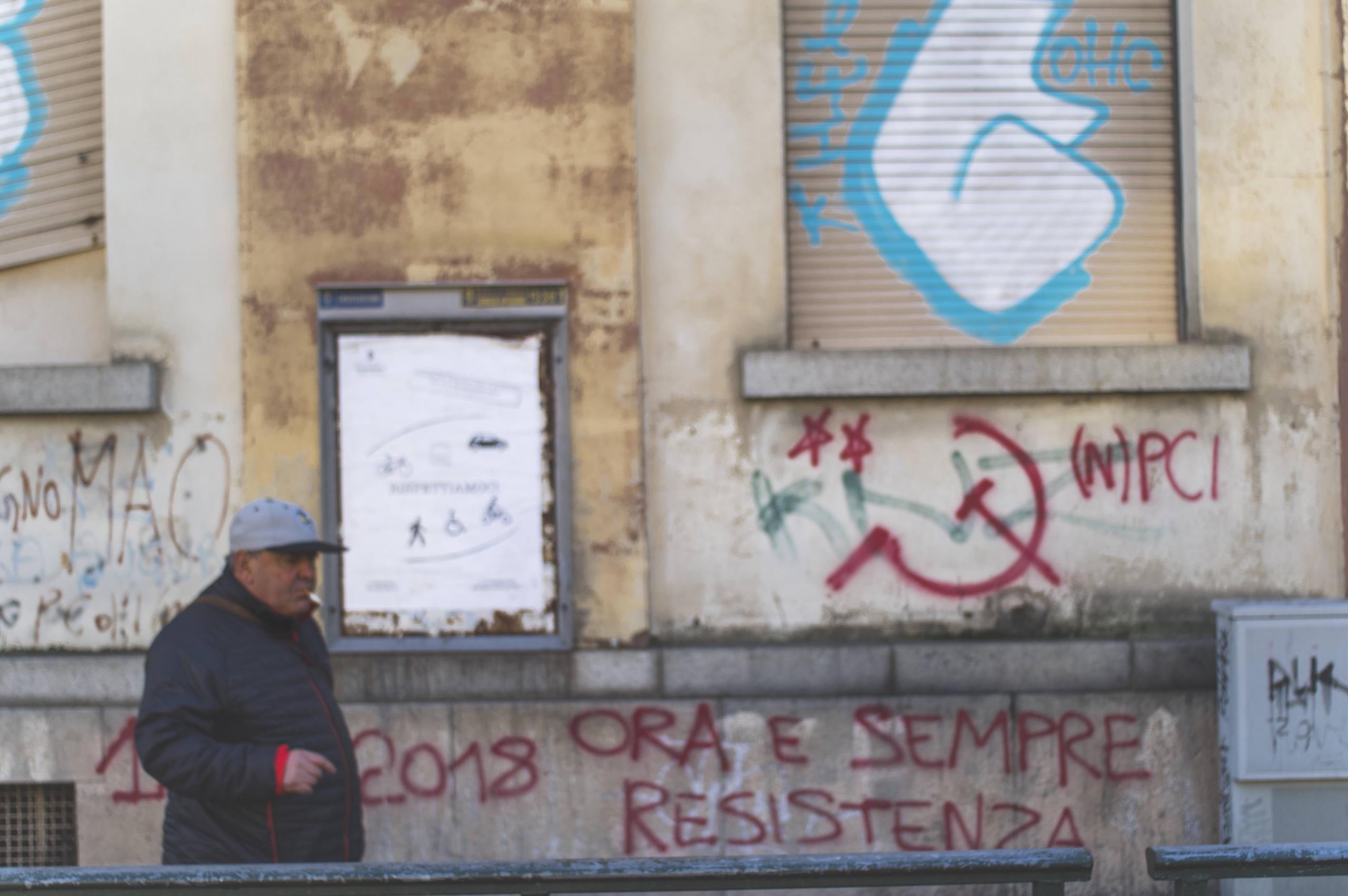 The corpses of security guards lay strewn among broken glass and crumpled cars on Via Fani. A dead body, displayed in fetal position, in the trunk of a red Renault 4 and a dejected, thin-faced man with a wry smile posed before the flag of his captors.

These are the images seared in the minds of Italians old enough to recall the 1978 kidnapping and assassination of Aldo Moro.

They form the Zapruder film for an assassination which rocked Italy the way JFK’s killing had done so to America, leaving behind an even more complex web of unanswered questions as to who was truly responsible, and what it portended for the future of Italian politics.

But how did Moro, a senior intellectual figure on the liberal side of the Christian Democrats, the party of government in post-war Italy, find himself kidnapped, tried and summarily executed by the left-wing Brigate Rosse (Red Brigades)?

After all, he’d been kidnapped en route to the Italian parliament to usher in the “historic compromise” bringing the Communist Party of Italy (PCI) into government as a coalition partner with the Christian Democrats.

Why would a left-wing group assassinate a mainstream, liberal politician who had spent his political capital, domestically and internationally, by bringing the Communists into government with his party? On the surface, it made no sense.

Unless one understands the forces, foreign and domestic which shaped the story of the Italian left since the end of WWII and which by the time of Moro’s assassination would leave it hopelessly divided.

From the time that Moro voiced support for the historic compromise, he was under enormous pressure, much of it emanating from the US. Since 1974, thinly-veiled threats had been issued to Moro from the American government, most specifically from Secretary of State Henry Kissinger: don’t bring the Communists into a coalition with the DC. If you do there will be consequences.

So shaken was Moro by one of these warnings that the deeply religious politician, returning to Italy from Washington, via New York, retreated to St Patrick’s Cathedral to pray where he fell ill.

Both Moro’s daughter and wife would subsequently give evidence of these threats to the Moro Commission which investigated the kidnapping and assassination. The Brigate Rosse members tried for the kidnapping confirmed that.

Throughout the post-war period, Italy had one of the largest communist parties in Western Europe; by the 1960s, the largest. The PCI, having been the most significant party associated with the 250,000 strong Italian resistance during WWII, emerged from the war with a claim to moral authority.

From the highly contested election of 1948 through to the discovery of Moro’s body, the PCI had been slowly moving ever closer to power.

The schisms in the PCI which developed over the question of how closely it should align, for a variety of reasons, with the Soviets were thrown into stark relief by the Hungarian Uprising of 1956. That this became one of the major concerns of the party’s rank and file would cause a generational rift amongst members.

The movement away from Moscow, towards a PCI whose policies became ever more identifiable as social democratic was, unsurprisingly, fraught.

As the winds shifted under different leaders and factions, some of the more interesting leading lights of the party would find themselves expelled, including the redoubtable Rossana Rossanda, of the founders of the venerable Italian left newspaper Il Manifesto, which survives to this day.

On the left generally, both inside and outside the PCI, by the late 1960s, the generational rift was deepening.

In her autobiographical The Comrade from Milan, which is among the best single-volume accounts of the Italian post-war scene, Rossanda captures the mood and mindset of Italy’s student movement:

“….they seemed to have been nursed at the Frankfurt school with its radical critique of the tolerant consumer society — during Italy’s 1968, (Herbert) Marcuse had been the most widely read author […]Marcuse changed the revolutionary subject from the working class, in whose name the lukewarm parties of the left continued to speak, to one that was not proletarian and progressive but marginalized and anti-developmentalist: the students, a cultured depreciated mass who could not and did not want to become the new generation of leaders of the establishment, felt as if they were the brothers and sisters of these alienated people.”

The radicalisation of the student movement meant a break with the institutional left, specifically, the PCI. Rossanda describes it as nothing less than a revolution:

“….the lava poured down over the PCI as if it were Pompeii. Not that the students insulted the communists, they didn’t, but they ignored them, which the party found really annoying.… [By] February, the communist university branches, which were usually the first and by and large the only people who fought the fascists, felt they were being ridiculed: the students set off without them and ahead of them.”

As Alessandro Silj sets out in his 1979 account of the origins of Italian terrorism, Never Again without a Rifle, US interference in Italian politics, through, for example, Operation Gladio’s Strategy of Tension, was one of several factors leading to the rise of left-wing terrorism in Italy.

The disillusionment among young Communist militants and others with the new social democratic line of the PCI played a major role, inspiring members of the student movement to become urban guerrillas.

Dissatisfaction with the ruling coalition of Christian Democrats and Socialists was also felt outside militant circles of the centre-left government.

The coalition had failed to deliver most of the promised social reforms. It was the end of the Italian “economic miracle” and domestic crises were growing. This contributed to the view that the time to press for revolutionary change was now.

The unusually violent labour protests and clashes with the police in the “hot autumn” of 1969 contributed to the view that Italy’s capitalist society was undergoing its most serious crisis ever and that armed struggle would make its collapse inevitable.

While Silj takes the view that the PCI still had some credibility with the students, by 1977 things were so bad that Luciano Lama, one of Italy’s most prestigious Communist leaders and the head of CGIL, the country’s largest labour union, was assaulted and removed from the University of Rome campus when he attempted to hold a rally.

All of this occurred against a background of resurgent fascist violence with the ever-present threat of a coup from the right.

Though the Golpe Borghese plot of 1970 may be said to have had some buffoonish elements, on at least three occasions between 1969 and 1974, the PCI issued “state of vigilance” alerts, warning its cadres to go underground to avoid getting rounded up in the event of a military coup.

Among much that remains murky and contested, one contention, which is likely true, is that the PCI of 1978, in coalition with the Christian Democrats, would have been immune to Soviet influence.

The promise of the “historic compromise” would have provided a real first glimpse at a truly ‘Third Way’ European socialism, one far to the left of Tony Blair’s reformist, Thatcherism-lite.

The decision of the Brigate Rosse, under the leadership of Mario Moretti, to forestall that outcome negated that possibility and affected everything in Italian politics that came thereafter.

Following the death of Moro, the master Machiavellian, Italian Premier Giulio Andreotti, refused to allow the PCI genuine participation in the government they were supporting and the coalition was dissolved in 1979.

The Italian Socialist Party, led by Bettino Craxi, would come to power in 1983 and lead a coalition government until 1986. A yearlong return to Socialist government in 1992–93 would be thwarted by the Tagentopoli scandal. It provided the only pause on the road to power of Silvio Berlusconi, assisted in no small part through decrees passed by Craxi legalising his TV networks.

Much of the left would reconstitute itself in 2007 as the Partito Democratico and cycle through three post-downturn premierships but lose power due to an inability to deliver promised constitutional reforms amidst the still poor economic climate and the unpopularity of Matteo Renzi.

All of which has contributed to the frustrating inability of the Italian left, large in numbers and often politically erudite, to unite long enough to usher in real change.

It offers a salutary lesson for today’s left elsewhere, particularly in the UK and the US. As the left in Italy and elsewhere in Europe seeks to attract younger voters it would do well to heed the lessons of the generational divide that contributed so heavily to the late 1960s schism.

The environment, the future of jobs in the new economy, the protection of civil rights concerning questions of identity are on the minds of younger voters.

That Cinque Stelle’s only viable option of entering government was to join forces with Matteo Salvini’s far-right Lega party speaks volumes about the inability of the left to unify under a single banner and achieve the power it so desperately needs to affect real change.

After the PCI won 26.9% of the vote in the 1969 election, the US ambassador to Italy, Gardner Ackley, attempted to contextualise the result by reporting to Washington that the Communists of 1968 were no longer the radicals they’d been in 1948.

Their revolutionary ideas and subversive attitudes had been softened since then, as the party had entered a number of city and provincial governments, Ackley explained. Nevertheless, he called the poll result “appalling”. The PCI had undeniably grown.

A memorandum of a September 1974 White House meeting between President Gerald Ford, Kissinger, President Giovanni Leone and Moro, then serving as foreign affairs minister, records Ford saying that Italy could not remain in NATO if the Christian Democrats formed a coalition government with the PCI.

“They are trying to be moderate and many people believe that the Communists are Social Democrats, even businessmen think so. The Communists appeal to all classes […] People listen to them and perceive them as part of an ongoing process, in line with détente… What you should remember Mr. President is that not everyone who votes Communist is Communist. Many of them are in favour of freedom, all the freedoms.”

According to former education minister Giovanni Galloni, in September 1974, Moro and President Leone were approached by Henry Kissinger at an event at the Italian consulate in New York.

Galloni says that Kissinger told Moro, “I am not a Catholic and I don’t believe in dogmas but I cannot understand your approach to politics and I consider it a very negative element.”