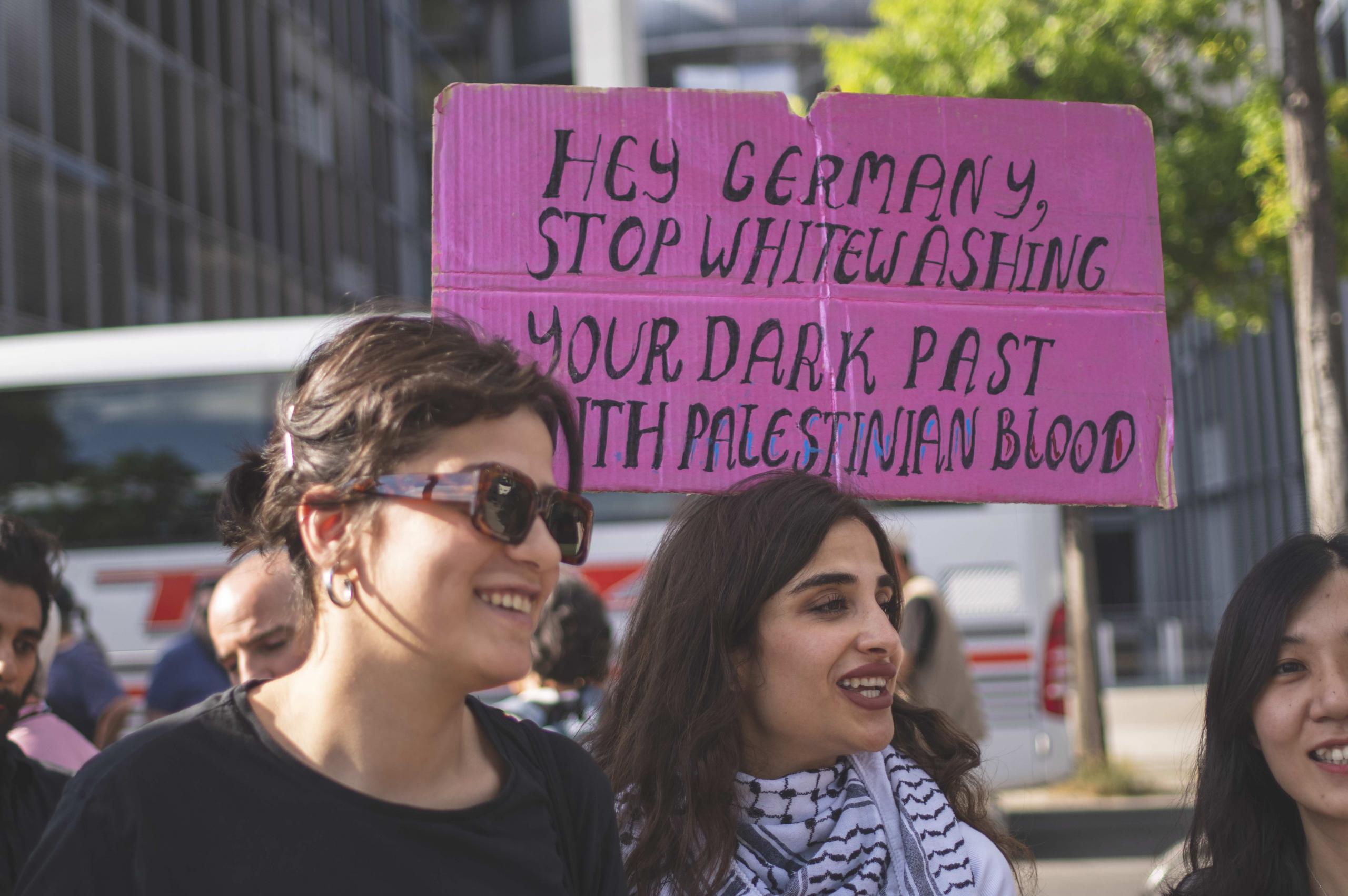 Notes From a Demonstration

No country, apart from the United States, is as riven with debate about its relationship with Israel as Germany.

The reasons are obvious. But the enthusiasm shown for the Jewish state has been more cautious. Some might even say, since Bonn first exchanged ambassadors with Jerusalem, in 1965.

It was the eve of the German student movement, which, in the wake of the 1967 Six-Day War, would become heavily pro-Palestinian.

Inevitably, Israel’s occupation of Palestinian territories became bound up with German criticism of the conflict in Vietnam and Germany’s support for the US during the Cold War.

For many Jews, German leftists would take over responsibility for Antisemitism from the Nazis, following the 1976 hijacking of an Air France airliner from Tel Aviv to Entebbe by the Baader-Meinhof gang, with the Popular Front for the Liberation of Palestine (PFLP).

Hot on the heels of the attack on Israeli Olympic team athletes in Munich four years before, in which 11 members were killed, the German role in the hijacking was particularly galling.

Neo-Nazis had collaborated with the Palestinians who carried out the attack and the Palestinians had demanded the release of Andreas Baader and Ulrike Meinhof in exchange for the athletes. But they hadn’t led the operation, like at Entebbe.

Though there have been no equivalent terrorist acts carried out against Israelis or Jews by German radicals since the 1970s, the memory of that decade still hangs heavily over German politics.

Less than thirty years after the Holocaust, Germans had confirmed that they still harboured Antisemitic tendencies, through their willingness to support pro-Palestinian terrorism.

Whether this was universally true or not is debatable. While there is Antisemitism on the left, German criticisms of Israel tend to vary. Some indulge stereotypes, some do not.

It’s the legacy of the Holocaust makes their criticisms more vulnerable.

Hence the difficulty in advocating for Palestinians in today’s Germany. All gestures of support are routinely subject to intense levels of scrutiny for racism.

The most recent example is the controversy surrounding the Bundestag’s 17 May passage of a non-binding motion to designate the Boycott, Divestment, Sanctions (BDS) movement as an entity that uses Antisemitic tactics to further its agenda.

Die Linke, the country’s largest far-left party, descended from the DDR’s former Communist governing party, voted against the motion, though it supports the banning of BDS.

Curiously, the far-right Alternative für Deutschland (AfD) abstained, though the party claimed to be against it. Some, however, doubt the claim was sincere, given the insincere support fascists have extended to Palestinians in the past, for example, at Munich.

On Friday (28 June), The Battleground attended a demonstration against the anti-BDS motion in front of the Bundestag, at the Platz der Republik. Hosted by Palästina Spricht, the event was well attended but modest.

Under heavy police protection, participants delivered speeches to the crowd in Arabic, English German and Hebrew. A few yards away, a tiny counter-demonstration took place, led by Israeli flag-waving Germans.

The photographs in this piece provided a good sense of the emotions that continue to inform German views on the Israeli-Palestinian conflict and why resolutions like that passed in May are often controversial in Germany.

With 80,000 Palestinian residents, Germany is home to the largest community in Europe, while up to 40,000 call Berlin home. Compare that to the size of the Jewish community, in 2017 estimated to be 100,000 by the Central Council of German Jews.

Under such demographic circumstances, debates about Israel are especially heated, though they aren’t necessarily qualified in such terms, as many of the country’s Palestinian residents are refugees or third-country nationals on visas, and not consistently naturalised.

Still, such parity in numbers will only grow in importance over time, forcing Germans to carefully consider how to respectfully balance their historical debt to its Jewish community, with its growing obligations to its significant Palestinian community.

Allowing such demonstrations to take place, in front of the Bundestag, the seat of German democracy, is a good start.

Joel Schalit is editor of The Battleground. Photographs courtesy of the author. All rights reserved.