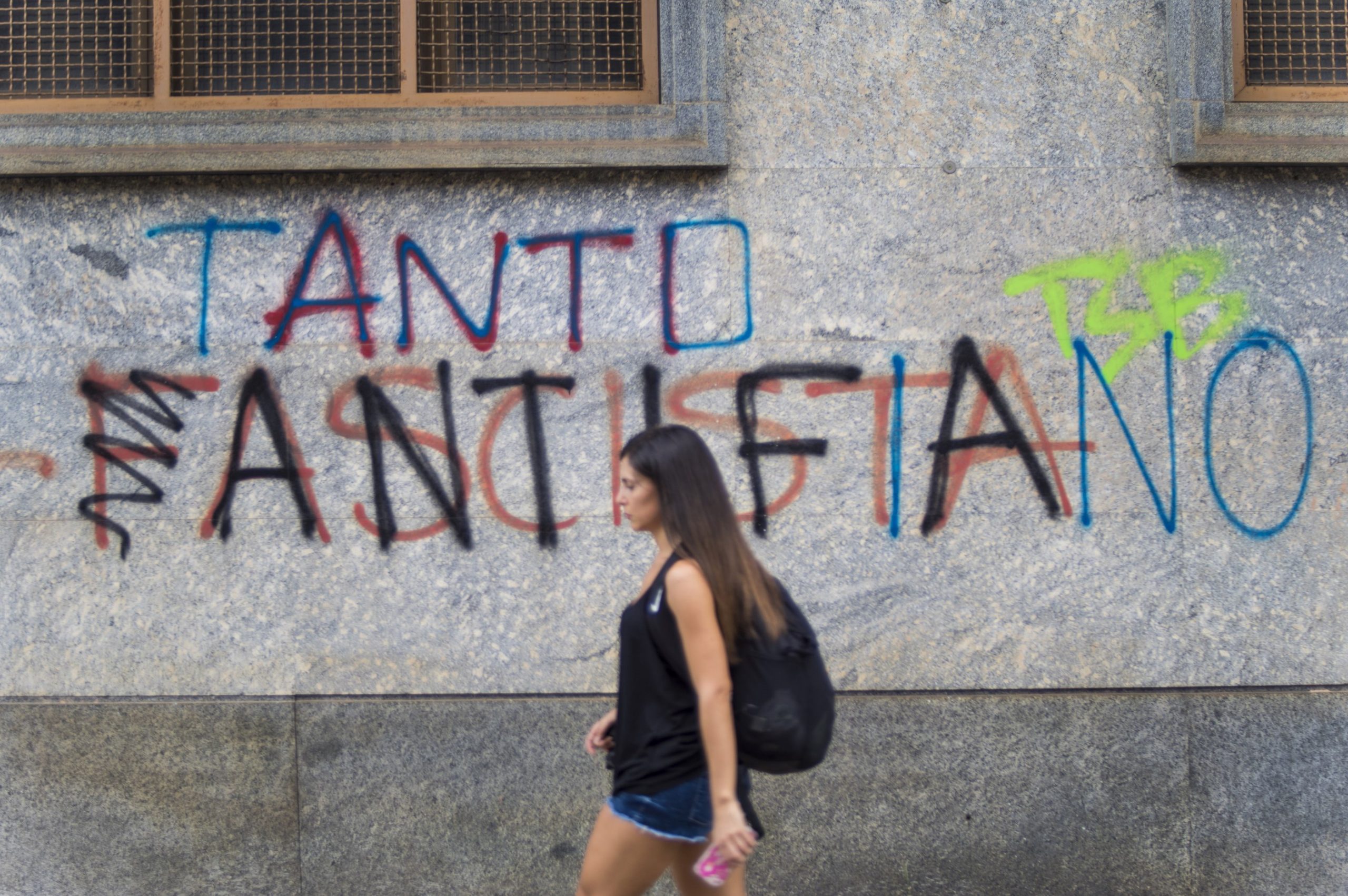 So much fascism and anti-fascism. Turin, August 2019.

Blaming the Left for Terrorism

The United States is having its third wave of “Antifa panic” in as many years. Donald Trump’s 27 July tweet called for Antifa—short for antifascist activists—to be declared “a major Organization of Terror”.

This produced a pushback, especially in Germany, sending #IchbinAntifa trending on social media.

Antifa is not an organisation at all, but a decentralised, leaderless movement that opposes fascism and the far-right. Although most of its work is legal and non-violent, the movement is best known for occasional street fights with extremists.

Recently in the US, Antifa has become a bogeyman among conservatives, like 1950s anti-Communism.

Numerous conspiracy theories have moved into the conservative mainstream and today Trump repeats propaganda that, until recently, could be only heard among neo-Nazis.

These conspiracy theories include claims that Antifa was going to start a civil war; caused a train derailment; desecrate graves, and inspired a mass shooter.

In the US, Antifa is often seen as a European import – Antifa’s two-flag logo was introduced by the Communist Party of Germany’s Antifaschistische Aktion in 1932 – but America has a long tradition of this kind of militancy.

In the United States, Antifa is a continuation of Anti-Racist Action (ARA). Founded in the late 1980s, it was a loose network of local groups. Their approach focused on forming “crews,” mostly of young men, to fight Nazis at punk rock shows.

The ‘00s and ‘10s were a low tide for white nationalists, but some used this downtime to change approach.

At the same time, and also influenced by European politics, their opposition was also morphing.

In 2007, Portland, Oregon’s Rose City Antifa became the first group to use the “Antifa” name.

There was also a move away from the ARA approach, and here German Antifa was influential. American Antifa groups started paying closer attention to issues like left-wing Antisemitism.

They recalibrated to become a political movement capable of larger mobilisations and positioned close to immigrants’ rights activism.

The most effective Antifa tactics became doxxing—revealing personal information about someone online; and de-platforming—pressuring private companies to stop servicing far-right groups. These include digital platforms and financial services.

Doxxing and de-platforming, like the vast majority of Antifa work, are non-violent and legal—that is, unless Trump gets his way.

The new wave of Antifa was catalysed by a 20 January 2017 protest at Trump’s inaugural rally in Washington, DC.

Here, the traditional left-wing inauguration protest included a black bloc—a normal occurrence, comparable to European May Day rallies. But the black bloc was branded as “Antifa.”

Nearby, Alt-Right leader Richard Spencer was punched on camera, and the video went viral.

During this time, the Alt-Right turned from an internet phenomenon to a force capable of large street mobilisations. A series of clashes between far-right and radical left protestors kicked off around the country.

This continued through August 2017, when a fascist-led rally in Charlottesville, Virginia ended with a car attack on an Antifa march.

;
One person was killed and about 30 others were wounded.

Antifa’s reputation has bounced up and down in the press. Praise after the inauguration protest was followed by disparagement, and post-Charlottesville adoration was followed by condemnation. The current wave is the third round of mainstream attacks on Antifa.

Portland, Oregon has been a main site for clashes. Currently, the largest far-right group active in them is the Proud Boys.

The Proud Boys claim to be a men’s social club, but their rules require members to engage in violence to advance in rank. And they have been accompanied by a new breed of far-right propagandists who live stream events.

Far-right propagandists claim to have journalistic privileges when they walk into opposition crowds, intentionally antagonising them.

At a June 2019 far-right rally in Portland, Andy Ngo—an Islamophobic, far-right propagandist—waded into the counter-protest. His previous “journalism” included amplifying a fake study of journalists who supposedly were connected to Antifa, which in turn inspired a neo-Nazi kill list of the same writers.

Irate leftists, seeing Ngo, promptly expelled him, striking him in the process, and he was taken to a hospital. Afterwards, he claimed Antifa was attacking “conservative journalists” in general, setting off a new round of Antifa panic.

Violence in the US not comparable to Europe. Firearm ownership is widespread. In 2019 alone, 125 people have been killed in twenty-two mass shootings. But political violence is taboo.

Molotov cocktails and cobblestones are almost never thrown at police. The penalties for even touching them are harsh; in 1999, one protestor received a  seven-year sentence for hitting a policeman officer with a rock.

Occasionally a black bloc will smash windows and graffiti property, which happened at the January 2017 protest.

There, a car was also burned. It was one of a handful of instances of such an event happening at a left-wing demonstration in the US in thirty years.

In comparison, far-right violence is astounding. In 2019, all fifty US extremist murders had far-right connections.

Counts vary, but since 1990, between 500 and 700 people have been murdered by the far-right in the United States. During the same period, Antifa-style activists killed one, a Nazi skinhead who died during a 1993 fight in which both sides were armed.

Trump’s Antifa tweet followed the introduction of a non-binding resolution to the Senate “calling for the designation of Antifa as a domestic terrorist organization”.

The resolution co-sponsored by Senator Ted Cruz, who also asked the FBI to start a RICO investigation—a powerful anti-racketeering act designed to tackle organized crime—against Antifa. Trump’s tweet was in support of those initiatives.

Cruz himself is sympathetic to far-right militias. An Antifa website even points out the language in his resolution appears to be lifted from a petition written by the Proud Boys’ leader—who Cruz was recently photographed with.

The resolution itself refers interchangeably to “Antifa,” those “affiliated with Antifa” and “left-wing activists”.

The examples it gives are primarily of activism around immigrant detentions—not Antifa actions. If the FBI used its vast anti-terrorism capabilities on the actors referred to in the resolution, left-wing activists of all stripes could be suppressed.

The main tool is the 1996 Anti-Terrorism Act, but it only lengthens convictions under existing laws.

Since 9/11, there has been an expansion of domestic terrorism investigations, partly enabled by the PATRIOT Act of 2001.

The Muslim community has been specifically targeted, including many cases of entrapment and even for providing aid to Gaza charities.

The FBI can also, without oversight, investigate political movements as “domestic terrorists.”

For example in 2005 the FBI’s domestic terrorism head said that “The No. 1 domestic terrorism threat is the eco-terrorism, animal-rights movement.” These activists destroyed property—sometimes spectacularly—but did not injure or kill anymore.

But the terrorism enhancement ended up adding decades to the sentences of those convicted. Going after activists who were not using weapons or bombs was a big step in expanding the scope of what “domestic terrorism” meant. But only a few US NGOs bothered to even protest.

As improbable as it seems, in Donald Trump’s America it just might stick.

It is not an exaggeration to say that Antifa groups are holding back a tide of far-right violence.

Certainly, Trump is not. His extremist base is desperate to have federal authorities remove Antifa groups so that they organise freely, without counter-demonstrations, de-platformings and doxxings.

There is almost no other NGO grassroots organising to counter street-level far-right groups. (National NGOs do monitor them and use lawsuits.)

If everyone working under the banner of “Antifa” is suppressed under the rubric of domestic terrorism, the far-right will dominate the streets.

Since Cruz’s resolution was introduced, twenty-three people have been killed at two separate mass-shootings in the United States: three at a garlic festival in Gilroy, California and twenty at a Wal-Mart in El Paso, Texas. Both shooters had far-right ties.

Some international pressure would do well to remind the president that—the political fantasies of his base aside—America is still part of a larger world that expects it to hold to basic standards of political freedom.