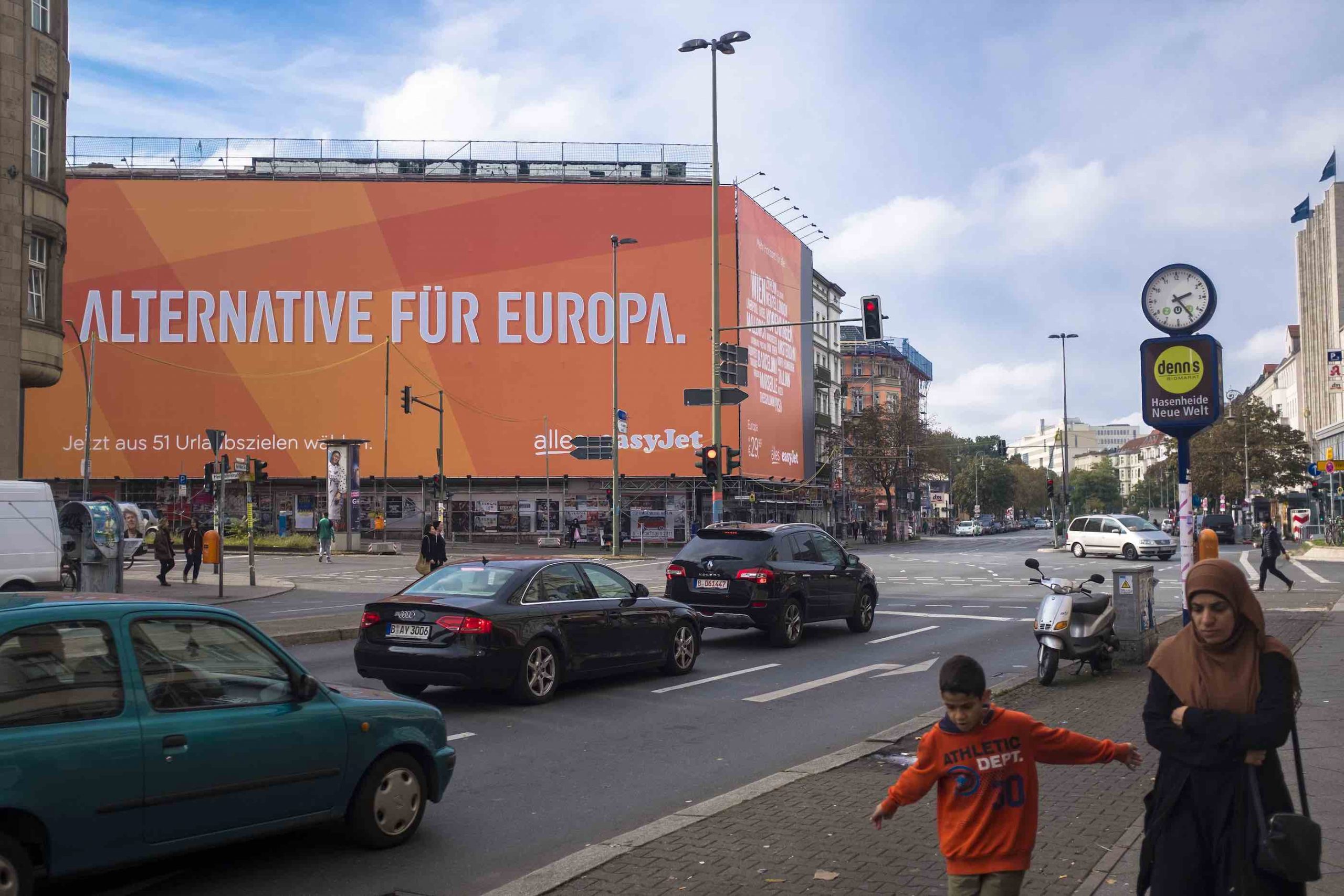 Capital of everything. Neukölln, October 2018.

The Soundtrack is Berlin

If you came to the new Oval album Scis without any prior knowledge of its creator, you would likely be struck by its innovative approach to electronic music-making.

Although individual songs are propelled by the sort of minimal repetitive rhythmic figures that electronic dance music (EDM) subgenres have made familiar, it soon becomes apparent that they are not structured according to any idiom recognisable in clubs and festivals.

You can dance to Scis, surely, but doing so well would require the reconfiguration – and sometimes the outright suspension — of your kinetic habits.

The fourth track “Pushhh” opens with layers of breathy voices, suggesting that it might settle into the sort of sexy groove familiar from Ibiza to Seoul. But the sense of imminent climax soon gives way to a tension that retreats from release, as one element after another is piled on, creating an effect of perpetual collision.

Three songs later, “Improg” uses a similar process of sonic accumulation to achieve mellower results. While it is easier to follow a beat through the mix, however, the repeated addition of new rhythms soon makes the prospect of moving in time to the music seem like a perverse stress test.

Part of what makes Scis so compelling is this sense of refusal. Even when experienced in an informational void, it still communicates a reluctance to play by the rules of electronic music-making.

Thankfully, we live at a time when this kind of ignorant listening — once a common feature of popular music consumption — is no longer necessary.

Although never approaching bestseller status, Oval has been around for a quarter-century. And its co-founder and sole permanent member, Markus Popp, has given numerous interviews of unusual clarity and rigour.

When he first began releasing music under the Oval name, reviewers would sometimes send his records back to him, complaining that they were defective.

Their reaction was understandable, given that Popp derived the source material for his computer-facilitated collages, not from conventional samples and presets, but the strange sounds made by compact discs when they fail to function properly.

Significantly, Popp’s sourced the “glitches” on those early records not from discs with manufacturing defects, but ones he and his collaborators had defaced in order to make them play back incorrectly. His aesthetic depended on a kind of conceptual violence.

As Popp explained in a 1996 interview for Pulse magazine by Marc Weidenbaum, founder of the pioneering website Disquiet, the point of this undertaking was not the making of music so much as its unmaking.

Popp describes the purpose of Oval as making “‘some new distinctions clear — and, in a way, to go beyond the music concept, the music metaphors underlying the concepts used in the digital instruments involved.’ If this required separating the terms “electronic” and “music”, so be it.

Where did this animus against electronic music come from? At the time, Popp’s adopted home of Berlin was in the throes of a massive reconstruction project for which the synth and sample-driven tracks played in all-night clubs served as a soundtrack.

Reunited Germany was surging with rediscovered strength, though now transmuted primarily into economic terms. And the techno-fetishism of the 1920s and 1930s, when progress was decisively severed from the residues of humanism, found itself echoed in this hedonistic culture.

To be sure, West German artists of the 1970s had already explored this terrain extensively. Whereas the almost childlike purity generated by Kraftwerk’s purpose-built synthesisers and the aesthetically parallel guitar-based Motorik of Neu! had communicated an ironic detachment about the relationship between technological and political progress, the burgeoning EDM scene of 1990s Berlin seemed more arrogant than self-aware.

The insistence that this music represented the future – not to mention that it was, in fact, music – clearly rankled Popp. That explains why, even after he began to expand his sonic palette, Oval always retained a dimension of negative aesthetics.

In a 2002 interview for Punk Planet magazine that I conducted, following the release of the more sonically varied – and accessible – Ovalcommers album, Popp emphasizes his repudiation of technological perfectionism:

“‘The finished track should provide enough of an element of imperfection so that listeners can perceive that something is missing, so that they can bring their own expectations to the track. It’s not about making this “high art” type of music. I have always wanted to maintain a more provocative approach that makes people say “I can do that – anybody can do that. These sounds are made with 10 broken CD players, they’re running completely out of sync, there’s no discernible musical or compositional quality to it.” But then they listen to it more and start to understand how everything is working together.’”

Popp’s longstanding ambivalence about music, as opposed to sound more generally, still comes through on Scis. But no matter how surprising the album is – or how much it frustrates listeners who prioritise danceability – it is hard to imagine reviewers complaining that the tracks are defective.

For one thing, almost no one will be listening to it on CD, eliminating the spectre of mechanical failure. Even if someone were able to hear the record that way, however, there is too much sonic information being communicated to believe that something has gone awry with one’s machine.

What we are left with instead are tracks that defy our expectations in more subtle ways.

On tracks like “Impecco” the restlessness Oval records are famous for is sufficiently muted to call the more listener-friendly experiments of Mouse on Mars to mind. Opener “Twirror” starts with an almost hippyish drone, then proceeds to shamble forward like The Notwist for a full two minutes.

While Popp still inclines towards structures in which the relationship between tension and release is strained to the breaking point – “Twirror” eventually takes a sharp turn into cacophony – he seems more willing to delineate continuities with other German artists of his generation.

In contrast with Oval’s early work, Scis invites the sort of repetitive consumption that prioritises pleasure. Although the record is still conceptually robust by the standards of most contemporary music-making, it does not insist that listeners always be thinking about how it was made. While this may seem like a welcome development, however, Popp’s drift towards common ground threatens to blunt his cutting edge.

Perhaps this represents a response to the recent history of his hometown. The future promised in the 1990s may have arrived, but not in Berlin. Instead of the high-tech haven that boosters relentlessly promoted, it is a volatile and – at least by German standards – dirty place where success is less the product of ingenuity and hard work than structural privilege. And technological advances have largely exacerbated the city’s problems.

If Scis is more willing to reach across socio-economic and musical divides, it may be for the simple reason that the imperfections that Markus Popp once felt a need to highlight are painfully obvious for everyone to see.

In such a historical context, striving to make beautiful sounds from odds and ends no longer seems a commentary on technological fallibility but a way of acknowledging that people still have the power to change history, even if the circumstances they confront are far from ideal.