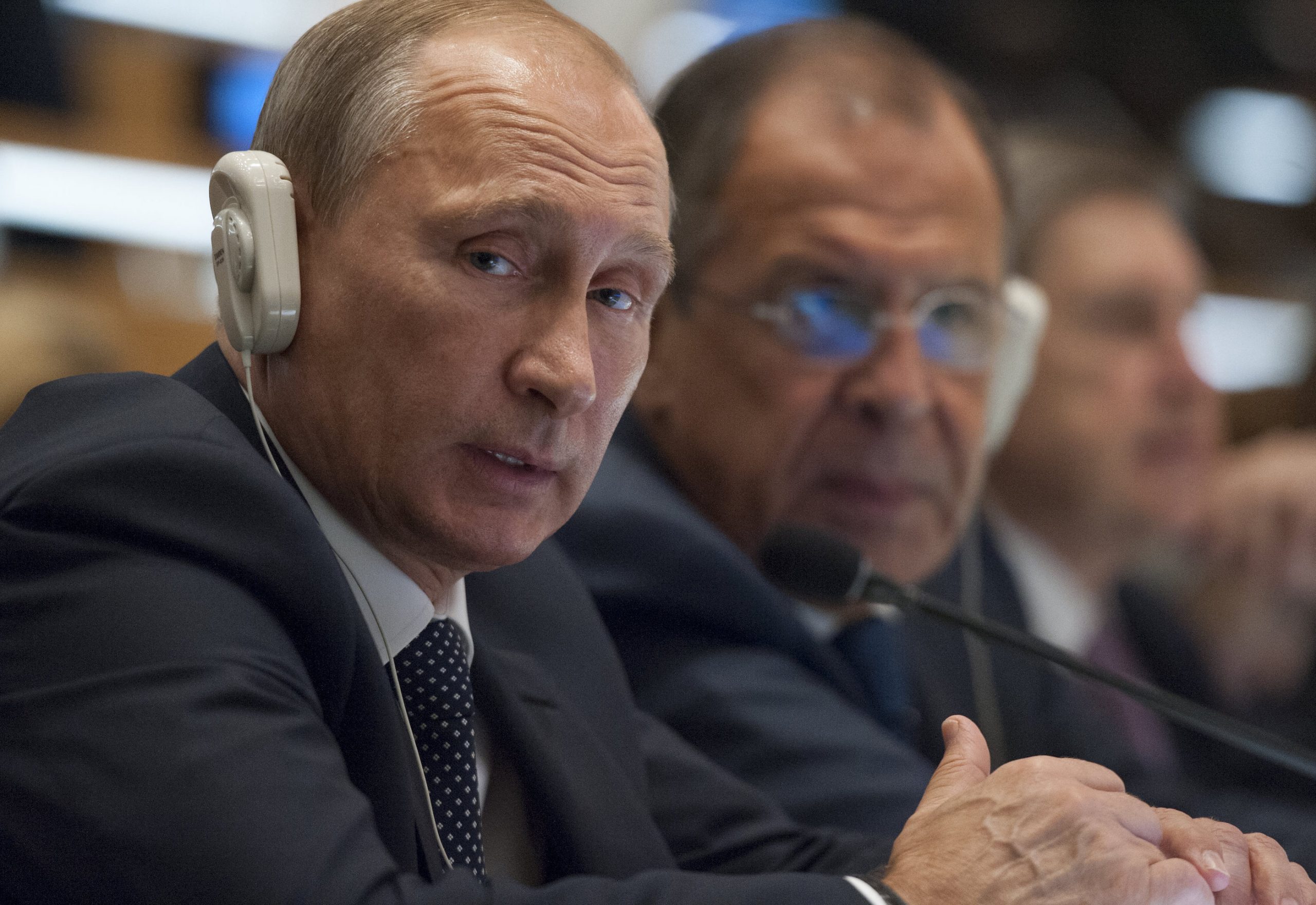 Product of the System

Everyone loves a good villain, especially one whose presence validates overlooking our own failings.

From Brussels to Washington, Vladimir Putin is straight from central casting, a ham-fisted autocrat whose overweening desire for power is matched only by his hilariously overblown public persona.

This was true even before the United States was being run by a man viewed as a buffoon even by a fair number of his own supporters.

In the era of Donald Trump, Putin makes an excellent bête noire, one that can act as a repository for the surplus shame generated by the fact that the country is being run like a reality television show.

For the past three years, moderate political opinion in the United States has been in search of a tipping point at which the misdeeds of Trump will finally exceed the tolerance of enough of his abettors that he will be chased from office and the stain on the national escutcheon wiped clean.

Vladimir Putin played a central role in this moderate imaginary. He was the manipulator of a highly vulnerable American political culture and, at the same time, a sort of KGB certified Svengali leading astray an American president who was a foreign policy naïf.

Putin’s ill name has a long provenance in American political culture, and certainly not totally without reason. Yet as the journalist Tony Wood points out in the new paperback edition of Russia Without Putin, it is all too easy to coalesce all the deficiencies of the Russian system into the person of one man.

Vladimir Putin is easy to fixate on: the dour former spy doling out favours and dosh to his friends and occasionally finding pottery shards on the floor of the Black Sea (or, if social media is to be believed, riding a unicorn).

But the system that exists in Russia today is not of Putin’s making. If he has, to a greater extent than any of his competitors, managed to work out and exploit its logic, it is nonetheless a system that he has mastered rather than created.

The current politico-economic order in Russia, whether one wants to characterize it as oligarchy or kleptocracy or what have you, arose out of the collapse of the previous system and benefitted in important ways from a number of holdovers from it.

As Tony Wood points out, it is common for Russia’s current state to be characterised as beset by holdovers from the Soviet era which, if they could but be overcome, would give way to a healthily functioning market economy similar to those in the neoliberal Atlantic region.

In this narrative, Putin plays a key role as a former apparatchik who surrounds himself with others of like character. Wood invites his readers to think less about the man and more about the system that he inherited from Boris Yeltsin.

Rather than a state beset by having insufficiently transcended its collectivist past, Russia has developed a thoroughly capitalist culture, one unfettered by squeamishness about the methods that one might use to shift market outcomes to benefit some rather than others.

The most common error is failing to recognize the degree to which such practices are implicit in the logic of capitalism, rather than just Russian culture.

There are two dimensions to the status of Putin in the Western critique of Russia. Latitudinally, he is the leader of a corrupt failed state in which emoluments are distributed to the friends and cronies.

Those fighting for a more just and equitable system are left out in the cold, or forcibly sidelined, or (as in the case of Anna Politkovskaia and a number of other investigative journalists) physically eliminated.

On this view, the political emptiness of Russian “managed democracy” is merely an expression of the degree of control exerted by oligarchs for whom voting is nothing more than a periodic pantomime put on for the benefit of the foreign press and political classes.

Longitudinally, Putin is viewed as a latter-day promoter of the sort of Russian imperialism that characterised the Soviet period, especially in the early decades of the Cold War.

According to this reading, Putin, under the influence of both a post-Soviet hangover and of the ideology of Eurasianism promoted by the likes of Alexander Dugin, is the author of campaigns of shameless expansionism from Chechnya to Georgia to Ukraine (and later on perhaps even the Baltic states).

Both narratives contain elements of truth. Yet both also obscure key facts.

When Putin came to power in 1999 he wanted nothing more than closer relations with the West (perhaps even extending to membership in NATO).

But, he was brusquely rebuffed, with the United States making clear in fairly short order that it intended to expand NATO even to the very borders of Russia itself.

This is hardly surprising, given the still-recent collapse of Soviet hegemony in Eastern Europe. But this dynamic is easily forgotten, leaving only Putin’s feelings of anger and disappointment as a sort of festering, baseless animus against the West.

From the perspective of current conditions in the country, we are once again dealing with a situation in which Putin’s role serves to obscure that of the underlying system.

Russia’s political and economic organisation look out of kilter with the norms of the West, until one recalls that it is primarily a resource exporter and, perhaps even more crucially, that this primary resource is oil.

There is a strong literature on the topic of the role of oil in inhibiting transitions from authoritarian to democratic states.

Russia’s resources were sold off at deeply discounted rates during the Yeltsin era. Once the banking sector was weakened by the series of crises culminating in the collapse of 2007-8, the field was left to operators whose wealth was founded on resource extraction.

This created a pattern typical of autocracies which draw a large proportion of their income from petroleum exports.

While it seems clear that Russia did make some systematic efforts to achieve that outcome, precisely how influential these were remains an open question.

As Hal Roberts, Robert Faris, and Yochai Benkler argued in Network Propaganda, rightwing information ecology in the United States was probably a more productive influencer than anything undertaken by Putin’s minions.

Forty years of fear and loathing is a hard habit to break. Both mainstream liberals and conservatives are predisposed to view Russia as an enemy, if perhaps not in the same measure or degree that the Soviet Union was.

The shock of Donald Trump’s electoral victory sent the political classes in the United States into a search for some sort of fifth column that could explain it, and Putin’s Russia fit the bill.

The narrative gained force in no small part because Trump clearly viewed himself as having interests homologous with those of Vladimir Putin.

The coquetting of various members of the Trump political team during and after the election was viewed as evidence of undue influence, but could just as easily be read as a sharing of common goals.

Putin need not be exerting any kind of sub rosa influence on Trump or his associates. Putin is white, male, and not a huge fan democracy, all of which put him on a common wavelength with his American counterpart.

One often hears statements to the effect that if Donald Trump and Vladimir Putin could just be disposed of, some sort of healing could begin.

While not wholly without merit, it is worth remembering in both cases, they’re just products of the political and economic systems that they have come to lead.

Russia without Putin is likely to look a great deal like Russia with Putin, especially given that many of the main opposition figures (such as Alexy Navalny) embody many of the same malign characteristics of the current leader.

Tony Wood’s book encourages its readers to look beyond the personages involved and ask the question as to what the conditions are that gave rise to them and have kept them in power. This is particularly true in the case of Vladimir Putin.

As Wood notes in his conclusion, “Russia’s imitation of democracy is capable of reproducing itself whether Putin is in charge or not.”

While the Coronavirus pandemic and its attendant economic slowdown for the world’s petrostates may undermine Putin, it doesn’t pose a serious challenge to Russian politics.