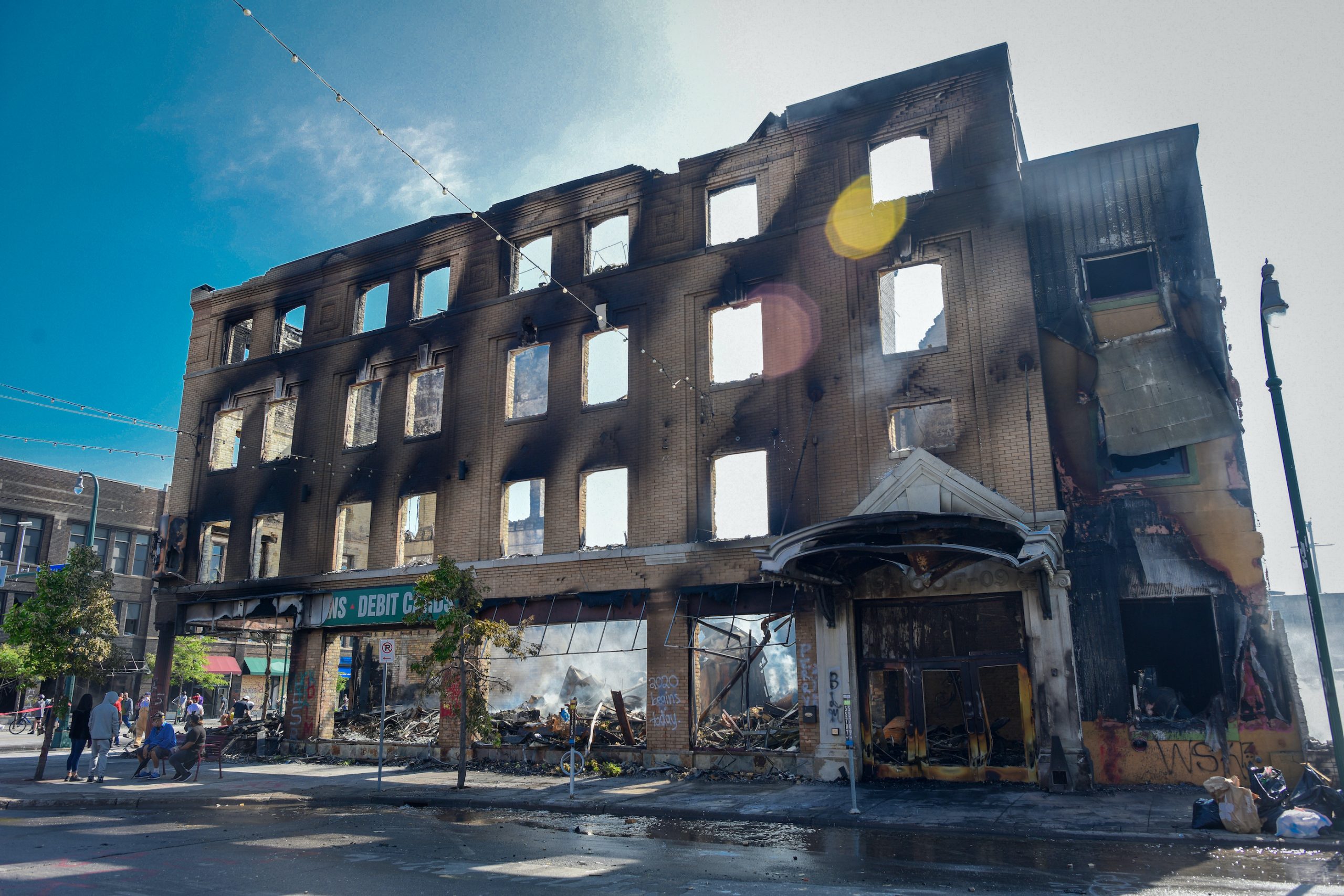 Blaming it on Antifa

The year 2020 has been filled with wild plot twists, from the Coronavirus pandemic to a national uprising against white supremacy in the United States.

One of the strangest twists has been the anti-fascist movement being thrust back into the spotlight.

This is because President Donald Trump has scapegoated Antifa and anarchists for fomenting what is, in reality, a spontaneous-but-African American-led rebellion against white supremacist policing, the likes of which the country has not seen in decades.

The rebellion is so powerful it is approaching the riots that rocked American cities in the 1960s.

In the last week, Trump has taken to blaming “Antifa” and “anarchists” for the violence and looting. This is actually occurring, albeit on a much smaller scale than the right-wing media portrays.

While activists from both movements are involved in the protests, overall they are rather minor players. If these activists were removed from the streets, the protests would look essentially the same.

This is the fourth wave of “Antifa panic,” where American conservatives have demonised the anti-fascist movement, making it into the subject of national discussion.

Pundits are rehashing their same arguments about whether Antifa is good, bad, or terrorists.

But the discussion is absurd to even have. Antifa is a red herring, which the president is dangling to distract attention from the pink elephant in the room.

It’s not just that there is a massive, angry wave of resistance to the police murder of African Americans crashing through the nation.

The system is losing control on the streets. The legitimacy of America’s political structure is slipping away.

Donald Trump and his cronies are desperate to blame someone for this, but also to do it without further antagonising African Americans. Cue: Antifa.

This kind of scapegoating has a long pedigree in the United States and is directly based on imported European Antisemitic conspiracy theories.

The Protocols of the Learned Elders of Zion was first published in the United States after the Russian Revolution and the first edition named Bolsheviks—instead of Jews—as the agent of the conspiracy.

Quickly, though, it became a “Judeo-Bolshevik” plot, and this formulation had a deep influence on the original Nazi party in Germany.

After WWII, the narrative popped back up in the United States as conspiratorial anti-Communism, made famous by Senator Joseph McCarthy and later spread by the John Birch Society.

It quickly found a new target: the Civil Rights movement of the 1950s and 1960s. Claims that Martin Luther King, Jr. was a Communist dogged him and are still in circulation today.

The “Antifa” movement that is described in right-wing fever dream articles is nothing more than a new coat of paint on the same red-baiting conspiracy theory used against leftists in the 1950s and Jews in the 1920s.

The real existing anti-fascist movement in the United States is comparatively small, and in only a handful of cases has pulled off demonstrations drawing more than a thousand people.

To organise a movement of the scope and depth of the George Floyd protests—especially since it is driven by a group of people that are outside Antifa’s core demographic—is far beyond Antifa’s capacity, or even of the larger anarchist movement.

Looting, even property destruction, are tactics which are not part of the standard Antifa toolbox.

Perhaps that’s why Trump added “anarchists”—for whom, at least, property destruction would be more in line with their agenda—to his blame game.

There are two more reasons that the president is focusing on Antifa. The first is that he is, as he has always done, playing to his base and ignoring everyone else.

The right-wing press long ago turned “Antifa” into a bogeyman, affixing the label as a catch-all for everyone from centrist Democrats to troglodyte Stalinists—with a handful of real anti-fascist activists thrown in for good measure.

Last year, Donald Trump tweeted that he wanted Antifa declared “a major Organization of Terror” — a stance which emerged from the far-right — so now he can press the button on this already-crafted-and-disseminated talking point.

The second thing is that Trump, and the other officials who are parroting him, are pointing fingers at Antifa to avoid enflaming the African American population even more and catalyzing them into joining an already out-of-control movement.

One would expect the president to follow his right-wing base and smear African Americans by trotting out well-worn racist tropes, for example accusing them of being animals who can’t control themselves.

But Donald Trump quite pointedly did not say this, a fact which has not received enough attention. In fact, the president—as well as many other governors, mayors, and police chiefs—have expressed sympathy for George Floyd and legal protests.

This shows their deep-seated fear of what would happen if a larger part of the African American population becomes mobilized and takes to the streets.

Right now, the protests are relatively small, topping out at the tens of thousands. (The pandemic is keeping numbers down; so has the absence of the larger national organisations from calling them, which don’t want their brands tarnished by illegal actions.)

And, while the protests are led by African Americans, and in some places joined by other people of colour, they have received strong support from white people.

One New Yorker who is taking part in the marches told me that they are averaging about 40 per cent white, which, in my own twenty years in the city, I’ve seen is a typical percentage for anti-police brutality marches.

Only a small percentage of the African American population is taking to the streets, even though the vast majority are undoubtedly in agreement about the need for change.

Right now the police in New York City cannot enforce an 8 PM curfew, and demonstrations with thousands of people are going on into the night, with looting occurring alongside them in Manhattan.

Mobilising the African American population at large would make an event that is already out of their hands into a revolutionary situation.

If the burning of a Minneapolis police station, which was the key movement in catalysing the militant demonstrations, could be repeated nationally, the police would not be able to contain it.

But the repression Trump is starting to unleash needs justification, and the mostly white anarchist and anti-fascist movements are readymades. The president has a Pavlovian base that is primed to salivate at the drop of certain words, including Antifa.

The idea that Antifa is a “terrorist” group has already been disseminated by him and many others on the right. In the United States, there is no such label for domestic groups—only international ones.

Furthermore, you cannot proscribe a domestic organization or an ideology in the United States, unlike many European countries.

But using this label will mean that the FBI and other law enforcement agencies will pay extra attention to certain groups and actions; and that they have been given the green light to demonise these activists by labelling them “terrorists”.

This will also encourage prosecutors and judges to add special sentencing enhancements to convictions (although people must be convicted of existing laws, such as assaulting a police officer or arson).

Last but not least, there is the propaganda value of claiming that terrorists are behind the protests.

During America’s Civil Rights Movement of the 1950s and 1960s, the invocation of the Communists secretly orchestrating African America-led organising was a simultaneously racist and Antisemitic exposition.

African Americans were seen as being too stupid to organise their own complex (and successful!) political movements, so the crafty Communists—or Jews, or both—were blamed.

The reality was that the existence of the white supremacist system came first, and the revolt against it second.

White supremacists, drunk on their ideology, could not believe that their actions were inspiring those they oppressed to rebel against them. It was so much more convenient to blame third parties.

The same thing is happening today. “Antifa terrorism” is just the latest name for the “Communist plot,” which before that was the “Jewish conspiracy.”

But what the American right is really afraid of is the growing, multi-racial rebellion against white supremacy.

The revolt is expanding out into small cities and towns, and even conservative areas that have never seen a protest before.

Donald Trump and his followers are not just desperately trying to stop this, but also refusing to admit the situation to themselves.