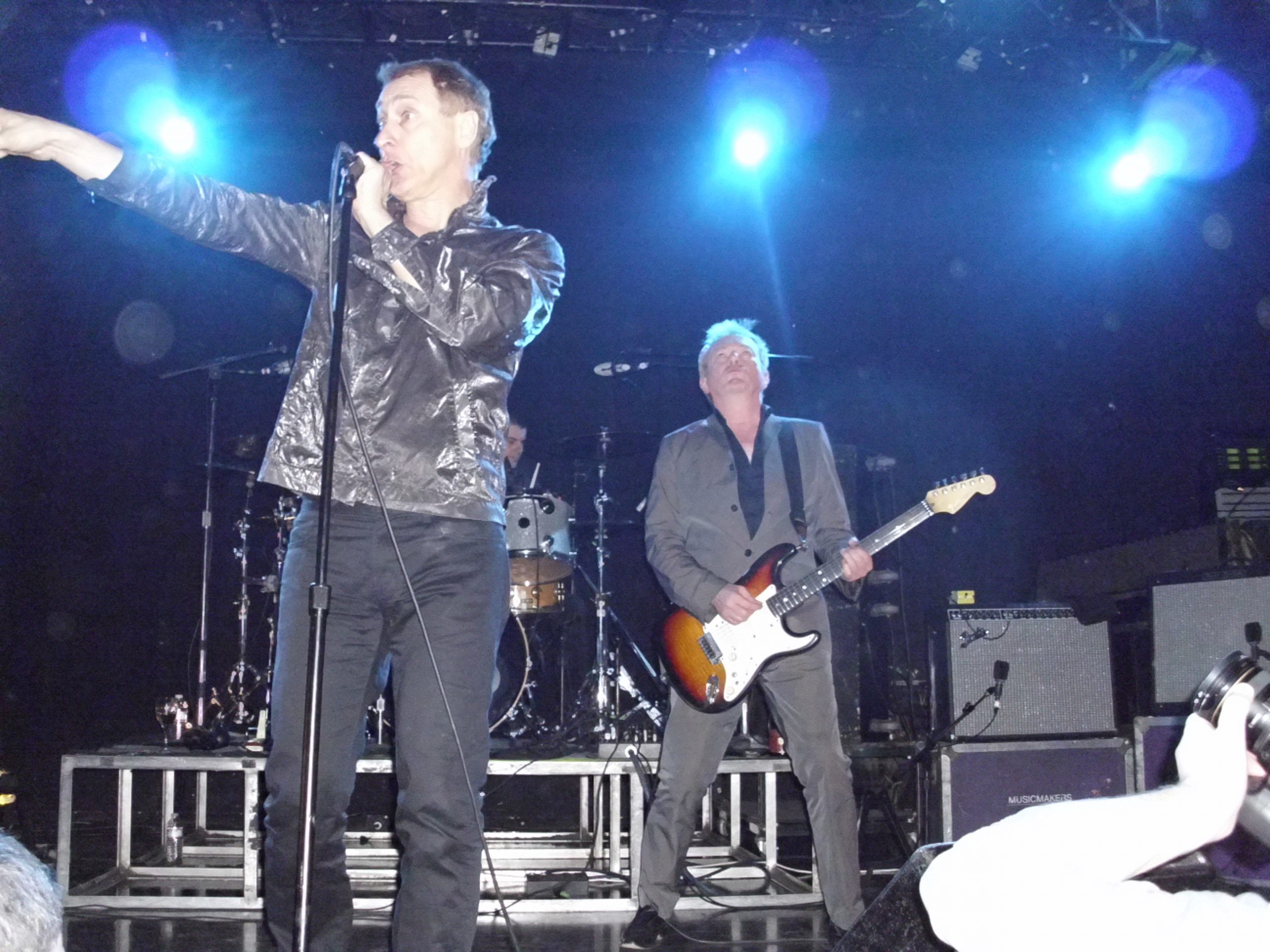 Their cultural revolution was punk. Gang of Four, 2011.

The Gang of Four Legacy

Has there ever been a more impressive debut album than Gang of Four’s Entertainment?

Seamlessly fusing the brash energy of punk with the tight rhythms of funk, songs like “Natural’s Not In It” and “At Home He’s a Tourist” would still be compelling musically if they trafficked in the banal topics typical of late ’70s pop radio.

As much as co-founders Andy Gill and Jon King loved the sound of chart-topping bands like Chic — Gill’s guitar playing owes a lot to Nile Rodgers — they could not have been more different lyrically. Entertainment vigorously repudiates the invitation to hedonism that rang out through the world’s nightclubs.

“At Home He’s a Tourist” is particularly blunt, noting that it’s “down on the disco floor” where profits are made. But every song on the album poses questions about the relationship between capitalism and culture.

So do Entertainment’s successors, Solid Gold and Songs of the Free.

Although these albums suffer by comparison, it’s not because the band sold out. Had another band released them, they would almost certainly have found more favour than they did as Gang of Four releases, because Entertainment had set such a ridiculously high standard.

Together with the superb drumming of Hugh Burnham and the equally excellent bass playing of Dave Allen on the first two albums and Sara Lee — who also added a new dimension to the band’s backing vocals — on the third, Gill and King had created a template for how to transcend the division between “white” and “black” popular music that had opened up during the 1970s and produce music that was simultaneously accessible and uncompromising

Reissued by Matador Records for the major music streaming services along with a spate of live recordings, they confirm that Gang of Four were the Velvet Underground or Big Star of their era, astonishingly influential despite being intermittently hard to find.

Revisit what might be called the Golden Age of Pitchfork — the years when George W. Bush was in the White House and the War on Terror was everywhere – and it rapidly becomes apparent how many bands borrowed elements of the Gang of Four formula: Interpol, Les Savy Fav, The Rapture, Bloc Party, Gang Gang Dance, !!!, the list goes on and on.

Fifteen years later, now that those bands have themselves become sources of inspiration for a new generation, it’s almost impossible to imagine life before songs like “Damaged Goods”.

Despite the increasingly canonical status of Gang of Four’s music, however, few have come close to matching the power of their lyrics.

From the moment that they decided to translate the insights they were learning in art classes at Leeds University into popular culture of their own devising, Gill and King had a remarkably sophisticated approach to their work.

Unlike most of their predecessors on the left, Gang of Four did not feel the need to reject the major-label world. In this regard, they followed in the footsteps of The Clash, who were more interested in reaching a diverse global audience than demonstrating their ideological purity.

However, whereas The Clash usually gave fans of traditional rock-and-roll what they were programmed to expect, Gang of Four asked them to open their minds to other possibilities.

In one sense, this distinction merely reflects the passage from punk to post-punk charted by Simon Reynolds in his brilliant book Rip It Up and Start Again. But the political investments shared by these two bands give it greater significance.

Even as Gill lay in his hospital bed, suffering from a mysterious illness he contracted after the band’s tour of China last fall, he was still working on the band’s latest project, Anti Hero.

This posthumous release features two new tracks, completed by vocalist John Sterry, who replaced King after his 2011 retirement from the band. But it also contains a cover of “Glass”, one of Entertainment’s more radio-friendly tracks.

While superficially very similar to the original version, it brings into sharp relief something that was easier to miss when Gang of Four’s music was still shockingly new.

The new recording begins with four repeating bars of guitar that fall a note short of resolution, as if posing a question. And then a matching bass line starts up in the next four bars, sounding thick and more forward in the mix than is typical for traditional rock-and-roll dynamics.

But the historical reference made in those first eight bars still lingers in the background, facilitating a kind of “double listening” in which the song’s actual lyrics are shadowed by the sardonic opening line of The Byrds’ 1967 single “So You Want To Be a Rock’N’Roll Star”.

By citing this earlier critique of consumer society, “Glass” implicitly undercuts the belief that punk represented a radical break with the excesses of classic rock. But whereas The Clash honoured the past with fidelity to a musical aesthetic, Gang of Four did so at a more conceptual level.

Even though “Glass” initially seems like one of the less political tracks on Entertainment, it does a better job than most of articulating the concerns that motivated Gill and King to make music in the first place.

Rather than reinforcing the easy binaries long favoured by the working class in the United Kingdom, it directs our attention to the first-person narrator’s myopia.

Instead of identifying with others in an act of imaginative solidarity, he identifies himself as a person, so preoccupied with the act of seeing that he seems incapable of making the distinction between friend and enemy, which the brilliant — and Nazism-tainted — political theorist Carl Schmit defined as the essence of politics.

At least, that is what proponents of a traditional approach to making political music would argue.

Aware of the band’s leftist reputation, they would probably regard “Glass” as a critique of the atomized existence to which postwar consumer society increasingly seemed to lead. And perhaps it is intended as such a criticism.

But closer scrutiny of the band’s work reveals that this conclusion is too simplistic.

As Gang of Four made clear in numerous interviews, they had no interest in being propagandists, no matter how noble the cause.

Their purpose, rather, was to help us navigate the thorny territory between the personal and the political, a skill that Gill and King surely honed in interactions with their Leeds professor Tim Clark, one of the British Situationists whose work had also inspired Malcolm McClaren’s management of the Sex Pistols.

Yes, the narrator of “Glass” has a hard time seeing anything more than the act of seeing. But his attention to what intercedes between the outside world and himself serves as an allegory for the self-awareness necessary to comprehend the workings of consumer society.

It is all well and good to demand that we distinguish friends from enemies. But unless we find a way of perceiving what we are trained not to see, the value of that distinction will be compromised by our ideological blind spots.

The newly released live recordings, primarily from the band’s first five years, frequently help us to notice details in the band’s music that we might otherwise fail to register. And “Glass” is exemplary in this regard.

The first time we encounter it is in the set Gang of Four played at the Nashville Room in London on 24 February 1979, when they had only performed a handful of shows and the sole record to their name was a three-song EP.

The song sounds tremendous, with the band providing a catchy “whoo-oo” counterpoint to King’s lead vocal that invokes the pop harmonies of bands like The Byrds. The lyrics are somewhat different, too, focusing more attention on the idea of pain-killing than the finished version does.

What really makes this early performance of “Glass” resonate, though, is what precedes it. Although titled “It’s Her Factory”, after the spoken-word track that would later appear on the yellow-covered 1980 EP that followed Entertainment, it doesn’t focus on the plight of women working in “a man’s world” as the official release does.

Instead, we hear an impromptu rant directed at members of the audience who had been spitting in the band’s direction in what by then had already become an ossified punk-rock tradition.

Despite the fact that Gang of Four was more than half a year away from releasing their first album and had little name recognition among the general public, they felt confident enough to direct harsh criticism at their antagonists: “They must know a lot about us. What have we done? Is it not hip to like us? Oh, that’s very ‘modern’.”

The rant then proceeds to excoriate someone the band had encountered in a Chinese restaurant who made nasty jokes about women, black people, and gays, then compares him to the spitters: “He thought he was funny. They think they’re funny.”

Then the rant ends the same way the future EP version would, with a Looney Tunes-esque “That’s all”, before segueing into an introduction to the next song, as angry voices ring out in the background: “This is called ‘Glass’, for all of you that haven’t got brains made of spit.’”

This isn’t the way up-and-coming bands try to build an audience.

But Gang of Four clearly had something more important in mind, even at this very early stage in their career. While they worked hard to achieve the sort of popularity that would get their ideas across to large numbers of people, they refused to compromise their principles to that end. They wanted an audience that was willing to pay as much attention to the medium – that “pane of glass”, only serving as a metaphor – as the message, whether listening at home or in a concert hall.

It is wonderful that we now have the opportunity to do that to an unprecedented extent, using the sort of technology that we are trained to treat as transparent.

Andy Gill would certainly appreciate the irony, even if he didn’t live to experience it firsthand.

Photograph courtesy of Robman94/Wikipedia. Published under a Creative Commons license.