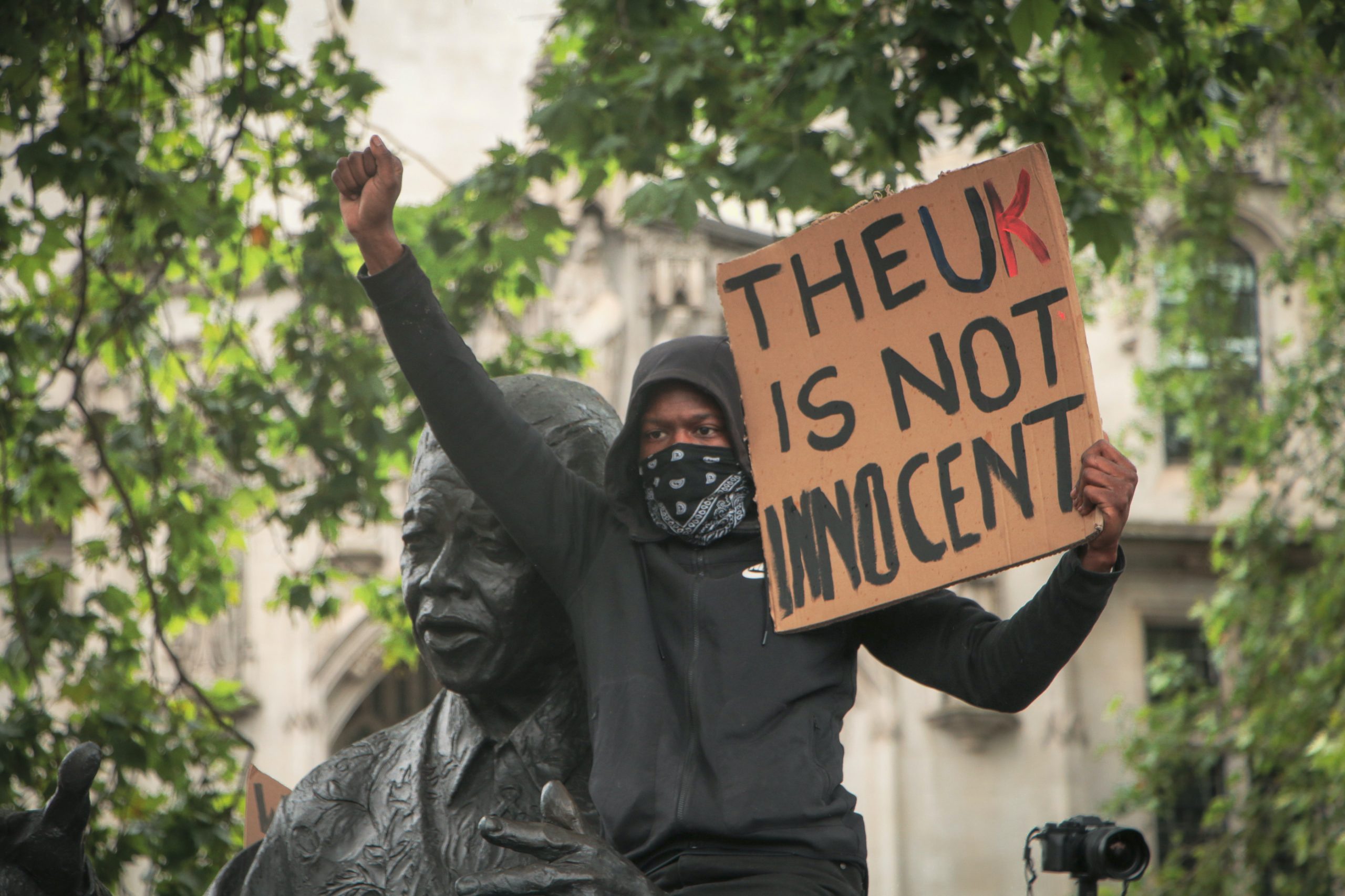 It’s hard to imagine a more incongruous setting to hear the music of Sault than the one I found myself in this week. As I drove the unfamiliar streets in and around Salt Lake City, international capital of the Mormon religion and one of the most stereotypically white places on the planet, they provided the soundtrack.

This British collective – so far, all but a few participants have chosen to remain anonymous — has released two lengthy albums since the death of George Floyd inspired protests worldwide, interspersing danceable grooves in a decidedly nostalgic vein with spoken-word collages that doggedly confront what the great British cultural theorist Stuart Hall called the “present conjuncture”.

June’s Untitled (Black Is) and September’s Untitled (Rise) are records that get better with each successive listen, revealing details that reinforce one’s first impression. Track after track fuses anguished examinations of racial injustice with celebrations of a proud blackness that perseveres in spite of everything. Individually, many are impressive; together, they add up to a staggering achievement.

But trying to make sense of Sault’s work as I traversed a landscape shaped by explicit white supremacy made my head spin. Had I been visiting my old neighbourhoods in the San Francisco Bay Area or the ones my family drove through during my teenage years living near Washington D.C., their music would have helped me to see my surroundings as a palimpsest of postwar African-American culture.

In Salt Lake City, however, it felt like I was witnessing its negative space, the result of a determined attempt to rewrite American history to make white people both its victims and heroes.

How would the lush, disco-style string arrangements on tracks like “Scary Times”, the secular gospel harmonies of “Miracles”, or the polished funk of “Son Shine” sound to someone whose entire world appeared to be centred on the exaltation of autonomous whiteness?

And what impact would the biting critique of self-proclaimed white “allies” on “You Know It Ain’t” have on people who have been conditioned to regard sell-out moderates as radical socialists?

When I stopped for coffee, I sat in my car for nearly an hour before finally turning off the ignition, listening to “Strong”, the incredible opening track off Untitled (Rise), which packs so much into its six-plus minutes that it feels like an album unto itself.

Starting with an echo-drenched bass groove that winds its way through a slightly sped-up, trans-humanised female chorus of inspirational messages about “moving forward”, it picks up new elements like a snowball rolling downhill: a trebly synth figure that sounds like falling stars; a guitar line worthy of Nile Rodgers at his tightest; and then a thundering herd of bongos, which take centre stage before the female voices return, now sounding decidedly more African.

With the exception of rap, you could practically infer the entire history of black music since the 1960s from “Strong”. It’s an overwhelming tour-de-force. But there is no fall-off in quality once it draws to a close. Sault makes music that is so relentlessly brilliant, so full of beauty and sadness, that it brought me to tears in a Starbucks parking lot.

Needing a break, I switched off my Sault playlist on Spotify and turned on the satellite radio in my rental car. It was tuned to the station that plays hits of the 1970s. An ad was playing. I decided to change the channel.

But before my fingers reached the dial, a new song came on, stopping me in my tracks: “It’s a Thin Line, Between Love and Hate.” The eponymous 1971 song by The Persuaders is one of my favourites. Until this moment, though, I had never thought of it as more than a tale of romance gone wrong.

With the Sault albums still fresh in my mind, I suddenly heard it as a covert allegory. The abusive relationship detailed in the lyrics, in which a long-suffering woman finally exacts her revenge on the man who had been taking her for granted, could double as a commentary on the state of mind in the African American community as it emerged from the 1960s.

In retrospect, I probably got a little carried away. Sault’s work is so deeply layered that it threatens to make most other music seem shallow. I wanted to redeem this favourite song of mine by making it mean more than it did.

Even so, the opening line still works as a self-contained allegory about the reception of black culture in the United States and, more recently, Europe. When it comes to popular music in particular, it is a thin line between love and hate.

It seems impossible to me that anyone would have the gall to diminish the role that musical traditions derived from Africa have played, from the cakewalks and ragtime piano rolls of the late nineteenth century, to jazz and the blues, to rock and roll and all its hybrid offspring.

Yet time after time, white people have argued that they “perfected” musical idioms that black people developed, providing ambition and discipline that would otherwise have gone missing.

This is why George and Ira Gershwin’s attempt at opera in Porgy and Bess found an audience while Scott Joplin’s did not; why Duke Ellington had to innovate five times as hard as the white leaders of big bands did to be regarded as equivalent to them; why Elvis Presley, the Rolling Stones, and Led Zeppelin attained a level of commercial success that the blues musicians they covered never could; and why Post Malone is much better known by the general public than musicians of colour who have also tried to develop what might be called “post-rap”.

It’s a story many of those white performers were willing to tell. Yet one that the industry has managed to marginalize, if not totally suppress. No matter how much reverence has been directed towards black artists over the years, the same pernicious stereotypes continue to thrive.

Indeed, popular music has provided the ideal laboratory conditions for sustaining toxic misperceptions about black culture, ensuring that the political and corporate worlds have remained biased against people of colour.

Perhaps most impressive thing about Sault’s two post-BLM albums is that they help listeners to perceive this fundamental fact, without ever becoming so didactic that they lose their connection with the dancefloor. It is the musicality of their work, its range and intensity, that sets it apart from other artists working in a similar vein.

This would be true even if Sault were as overexposed as Kanye West. But the fact that most participants in this loosely defined collective remain anonymous gives their work even more caché.

Sault arrived on the scene last year out of nowhere, demonstrating a comprehensive knowledge of black musical traditions and a remarkable gift for transmuting it into music that somehow manages to sound both ageless and brand-new.

The thin line between loving African-American culture and hating black people is still with us today, despite the best efforts of the Civil Rights Movement and all those who have been inspired to extend its legacy.

Indeed, it often appears to be the case that hate follows directly from love, with whites who resent their cultural dependency using it as an excuse to keep blacks down.

No matter how much reverence white artists direct towards the black artists who influenced them, they still benefit from the privileges that their race affords them.

This does not mean that they are insincere. Nor does it mean that their work is necessarily inferior. In fact, the latter conclusion often takes the form of a perverse mirror image of white supremacy, in which the prospect of transcending structural inequality is discarded in favour of a cynical insistence that race will always condition our response to art.

These are the thoughts that coursed through my head as I continued to drive around Salt Lake City, listening to the nostalgia promulgated by satellite radio instead of returning to Sault. Because, as much as I love their latest two albums, I could not discern a way to love them without hating myself.

Only after I had regained my composure did it become clear to me that there might not be a better place to listen to their music than in a setting where the contributions of black culture to American society had been “disappeared” as effectively as the native population of the Great Basin.

As I continued to explore the part of the Salt Lake City metropolitan area where my daughter had been staying with a friend, I kept seeing the unmistakable tattooed visage of Post Malone gazing at me.

Since moving to the area two years ago, the wildly successful musician has become a kind of local hero, popular for his repudiation of Hollywood excess, his love of firearms, and for being willing to “represent” Utah to the outside world.

To his credit, Post Malone came out strongly in favour of Black Lives Matter. He seems willing to use some of his white privileges to draw attention to the problem of white privilege.

Whatever you think of his music or his appearance, Post Malone is not the problem that we should be worried about most, just as Elvis, Mick Jagger, and Eminem were not.

But I could not help but think, as I reflected on the value of Sault’s remarkable achievement, that his move to Utah ironically mimics the post-war “white flight” that left cities and their inner suburbs desolate.

While he may love the Salt Lake City area for its natural beauty and liberal gun laws, he is able to feel at home there because all the tattoos in the world would never be enough to cover his whiteness.

It also occurred to me that Sault’s work is unusually well-positioned to draw attention to such ironies.

As mostly British artists refracting a political movement that started in the United States through an Old World lens, Sault is keenly aware of the complex relationship between cultural appropriation and geographic displacement.

When British Invasion rock musicians of the 1960s were repurposing blues classics – usually, it must be noted, with tremendous respect for the African Americans who had created them – they were also managing to largely ignore the burgeoning influence of Anglo-African culture in the United Kingdom.

These musicians were open to blackness in a way that many white Americans were not, but struggled to recognise its presence close to home. The same would hold true of their counterparts on the continent.

Only when the black population reached a critical mass in cities like London, Paris, and Berlin did the foundational racial dynamics of the United States begin to intrude consequentially on European life.

Among the many virtues of Untitled (Black Is) and Untitled (Rise) is their refusal to draw a distinction between the black experience across the Atlantic and the one that Sault have encountered in the UK.

The speed with which Black Lives Matter became an international protest movement in the weeks following George Floyd’s death testifies to a desire for solidarity that transcends national borders. But it just as surely demonstrates that American racism remains one of the United States’ most successful exports.

How apt, then, that Sault’s music is now positioned to return the favour, contributing to a new British Invasion with the potential to help Americans see from afar what they have been conditioned to overlook nearby.