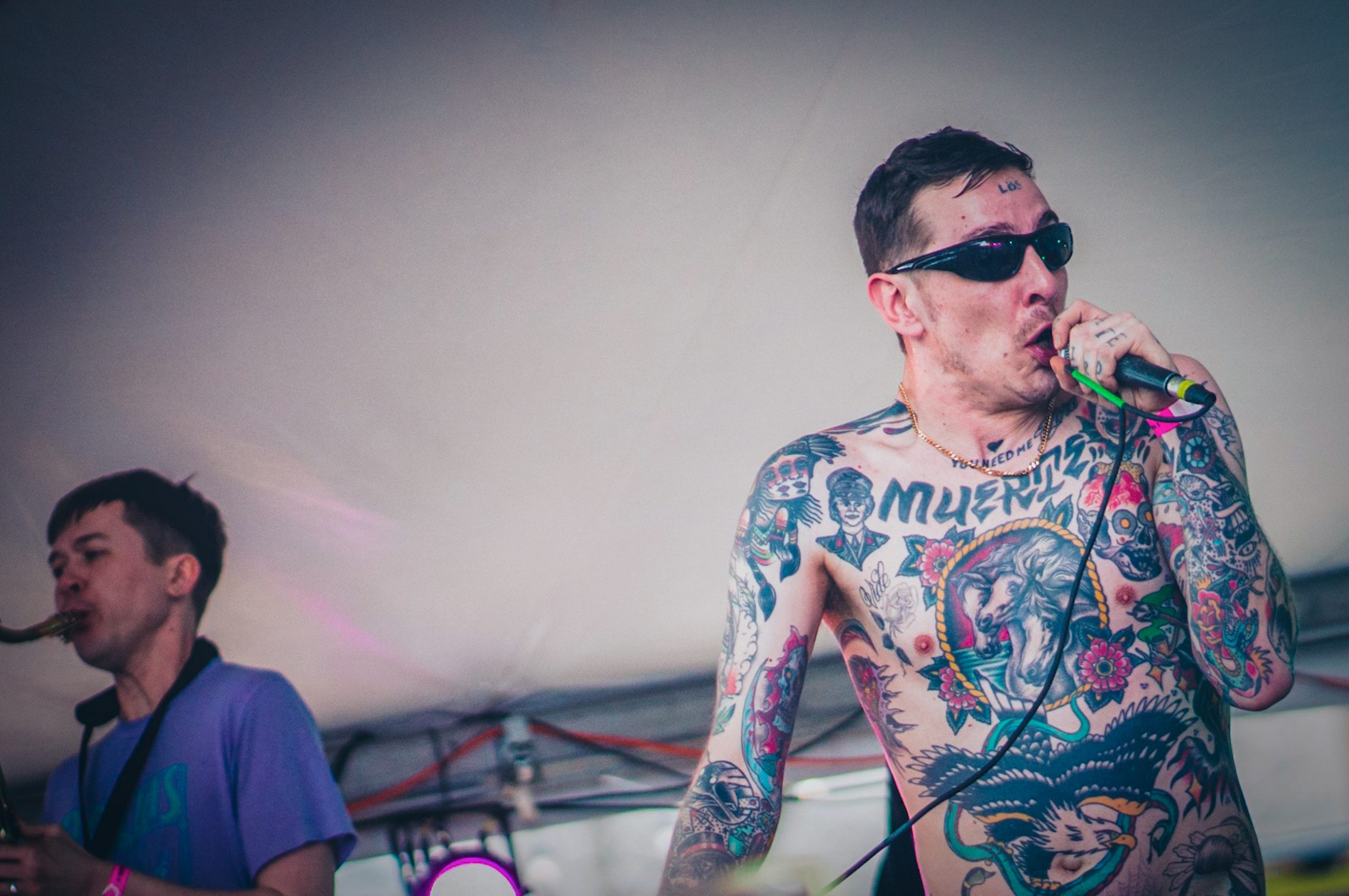 Men in the Era of Trump

The Viagra Boys are never easy listening. But I found them particularly hard in the weeks leading up to Election Day in the United States.

I don’t mean their sound. While some people might find it abrasive, anyone who has thrilled to the deep, muddy grooves of bands like The Jesus Lizard, Girls Against Boys, and Killdozer — not to mention Nirvana — the way I have will find plenty to love. No, it’s their lyrics I have in mind.

While there have been countless bands from the British Isles that have tried to sound American and a great many more from the continent where English is a second or third language, few have managed a more convincing impression than this Swedish band.

As I listened obsessively to the Viagra Boys’ small, yet memorable catalogue, I found myself asking whether lead singer Sebastian Murphy – the product of an American father and Swedish mother – was singing about the sort of people likely to vote for Donald Trump.

Reviews of the band tend to describe their lyrics as satirical, sending up the exaggerated caricature of masculinity that Hollywood action films have inflicted upon the world.

Although this is not an inaccurate assessment, it fails to register how much songs like “Best in Show”, “Shrimp Shack”, and “Lick the Bag” feel like immanent critique. To wit, Murphy inhabits a first-person singular persona in his songs to a terrifying degree.

Whether describing what it’s like to be on – or coming down off – drugs, the sort of everyday sexism men demonstrate in their relationships, or musing on more abstract topics, such as the decomposition of human flesh, he manages to convince you of his sincerity. He means it, man.

Like Johnny Rotten of the Sex Pistols and other punk forebears famous for crossing the line into bad taste, though, Murphy also communicates a distance from the words that come out of his mouth.

Somehow we understand that we are supposed to perceive his personas according to the logic of the split personality.

Never is this more clear than on what may be the band’s best-known song, “Sports”. Murphy reduces the list poem that Beats like Allen Ginsberg popularised to a minimum:

The song’s title functions as a one-word chorus, repeated after each one of the song’s three “stanzas” and then, with increasingly strident vocals, as an outro.

Presumably, all these activities are related to sports in some way and, with the exception of the rugby ball mentioned in one line, distinctly American ones.

Knowing that the Viagra Boys are from Stockholm and that Murphy, though born in the United States, identifies as Swedish, it makes sense to conclude that the song is mocking the ways in which American “sports” transcend physical culture.

In the Pitchfork review of the band’s 2018 debut album Street Worms, Nina Corcoran argues that “the band’s greatest trick is mimicking the very people they despise”.

For Corcoran, the song “funnels the vapidity of U.S. masculinity through reverb and distortion. On paper, Murphy’s words read like a liberal arts student mocking the game his parents dragged him to: ‘BASEBALL! BASKETBALL! WIENER DOGS!’”

Maybe Murphy’s lyrics truly are just a “game of tongue-in-cheek word association”. The more I listen to the song, though, the less certain I am that he is only taking a piss. Perhaps that’s because I am too much the target of the critique to join in his mockery.

But I suspect that the reason has more to do with the precision of his diction. While the sports Sebastian Murphy mentions, from baseball to “buying things off the Internet”, may appear intrinsically absurd, the vision of reckless abandon he conjures – “Getting high in the morning/Not answering calls” – is also appealing.

It translates to a stoner worldview that refuses to take anything that seriously, that is itself taking a piss at the earnestness of strivers who are always trying to get ahead. If it is stupid to treat shopping as a sport, it is even stupider to treat earning money as one.

I confess to finding this kind of adamant insouciance attractive. That’s why I kept hearing myself in the band’s songs.

As Election Day approached I had to ask whether somewhere, underneath all my learning, I profiled as what the pollsters call a “likely Trump voter”.

I had been bombarded for months with messaging from the president’s reelection campaign, which had somehow concluded that, despite being a registered Democrat, I was the sort of swing-state resident who might be inclined to switch in the privacy of the voting booth.

It didn’t help that the band’s latest release, the single “Ain’t Nice”, eerily reproduces the experience of my university years, when I thought about my relationships in terms of my various collections:

I began to freak out. Were lyrics like these a way of telling me that the parts of myself I have learned to conceal hold the key to unlocking my political unconscious?

Although I wasn’t about to vote for Donald Trump, could this self-recognition be an early warning sign of a future conversion?

No longer caught up in the Viagra Boys’ evocative character studies, which stick to the psyche like spider webs, I am certain that the answer is a resounding “No.”

When I look back on my life from the perspective they afford me, however, I can see how, if I had made different decisions in my teens and twenties, I could have ended up like my cousin, a person of colour who is tongue-in-cheek about politics, yet always votes to protect his right to bear arms.

Or, had I been born in Sweden, I could have ended up as the sort of person who goes through the motions of supporting the country’s longstanding devotion to socially progressive policies in public, while secretly resenting the degree to which they seem to sideline white men like myself.

Like almost every country in Europe, Sweden has seen massive growth in its far right. While the neo-Nazi Sweden Democrats — Ace of Base’s Ulf Ekberg was a member in his youth — now work to undermine the nation’s institutions from within government, more extreme movements rally support for its project in underground circles.

“Free-thinking” middle-aged men like me, the ones whose intelligence cannot be expressed fully in the workplace or home, are some of their most prized recruits.

For the most part, the rise of far-right populism corresponds with a return to strident nationalism. Whether in Sweden, France, Japan, or the United States, far-right parties repudiate the post-World War II effort to create supernational bodies like the United Nations and their regional correlates, such as the European Union.

Donald Trump’s famous promise to “make American great again” aligns with similar pledges around the world, always with the purpose of doing so at the expense of an internationalism perceived in paranoid terms.

At the same time, the cultural influence of the United States remains disproportionately large globally. It’s impossible to imagine a song like “Sports” being written about a different nation’s pastimes. Even as the subject of ridicule, Americanness retains its imperial allure.

In a way, then, the Viagra Boys’ seeming fixation on “Murrica” can be interpreted as a roundabout way of addressing the subterranean chasms of European identity as well.

While I imagine that fewer men in Sweden or Germany or Spain would feel called out by their lyrics the way I do, they probably should.

By helping us see different permutations of toxic masculinity – many of Murphy’s lyrics describe reckless drug use – through a red-white-and-blue lens, the Viagra Boys slyly conjure the spectre of a different sort of internationalism, the kind which men like Steve Bannon have been assiduously working towards over the past decade.

And, to the extent that they also make it possible for someone like me to see himself in the funhouse mirror of far-right politics, the band invites the sort of thorough self-examination that these precarious times require.