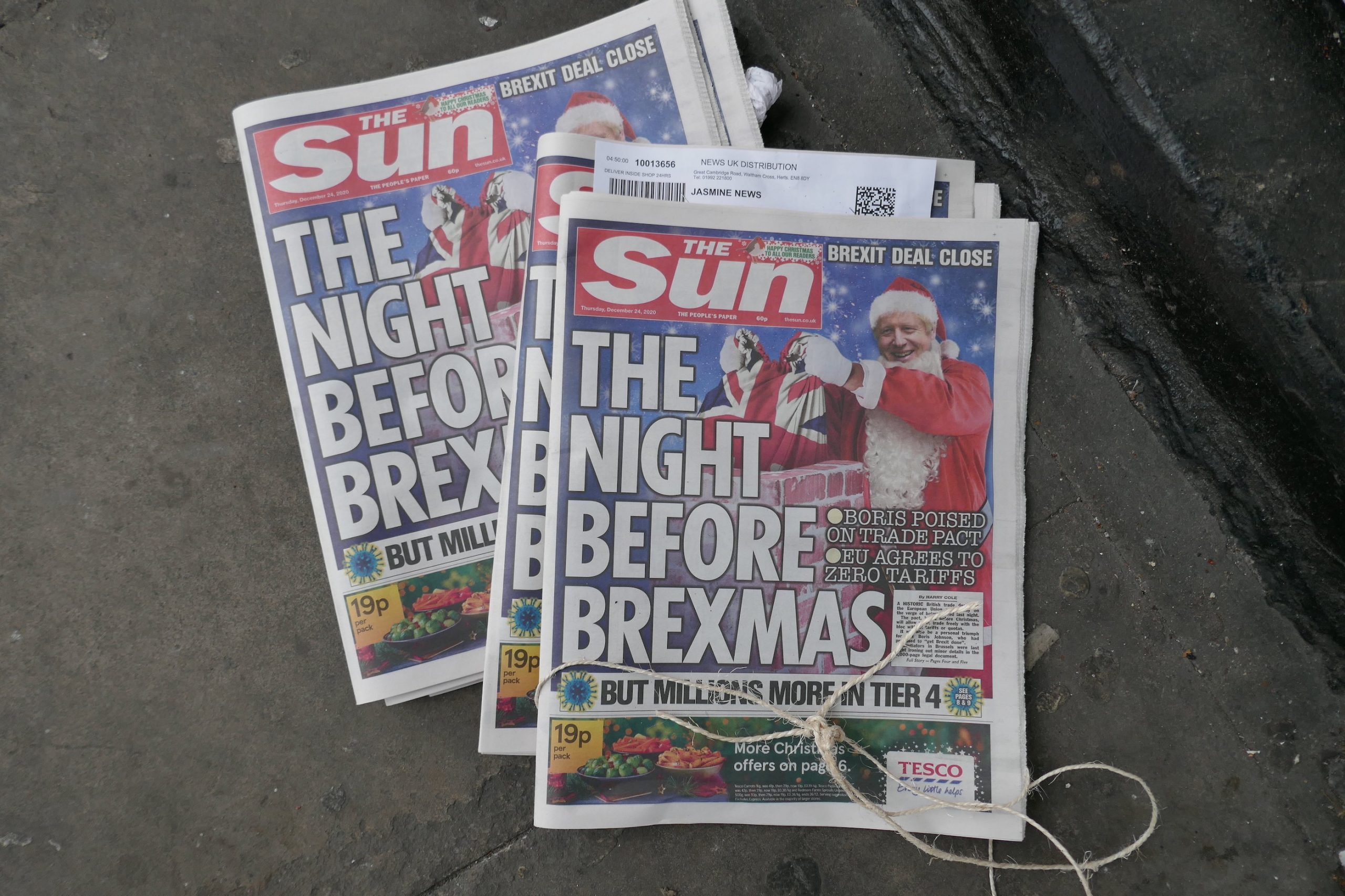 Taking on the Tabloids

Britain’s tabloids have always been infamous for their gutter-level coverage of life. They were always the lowest of the low.

Somehow, though, the Murdoch press managed to take everything down a notch further, as though the genre were destined to hit rock bottom.

Yet, like any media, there is no law of nature that says tabloids have to be right-wing. It is indeed possible to reverse the bad journalism and bad politics.

The history of UK tabloid culture is testimony to that.

One such case was News on Sunday, set up in 1987 to challenge the dominance of the right-wing media.

News on Sunday was an ambitious attempt to launch a tabloid that would make an accessible case for socialist policies and internationalism. It was the brainchild of several ex-members of Big Flame, a libertarian Marxist group.

“The idea came from Ben Lowe, and was first set out in the Big Flame discussion bulletin in 1978,” reflected Henry Stewart, one of the founders of News on Sunday, on a blog remembering Big Flame.

“His idea was to go beyond the ambitions of newspapers like Socialist Worker and the Morning Star and establish a paper that was a popular tabloid – selling in the newsagent alongside the mainstream press,” Stewart explained.

“His belief was that, if we could establish sales of 100,000, it could be commercially viable,” he said.

The fate of the paper was set in just six weeks, and yet News on Sunday would be published for another six months.

A combination of folly and feuding had broken the fledgeling newspaper before it could even get going.

The frustration was deeply felt across the UK left.

Everyone from the journalists writing the news to the unions who funded the paper wanted it to succeed.

Several of the key people behind the project were linked to Big Flame, but not everyone involved. It’s important to understand where the Big Flamers came from.

Set up in Liverpool in 1970, Big Flame tried to bridge traditional gaps on the revolutionary left.

Unlike other left sects, Big Flame did not claim it was the revolutionary party to seize power, though the group recognised the need for such an organisation. This allowed Big Flame to reach out to different left camps.

Despite its best efforts, Big Flame began to lose members to Militant in the early 1980s. Eventually, the group was dissolved in 1984. Former members like Alan Hayling began looking for a different way to assert influence.

Hayling was a Cambridge graduate who joined Big Flame and went to work in one of Ford’s car factories to help organise workers. He stayed on the assembly line for eight years and developed the network that would become the basis of the newspaper.

However, Hayling knew that the project needed more experience. So he reached out to the most famous radical journalist of the time, John Pilger. He hoped that Pilger would help him professionalise the project and give it more credibility.

Hayling and the others put together a dummy edition of News on Sunday in 1985. No doubt the name was chosen to give it a mainstream feel. It was supposed to be a red-top tabloid, an invasion into the mainstream.

The team carried out market research and the results suggested that the newspaper could reach one million readers a week. Hayling suited up and took his case to the City in a bid to raise money.

Of course, the financial community was not interested, but the paper would soon find its natural supporters.

Hayling managed to raise £6.5 million to finance the newspaper. This was approximately the same as raising £13 million or £17 million today.

Where did the support come from? Trade unions like the Transport and General Workers Union and local authority pension funds put up most of the money.

Who owned the paper? A workers collective owned the controlling stake and they got the final say on appointing (and removing) the editor. It had private investors too.

Millionaire property tycoon Owen Oyston put up the most money of any private investor. He had made a fortune in the property markets of Northern England and wanted to diversify. His delusions of grandeur would help keep the operation going.

The feat of raising £6.5 million and getting a newspaper out to 500,000 people is still a landmark achievement today.

Somehow, though, the funding and distribution proved insufficient in the face of the many problems News on Sunday would run up against.

The people behind News on Sunday aimed to set up a big tent, bringing together a variety of progressive journalists.

What would make it different would be that the paper would not reflect any one organisation and instead focus on a mass audience.

So the group around Hayling brought in Mike Power, a member of the Communist Party of Great Britain. He had experience as a trade unionist in the print works.

Another key figure was journalist Keith Sutton, who decided to get politically active after a decade of working on Fleet Street. He would become the editor of News on Sunday.

Sutton made his name as an editor when he ran The Wapping Post, the campaigning newspaper of the Wapping picket lines in 1986.

It was a protest newspaper that satirised page three by running photographs of women riot cops wielding batons against protesters.

Nevertheless, the problems would soon set in. Many of the dominant figures were inexperienced and made a series of bad decisions, while they were divided over the right political line to take.

“I believe we created an environment in which it was impossible to succeed,” reflected Henry Stewart in his blog on the story of News on Sunday.

The coverage was so fought over that the stories produced ended up failing to satisfy the target readership. Not even the people behind the paper were happy with the results, nor were the financial backers.

“It was full of endless meetings, back-biting, lack of clear responsibility and a sense of blame if you got things wrong,” Stewart explained.

“You had to watch what you said and who you said it to. It was, with hindsight, what you would expect if you put a group of ‘80s lefties in charge of running an organisation,” he stressed. “And I include myself in that.”

Cracks began to show even before the first issue went to press.

John Pilger was editor-in-chief and gave Keith Sutton a list of experienced journalists to bring into the fold. He then went to Australia for three months to film a documentary.

In his absence, Sutton decided to hire his own people. He brought in people from outside Fleet Street through an ad in The Guardian that simply read: ‘We need journalists!’ It was an unprecedented move given that the British press ran on (and still runs on) on cronyism.

Pilger would return to find that the paper had been stuffed with people he didn’t know. He came to believe Sutton had done so to cut him out.

It was, indeed, true. Sutton had recruited the editorial team in such a way as to build up his support in the organisation and outflank the veteran journalist.

Sutton denied this, but the damage was done. It was only a matter of time before the cracks would run through the organisation. These rifts would help doom the paper.

Like what Big Flame attempted with News on Sunday? But everyday?

The situation was so dire that Sutton drafted one dummy edition, and Pilger drafted another.

Hayling and Pilger took their versions of the first issue to the workers collective that owned the paper.

Pilger demanded that Sutton be sacked and replaced. The collective saw Pilger’s dummy as the superior product, but they ultimately decided against firing Sutton.

Instead, they sought out a compromise where they ordered Sutton to change his dummy to match Pilger’s vision.

The result was Pilger quit and began “lobbing grenades” (to quote Mike Power) at the organisation. He went to New Statesman and penned a series of scathing articles damning the paper as “left-wing version” of The Sun.

By the time News on Sunday launched, the first issue was a result of compromise and indecision. The people who bought it, including its supporters, were disappointed. They felt the coverage was dull and politically incoherent.

In retrospect, we can see that the newspaper was unlikely to succeed in the conditions of the time. The 1980s were a decade of defeat and failure for the international left.

The Thatcher government was triumphant and right-wing newspapers seemed invincible.

Not only had the Conservatives won the Falklands War and beat the miners. Rupert Murdoch had fired 5,000 print workers and broke the back of the Fleet Street unions.

The Reagan Administration had kickstarted a supply-side economic boom that coincided with China opening up and turning itself into the workshop of the world. Everywhere the left was in retreat.

Perhaps the project could have succeeded in the 1960s or 1970s. The idea of a left-wing tabloid with internationalist values would still have faced an uphill struggle, but the state of British journalism was very different then.

Fortunately, the world has changed since and it may be that independent media has a better chance of succeeding today than it did in the past.

The plethora of progressive voices on social media platforms, and the continued appeal of left publications in the Anglosphere, confirm the audience is there.

From the revived Tribune, Novara Media and the Byline Times in the UK, to Left Voice, Jacobin and the boomer-oriented Truthout in the US, progressive publishing is flourishing.

The trick is to find a way to bring it to broad audiences, who otherwise depend on their Facebook feeds for news, but are increasingly disenchanted with The Guardian.

The only solution is a News on Sunday-equivalent, that can effectively bridge the gaps between the readerships of publications like these, on an international scale.