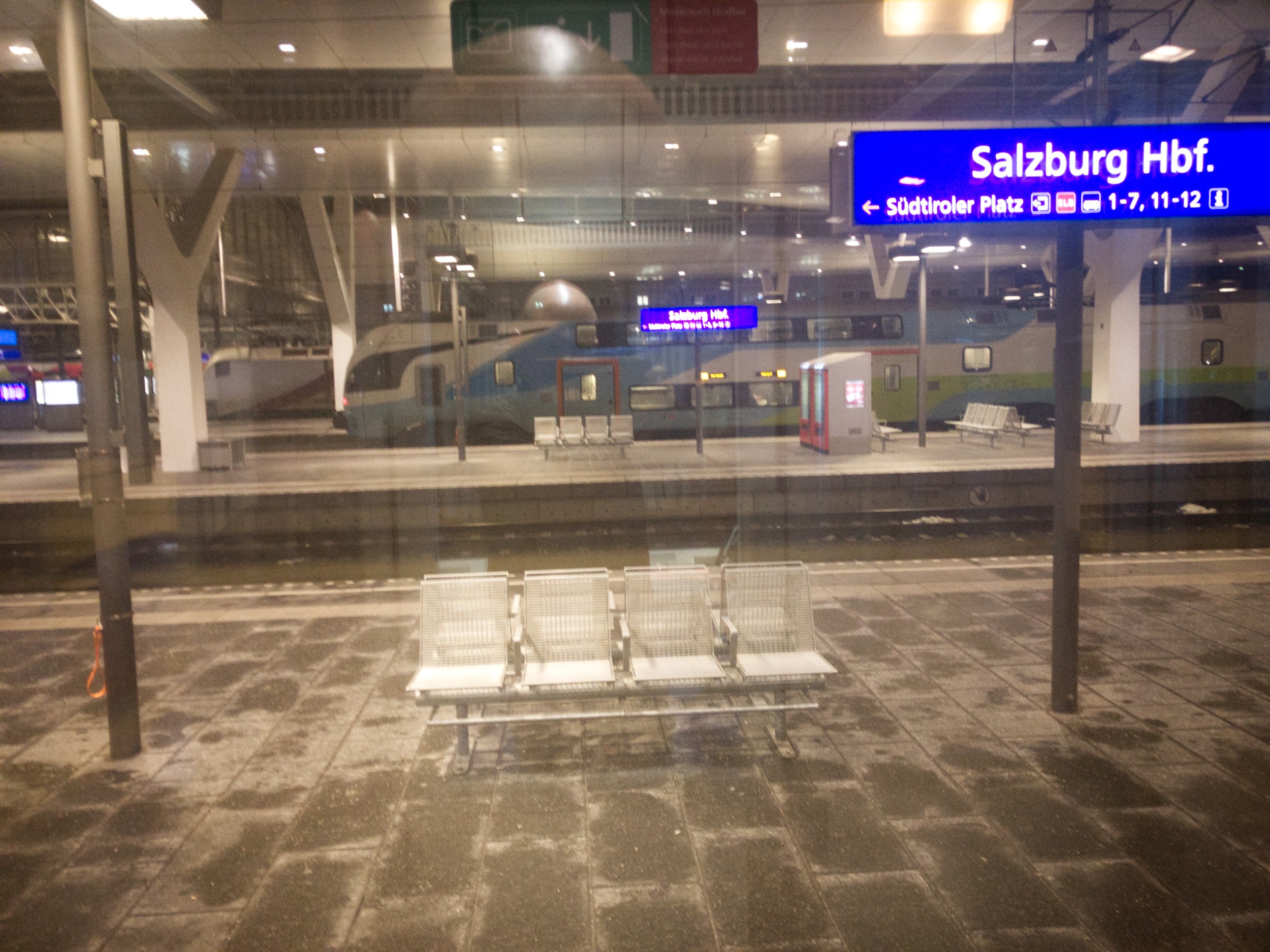 But this wasn’t Africa. Or, an inner-city area like Brixton, the Afro-Caribbean London neighbourhood this journalist once called home. Not even close. It was Milano.

Milano Centrale, to be precise, the epic Italian train station where migrants are generally to be found in front, hustling tchotchkes to commuters. Not boarding pricey Austrian sleeper trains to Munich.

“Could you help me figure out where my seat is?” asked a tall young man in a bright yellow ski jacket with a big internal frame pack on his back.

Pointing to an electronic ticket on his smartphone, I could see the brand of a carrier from abroad but couldn’t make out where it was from. I started to wonder.

The last time I’d been shown a mobile like this, I’d been asked to look at a map by an Arab man, about the same age, nearly four years prior, at Schönefeld Airport, in Berlin.

It was the summer of 2015 and the refugee crisis was in full swing. I’d just returned from working in Brussels and wherever you turned, there were refugees — Palestinians and Kurds, primarily, from Syria.

The map was embedded in an Arabic language document. The man had been given instructions by email where to go, once he arrived in the German capital, he explained.

Unlike the stereotypes of Arabs trudging across the Balkans, on foot, many refugees also took regular transport, when they could, once they got inside the European Union.

I was reminded of that moment, standing on the Schönefeld U-Bahn platform, waiting for the train to Neukölln. This man’s ticket was in Italian though, and I translated it for him.

“Your seat is 65F,” I remember telling him. “Better go park yourself there, and keep your ticket and ID readily available, because they’ll ask you for it,” I said, concerned he was illegal and could draw attention to himself.

The young man smiled and left my cabin, without saying anything. I didn’t see him again for another four hours, when I spotted him being escorted by away from the train, in Tarvisio, at 2 AM.

A stone’s throw from the Austrian border, security forces had raided the train, carting away at least 3 men, from what I could see in the half-light, from my cabin window.

We sat there for over an hour, as they walked up and down the length of the train, inside and out, looking for refugees.

Pulling out my ID to show the police, all they did was look me in the eyes and move on, as though seeing that I’m white, albeit European looking, was enough for them not to hassle me.

“Please take your bags and leave the train,” I could hear one of them saying to someone in the cabin behind me, in English.

I drew my curtains to the hallway. A compulsive photographer, who normally would have shot whatever passed by, I decided to sit this one out.

We’d been travelling for six hours already and I didn’t have the strength to be discrete.

But, there was no way of avoiding acknowledging the tragedy unfolding around me. The commotion was overwhelming, as though the entire train was being turned upside down.

Staring out the window, I could make out the silhouettes of detainees being gathered, their dark skin practically camouflaged in the near darkness.

The only figures to appear in any detail were the white security personnel who picked them up: a soldier in camouflage fatigues standing close to my car, and a blue-uniformed cop, 50 feet away. 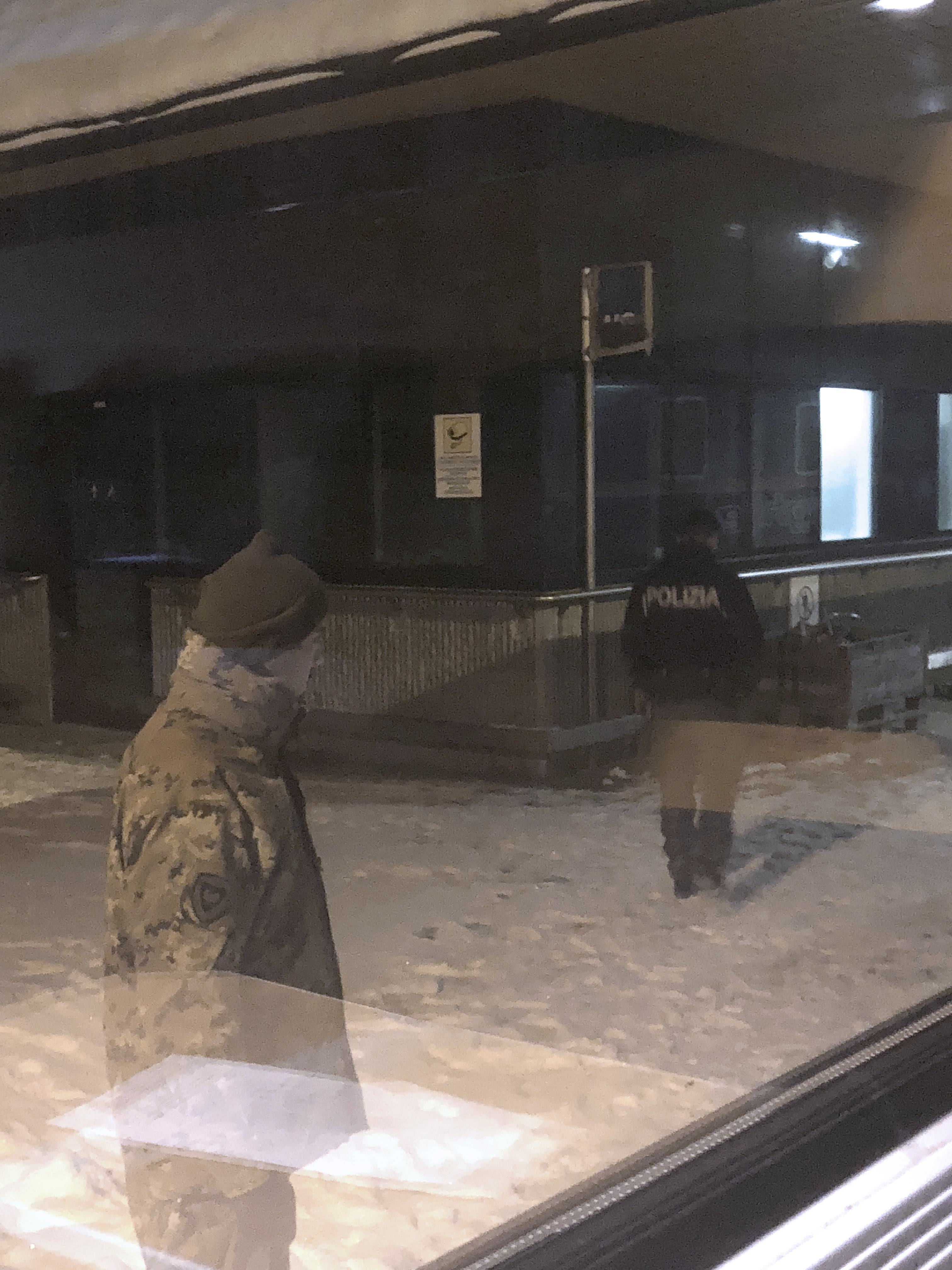 Eventually, the train began moving again, feeling somewhat, even if an illusion, lighter. I imagined myself travelling alone. My Welsh Terrier stood up and faced the door, as though braced for intruders.

Tail down, panting softly, Disco was clearly reflecting the stress of everything that was going on around us. I put my hand on her neck and stroked her, but she was too freaked out to relax.

So much had just happened, in such a short space of time. Under cover of the night, there was only so much that could be seen. But the police state-like vibe was unmistakable.

The train had obviously been raided, and migrants had been spirited away, in a well-rehearsed nighttime ritual of disappearance.

I imagined that the Italians were cleaning house before the train crossed the border into Austria, anxious about not pissing off the country’s right-wing government by allowing refugees entry.

I wondered what it was about these migrants that spelt arrest. The ten or so I’d run into, on the platform in Milan looked middle class. They could very well have been tourists.

Perhaps the Italian government had bought them their tickets and sent them on, as it had done before, attempting to force an equitable distribution of refugees amongst EU member states.

Or, perhaps, security forces were simply picking up anyone who was dark-skinned, knowing all too well that even if these Africans were not refugees, they’d be treated as such and heighten tensions between Austria and Italy.

The racism of what was transpiring was obvious, even if there was no legal pretext to refuse their right to freedom of movement as visitors to the EU.

I’d never know. The best I could hope for was that the Africans were simply detained, and allowed to travel later, once their identity and status had been ascertained.

Still, the ethnic profiling of these men was transparent. They were singled out for being black, in ways that recalled the worst instances of racism in the United States.

As an Israeli-American, my antennae had already been sharpened, watching cops pick up black kids in the Brooklyn of my teen years, and their Arab equivalents in Tel Aviv and Jerusalem.

Europe was where this all started, I had to remind myself. It was only by dint of my upbringing that I’d been prepared to understand things in such a political way.

As influential in defining racism as America and Israel can be, their examples often discourage expectations of the same sorts of behaviour in other parts of the West. It’s easier to let the savages take the rap.

Europe’s role in setting these standards for younger states, like the ones of which I’m a citizen, are frequently forgotten by expats like me, who are surprised when we get treated like outsiders.

Nothing drove that home more than the shock wakeup I was subject to the next morning, upon the train’s arrival a little after 6, in Salzburg.

Having finally fallen asleep at dawn, I’d been rudely awakened by a combat-kitted out Austrian cop. Disco had suddenly started barking and was preparing to attack him.

“My dog,” I yelled, as the policeman started to move to the side, to try and avoid getting mauled. Disco would have bitten him. God knows what he would have done to her in response.

“I’m police,” he yelled back at me, in perfect English.

Thankfully, Disco’s leash was still on the floor. I slammed my foot down on it as hard as I could and reached down to grab it. I could sense the cop’s body jerking, as though in response.

Once I had restrained Disco, the cop asked for my papers. I duly handed them over.

“You are from Israel,” I see, he said, scanning the cover. “Yes, but I live in Berlin,” I replied.

“Where in Berlin?” he responded, sounding suspicious.

“Where in Neukölln?” the cop asked.

“Herrnhuter Weg, just off of Karl-Marx-Straße,” I explained.

“I know Berlin,” he responded. “I know where that is,” as though I might not.

I wasn’t going to challenge him. My visa was there to see and I’d done nothing wrong. The policeman gave me a sharp look and moved on.

There was no way I was going to be able to get back to sleep after that. Besides, the cops were continuing to go through the cabins and question passengers.

Pulling Disco close again, to calm her down, I could overhear the same officer saying to someone else, in English, “You’re under arrest.”

I finally pulled my iPhone out, thinking I might get a picture as they passed by. No such luck. The platform was tellingly empty.

When I realised there’d be no photo opportunity, I switched to reading my messages. The top of the list was a series of WhatsApp messages from my publisher.

She wanted to know if I could put together a photo essay, of racism-related photographs of mine to push out that morning.

I had the perfect content for the occasion in my portfolio, she explained, telling me which photographs I could use.

All I could do was feel embarrassed. I’d forgotten it was Holocaust Remembrance Day.

I have a different story to tell, I responded. We’ll run it as a retroactive piece, next Friday.

Brexit will turn three on the last day of January, over six years since the 2016 referendum kickstarted Britain’s race to the bottom. END_OF_DOCUMENT_TOKEN_TO_BE_REPLACED

Be careful what you wish for. It may be a cliché, but it’s one the Greens are learning all over again. END_OF_DOCUMENT_TOKEN_TO_BE_REPLACED

Before his arrest, Andrew Tate was just another influencer with bad politics. END_OF_DOCUMENT_TOKEN_TO_BE_REPLACED