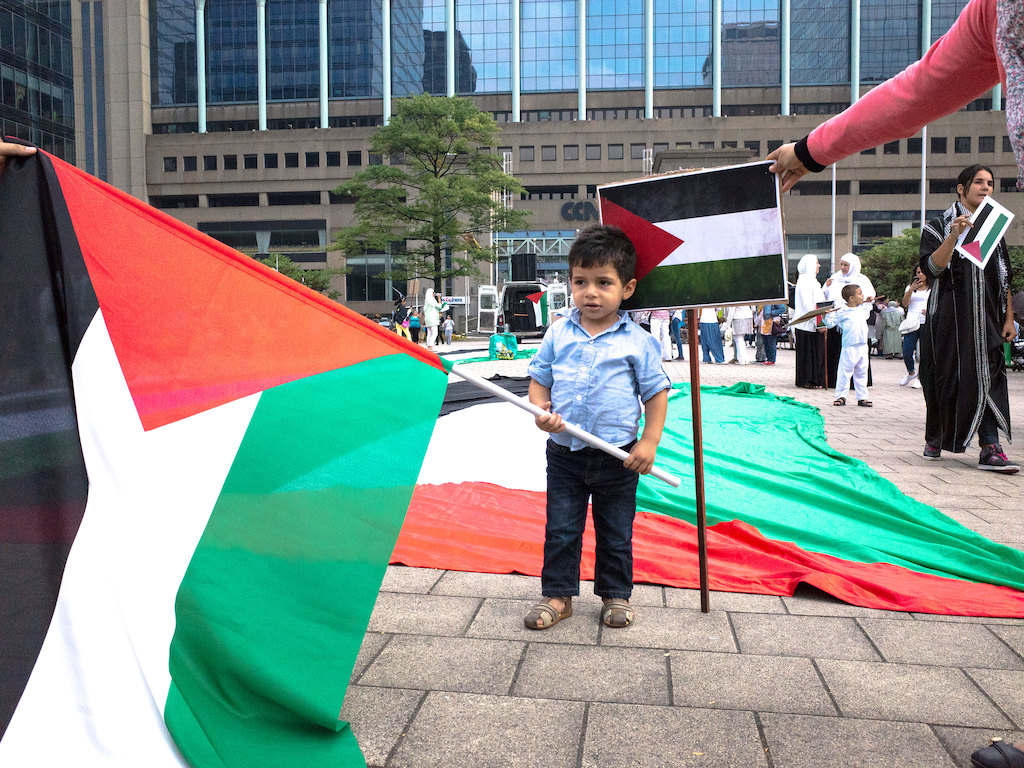 No one should underestimate Israel’s genuine anger at this bill. Any hint of economic pressure to end its 51-year-old occupation of the West Bank and Gaza Strip provokes a strong, visceral reaction from the Likud premier. At the same time, the Israeli government carefully orchestrates its reaction to the threat of economic action to ensure that it never has to face it.

Netanyahu understands the Irish bill will fail. The government opposes it, if for no other reason than the fact that it contravenes European Union laws requiring all member states to uphold the unitary nature of the single market. But he also understands the real meaning behind the bill and its success: the people of Ireland want to see Israel face the consequences of its disregard of international humanitarian law, and its abandonment of even the pretence of negotiating a two-state solution, in the hope that those consequences will make Israel change course.

A struggle in stages

The Palestinian people are still there, still living under occupation in the West Bank and Gaza, and conditions in both places are deteriorating. But as a major issue in international affairs, they’re losing prominence. There are many reasons for this disappearing act: the slow erosion of the post-World War II liberal order as the United States abandons old alliances, the growing indifference and irritation of powerful Arab leaders with the Palestinians, the man-made catastrophes in Syria and Yemen, the American hysteria over Iran, and more.

But the most fundamental factor is the long-term inaction by the international community. The Palestinians have watched as the United Nations passed resolutions, country after country published statements, held international conferences, and sometimes even shook their fists as their crocodile tears flowed. But the levers of power that could move Israel into different policies have lain untouched.

Those levers have long been in Washington and Brussels. The United States was the power the Palestinians turned to in the hopes that Israel’s military, diplomatic, and political patron would press its client into concessions. The Oslo Accords gave them hope that the US would act as an honest broker, at least to the extent that it recognised that resolving the occupation would increase regional stability and would also bring greater security to Israel.

The ensuing quarter-century proved this thinking to be folly. While the Palestinian political leadership grasped tightly to the American straw, Palestinian civil society recognised that the US would never pressure Israel in any meaningful way.

So, they turned to economic and popular pressure and started the Boycott, Divestment, and Sanctions movement (BDS). Modelling their strategy after the South African struggle against apartheid, the thinking was that this was a way to create meaningful pressure on Israel to change its policies.

Popular boycotts by themselves are unlikely to move a stable, successful economy like Israel’s unless tens of millions are taking part in them. Moreover, Israel’s place in the global tech economy insulates it against popular action. So do its growing military exports, whose destinations include an increasing number of EU member states.

Popular boycotts are just triggers. The threats they make are meant to stir debate and build political momentum. Divestment by businesses large and small come next, but the real goal has always been sanctions, the S in BDS. And the threat of sanctions is most powerful in the European Union. Just look at the sanctions imposed on Russia following its seizure of Crimea in 2014.

Israel and the EU: uneasy BFFs

The EU has been a favourite target for the Israeli right for a long time, and no one has shot more arrows at that bullseye than Benjamin Netanyahu. He has never missed an opportunity to remind the world where the Holocaust took place. Netanyahu waves the flag of historical victimhood at everyone but does so most pointedly at Europe.

Yet the EU is still Israel’s biggest trading partner, by a considerable margin. In 2017, more than half of Israel’s imports came from Europe, which was also the destination of almost 30% of its exports. At the same time, Israel was passing laws to discredit Israeli peace and human rights groups on the basis that they received foreign funding, most of which came from Europe.

Tension has been a constant drumbeat in Israeli-EU relations, yet the Union continues to do business as usual with Israel.

When, in 2015, the EU was compelled to finally obey its own laws and require Israel to label products from the West Bank as having come from the Israeli settlements (products made in Israel proper and products made by Palestinians in the West Bank were to be labelled accordingly), Israel claimed that this was a back-handed way of boycotting it.

As with the Irish bill, Israel was conflating the settlements — considered to be a contravention of international law by most of the world — with the state of Israel within its recognised boundaries.

Ironically, the distinction between the settlements and Israel reinforces European recognition of Israel’s legitimacy. The EU has many trade agreements with Israel, and by labelling Israeli products as such, they enjoy lowered trade barriers in Europe. The overwhelming majority of products and services that come out of Israel originate within the Green Line, the internationally recognised boundary of Israel. Netanyahu is crying discrimination when it is, in fact, demanding treatment that is different from all other countries.

Last month, Israel’s Ministry of Strategic Affairs and Public Diplomacy issued the second edition of a report entitled, The Money Trail: European Union Financing of Organizations Promoting Boycotts against the State of Israel. The report incorrectly claims that EU grants to human rights organisations which support BDS violate the EU policy that opposes the BDS movement.

The European Commission responded, pointing out that it does not use its resources to restrict free speech, and that the bloc’s regulations prohibit it from funding boycott activities, not groups who take a stance in support of them.

As the Irish anti-settlement bill shows, public opinion in much of the European Union is not supportive of Israel’s positions. In the United States, Premier Netanyahu saw more and more liberal-minded people, including many Jewish Americans, drifting away from Israel, and sympathising more with the Palestinians. In response, he eschewed Israel’s traditional efforts at bipartisanship and embraced the Republican party, with its more conservative and anti-Arab base.

In Europe, Netanyahu has similarly moved to embrace the Visegrád Group states — Hungary, the Czech Republic, Poland, and Slovakia — out of sympathy with their nationalist politics and their conflicts with the Commission. Of Central European background himself (the Netanyahu family hails from Poland and Lithuania), the attraction is both cultural, as well as political. If Israel were an EU member state, it would position itself in parallel to Visegrád, much like Italy’s far-right Deputy Premier Matteo Salvini has done in reaching out to Poland and Hungary.

Donald Trump has shifted the United States’ position much more firmly to the side of the Israeli right. He moved the US embassy to Jerusalem, accepts that Israel will not remove any more settlements or abandon the Jordan Valley, and has cut off all aid to the Palestinians. Americans, Israelis, and especially Palestinians who hope to see Israel change its policies have no choice but to look at Europe. But they see little more hope in Brussels than they do in Washington.

Despite the Israeli government’s oftentimes challenging behaviour, business as usual continues. The fantasy that Israel will just decide to, whether through an independent state or other means, allow Palestinians their basic rights and freedom, continues to play out in Europe. It’s hard to imagine that anyone really believes it anymore, and they shouldn’t. Israelis are no different than anyone else. Most see Palestinian freedom as a risk to their security. No one takes a risk like that if they don’t have to.

Israel has been trying for years to minimise the European Union’s ability to influence its policies, even though Brussels has rarely used this power. It can only complain about foundation support for progressive Israeli civil society organisations and news publications. But despite government efforts to increase trade with China and Latin America, there is no hope for alternatives to large scale trade with Europe for the foreseeable future.

The world cannot allow the despair that sits like a leaden quilt over the Palestinian territories to fester. The Trump Administration, whose policy in Israel-Palestine is being set by settlers like its Ambassador to Israel, David Friedman, and their supporters, has made its course clear. Even though the Irish bill criminalising business with Israel’s settlements is unlikely to be enacted (and even if it did, it would have minimal effect, as Irish business with the settlements amounts to some 1.5 million euros annually), it can lead the way to action, if the citizens of other EU member states demand it.

Whether it’s a call to adhere to international law and human rights norms, or demands for basic human decency, Europe has become the last hope for the Palestinians. Mere words will not suffice. The Netanyahu government understands they mean nothing and has made no secret of its intention to perpetuate the occupation indefinitely.

It’s a bleak and unpleasant plan. It is not a course the European Union would want to take. But the alternative is to watch the Palestinian situation deteriorate until revolt or catastrophe or both come about, which would be disastrous for both Israel and the Western alliance.

On that day, Israel and the United States will have much to account for. How will Europe judge itself? Benjamin Netanyahu is right to call on Europe’s debt to the Jews. The nature of that obligation is the kicker. It also requires ensuring peace and justice for the Palestinians in the Occupied Territories.

Once again, the UK finds itself at a dilemma over Northern Ireland. END_OF_DOCUMENT_TOKEN_TO_BE_REPLACED

It’s been one horror story after another. Since Vladimir Putin first invaded Ukraine, the press has been deluged with reports of raw materials shortages and Europe’s reliance on Russian energy imports. END_OF_DOCUMENT_TOKEN_TO_BE_REPLACED