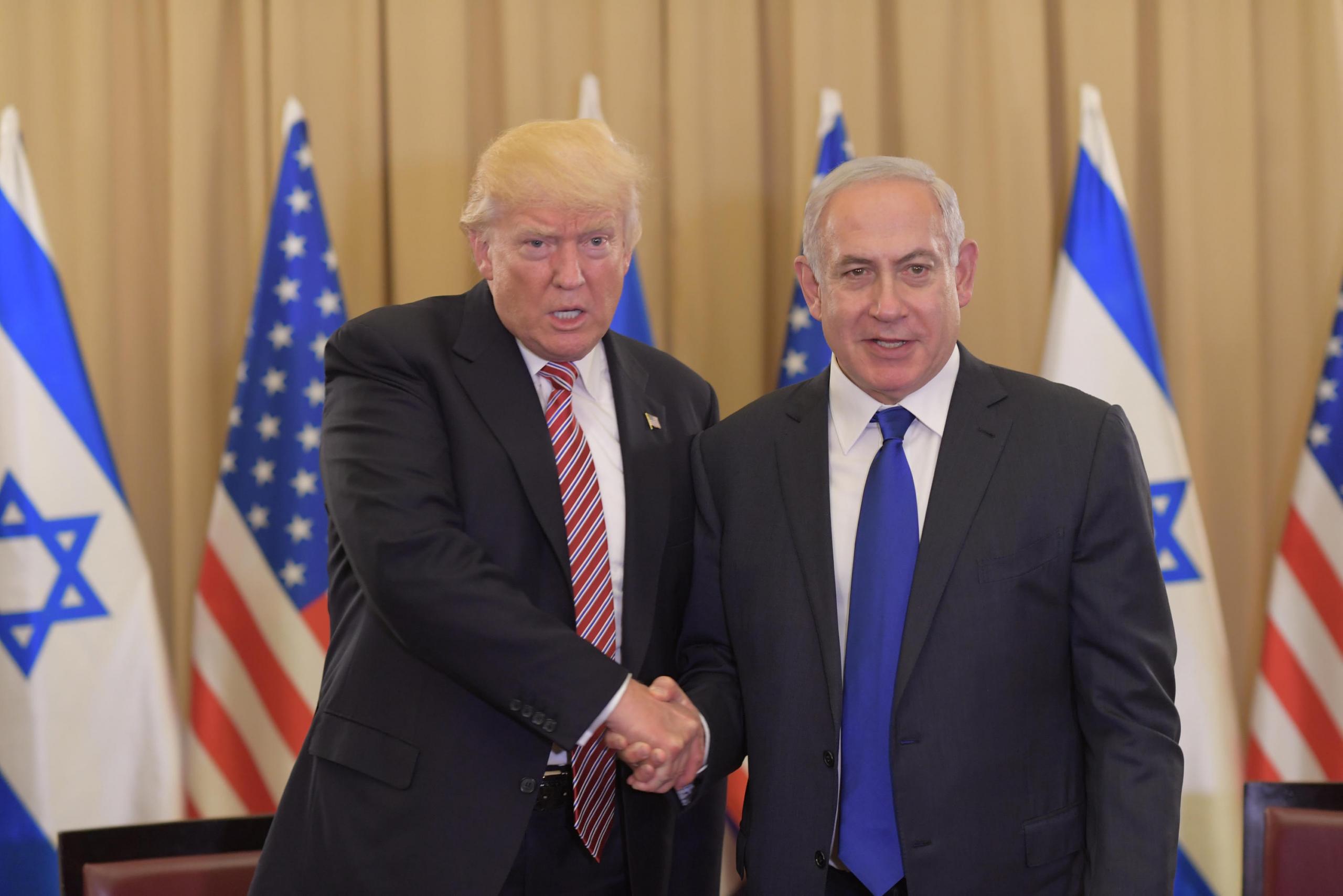 Emphasising such breakthroughs as the 1995 Oslo Accords, in which Israel committed to withdrawing from the Occupied Territories and the creation of an independent Palestinian state, there was little to disagree with their claims.

The peace process, as it was called, envisaged something far better than what has emerged: a permanent state of war between the two peoples, and the emergence of a single state in which even Palestinian citizens of Israel are losing their equality.

Drafted in response to the results of Israel’s 9 April election, in which incumbent Premier Benjamin Netanyahu held on to power, the letter could not have been more appropriate.

Running on a campaign that included a pledge to annex the remaining Palestinian territories under Israeli control, and, as wild rumours have it, mulling a reoccupation of Gaza and a new security zone in Syria, the incoming government’s agenda might as well be from the 1960s.

Its objectives and outlook are so decidedly anachronistic, it augurs a sea change in Israeli politics, as dramatic, at least to outsiders, as to make it unrecognisable.

Not to mention the changes in domestic politics the new government will likely usher in, concerning the role of religion and a decline in the power of the country’s supreme court. Israeli democracy is clearly in crisis and that’s being charitable.

But, domestic politics weren’t part of the agenda of The Guardian letter. Preoccupied with decolonisation, it reflected a typically European perspective, one birthed during the heyday of the post-war period, when Britain and France packed their bags in the Middle East and retreated back to Europe.

The trauma of that time, and of the conflicts that drove European forces out of Aden and Algeria, continue to linger in the Western European imaginary, so much so that Israel’s occupation, which began following the June 1967 Six Day War, always seemed like the sin qua non of European-Israeli relations.

Not the status of life within Israel, its fragile democratic institutions, and their incomplete extension to its citizenry. Not just Palestinian, but also non-Jewish European migrants, such as the Christian Russians who moved to the country in the 1990s, fleeing the collapse of the former USSR.

The peace process always took precedence, as though it were the key to unlocking all of the potential ills that afflicted Israel. Yes, of course, borders are important. So much of a country’s identity is dependent upon them, particularly in Israel, where a lack of defined national boundaries has been key to the power of the country’s extreme right.

But, little, if any lip service to the social consequences of the occupation, and its meaning for Israeli democracy, was ever at the top of Europe’s peacemaking agenda. It was always just the Palestinians, as if our enslavement of them did not also enslave Israel, in a way not immediately transparent to post-colonial Europe and its memories of its onetime empires.

Power corrupts, particularly when it is at the expense of other peoples. And, as the racism crisis continues to devour Europe, few care to remember where this hatred comes from and how it depends on a sense of superiority learned in colonial settings.

Most particularly in the Western European member states suffering from the worst racism crises of them all — France, Italy and the United Kingdom — where public discourse about minorities routinely dehumanises them and all but strips them of citizenship. That is if they haven’t joined ISIS.

But this is about Israel, not Europe, a country which is for all intents and purposes European, even though half the individuals under its jurisdiction, not to mention its own citizenry, are from the Middle East. Israel has to have borders if it is to arrest its colonial inclinations and all which that entails.

The problem is that the peace process never had a chance. It was a necessary compromise Israel’s right had to temporarily indulge, as it was a priority for the country’s Western allies in the aftermath of the Cold War when the international order was in turmoil and Israel had to do its subservient part.

The Western alliance’s Arab partners wouldn’t have it any other way, and it fit neatly with European guilt both for the Holocaust and the crimes committed against the indigenous inhabitants of its former colonies.

Israel and Palestine, living side by side in peace, would be the perfect closure and would help cement Europe’s own peace with the Middle East, one which would allow it to cooperate equally with both Israel and its neighbours.

As much as commentators are wont to attribute Israel’s failings to the growth of its political right, and the leadership of Benjamin Netanyahu, few if any ever acknowledge the role of the United States in its decline and the fact that at the same time that it was sponsoring the peace process, it was also plying Israel with billions of dollars in military aid each year.

The US and Israeli governments may have wanted peace, but the depth of military cooperation between the two countries, and the high level of defence exports to Israel were not incentives for peacemaking in the absence of a diplomatic horizon. They inherently prioritised strategic over social development, when America could have found other ways to grow Israel, both ideologically and economically.

But that’s another article unto itself. The point in referencing it is that Israel’s hyper-militarisation, under the auspices of American sponsorship, could have been better managed, to the degree that it did not reinforce Israel’s sense of isolation, and its need to feel superior to its Arab neighbours.

Factor in the chaos created by US intervention in the region following the 9/11 attacks, and the unravelling of neighbouring countries during the Arab Spring — partially at the hands of EU member states, such as Libya — and the incentive to engage in any more territorial concessions evaporated.

Better to hold onto a hostile Palestinian population in the Occupied Territories and limit Palestinian statehood, than share a border with all of that chaos. The Americans wouldn’t stay in the region forever to guarantee Israeli security and haven’t.

Controlling the Palestinians indefinitely would be the most appropriate compromise, even if it meant incorporating them within Israel’s own self-declared national boundaries.

Using the Palestinians as a buffer, from ISIS, and more recently, the Russians and Iranians, in Syria, made more sense than establishing another Arab state even closer.

Israel’s new far-right government, with its unapologetic racism and religiosity, is a reflection of that. Under different, less cynical leadership, it could have been different. There is no doubt about that. The resources within Israeli society are there, however, repressed.

But, if you are on the far-right, like Benjamin Netanyahu, the chaos surrounding Israel, and the threats to it, from states as terrifying as Russia, whose forces now sit next door, in Syria, are a perfect opportunity to mould the country in his own image. Crisis is Netanyahu’s brand. Without it, he’d be nothing.

Under such circumstances, the idea of arguing for a two-state solution is a no go. It’s not only not going to happen in the short term, but, increasingly looks like it never will. As usual, the Israeli right is one step ahead in anticipating what the consequences will be and proposing end game scenarios.

For example, ex-Netanyahu coalition partner, the Habayit Hayehudi party, championed the idea of a one-state solution during the last government, proposing annexation of 60 per cent of the West Bank, according to Haaretz , but withholding citizenship to Palestinians coming under Israeli rule.

Under such circumstances, the best the European Union could do is to help Israel form a more enlightened single state, one which is secular, and which has a formal constitution. After 71 years, Israel has yet to adopt one, which is one of the reasons why its political identity is so endlessly malleable and subject to hijacking by extremists.

The problem with the two-state solution was that it isolated both peoples from each other. Given regional predilections towards nationalism and theocracy, that should be enough of discouragement by itself, to dissuade peacemakers from encouraging Muslims and Jews from separating themselves from each other.

If Europe is to play a more constructive role in the Middle East and foster a real peace process, it must start with helping reform Israel, as a single, binational state for both its peoples. Anything less will be war. Like what we have, now.

Photograph courtesy of the Israel Ministry of Foreign Affairs. Published under a Creative Commons license.

Brexit will turn three on the last day of January, over six years since the 2016 referendum kickstarted Britain’s race to the bottom. END_OF_DOCUMENT_TOKEN_TO_BE_REPLACED

Be careful what you wish for. It may be a cliché, but it’s one the Greens are learning all over again. END_OF_DOCUMENT_TOKEN_TO_BE_REPLACED

Before his arrest, Andrew Tate was just another influencer with bad politics. END_OF_DOCUMENT_TOKEN_TO_BE_REPLACED