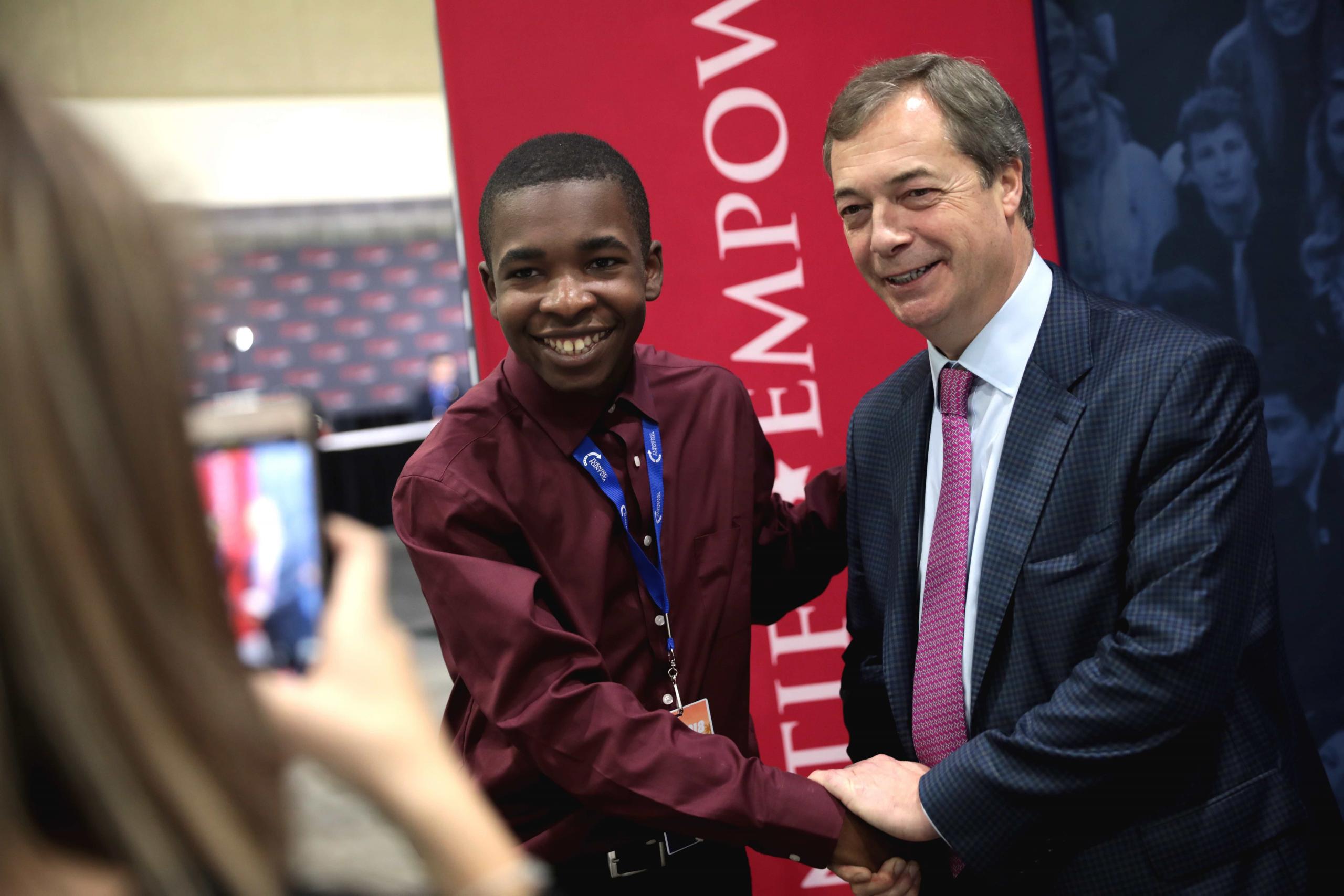 Except this new organisation isn’t quite a party in the conventional sense.

Despite its standpoint, the insurgent party is highly centralised to ensure Farage’s will goes unopposed.

The new formation has no democratic structure. It has fee-paying supporters rather than members with a role in policy.

“Our task and our mission is to change politics for good,” Farage explained at the party’s launch. “To change all aspects of politics in this country.”

Even stranger the new party has refused to define its agenda beyond fighting to leave the EU.

As a result, the Brexit Party has been able to bring together some unlikely allies around one common cause.

James Heartfield is standing for the Brexit Party in Yorkshire and Humber. He was a surprising addition to the party’s slate, not least because Heartfield still identifies as a Marxist.

It’s so depressing to see those on the left stating their support for Nigel Farage bc Brexit. I see no difference between “lexit” Farage supporters and those on the far-right. If you’re willing to support the far-right to fulfil your Brexit dream, you ain’t no leftie.

“I am glad of the opportunity to work with people from all backgrounds — left-wing, right-wing and liberal — to challenge the EU and make the case for democracy,” Heartfield said. “It would be criminal for me to run away.”

Heartfield was a member of the Revolutionary Communist Party (RCP), which broke away from the Socialist Workers’ Party (SWP) in 1978.

He isn’t the only RCP veteran either. Claire Fox is also running on the Brexit Party slate.

While most of the British left has become pro-EU, the RCP was among a small number of left sects that stuck to its Euroscepticism and identify with Lexit.

What brings Heartfield and Fox together with Farage is a common rejection of managerial politics. The million euro question is how they see it evolving.

“For fighting the European elections, and being just a month and a half old, it would be eccentric to create a proper branch structure,” Heartfield said.

GUYS. Paul Embery, regularly retweeted and endorsed by prominent figures on the Lexit Labour Left is speaking at a Nigel Farage rally.

When we talk about Blue Corbynism leading to red-brown alliances and helping the radical right… This is what we mean.

It’s a curious position to take, particularly for someone from a Communist background, for whom the party was always central to politics and not just a pragmatic fiction.

Looking towards the future, that was clearly on Heartfield’s mind.

“If the Brexit Party — as its current leadership aspires — goes on to set out a manifesto for the UK elections, then I think there should and will be a proper democratic structure,” he said.

The question, of course, is what kind of democracy could be imagined under Nigel Farage.

The End of Politics

It’s no coincidence that the Brexit vote happened after a long period of political stagnation, where all mainstream parties became increasingly alike.

The differences between the Labour Party, the Conservatives and the Lib Dems disappeared from the mid-1990s onwards.

“The left was wholly remade by Tony Blair and Peter Mandelson’s ‘modernisation’ campaign, which was mostly about driving ordinary people out of the governance structures of the Labour Party, and after that, out of social administration,” Heartfield said.

“Just like New Labour, the Delors Commission was very much a product of the social democratic left’s demise,” he continued.

“It favoured modernisation and market integration as an alternative to statist socialism.”

The places in England that felt the shift most were Labour heartlands in the North and in the Midlands.

In many traditional Labour constituencies, the Blair period cost the party dearly in terms of mass support as outsiders were flown-in to represent working-class areas.

“What people call ‘neoliberalism’ is for most people the removal of questions of social organisation from democratic scrutiny and contestation,” Heartfield said.

“Modern elites, lacking the basic policymaking machinery of democratically engaging wider society, instead derive most of their policies from inter-elite cooperation,” he said. “They get more from talking to one another than they do from talking to us.”

Constituencies ceased to be central to party organisation and local government, let alone national government. This process gave rise to a technocracy within the party, but it also cost Labour an estimated 5 million votes by 2010.

“There is a powerful movement to take decision-making away from ordinary people, and to ‘professionalise’ it, putting it in the hands of officials and bureaucrats,” Heartfield said. “That movement stems from the withering away of mass politics — it fills the void.”

“The European Union is the most strident example of that trend,” he said, adding, “which is why the vote to Leave was such a fabulous thing.”

It’s not the first time Farage has engaged in this kind of coalition-building.

As UKIP leader, Farage got on very well with trade union leader Bob Crow because they agreed on the Europe question and just about nothing else.

In 2016, Grassroots Out (GO) was an attempt to bring together populist forces of the left and the right against the EU. The UKIP leader even shared a platform with George Galloway.

The GO campaign floundered when hard-line conservatives recoiled in disgust. The new party has yet to run into such trouble.

“Maybe, later on, we will all fall out,” Heartfield said. “But as long as we agree on leaving the EU then I am happy to work on that basis.”

UKIP was such a success under Farage precisely because it was able to bring together disaffected Tory voters, free-market libertarians and the nationalist right.

Always quick on his feet, the former metals trader was able to finesse the tensions between British nationalist and libertarian ideals.

This is how UKIP became a broad right-wing counterweight to the Conservative mainstream. It allowed the party to develop a strong following and remain nimble on the issues of the day.

For example, UKIP was quick to drop its proposal to privatise the NHS once it became an embarrassing soundbite.

By contrast, the RCP was a campaigning Trotskyist organisation that backed open borders, opposed deportations and appalling ‘virginity tests’ carried out on Asian women coming to Britain.

Some observers would wonder why the RCP isn’t defending the EU’s freedom of movement, this journalist included.

“Freedom of movement for white Europeans has been bought at the cost of punitive attacks on non-Europeans,” Heartfield said.

“The most important question in the referendum debate was not immigration or borders, but taking back control of our government.”

Lets get some real perspective on occupying the same ground as the right wing and leaving the EU.
It’s just taken the right wing a long time to catch up to the Left. It was always a socialist agenda to leave the EU. #Lexit #Brexit pic.twitter.com/Ajn5YWL1wZ

If the Brexit Party doesn’t open up its internal structure, the discussion on immigration could be forestalled and Farage will continue to define the party message. This could well jeopardise the left-right alliance.

“I don’t agree with everything that Nigel Farage has said in the past, but when the Brexit Party was set up, candidates in the European elections wanted a positive message on immigration, that was against racism — and I think that shows,” Heartfield said.

“If I thought that the Brexit Party was going in the direction of racism, I would not be standing for it,” he added. “I would fight against it.”

How that promises to end Farage’s attacks on migrants, and, as The Guardianrecently pointed out, ‘globalists’, AKA Jews, means Heartfield will likely be busy.

Even though, of course, with an eye to taking over the Tories’ space in British politics, the Brexit Party chief wants to project the image of a moderate.

On everything, of course, except Europe.

The Search for Purpose

Since Farage gave up the UKIP leadership following the 2016 referendum, the party has gone through several leaders until it found a new cause: stopping Muslim immigration and fighting Islam everywhere.

It was at this point that Nigel Farage — who had always been happy to blow the dog whistle — decided to leave UKIP.

Although Farage has been inclined to demonise migrants suffering with HIV, the former trader knows when he sees a dead-end.

“Nigel Farage’s opinions are different from mine on a lot of things. His instincts are kind of right-wing, but he did not like the direction that UKIP was taking, so he pulled out — which I think is in his favour,” Heartfield said.

“Those left-wingers who shout ‘Nazi’ at him are just trying to avoid the obvious — that he, more than most, kept the question of leaving the EU alive, and challenged the mainstream orthodoxy,” he added.

After three years of debacles, UKIP leader Gerard Batten has managed to recuperate the party’s losses and consolidate its focus on a new constituency.

The party has adopted far-right anti-Islam activists like Tommy Robinson. This was the point when Farage quit the party and claimed it was “a spent force”.

UKIP has always been happy to court controversy, making YouTube micro-celebrity Carl Benjamin a candidate in the European elections and refusing to back down over the outrage at the candidate’s tweet to Labour MP Jess Philips: “I wouldn’t even rape you.”

The man who claims to be a classical liberal basks in the outrage about his comments.

Not content with taking the high horse of satire, Benjamin went on to claim he would rape the MP if he was properly coerced.

Naturally, the police are now investigating him.

UKIP may have lost its raison d’être after the referendum. Farage had won, so he went home. The party appeared rudderless for a long time, but it may have finally found a second life.

The original party of Brexit is trying its best to become the home of the alt-right.

What’s clear now is that the UK Independence Party was never the driving force in itself.

The Brexit Party has superseded it as a new battering ram against the establishment and its inability to deliver on its promises.

It may very well be trying to sell itself as kinder, gentler UKIP.

But given the man at its helm, it’s only a matter of time before the mask comes off and it’s back to Enoch Powell as usual.

Not many newspapers begin life like The New European.  END_OF_DOCUMENT_TOKEN_TO_BE_REPLACED

It’s remarkable how candidates in the Tory leadership race have channelled Margaret Thatcher. Especially as they’re barely old enough to have experienced her policies. END_OF_DOCUMENT_TOKEN_TO_BE_REPLACED

The Russians have struck Odesa again, this time mere hours after reaching a deal with the Ukrainians. Though spared the worst of the war, an attack on Odesa is an attack on the best of Ukrainian and Russophone culture alike. END_OF_DOCUMENT_TOKEN_TO_BE_REPLACED