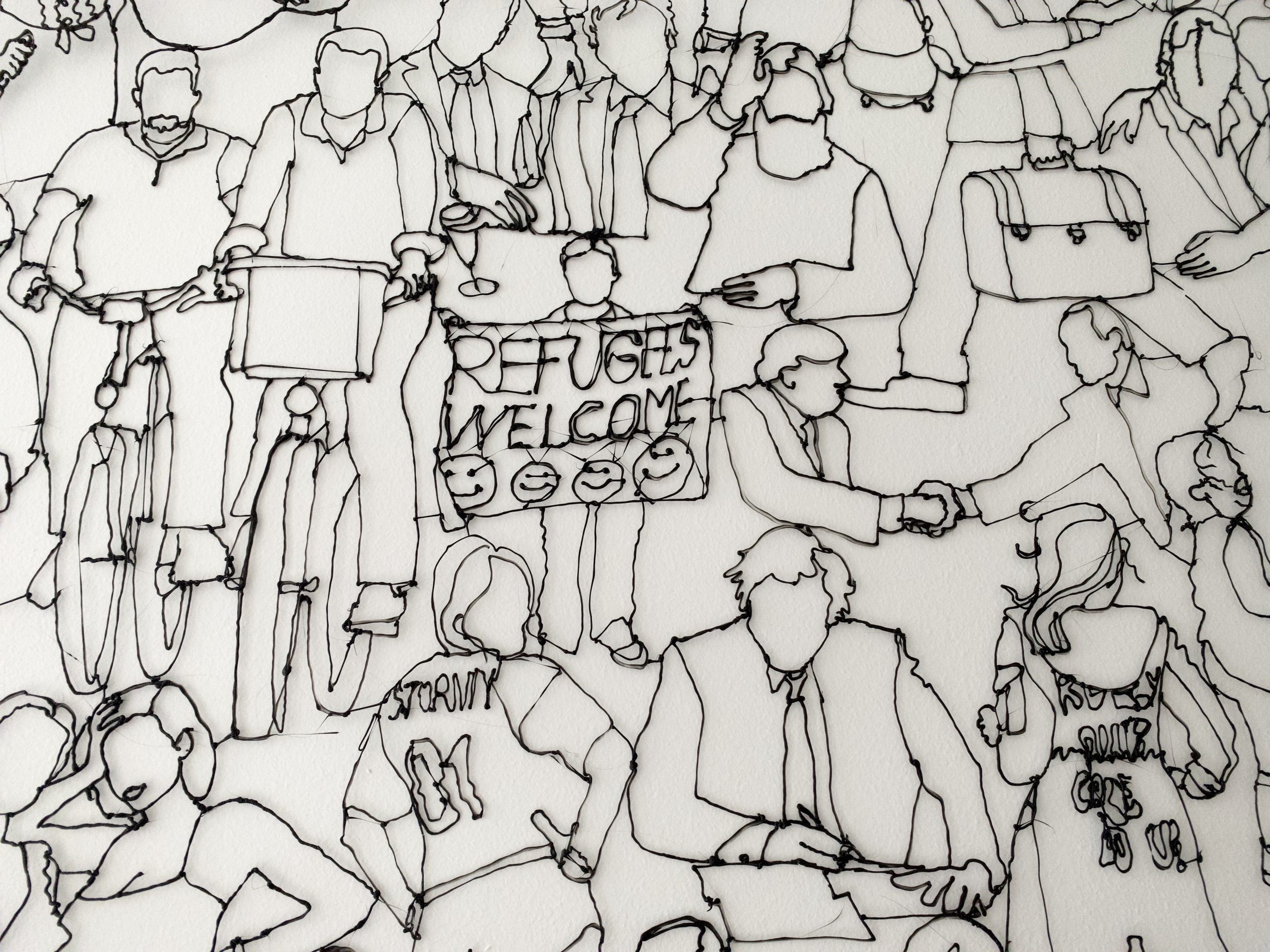 This So-Called World (No.1)

Dutch artist Marjolijn den Boer examines popular culture and the current political climate through her art. Her work is a social commentary on the topical issues of the day: What’s fake (news) versus reality, images of women and the #MeToo movement, innocence versus manipulation, the cult of celebrity in a selfie society, and political power.

Art as political and social commentary is not new.  What is new is den Boer’s use of different media to help us see ourselves more clearly – providing a unique perspective on popular culture.

Mixing art history, painting, book illustrations, films, photography, newspapers and social media to reflect present-day themes, she creates a version of our world that looks familiar and yet feels odd.

Juxtaposing past images with present-day objects, using striking colour and contrast, Marjolijn den Boer forces us to confront and reflect on the realities of our times: sunbathers basking on a beach with refugee lifejackets, an Inuit fisherman sitting on a lily pad in a Monet painting, a Manet model in a red bikini alongside a gun-wielding woman in a black burqa.

The combination of styles and media is arresting and thought-provoking.

A trained artist, den Boer clearly has an eye for the human form as well as the human condition.

When we spoke at her home studio in Brussels, I asked her about the themes in her work, and where her inspiration comes from. We also discussed den Boer’s unique method of mixing artistic genres, her recent use of 3D drawing, as well as upcoming projects.

Starting with her portrayal of women, we had fun looking at her paintings of All the Misses – unusual beauty pageant winners from the 1950s and 1960s: Miss Space, Miss Atomic Bomb, Miss Cactus, Miss Meat and her absolute favourite: Miss Frankfurter Queen, wrapped suggestively in strings of sausages (“Why would you do that?”)

Wondering for a moment whether perhaps those were more innocent times, we thought not. Beauty pageants feature a lot in her work. Den Boer believes they are at the root of the #MeToo movement.

In her latest work, Sub Arcadia, a pastoral frieze of full-size female drawings and hanging mobiles, den Boer combines historical icons – the Virgin Mary, Venus – with present-day celebrity figures  – Kim Kardashian, Stormy Daniels – prompting the question what has changed in the representation of women? Or perhaps who is manipulating whom?

I asked about her intriguingly named, The Inside of My Brain After Watching the News, which at first glance looks like a modern-day mash-up of a Renaissance woman.

On closer inspection, a myriad of images is revealed. Den Boer joked it felt like a punishment searching for images through tabloid newspapers every day and this was her way of dealing with it  – “because the reality is so awful”.

In another compelling series, politicians and celebrities are drawn in miniature, with the same colour outlines, placed strategically next to one another, creating a cast of characters in the form of a continuous collage.

Despite, or perhaps because of, their lack of facial features, the iconic images stand out, in signature poses: Vladimir Putin bare-chested, Emmanuel Macron with his bodyguard, Theresa May dancing awkwardly, Jean-Claude Juncker kissing everyone, and of course Donald Trump sitting front and centre, with Melania and assorted celebrities all around.

Another theme running through den Boer’s recent work is selfie culture. Seeing so many images of people taking revealing selfies of their bodies makes for uncomfortable viewing. Have we become a society of narcissists? Is that why Donald Trump features so much in her work?

Den Boer explains that today, the media allows anyone to be anything they want. A model in their bedroom, the editor of their own magazine. People may have nothing, but if they have Facebook and Instagram that’s all they need.

Donald Trump is the most featured politician in her work because he is so much in the news.

Den Boer’s next Trump-inspired images were already taking shape: a vignette of The Squad, the four congresswomen of colour told to “Go home” by the president, lay on her desk in progress, together with a diminutive Queen Elizabeth II next to a towering Trump.

I asked about the inclusion of Islamic women in Den Boer’s work. There are so many images of semi-naked western women with just a few images of  Muslims. The contrast is stark.

Here, den Boer confessed that as she prepared her recent installation, it struck her that she had depicted a white, privileged, female bubble. She wondered how that was possible when she doesn’t see the world like that.

Den Boer set about looking for images of Muslim women. But apart from ISIS propaganda, Muslim women simply weren’t visible in the media.

Her child bride series is worth mentioning at this point, consisting of anonymous veiled girls in block colours with the superimposed face of a reality TV star, evoking Andy Warhol’s image of Marilyn Monroe.

They are startlingly beautiful. Den Boer says she never uses children’s faces, but she wanted to see if she could make these unseen girls “famous”.

Marjolijn den Boer forces us to question what we are looking at, to interpret images and events according to our own experience and what’s happening in the wider world around us.

It was an act of contrition. In June, the King of Belgium returned a tooth to the Congo. END_OF_DOCUMENT_TOKEN_TO_BE_REPLACED

Few Italian elections since the turn of the millennium have felt more like the twentieth century than this one. END_OF_DOCUMENT_TOKEN_TO_BE_REPLACED

Not long after it opened in 2017, I paid my first visit to the House of European History.  END_OF_DOCUMENT_TOKEN_TO_BE_REPLACED