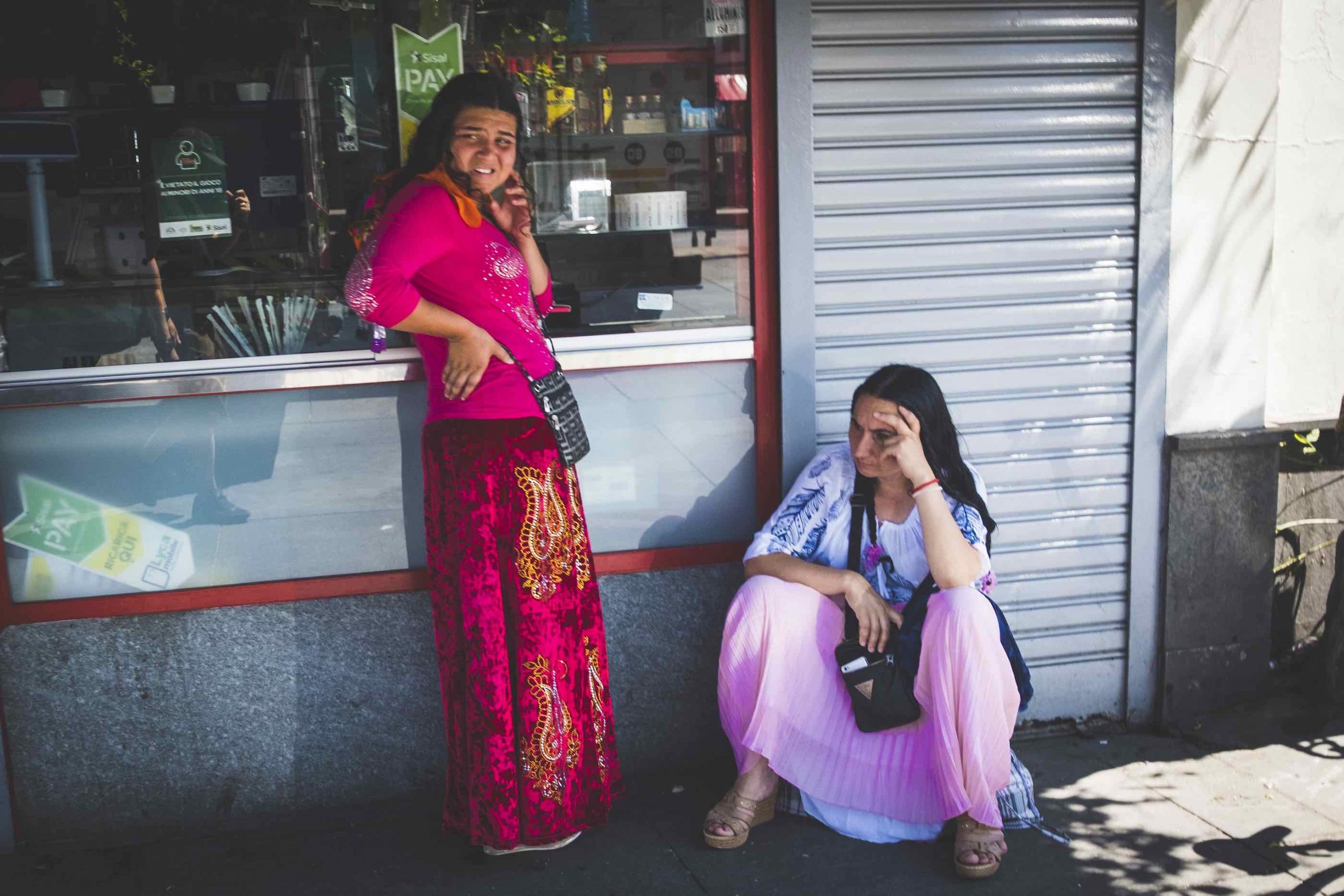 Most recently employed during an August rally of his Lega party in Arcore, Salvini was responding to a Roma woman who had been recorded saying the minister should be shot.

If you want to take the temperature of race relations in Italy under the current government, there is no better example than this.

Captured on film by the right-wing Il Giornale, a Berlusconi-affiliated newspaper allied with the deputy premier, the angry woman’s statement was like manna from heaven.

Well-known for his hatred of Italy’s Roma, Matteo Salvini made waves during his election campaign with a pledge to ethnically cleanse the country of the underclass minority group.

Placing them alongside the country’s clandestini (illegal immigrants) from Africa and West Asia, the soon-to-be interior minister had made an unprecedented pledge for a population transfer, the likes of which had never been made in post-war Europe, albeit the European Union.

Underlining the proposal was the fact that, even though a substantial number of Roma living in Italy are not Italian citizens, mostly hailing from southeastern EU member states such as Croatia and Bulgaria, and have a right to live there.

The distinction is an important one, to understand Salvini’s political ambitions. Though there are numerous legal obstacles to such transfers, the idea is that at some point, under his authority, civil rights will become defined by ethnicity, not law.

Human rights, for the deputy premier, are a relic of the past, which are negated by a fantasised criminal mindset of outsiders, who seek to colonise Italy and plunder its resources.

That these very same people, unlike the refugees, are both Italian and European, is beside the point. Their ethnicity, as a nomadic community originating in South Asia, is not.

The fact that such distinctions matter to Matteo Salvini, flies in the fact that Italians themselves are neither ethnically nor culturally homogeneous, and that the deputy premier himself is not inherently averse to outsiders. It’s just a question of which ones.

As the Lega chief’s well-documented admiration for Vladimir Putin and the growing mountain of evidence of Russian involvement in Italian politics attest, Salvini prefers Europeans.

Not just any Europeans but wealthy, white right-wingers from the East, who share his ideological program of dismantling liberal democracy and reinstating borders.

Indeed, the choice that Salvini has given Italians – Roma or Russians, Moscow or the Marrakesh – is one of class. Minorities mean poverty. Russians mean wealth.

For a northern Italian ex-communist, of middle-class background, Matteo Salvini’s preferences are obvious. Despite its capitalist reorientation, Russia still signifies an alternative to the West.

The difference between the Cold War version and today’s update is negligible. Russian communism was not egalitarian and highly nationalistic. It just packaged the contradictions in leftist clothing.

Though the Russians of that era actively supported left-wing political movements in Europe and in the Third World, both financially and ideologically, it was more about realpolitik than redistribution.

The appeal of Putin’s Russia, to former reds like Salvini, lies in the fact that it remains committed to global revolution, rhetorically, albeit under the guise of gangster capitalism.

Given the cultural similarity of this economic outlook with that of the Mafia version espoused by Italy’s less savoury elites, the kind that often underwrites its right-wing parties, and you get Matteo Salvini.

The overt racism, with its Nazi trappings, is just part of the package. Xenophobia is the handmaiden of inequality and the culture that sustains it. You can’t have one without the other.

That’s why its most outspoken and unapologetic proponents today, at least for the Western right-wingers who care to listen, are Russians like Putin and his ideologue-in-chief, Alexander Dugin.

The sheer wealth that Russia’s elites have accumulated since the end of the Cold War are in inherent contradiction with the ideology of the old order, even though it was just rhetoric.

The appeal to European populists is that Russia’s leadership formalised this worldview, in a way that is implicit in Western neoliberalism but not allowed. Salvini is the vanguard in embracing this.

The question we need to ask is why it works so well for him and not for other leaders in Western Europe.

Imagine what would happen if Angela Merkel made the same remark about Syrians, or Macron, Algerians. The outcry would not only be immediate but would lead to their ouster.

Not in Italy, in spite of the fact that such statements would be roundly condemned by the left and considered unconstitutional.

The problem is it wouldn’t be denounced enough to sanction government ministers.

As a colleague who works for an Italian broadcaster once told me, Italians aren’t inherently racist. They’re often minorities themselves, from remote areas in the country, of differing Mediterranean ancestries.

It’s just that they have no other recourse to express their frustrations, so they always fall back on salves like hate speech, as code, or because there are no institutional or political means to solve Italy’s problems.

The quandary is that Italy has grown increasingly diverse over the last three decades, partially as a consequence of its EU membership, partially due to a succession of refugee crises going back to the early 1990s.

Under such circumstances, even though Italians may be able to reconcile themselves to a limited degree of racism, between, for example, northerners like Matteo Salvini, and southerners like his co-deputy premier, Luigi Di Maio, xenophobia nonetheless escalates.

Yet, no one bats an eye at how insidious and destructive hate speech has become.

Inevitably, there is something sexual about the language and ideas driving it, as though it comes from a typically gendered, masculine insecurity about power and respect.

A perfect example are the fears Salvini expresses in his Facebook posts about foreign men. African men, in particular.

Like his Fucking Gipsy epithet, time after time, the interior minister will often publish stories about black men who he claims routinely expose their genitalia to Italian police.

Sometimes Salvini will use photos of the alleged culprits. Sometimes he won’t. Whether the stories are actually true or not, it’s hard to tell.

Even the photos, which always dispense with credits, leave doubts.

Ideally, one would expect the country’s top cop to be sourcing from his security services. But as is often the case with Matteo Salvini, the sources are impossible to verify.

It’s not about whether these stories are true or not, but how they can be used to normalise hatred amongst his followers, by sowing fear of rape and homoeroticism.

Such anxiety can only be mined in a country which, for three decades now, has gone from being an advanced industrial economy to an increasingly impoverished service one.

Not due to its migrant influx, but its own economic policies.

Under such circumstances, it becomes all too easy to blame outsiders, whether it be Brussels or Islam.

The fact that many of Italy’s economic difficulties are cumulative,  a consequence of corruption and offshoring of its industries, for example, is, of course, inconvenient to Salvini’s rhetoric.

Particularly when your party represents the interests of the elites who benefit from the status quo and not Italy’s besieged middle and lower classes.

In such instances, you convince voters that they are being threatened by outsiders, by people who look different, relieving your backers of the blame.

It’s a surefire strategy to convince Italians to direct their anger at fucking x minority, and for a brief moment, feel more privileged than they actually are – or ever will be.

Brexit will turn three on the last day of January, over six years since the 2016 referendum kickstarted Britain’s race to the bottom. END_OF_DOCUMENT_TOKEN_TO_BE_REPLACED

Be careful what you wish for. It may be a cliché, but it’s one the Greens are learning all over again. END_OF_DOCUMENT_TOKEN_TO_BE_REPLACED

Before his arrest, Andrew Tate was just another influencer with bad politics. END_OF_DOCUMENT_TOKEN_TO_BE_REPLACED