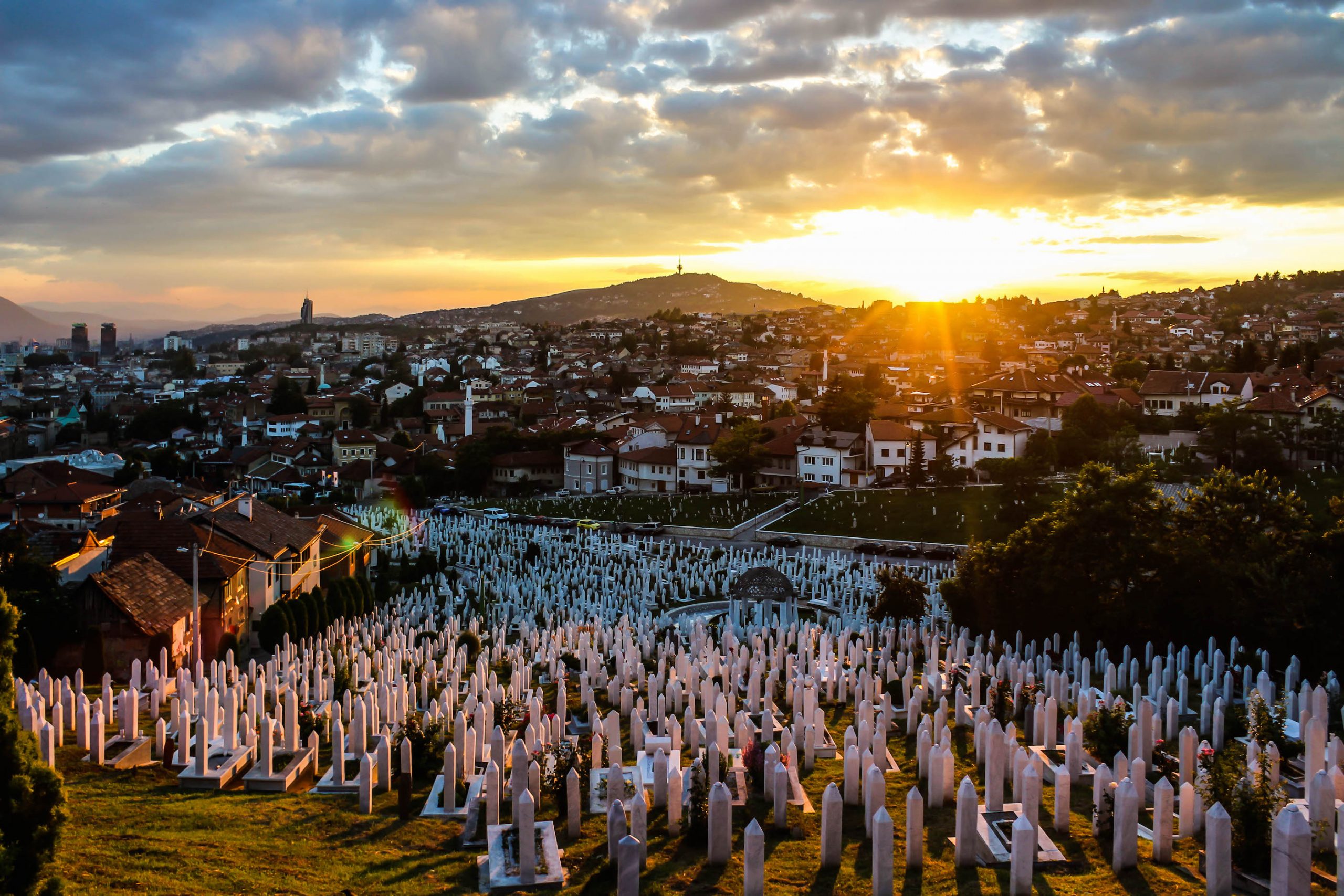 Professor Grebo was known throughout the city for his work as a legal scholar and as an activist, including for his friendship with Susan Sontag, the late American writer who came to the city during the brutal siege in the 1990s, in which the Bosnian capital was bombarded by Serb forces as part of their genocidal campaign during the wars of the former Yugoslavia.

Sontag’s visit to the city was part of her own trajectory as a singular 20th Century voice engaging with and uncomfortably parsing the clotted knot of tragedy of the post-Holocaust world. It also caught the city at a unique moment in its cultural experience, where art became a mechanism of defiance against the deadly and dehumanising actions of Serbian ultranationalists.

Before the war, Sarajevo – lazily often positioned as half-Vienna half-Istanbul – had been a hub of late-Yugoslav high culture, from ballet to avant-garde theatre. Sontag’s visit to the city drew upon these threads of high cultural practices and became a mediation between the voices of Sarajevan citizens and the West, who watched the city burn from the comfort of their televisions.

Theatre and cinema has a central role in Sarajevo, from the smoky Kino Bosna where teenagers kiss and musicians form groups then dissipate, to the more ‘mainstream’ emergence of the Sarajevo Film Festival as part of Bosnia’s post-war cultural recovery.

Sontag first came to the city in 1993 to meet with members of the Bosnian chapter of the International PEN movement, the freedom of expression and writer’s rights association she had been affiliated with since her campaign for Salman Rushdie during his fatwa, and an organisation whose Bosnian members included many of the brightest and most thoughtful authors and playwrights of the former Yugoslavia.

Citizens of Sarajevo recall how Sontag was entranced by the city: From its layer-upon-layer of architecture, music and stories from Ottoman Bascarcija to the wedding-cake Habsburg-yellow theatres to the Yugoslav communal housing. And haunted by what she heard about the siege.

In her New York Review of Books piece in 1993, Sontag describes how impressions of this first visit were strong upon her return to America – that she knew next time she came to visit the city, “I couldn’t again just be a witness.”

Connecting with Haris Pasovic, the revered Bosnian theatre director who had left Sarajevo when the war broke out in 1992 but returned in 1993, Sontag devised the plan to stage Waiting for Godot, Samuel Beckett’s modernist mediation on purgatory, meaning and human relationships.

A year and a half into the siege of Sarajevo, where fearful civilians were killed almost daily from the attacks from the surrounding hills, the play spoke to the horrors of limbo and dislocation, and the communication-breakdowns that arise in the warped realities of war.

Hence, the appropriateness of the play’s title. The name ‘Godot’, from godillot (military boots), evoked, for Beckett, the flotsam of war, the boots left behind, the messages waiting to be received.  The Washington Post dubbed the production “Waiting for Clinton” – Bosnians waiting for the humanitarian intervention or acts of solidarity from the West that, like Godot, seemed promised but ever elusive.

During the rehearsals, there was a discussion about how to best get the word out to citizens of the city about the production. Printing the time and date of the performance in a newspaper was perilous. If the newspaper blew to the hills where Serb forces were positioned to attack, news that a gathering was taking place in Sarajevo would likely make it a target. So instead invitations were passed, like gossip, through the city streets.

The performance received a standing ovation for the Bosnian actors, and the mayor of Sarajevo declared Sontag an honorary citizen of the city. Today, the square in front of the Bosnian National Theatre in downtown Sarajevo is named Trg Susan Sontag, in memory of her work to keep culture – and humanity – alive in the city, flickering like the eternal flame in Sarajevo’s Ferhadija, fragile but enduring.

Sontag’s vision of Sarajevo as a cosmopolitan, anti-fundamentalist haven, outlined in her 1993 New York Review of Books meditation on her time in the besieged city, is not without criticism.

Sontag places much emphasis on the ‘Europeanness’ of Bosnians, perhaps in an appeal to humanise them to Americans, like many western intellectuals in the 1990s engaging with Bosnian culture who made much of how in Yugoslavia, Bosnians bought their shoes in Italy and went to the opera in Vienna.

This approach is understandable. Not only to differentiate the social realities of Tito’s Yugoslavia from lazy western conceptions of “Soviet” life as the only paradigm of Communism (Yugoslavs, unlike many of their Soviet counterparts, could indeed go on holiday in Italy and go to the opera) – but to emphasise continuities and overlaps with Western European culture in a predominantly ‘Muslim’ city to western audiences, in order to underscore that they are like us, so we should care if they die.

Whilst a reasonable tactic, particularly in the world Sontag moved in, of the International PEN movement, supporters of Vaclav Havel, Milan Kundera and Salman Rushdie as secular symbols of ‘literary liberal humanism’, it raises a difficult question. If Bosnians had all been devout Muslims with no interest in Gucci and Schubert, would their lives matter less?

Waiting for Godot in Sarajevo in 1993 was both a flame to keep the fire of culture alive, to feel human, and a cry to the west, ‘Waiting for Clinton’, waiting to be heard and recognised as human.  Sontag’s advocation for humanitarian intervention in Bosnia, like that of Bernard Henri-Levy and other western intellectuals, may have dovetailed and metamorphosised into rhetoric that Sontag herself would later condemn.

9/11 happened only six years after the end of the Bosnian war and the “humanitarian intervention” rhetoric of the 1990s was harnessed by British Prime Minister Tony Blair as a fig-leaf for western military adventurism in Iraq, and the dehumanization and death that the War on Terror entailed.

Nonetheless, as Trg Susan Sontag stands in downtown Sarajevo, a reminder of the defiance of cultural life and humanism as an antidote to fundamentalism, and how Bosnians kept the flame of humanity alive even as others sought to destroy them.

Above the entrance of Bracken House, sits the face of Winston Churchill, set in a gold sunburst on an astrological clock. END_OF_DOCUMENT_TOKEN_TO_BE_REPLACED

Following a welcome ceremony on the evening of our arrival, the 27th annual Farkah Festival began. END_OF_DOCUMENT_TOKEN_TO_BE_REPLACED