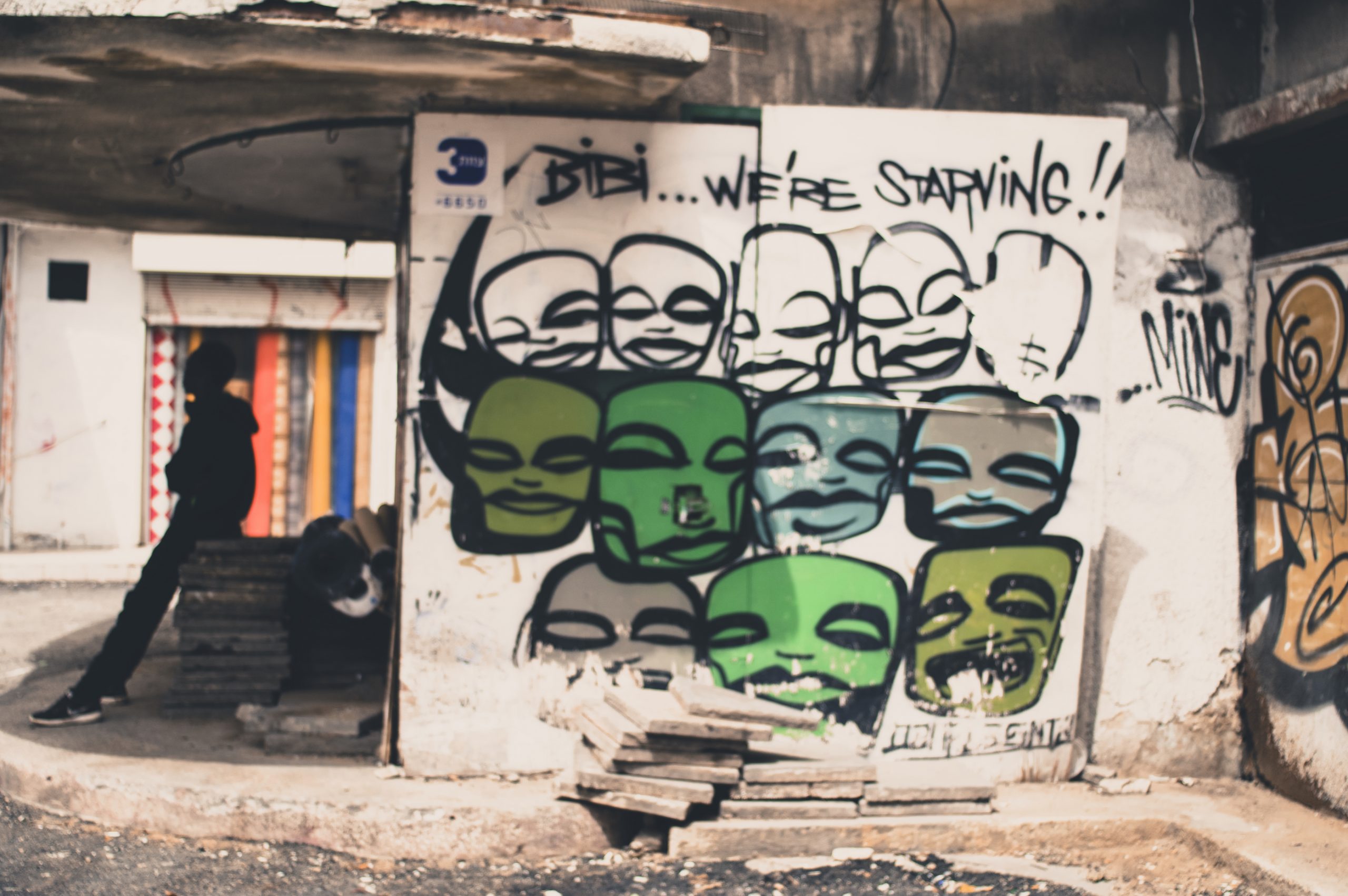 I remember looking over it quickly and seeing a number of keywords and phrases I’d grown leery of by then: Antisemitism, terrorism, the only democracy in the Middle East.

Legitimate political concerns, under Likud-led governments of the previous decade, the language had become ubiquitous and tied to defending the occupation of Palestinian territories.

I was a college student in the United States at the time. I should have been in Israel, doing my military service. But, I also had a US passport and used it to dodge the draft.

The war in Lebanon was still raging, focused on Israel’s then-security zone, in the south. An increasingly unpopular conflict, it helped make many Israelis sceptical of such rhetoric.

I can’t count how many fights we had about Netanyahu in the late 1980s and early 1990s. My Israeli-American family was riven with disagreement about him and what he portended for the future.

Like many American Jews of her generation, on Israel, my aunt was a conservative. Her Lithuanian father had been a senior member of the far-right Zionist Organisation of America (ZOA), which had been political home for the Netanyahus when Bibi’s family lived in the US. His influence showed.

“Benzion, little Bibi, and his brother Jonathan (nee Yoni), were our neighbours in Philadelphia when my husband was teaching there,” my aunt explained. “We’ve known them forever.”

Two decades later, long after my aunt had passed away, my father would find himself a neighbour to the family. This time in Caesarea, in Israel, where Netanyahu keeps a weekend home.

When I told him what my aunt had said, about living next to Bibi’s family in Philly, my father laughed and remarked, half-seriously “It’s impossible to rid ourselves of these people.”

Why my dad decided to move in next door to the prime minister, I will forever wonder. The house was nice, but the siege-like situation in the neighbourhood, crawling with security personnel, was not what an 80-plus-year-old needed.

Though Elie had his own security requirements, they were nothing compared to Bibi. This was the premier after all. Nobody has a bigger target on his back than the Likud leader.

But, being the old security official that he was, Elie symbolically reprised his role as a buffer. Smack in between Netanyahu and the Palestinian village of Jisr Az-Zarqa, every daily call to prayer echoed throughout my late father’s home.

When he first moved in, and I heard how loud the calls were, I asked Elie how Bibi must deal with it. My father replied, rather wanly, “We are his security wall. We absorb the noise.”

It was a characteristically ironic response from him. Of course, it wasn’t true. Netanyahu could hear the imams, and surely they irritated him. But nobody irritated Elie more than Bibi.

My father liked hearing the Muslim call to prayer. They were a reminder of the Muslim country he grew up in during the British Mandate. Few Israeli leaders have done more to erect walls in Elie’s memory, between Jews and Arabs than Bibi.

Though Netanyahu can’t take credit for the separation wall – that honour goes to my father’s former boss, Ariel Sharon – or the Jewish-only “apartheid roads” which crisscross the Occupied Territories, Netanyahu is separation’s best-known salesman.

That apartheid would become so important to a large segment of Americans – Evangelical Christians, along with President Trump – is instructive. Their investment in supporting the conflict speaks reams about their hostility towards diversity.

Hence, the unenviable frustration of America’s Jewish community, and its growing criticism of Israel’s mistreatment of the Palestinians. Bibi and his politics are an all too personal reminder of Jim Crow and the white nationalism of segregation.

That Jews played a key role in supporting its end, working tireless for equality for African-Americans in the 1950s and 1960s, is an annoying detail for the Israeli premier, who primarily relies on American support for his racist policies.

During the Obama Administration, Netanyahu appeared keen to bury this history of Jewish involvement in the Civil Rights Movement, as he sought to resist White House demands for a resumption of the peace process.

The core of his difficulties was establishing any semblance of a working relationship with Barack Obama. The ethnic tension between the two men was apparent from the start. The press would often frame it as a Republican versus Democrat issue. But, from a regional perspective, Obama’s blackness was just as important.

African migrants were pouring into Israel, frequently being branded a threat to security, if not a cancer, by government officials. It didn’t take much to understand Bibi’s hostility. Yet Obama still plied Israel with requested weaponry, providing it with the biggest military aid package ever.

This distinctly American aspect to Netanyahu’s tenure in office is one which, as it hopefully comes to a close, is often overlooked, as the primary model for Israeli racism is European colonialism in Africa, not the Antebellum south. Yet, for Bibi’s recent governments, that history is a part of its politics.

As the United States has been key to supporting Israel’s occupation of Palestinian territories since 1967, and American Jews have often been singled out for being its most iconographic settlers, I’ve often wondered why we didn’t frame the occupation using more American examples and ideas.

One reason may be because the American precedent is about two peoples living in the same state. African-Americans, after all, are Americans. Their citizenship is never a question.

Palestinians, on the other hand, are not supposed to be Israelis, even though they make up 20% of Israel’s population (1.84 million) and another 4.8 million exist under Israeli military rule.

Living under apartheid conditions in the West Bank, in a state of war in Gaza, and as second class citizens inside Israel, Palestinians experience every form of subordination possible.

Recycling framing that goes back over half a century, Israeli rightists do everything they can to blame the victim. We have no partner for peace. The Palestinians suffer from bad leadership. Their religion compels them to Antisemitism and jihad.

The fact such messaging remains commonplace when both Israeli and international media repeatedly offer consistently conflicting accounts of the official narrative, reflects the power Israel’s right continues to wield in the country.

Few can take more political credit for that than Benjamin Netanyahu. You just have to understand the depth of his achievements. Bibi made the occupation intellectually permanent. It’s impossible to imagine Israel without it.

Netanyahu’s recent proposal to annex parts of the Jordan Valley is a reflection of this, as he felt no inhibition promoting a blatant lie that they aren’t a permanent part of Israel already.

One cannot overemphasise its significance, as it once and for all abandoned the fiction that there’s an end to the conflict that will manifest in two states: Israel and Palestine.

The fact is that they are no longer viable independent national projects, but a single multiethnic entity at war with itself. Worse, nearly half the population lacks civil and voting rights.

While none of this will surprise anyone with even a smidgeon of familiarity with the Israeli-Palestinian conflict, it is of greatest significance for Americans.

Not just because the US helps finance this status quo but because of how it harkens back to African-American struggles for equality during the era of the Civil Rights Movement.

The trick, for policymakers and activists alike, is to conjoin Israelis and Palestinians and stop indulging fantasies of separation. Bibi may continue to find it useful, but all he ever has offered was the status quo. More racist, but the same.

The problem is that even Netanyahu’s own centre won’t hold. The only alternative under his tenure has been population transfer. Given how often this has been raised in his camp, it’s not unlikely that it would reappear if he survives. Trump would probably back it.

Talk of transfer, of forced population movement, inevitably conjures up the Nazi genocide and the upheaval of World War II. It is something Jews know all too well and informs some of our best, as well as worst politics, like those of Benjamin Netanyahu.

That’s why I recalled what my late aunt had to say about Europe. Like many Jews of her generation, the Nazi genocide savaged her, instilling a sense of vulnerability that makes the bellicose rhetoric of politicians like Bibi appealing and reassuring.

In comparison, ironically, things are a lot better in Europe now than they are in the Levant, or America, for that matter, where Antisemitic violence is at an all-time high and the president questions Jewish loyalty to the state.

The mass refugee movement from the region to my home of Germany is a perfect example. Something is better here, in spite of the history of war and the Holocaust, that makes it an alternative.

If there’s any way I could export my here to my there, to Israel-Palestine, I would. The difference is real, and in historic context matters. That’s what I’d tell my aunt if she were still alive. Somehow, I think, she’d appreciate it.

Photograph courtesy of the author. Published under a Creative Commons license.

Brexit will turn three on the last day of January, over six years since the 2016 referendum kickstarted Britain’s race to the bottom. END_OF_DOCUMENT_TOKEN_TO_BE_REPLACED

Be careful what you wish for. It may be a cliché, but it’s one the Greens are learning all over again. END_OF_DOCUMENT_TOKEN_TO_BE_REPLACED

Before his arrest, Andrew Tate was just another influencer with bad politics. END_OF_DOCUMENT_TOKEN_TO_BE_REPLACED