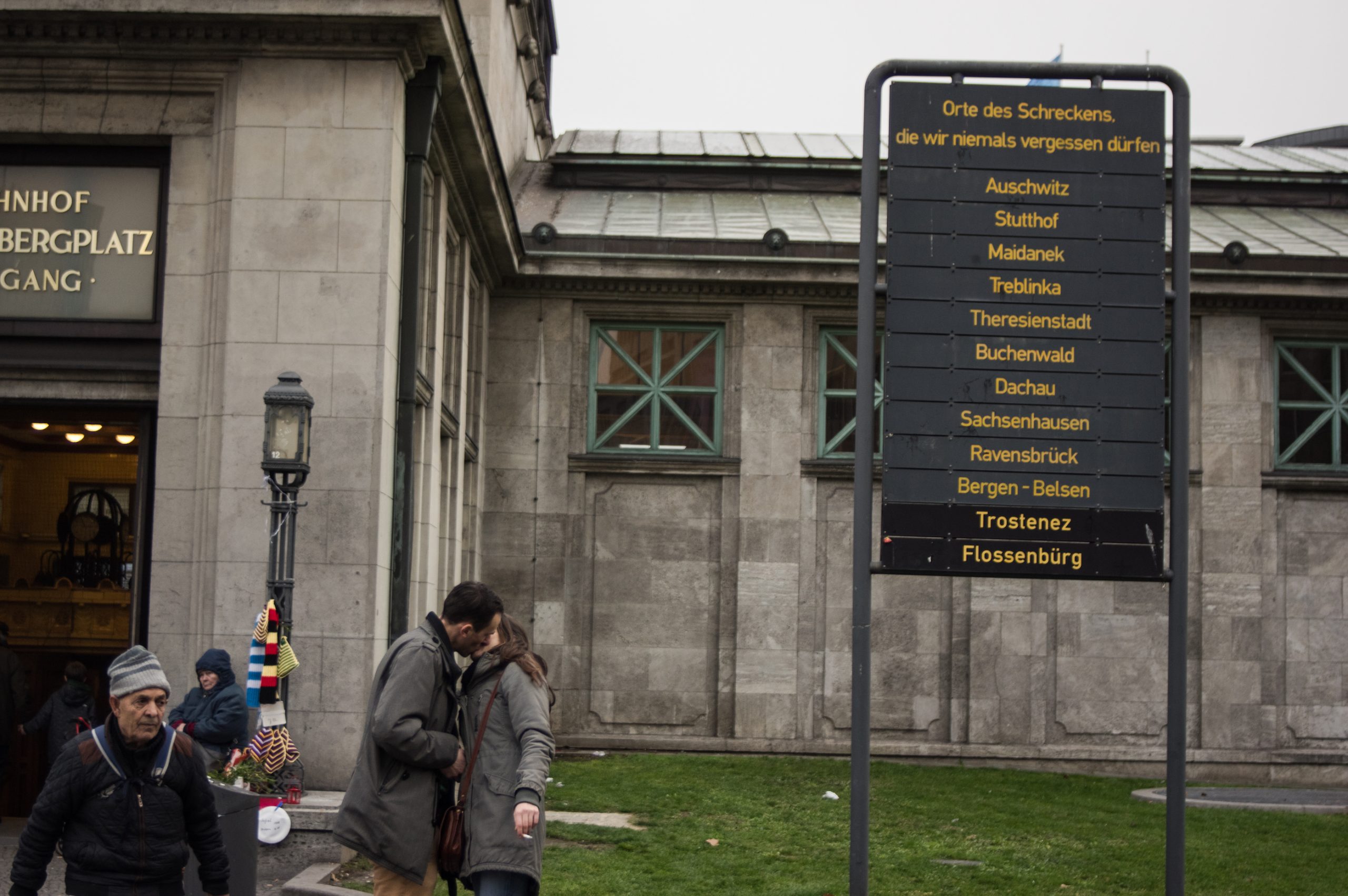 Love in a time of populism. Berlin, November 2016.

It’s not their interiors. The national carrier, Deutsche Bahn, build among the most comfortable railway cars in the world.

And Berlin’s municipal trains make getting around the city highly convenient.

It’s the act of taking them that I fear most.

It’s not rational. I know that.  But, if I can take my bike, walk or fly, I do. No matter the effort, or the extra cost.

The anxiety stems from stories about my family, which had immigrated to France before World War I. A number of them were deported by train to concentration camps.

Historically speaking, this was not exceptional. Trains are inseparable from the Nazi genocide. Everyone got to their destination the same way, more or less.

It’s where my ancestors came from that makes me nervous. My French cousins were originally migrants. Arie Schalit had moved to the country, with his wife and children, from Palestine.

The lure was a job in Paris, working for the Rothschild family, who had also employed him as an agronomist on projects in Ottoman Palestine.

The relative I knew best, Arie’s grandson Francis, told me he’d survived because he and his older brother had broken out of a sealed cattle car bound for Auschwitz, from Toulouse.

Talk about luck. You don’t hear many stories of Jews escaping their deaths like that. And if you do, they tend to be more Hollywood than not. Francis’ survival was indeed exceptional.

And so, in hindsight, is what happened to his relatives who didn’t escape. They’d died as an indirect consequence of our family’s return to Europe.

Growing up, I can’t tell you how many times I heard family members bemoaning that. It was a classic what-if situation, of regret, about the wrong choices made by Jews to stay.

It was also typical of the narratives which emerged after the war about Israel, and the role it played in saving Jewry from the Nazis. The moral of the story, in Zionist terms, was crystal clear.

The 600,000 plus Jews that became citizens when Israel declared independence in 1948 were there because they’d been smart enough to escape Europe when they could.

As an Israeli-American, who partially grew up in the United Kingdom, and who made Berlin their home the last decade, I’ve always assumed that it was my right – and duty – to break from that narrative.

What would be a better victory over Antisemitism than being able to reclaim Europe for Jews to live? Particularly Germany. That would be the ultimate comeback.

The freedom of movement that it implies is utopian. And still relevant, in terms of the politics associated with the refugee crisis and the Schengen Agreement, ending borders inside the European Union.

For someone who hails from such a small country, in which the only truly open border is the one facing Europe, it matters. It’s far more politically significant than moving to the United States.

The ease with which one can travel in the EU, from one member state to another, whether by car or plane, is something I will never take for granted precisely because of this.

That’s what I experience every time I return from Israel. In spite of what happened here during WWII, each time I pass through German immigration, there’s something liberating about it.

Europe always feels like it has more room. And Germany is the entry.

That is, until now, following the Yom Kippur killings in Halle, in which a far-right extremist sought to liquidate an entire synagogue congregation on the holiest day of the Jewish calendar.

Though the terrorist, Stephane B, was blocked by a strong synagogue door, he still murdered two innocent people. And, if he had been successful, would have killed around seventy.

The body count would have eclipsed that of the only comparable assault on a synagogue: last year’s Tree of Life synagogue attack, in Pittsburgh. Eleven Jews were killed.

Any Jewish life lost in Germany to racism would, of course, be controversial. The tabloid news headlines and the handwringing of government officials the last week are just a taste.

A successful terrorist attack, of the sort denied Stephane B, would have changed Germany and Europe. Every conceivable advancement, since WWII, would feel erased.

Never mind that many taboos associated with the Holocaust have already been broken. Especially since the refugee crisis, and the rising influence of nationalist parties and racism in Europe.

So much of what Germany defines as progress is embedded in the relative survival of its Jewish population. As there were no comparable pogroms against Muslims under Hitler, Islamophobia is often tolerated where Antisemitism is not.

That’s the prism through which I understand the Yom Kippur attack. The terrorist sought to overturn postwar taboos limiting discrimination against Jews, through an act of mass murder. Once and for all.

Living in Europe, I have often wondered when that switch would get flipped. When, the racism I often experience directed against me, and others, would turn into something far more dangerous.

Two weeks before the Halle killing was one such moment. Just arrived from Italy, I’d boarded a train to Neukölln, the heavily Middle Eastern borough of Berlin I call home.

A transit officer was checking to see if every passenger had paid.

When he got to me, I handed over my ticket, expecting him to look at it and move on. But, the transit officer did not.

The issue was that though I had paid the correct fare, I’d gotten the ticket for the wrong parts of Berlin.

I explained in English, in an American accent, that I was sorry. He appeared to let it go.

I thanked him, explaining that in the ten years I’d lived in the city, I’d always bought my train tickets for those areas returning from the airport.

The officer unexpectedly froze and asked me for my passport. When he saw it was Israeli, his eyes widened.

“You live here,” he said, as though we’d crossed some sort of rubicon, clearly surprised by my ID. I was then handed a 6o euro ticket.

I asked that the fine be reconsidered, as I’d paid the proper fare. He flatly refused.

The same exercise repeated with a young Asian-looking man sitting behind me.

He’d made the same mistake and also had paid the right fare – this time, for an entire month’s pass.

The man pleaded with the officer in English, who, unlike me, immediately told him he’d be fined.

Not only that. The officer explained he be charged with a felony too if he did not pay on time.

The other passenger he’d fined was from Italy. Of Chinese descent, but Italian.

The man was mortified at what happened. He’d read the situation correctly and made it clear he felt singled out.

So did I, I told him, apologising for the transit officer’s behaviour.

“Berlin is a tough city, I explained. “It’s going through a huge transition right now.” I didn’t know what else to say.

I got off the train early, as I couldn’t stand to remain given what had happened. I needed to walk off my anger.

I just couldn’t get over the fact that after years of anxiety about taking trains in Germany, this would happen.

If only such petty acts of prejudice could be limited to commuter trains like that.

As the attack that took place a fortnight later, in Halle shows, nothing occurs in a vacuum.

Trains are still trains and Germany is still Germany.

Foucault once suggested that Clausewitz’s famous observation, “war is not merely a political act but a real political instrument” carried out by other means, be reversed, with politics made an extension of war. END_OF_DOCUMENT_TOKEN_TO_BE_REPLACED

Brexit will turn three on the last day of January, over six years since the 2016 referendum kickstarted Britain’s race to the bottom. END_OF_DOCUMENT_TOKEN_TO_BE_REPLACED

Be careful what you wish for. It may be a cliché, but it’s one the Greens are learning all over again. END_OF_DOCUMENT_TOKEN_TO_BE_REPLACED