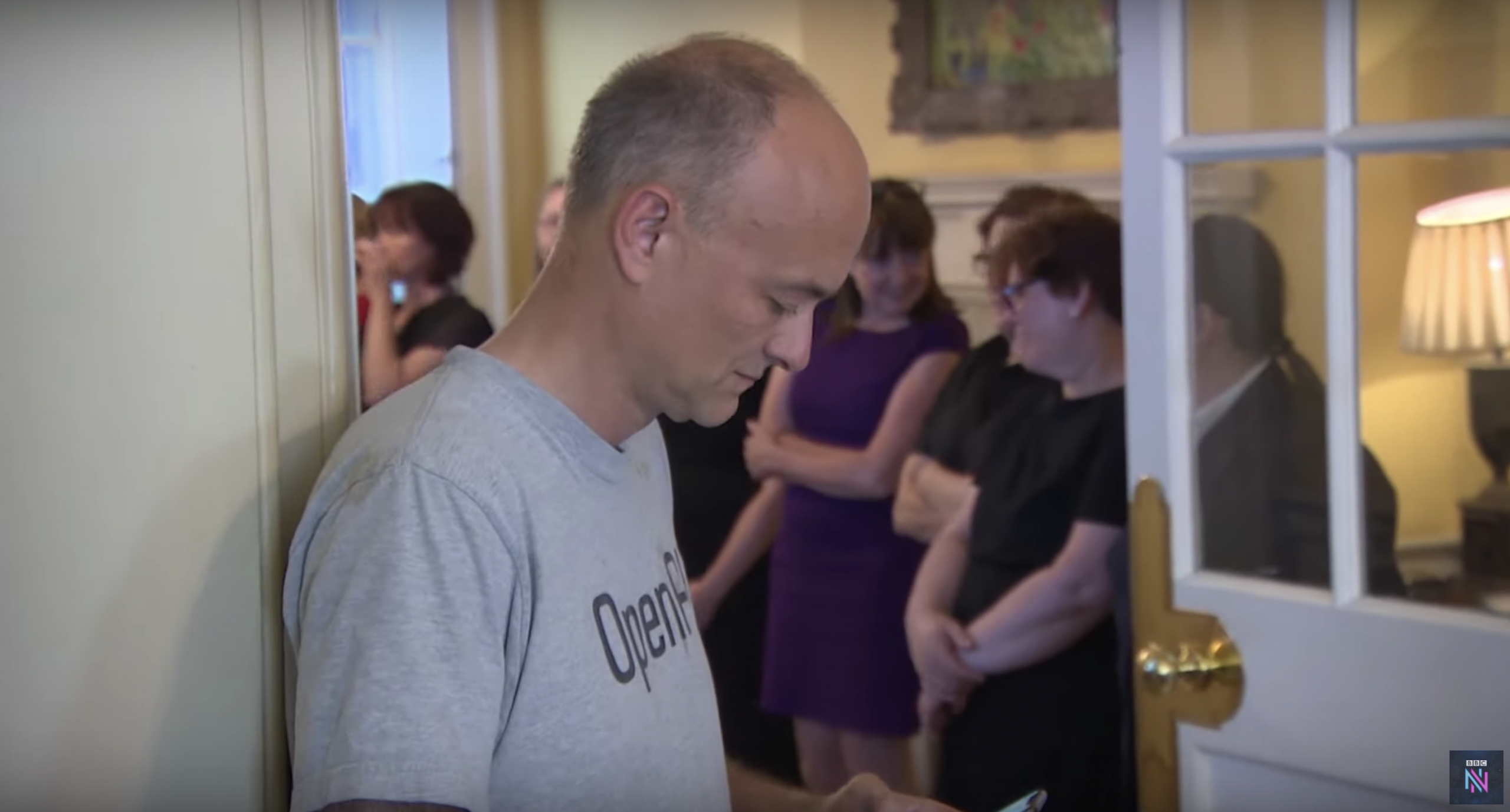 Special adviser Dominic Cummings ticks all the boxes. He’s the super-bright strategist behind the Leave campaign, the man who directed its controversial social media push and came up with its best-known slogan: ‘Take back control’.

Every prime minister has someone like Dominic Cummings. Margaret Thatcher had Norman Tebbit, Tony Blair had Alistair Campbell, Theresa May had Nick Timothy and David Cameron had Steve Hilton. Each figure was presented in the press as a shadowy Machiavellian figure.

We’re meant to believe Cummings is the power behind the thrown in the Johnson government. He is just a fresh example of a shadowy adviser exercising power and influence at the heart of Whitehall. This is nothing new, but it’s worth asking what it suggests about our politics.

This trope isn’t exclusive to UK politics. There are plenty of such characters in world politics. Some are mere special advisers, others are the practitioners of dark arts brought in to destroy political opponents by any means necessary.

The US has seen many presidents with a shadowy and sinister henchman, from Watergate burglar G Gordon Liddy in the Nixon years to Reagan-Bush era spinsters Lee Atwater and Karl Rove. In some cases, we find the centre of power shifts away from the president himself and towards someone like Henry Kissinger or Dick Cheney.

Even the left has its own versions. Many critics of Jeremy Corbyn blame his Brexit strategy on Seamus Milne and Andrew Murray, who are regularly labelled ‘Stalinists’. However, it’s a much more common trope in discussions about the right.

The best contemporary parallel is Steve Bannon, who is credited with securing Donald Trump’s earth-shattering victory in 2016. The former chairman of Breitbart is said to be the force behind efforts to build an international network of far-right groups working to break the liberal consensus in the West.

Yet Cummings and Bannon are a curious mix of the two archetypes. Both are seen as the power behind the thrown and the masters of the dark arts. However, the truth is always less sensational. What if the men in the shadows are more a figment of our imagination than we’d like to admit.

There is an unfortunate fruit called the common medlar that goes rotten before it turns ripe. Christopher Hitchens compared Tony Blair to the medlar, but the fruit remains relevant to the battle of ideas today. Much like the medlar, Steve Bannon started to rot before he was ripe.

Despite his clout on the American right, Bannon was in the White House for just a brief period. He was made a key adviser and even appointed himself to the National Security Council. But he was quickly cast down. Perhaps Trump was not happy with his adviser outshining him in the press.

Once out of the White House, Bannon set about building alliances with the European far-right in a bid to create a populist international. He claimed strong ties to Marine Le Pen in France and bragged about his support for Lega leader Matteo Salvini in Italy.

At the time, The Guardian ran reports on how Bannon was working to destabilise Western Europe. It would later turn out Bannon had spoken to Salvini on a couple of occasions, while Le Pen would later distance herself from the American. The European nationalists didn’t want US help.

Bannon had been betting on the European elections being the opening for a far-right wave to sweep away the mainstream liberal and conservative parties. He even founded a training camp for right-wing activists in the Trisulti Charterhouse in northern Italy.

Somehow, it wasn’t meant to be. The 2019 European elections were a disappointment for the radical nationalist right, and the Greens made a breakthrough after years on the margins. Meanwhile, the far-right training camp was soon forced to close its doors.

Now it appears Bannon is a spent force. But was he ever really the driving force behind Trump? The reasons why Trump won in 2016 were organic and not the result of any one intervention – whether it was Russia or Bannon.

It’s true the European far-right was happy to court him, but they didn’t really need or want an American to help them. The reasons why nationalism is doing well in Europe are endogenous and organic. It’s not due to outside influence, in other words.

So it goes, Bannon peaked before he could get any real power, and now it may be over for the American nationalist. It’s possible it will be the same for Cummings, the man credited with the shock-and-awe tactics of the Leave campaign.

We find a similar narrative in the UK around Brexit. Just replace Donald Trump with Boris Johnson and Steve Bannon with Dominic Cummings. Behind both we find the Russian hand directing dark money and online trolls.

The real reasons why Brexit happened are reduced to one-dimensional characters and rogue agents. There is no room for an analysis of what turned formerly pro-European areas in 1975 into Leave-voting constituencies by 2016.

Of course, Cummings has his own analysis:

“I thought very strongly that 1) a return to 1930s protectionism would be disastrous, 2) the fastest route to this is continuing with no democratic control over immigration or human rights policies for terrorists and other serious criminals, therefore 3) the best practical policy is to reduce (for a while) unskilled immigration and increase high skills immigration particularly those with very hard skills in maths, physics and computer science, 4) this requires getting out of the EU, 5) hopefully it will prod the rest of Europe to limit immigration and therefore limit the extremist forces that otherwise will try to rip down free trade.”

We’re meant to believe Cummings is an outsider, but somehow he has managed to get very close to power over the years. For example, he was an adviser to neocon Michael Gove during his tenure as education secretary before joining the Leave team.

The man may be obsessed with Bismarck and Dostoevsky, but his success as a political operative comes down to his capacity to exploit the folly of his opponents. It wasn’t his personal qualities and capacities that decided the vote.

It’s worth remembering that the official Leave campaign was a success because of its resources, access to data and the reach it had with popular narratives about the EU. Firstly, Cummings drew on pools of resentment built up for at least 25 years. It wasn’t just Facebook ads and dark money that swung the Brexit vote. It was the result of decades of failed politics.

Secondly, it wasn’t Cummings who masterminded the killer strategy of tapping into raw, impassioned xenophobia to bulldoze through the Remain campaign. He actually wanted to steer clear of playing to the anxieties about hordes of migrants turning up on the shores of Dover. This is also why Farage and Banks were excluded from the official Leave campaign.

It wasn’t until Cummings found his less aggressive strategy was floundering that he decided to reach for the Farage playbook. Much like Gove, Cummings is basically a social and economic liberal who believes in noble lies. Immigration was just a card to play under certain circumstances.

Cummings is not a nationalist, but someone who sees the UK’s break with the EU as the means to curtail nationalism in the long-run. Those with a sense of history will recall the words of Keynes: “In the long-run, we’re all dead.”

Now in government, Cummings faces the difficulty of asserting his agenda and navigating the complex inner-workings of the British civil service. He may despise the civil service, but he still has to work with them to achieve his goals.

What’s certain is that it’s much harder to operate in government than it is to run a single-issue opposition campaign. The latter is just about getting the infrastructure in place and putting it to use, but the former is about power politics in the heart of government. This is very much uncharted territory for the Mekon.

Screenshot courtesy of the BBC. All rights reserved.

Brexit will turn three on the last day of January, over six years since the 2016 referendum kickstarted Britain’s race to the bottom. END_OF_DOCUMENT_TOKEN_TO_BE_REPLACED

Be careful what you wish for. It may be a cliché, but it’s one the Greens are learning all over again. END_OF_DOCUMENT_TOKEN_TO_BE_REPLACED

Before his arrest, Andrew Tate was just another influencer with bad politics. END_OF_DOCUMENT_TOKEN_TO_BE_REPLACED