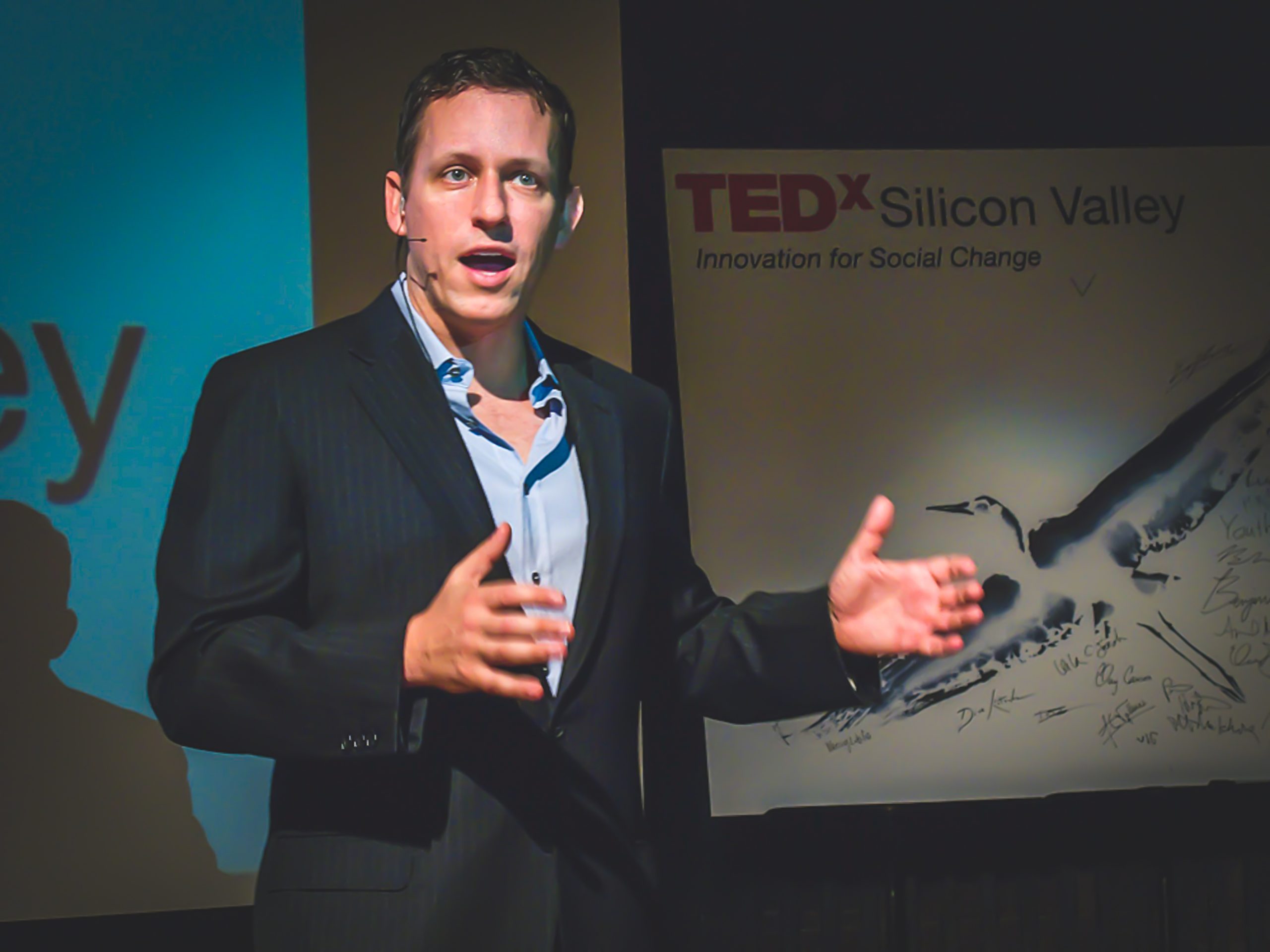 The Trump of tech: Peter Thiel.

We were told that the Brexit Party was the next great menace. We were told that Farage was going to stomp to power on the back of Northern Labour voters. Yet here we are in the second week of the election campaign, and Farage has decided not to run and not challenge the Tories in 317 seats.

It’s not surprising given that the Brexit Party had very little infrastructure to challenge 600 incumbents. The party was losing support among Leavers and shed 20 candidates shortly after the election was called. The new strategy is to refocus efforts on the Northern Labour Leave vote. However, this could well be a misstep for the party.

Farage’s gamble could just end up dividing the right-wing vote in Labour heartlands. It’s true that withdrawing Brexit candidates from the Tory seats could help consolidate the Conservative vote, and the same may be true in Labour areas.

Nine out of ten Brexit Party voters would vote Tory if the party doesn’t run a candidate in their area. While Farage could draw one Labour vote for every Tory vote he wins, this might not be enough to sway the balance in Northern constituencies. The real danger is, if Labour voters don’t turn out, the Conservative Party could slip through in certain areas.

In the past, Labour has taken working-class Northern voters for granted and paid the price for it. New Labour had lost 5 million votes by 2010 thanks to its triangulated platform of deceit and war. Jeremy Corbyn has a steep hill to climb, but so does Boris Johnson.

What Farage has been good at is exploiting the weaknesses of the two-party system. He is smart enough to know that his party is not going to smash ‘the red wall’ of Labour seats. It may be that Farage wants to cut into the Tory vote because he prefers the stalemate to a Conservative majority. The man was always a wrecker.

The Brexit Party lacks a conventional structure. It was founded as a private company, a data start-up in fact. This choice of organisational form demands close examination. It may sound like a strange choice of vehicle, but it’s really not.

Supporters can sign up and donate to the party if they wish, but they aren’t members in the conventional sense. The party is structured to grant Farage unparalleled power over the direction of policy. This is what UKIP founder Alan Sked described as “the Fuhrer principle”.

At the same time, the Brexit Party has adopted part of the model of Italy’s Movimento 5 Stelle (M5S). This is a form of e-democracy, whereby party supporters vote on policy. The crucial difference may be the social base being mobilised.

The Brexit Party is appealing to disaffected Tories on the hard-right and non-voters, as well as some former Labour voters. Yet the final category is very much exaggerated in the press. The real danger to the Labour Party are working-class voters won’t turn out on election day.

Of course, the project is still a top-down operation but the result was a curious platform. It includes pledges for £200 billion in infrastructure investment outside London and a proposal to abolish the House of Lords and replace it with an elected second chamber. The party is even calling for proportional representation.

This smorgasbord is supposed to draw in voters outside the two-party system. However, elections are rarely fought on just one issue and Farage’s platform lacks the reach of his central promise: a clean, no-deal Brexit.

The fact that Farage and Tice chose the form of a start-up data company for their new project is not insignificant. For starters, the model allows the party to operate in a different way to traditional membership-based parties. As a result, the Brexit Party may be far more nimble than other parties – so long as geography doesn’t matter.

Co-founder of PayPal Peter Thiel favours start-ups precisely because they mark a return to traditional forms of hierarchy. “A start-up is basically structured as a monarchy,” said Thiel in a lecture. “We don’t call it that, of course. That would seem weirdly outdated, and anything that’s not democracy makes people uncomfortable.”

“It is certainly not representative governance,” said the billionaire. “People don’t vote on things.”

Contrary to popular conceptions, Silicon Valley is as much a playground for Ayn Rand fanboys and neo-reactionaries as it is a haven for liberal entrepreneurs like Mark Zuckerberg. People like Thiel may be much more representative of the Silicon ideology.

“We are biased toward the democratic/republican side of the spectrum,” said Thiel. “That’s what we’re used to from civics classes. But the truth is that start-ups and founders lean toward the dictatorial side because that structure works better for start-ups.”

It may be a straight monarchy at first, but it wouldn’t be an absolute dictatorship. Instead, it would fit what Thiel called an “archaic feudal structure”. The guy at the top is vested with a vast amount of power and ability, but they are accountable if it goes wrong (at least according to Thiel).

Thiel was adamant that this structure was the best possible for a young company. “It is more tyrant than mob because it should be,” he stressed, adding, “Start-ups can’t be democracies because none are. None are because it doesn’t work.”

“If you try to submit everything to voting processes when you’re trying to do something new, you end up with bad, lowest common denominator type results.”

There are many different forces backing Brexit. The British ruling class has always been divided over the European question, and the reasons behind the fault lines are less clear than we might first assume. The section of capital behind Brexit is a strange collection of small-to-medium-sized enterprises, household names and obscure hedge funds.

Yet the most important section of capital is finance, not pub chains like JD Wetherspoons. Hedge fund manager Crispin Odey is a much more representative figure in this saga than Tim Martin. The financiers who backed Brexit have been cashing in on the pound.

It’s no coincidence that Farage comes from the financial class, alongside Arron Banks and Richard Tice. These three men have long records in business and financial services. Farage was a commodities man and Tice has a background in real estate and asset management, whereas Banks comes out of the insurance industry.

Richard Tice has been tied to offshore tax havens more than once. He has long been a shareholder in Sunley Family Limited, which routes its dividends through the British Virgin Islands and Panama.

Tice is the CEO of the asset management firm Quidnet Capital. The firm has amassed £500 million in assets since its formation in 2010. Before joining Quidnet, Tice was the CEO of the real estate company CLS Holdings from 2010 to 2014. The company has a portfolio of £1.9 billion in property holdings.

Quidnet Capital has a real estate investment trust (REIT) listed on the International Stock Exchange based in Guernsey. The Channel Islands stock market is a great place to list if you want to avoid tax, get around regulation and take advantage of opaque structures.

Similarly, Arron Banks and Nigel Farage both have been tied to companies and trusts based in the Isle of Man. Banks ran the Manx Financial Group out of the island and was tied to a BVI company in the Panama Papers.

The BVI company was PRI Holdings Limited, which was, in turn, the owner of African Strategic Resources – another BVI company managed from Gibraltar. By contrast, Farage set up the Farage Family Education Trust 1654 for “inheritance purposes” (though he insists he never used it).

During his career, Farage worked for Drexel Burnham Lambert, the notorious bank that pioneered junk bonds and later collapsed in disgrace. He was a ‘City Boy’ in the Big Bang of 1986 when Thatcher tore-up UK financial regulations.

The son of an alcoholic stockbroker didn’t just follow in his father’s footsteps. He went much further. Nevertheless, the boy who went to Dulwich College has been able to pitch himself as a man of the people thanks to his ability to hold a pint and turn a phrase.

No doubt people like Banks, Farage and Tice fantasise about a small state, free-market utopia, but the truth is they’ve got what they wanted for the last 40 years. We’ve had austerity, we’ve had deregulation, we’ve had privatisation and we’ve even got a points-based immigration system for non-EU nationals.

The UK has gone through an unprecedented process of deindustrialisation. The origins are often traced to the 1979 election when Thatcher won, but the truth is the period of decline began with the breakdown of British imperial power and the loss of the colonies.

The UK no longer had a captive market for its exports and began to fall behind once it had to compete on quality with other European countries. Over the decades since decolonisation British economic policy has shifted away from manufacturing towards finance. The fall of the pound after Brexit could have helped the manufacturing industry, but there’s not much left to revive.

This is why Britain is not going to be a buccaneering capitalist nation-state, especially if Corbyn walks through the doors of 10 Downing Street. The past may have been defined by the right, but the future is up for grabs.

Not every media organisation can bear criticism, even self-criticism, but others require it to keep going. END_OF_DOCUMENT_TOKEN_TO_BE_REPLACED

Foucault once suggested that Clausewitz’s famous observation, “war is not merely a political act but a real political instrument” carried out by other means, be reversed, with politics made an extension of war. END_OF_DOCUMENT_TOKEN_TO_BE_REPLACED

Brexit will turn three on the last day of January, over six years since the 2016 referendum kickstarted Britain’s race to the bottom. END_OF_DOCUMENT_TOKEN_TO_BE_REPLACED