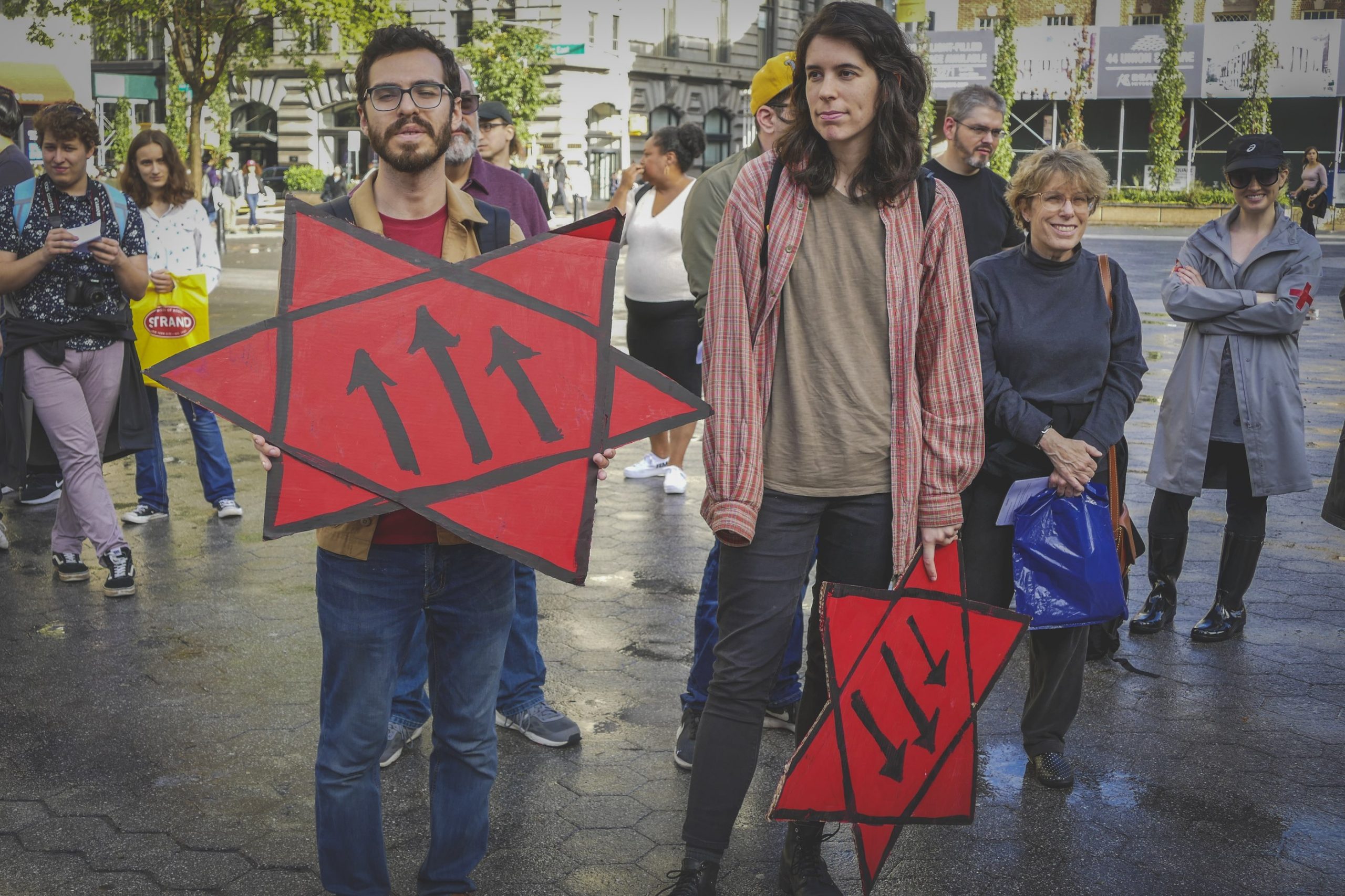 Penned by longtime Atlantic correspondent (now editor-in-chief) Jeffrey Goldberg following the Charlie Hebdo attacks in January 2015, in which four Jews were killed by French Islamists, the article was a typical expression of American Jewish anxiety about Europe.

Home to the world’s largest Jewish community, almost entirely drawn from European Jews fleeing racism and poverty during the 19th and 20th centuries, such responses are instinctive, if not always understood.

Unsurprisingly, Goldberg asked whether Islamist violence warranted resuming the process, wading into a growing dialogue amongst European Jewish conservatives about their difficulties with the continent’s growing Muslim population, and why countries like France and Germany should make greater efforts to limit immigration.

A lifelong Zionist, who’d volunteered for service in the Israel Defence Forces, the American pundit was not above identifying with their concerns. Whenever there is an upsurge in Antisemitism in Europe, Israeli politicians routinely exhort Jews to “come home”. Particularly on the right.

Unsurprisingly, Prime Minister Benjamin Netanyahu had already reiterated the invitation during a solidarity visit to Paris after the attack and a number of French Jews had followed suit.

As an Israeli national who “returned” to Europe over a decade ago, I’ve always been mindful of such anxieties. But having grown up, in part, in the United Kingdom and Italy, in the 1970s, and with a third of my family still in France, my personal ties to the continent trumped them.

The Europe I know, while by no means easy to live in – for example, my late father worked in Genoa for a decade, at the height of the Years of Lead, and I attended school in London in the late 1970s, when IRA bombings were not uncommon – was always home to me.

Coming from an Israeli family, the violence was familiar, albeit a bit less intense. We just looked at it as being political, not racist. I can’t recall how many conversations I had with my relatives to this effect.

But, from an American Jewish point of view, like that of Jeffrey Goldberg, such violence would always be assumed to be ethnic, even if it wasn’t explicit. Though the United States has always been plagued by racist violence, the peacefulness known by its Jews is historically unprecedented. Everywhere is more dangerous for us than America.

As the anti-Jewish rhetoric and violence of the Trump era has shown, that’s changing. Governed by a president who regularly makes racist statements about Jews to the press and on Twitter, the United States feels a lot more like pre-war Europe than it does the America we once knew.

Since the October 2018 attack on Pittsburgh’s Tree of Life synagogue, in which 11 Jews were killed by a white supremacist, the body count of the last year alone has eclipsed those of Muslim extremists in France since the end of the Cold War. In particular that associated with Mohamed Merah and Charlie Hebdo.

That the US would find itself worse off than today’s Europe, in regards to Jewish safety, stands contrary to reason. How could a country in which Jews are so much a part of the national fabric double down on its own like that? Was it really that easy?

The answer is yes. The hatred has been building for years. But, unlike 20th century Europe, the incubator was Evangelical Christianity, not fascism. Since the 1960s, no force in American life has nurtured resentment of difference and diversity more than the country’s Protestant churches.

Mining white, working-class Americans’ growing sense of inequality, Evangelicalism made them feel privileged again. Not just by reiterating the expected bromides about the imminent return of Christ and a killer afterlife, but by convincing Christians that their faith sets them apart, and makes them superior, as though they are part of a new class.

That they aren’t, of course, helps keep them angry and going back to worship services seeking redress. But that’s the point. Church became a place where Americans could be frustrated, together.

The idea that religion could be repurposed like this was not unique. Taking their cue from the black churches of the 1950s and their leadership of the Civil Rights Movement, Protestant fundamentalists put themselves forth as the majoritarian response, in deceptively complex, white identity politics clothing.

The racial aspect was always evident but didn’t come fully to the fore until the mid-1990s, following the Oklahoma City Bombing, when militia movements surfaced throughout the United States, following the election of Bill Clinton.

Offering a mix of Protestant spirituality and white supremacy, far-right religious currents prioritising race, such as Dominionism on the one hand, and Christian Identity, on the other, had become increasingly influential. Neo-Nazis and Evangelicals were closer than ever before, in a uniquely American mix.

Instead of focusing on abortion and women’s rights, and homosexuality, these movements espoused avowedly anti-democratic, racist attitudes analogous to those of fascists and the Ku Klux Klan.

Diversity was at the top of their hit list, and Jews were their most hated of enemies. But, unlike Hitler’s National Socialists, they espoused a libertarian hostility to big government and affection for the free market.

It all made sense. Conservative politics had been radicalised by successive Republican administrations, starting with Ronald Reagan, since 1980. Openly hostile to the separation of church and state, and an avowed anti-communist, Reagan had opened the floodgates and made certain kinds of political transgressions possible in ways that aren’t sufficiently appreciated.

On a superficial level, Ronald Reagan made Americans feel that a return to the 1950s was doable, when in fact, what was being envisioned was something more like A Handmaid’s Tale. It was just a question of how to get there. Nobody anticipated what kind of changes this would trigger, ideologically, and lead to Steve Bannon and Richard Spencer.

The intervening Clinton and Obama years, gays in the military campaigns and declarations of a post-racial America, were just a sideshow. The human rights abuses committed under the Bush Administration, as part of its War on Terror, and the hysteria of the Tea Party movement pointed to changes far more profound taking place in American politics.

If Europeans want to understand the ideological mix out of which Trump and his white nationalist base emerge, this is it. Populism, it’s not.

For anyone who understands the history of the US right and its political transformation since the Cold War, all of this is obvious. The question is why it received such broad buy-in from Americans.

Many analysts rightly point out the public’s acceptance of neoliberalism and the pro-market policies common to both the Democrats and the Republican Party. In matters concerning Antisemitism, however, it’s something different.

It has to do with the cultural consequences of the last two decades of being at war in the Middle East. Insufficient attention has been paid to how the so-called Clash of Civilizations has played out on a religious level. That the conflict, between Americans and Arabs, is also one of Christianity and Islam and, ultimately, Jews.

To imagine that the hundreds of thousands of American military personnel who have served in the Levant since 2003 have not rationalised the war, on the basis of their faith, is ludicrous.

Just look at the profound Islamophobia that afflicts American society, in which Muslims play nearly no visible role, for a start. The invective directed at Democratic Representatives Rashida Tlaib and Ilham Omar is a good example. It would be the same even if Israel were not a part of their controversy.

Such prejudice did not exist, in any significant way, before 9/11. Its growth and deepening since those years is a product of the conflict and the religious currents that came of age in the United States, during the 1990s.

To imagine that this has no repercussions for other minorities in the United States is equally shortsighted.

As President Trump has repeatedly stressed throughout his time in office, Jews have secondary citizenships. They are foreigners, from the Middle East, as much as they are Americans. Even though American Jews are mostly of Central and Eastern European descent and not Sephardic or Mizrahi Jews, from Mediterranean and Arab countries.

In making such statements, Trump is not only declaring American Jews outsiders but, also demonstrating the dependency of his Antisemitism on Islamophobia.

Jews are bad because they come from the same place as Muslims. It may not be a very elegant equation, but one of the reasons the president is as popular as he is is because he thinks a lot like his followers. This is how he is heard. And it’s intended.

The question, for a journalist like me, is what will the future of Jews in the United States bring. At present, it feels like they’re undergoing a process of de-integration.

Whether it’s Trump attorney Rudolf Giuliani explaining that he’s a better Jew than George Soros, on American TV, or the president telling AIPAC that Benjamin Netanyahu is their real leader, Jews are being marginalised and killed as a consequence. And the government is responsible.

If I were Jeffrey Goldberg’s editor, I would encourage him to rewrite his 2015 article, with the headline “Is It Time for the Jews to Leave America?”

I’d request that he not encourage an abandoning of the ship. Not even by implication, for Israel.

The problem, after all, is that if we give up one place, we give up them all. It’s not, in the end, where Jews live. It’s about whether we have a right to exist anywhere, at all.

Photograph courtesy of The All Night Images. Published under a Creative Commons license.

Above the entrance of Bracken House, sits the face of Winston Churchill, set in a gold sunburst on an astrological clock. END_OF_DOCUMENT_TOKEN_TO_BE_REPLACED

Following a welcome ceremony on the evening of our arrival, the 27th annual Farkah Festival began. END_OF_DOCUMENT_TOKEN_TO_BE_REPLACED