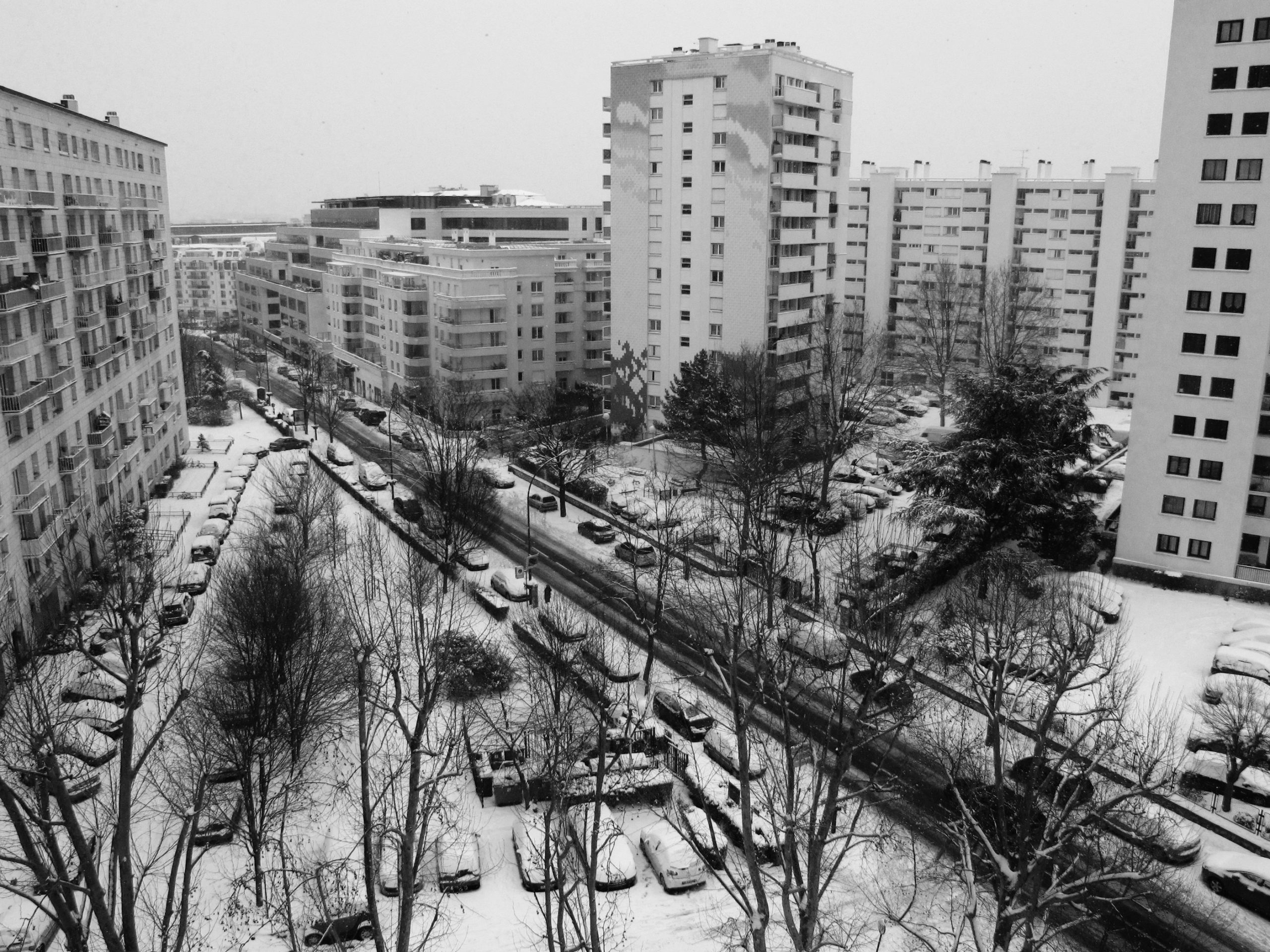 It's about being frozen. Suburban Paris, from the train.

And if you rarely listen to rap by choice, they may well win you over, since the Montreuil via Sanguee band do a wonderful job of providing the most accessible pleasures of the form while avoiding the abrasiveness that alienates casual listeners.

But if you fall somewhere in between those two extremes, things become more complicated.

After all, this is banlieue noir, to cite the Sugar MFFK track. It’s about being underclass, and the small joys afforded those who live out their lives on the margins.

The music’s languid pace, and hushed narration, are as much about ennui as they are about being stoned. The fishbowl-like feeling you get from it is like saying you’re stuck in a very small space, but doing everything you can to keep moving.

The sound is all it’s own and easily understood in light of its origins. But it also has antecedents, which help mark whence this version of rap artistically descends from.

Indeed, it has never been easier to learn about popular music. That’s part of what makes TripleGo so interesting for rap fans.

Whether you want to trace vertical connections, revealing how the past manifests itself in the present, or horizontal ones, showing how and why different subgenres and artists inform each other, the capacity to construct webs of meaning is unprecedented.

Yet this surfeit of possibility has somehow made music harder to love. Especially long-running, socially meaningful idioms like rap.

Intellectual impulses threaten to marginalise the importance of visceral response. The simple act of listening turns into a sterile exercise in situating music in time and space.

TripleGo manages to arrest that tendency, as much as they invite it.

Although the band sings in French and subtly incorporates musical details that derive from their North African origins, TripleGo’s indebtedness to artists in the US and UK is obvious throughout their records.

Fusing the approach to rhythm pioneered by Atlanta and Houston producers in the 1990s, which came to be called trap, with the penchant for spacious atmospherics identified with the after-life of primarily British genres like jungle, TripleGo manage to create a remarkably coherent sound.

Yeux Rouge in particular – the title is a nod to stoner culture – vehemently repudiates the idea that the album qua album is dead.

While individual tracks can be excerpted effectively, they all benefit from being integrated into a larger whole. But there are times when this cohesiveness can feel like a liability.

Because TripleGo is so adept at creating music that fades seamlessly into the background at lower volumes, it sometimes gives the impression of taking the avoidance of conflict too far.

But, the political metaphor is obvious, too. They want to go about their business, without being noticed. Ironically, that’s what makes TripleGo so noticeable.

While if the lyrics manage to transmit a diffuse multiculturalism, with some pointed political insights, the manner in which they are delivered suggests that listeners need not heed them too carefully.

For a person who was brought up believing that the point of rap is to push buttons, the fact that Yeux Rouge periodically sounds like the soundtrack for a high-end car commercial can be disconcerting.

Even when the duo pushes the beat forward, as in the opening bars of Ralenti, that sense of purpose is soon undermined by the same smooth background synths that appear elsewhere on the album.

Interestingly, this muted quality is shared by a number of prominent young rappers, such as the tragically murdered young Florida artist XXXtentacion.

Maybe we should try to temporarily bracket the compulsion to classify and focus instead on what TripleGo seem to value most themselves, a kind of outlaw tastefulness that stands in sharp contrast to both the exuberance of OutKast and the self-consciously cluttered aesthetic of Burial.

In the world of fashion, as it is actually worn, out in the real world, the primary concern is not how original a garment is, but how good it looks. TripleGo ask whether the same might be true of music.

Krzysztof Kieślowski’s 1976 film The Scar, which chronicles the construction and operation of a large chemical factory, breaks many of the rules that had governed narrative cinema since the silent era. END_OF_DOCUMENT_TOKEN_TO_BE_REPLACED

The Russian government is awarding prizes to Macedonian writers. END_OF_DOCUMENT_TOKEN_TO_BE_REPLACED

The 1970s was a decade of broken dreams. The end of the postwar boom brought to a close the era of middle-class liberalism in Europe and North America. END_OF_DOCUMENT_TOKEN_TO_BE_REPLACED