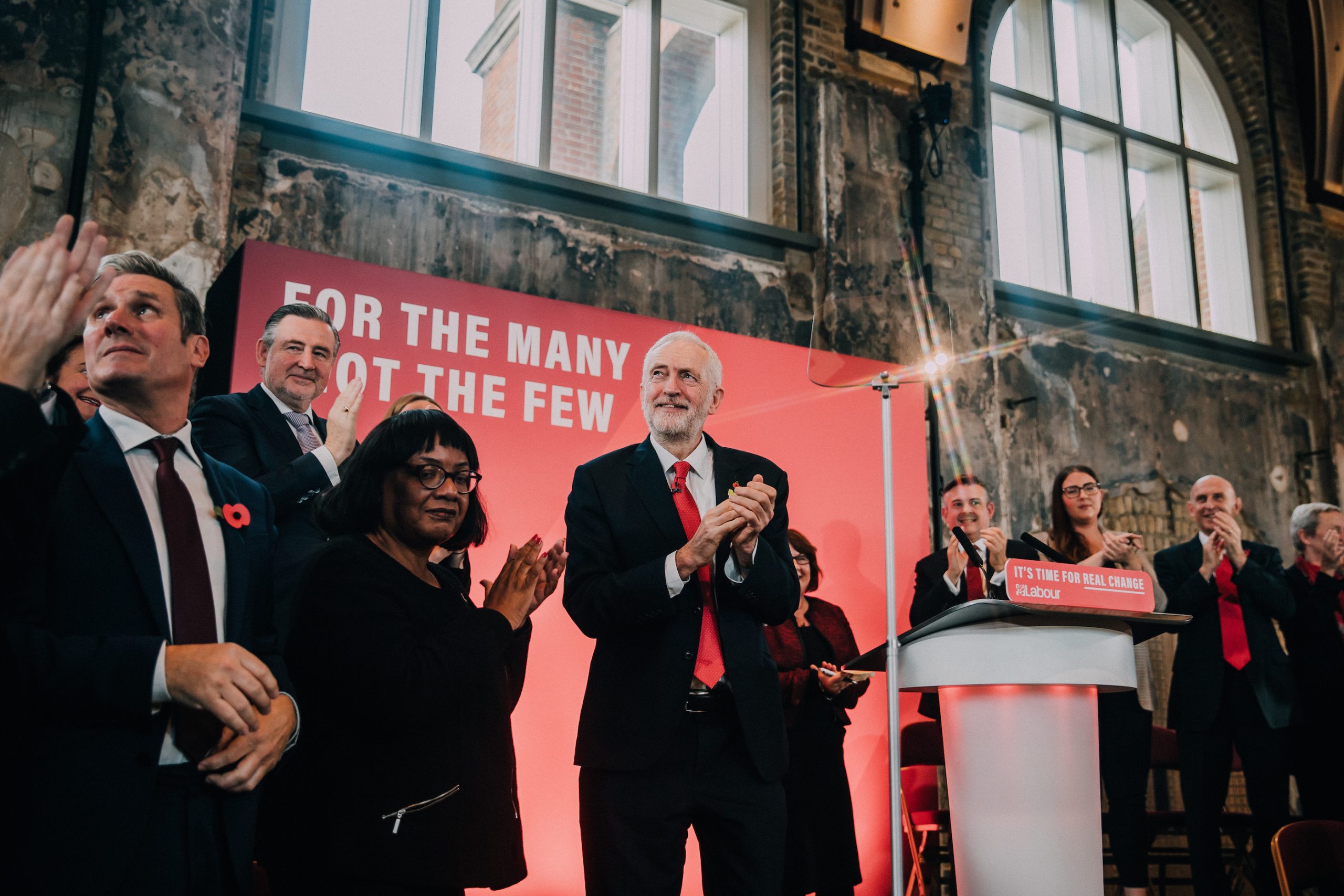 Before the deluge. Keir Starmer (L) with Jeremy Corbyn, October 2019.

We’ve all heard this argument, but what’s wrong with it? Well, the Labour Party can’t improve the lives of most British people if it gives up every commitment to doing so – even if that’s in exchange for holding high office.

Once the official opposition signs up to every terrible policy the government of the day has enacted, the possibility of change is foreclosed. The option for real change no longer exists. So many people will wonder why they should vote at all. They’re not wrong either.

Furthermore, the so-called centre is not a static position on the political landscape. It shifts with the times and often it’s shaped by the dominant faction in politics. This means what was once extreme in the 1960s and 1970s is now common sense today.

The irony is the people who talk about the centre-ground are more likely to be ‘uncompromising’ Remainers than pragmatists. Somehow the idea that the centre might be redefined around disaster nationalism has entered their minds.

There are many wrong turns a political party can take after losing an election. The worst thing you can do is go into retreat, accept your enemy’s terms and gradually give up every principle anyone ever admired you for. We have to fight if we want to change the consensus. Anything else is surrender.

Yet this is exactly what the centrists want the Labour Party to do. We can’t get back into power unless we win over Tory voters, thus we must give up on socialist ideas and even mildly social democratic policies. This is a recipe for disaster in the new era of politics.

There are only two Labour leaders who won 40% or more of the popular vote in elections since 1979: Jeremy Corbyn and Tony Blair. Labour came very close to winning in 2017 on the back of a left-wing manifesto. The party saw the biggest vote swing since 1945.

Unfortunately, the 2017 election will be edited out of history. Instead, the 2019 defeat will be taken to confirm that the socialist left cannot win and class politics is a dead-end in Britain. It will be taken by many as evidence that Labour went ‘too hard-left’.

It’s no coincidence that the liberal centre-left and the Labour right are coalescing around Keir Starmer after the 2019 election. Meanwhile, some pro-European socialists are supporting Starmer too after his performance on Brexit.

This crowd hopes Keir Starmer will be able to win the argument with the right. However, the results could set back Labour for another decade. Nevertheless, the power of New Labour nostalgia is strong with extreme centrists.

History ended in 1991, as Francis Fukuyama wrongly claimed. Politics ended in 1997 if we believe the Blairites. All that’s left is the post-political, post-historical vaudeville. So let’s just re-enact 1997, again and again. Things can only get better.

Back in reality, Pasokification is a very real phenomenon. Everywhere in Europe, social democratic parties are in terminal decline – Germany, France, Greece, Italy and the UK. The exceptions are Portugal and Spain, where we find the centre-left is working in league with more far-left parties.

The Portuguese Socialists are working with the Left Bloc and the Communists, whereas the Spanish Socialist Party has joined forces with Podemos. This isn’t the only option out there. The Danish Social Democrats have forged an at times rightist path, which combines anti-immigration and centre-left policies.

The British Labour Party may face two choices. Either the party can continue on the path towards democratisation or it can hold onto its Tammany Hall-style of doing business and chart a less radical course with an emphasis on strong borders.

Another path would be to oppose open selections, support centre-left policies and avoid appeals to nationalism. This might be the Starmer option, but it’s hard to see how it can strike back against the right since the Conservatives now have a stranglehold on Parliament.

The future does not look good for moderate, mild liberal progressivism. Unfortunately, the lack of democracy in the Labour Party makes a pivot to the centre almost inevitable. What kind of centre is another matter.

It’s not clear what Keir Starmer will do if and when he wins. The former human rights lawyer could turn out to be a rather apolitical liberal with nice qualities. He might be willing to work with all factions of the party and work harder on media and communications strategy (an area where Corbyn was seriously lacking).

Of course, the stereotypical centrist dads hope Starmer will herald a return to the era of good sense, moderation and compromise, just not on Brexit or right-wing economics. It will be hard for him to make such a contradictory platform coherent.

The Labour right will want to re-enact the Third Way politics of the 1990s. However, this is no longer the centre-ground and the social forces behind this shift are all on the populist right now. Strong borders and nativism may redefine the kinds of compromises the centrists of tomorrow will make.

This is why the Third Way is neither a viable path nor a desirable alternative. The balance of forces in UK politics has shifted and a new paradigm is developing. It’s not going to be enough to compromise with it, but nor is it easy to slam on the brakes and hit reverse on Brexit.

Whatever the Third Way was in 1997 or 2007, the centre is not that today. The assumptions we had about politics for more than 25 years collapsed in 2016, broken apart by years of stasis. A whole epoch has ended, but what comes next is still taking shape before our eyes.

There are stark choices ahead of us. If we can’t find a way to mainstream left politics and challenge the status quo, the future will be far worse than anything we’ve seen so far. History is far from over. The same goes for politics.

As a Labour Party member, I refuse to be blackmailed into voting for Keir Starmer by a bunch of neoliberal whingebags who spent the last 5 years deliberately undermining Jeremy Corbyn. They can go swivel.

Brexit will turn three on the last day of January, over six years since the 2016 referendum kickstarted Britain’s race to the bottom. END_OF_DOCUMENT_TOKEN_TO_BE_REPLACED

Be careful what you wish for. It may be a cliché, but it’s one the Greens are learning all over again. END_OF_DOCUMENT_TOKEN_TO_BE_REPLACED

Before his arrest, Andrew Tate was just another influencer with bad politics. END_OF_DOCUMENT_TOKEN_TO_BE_REPLACED