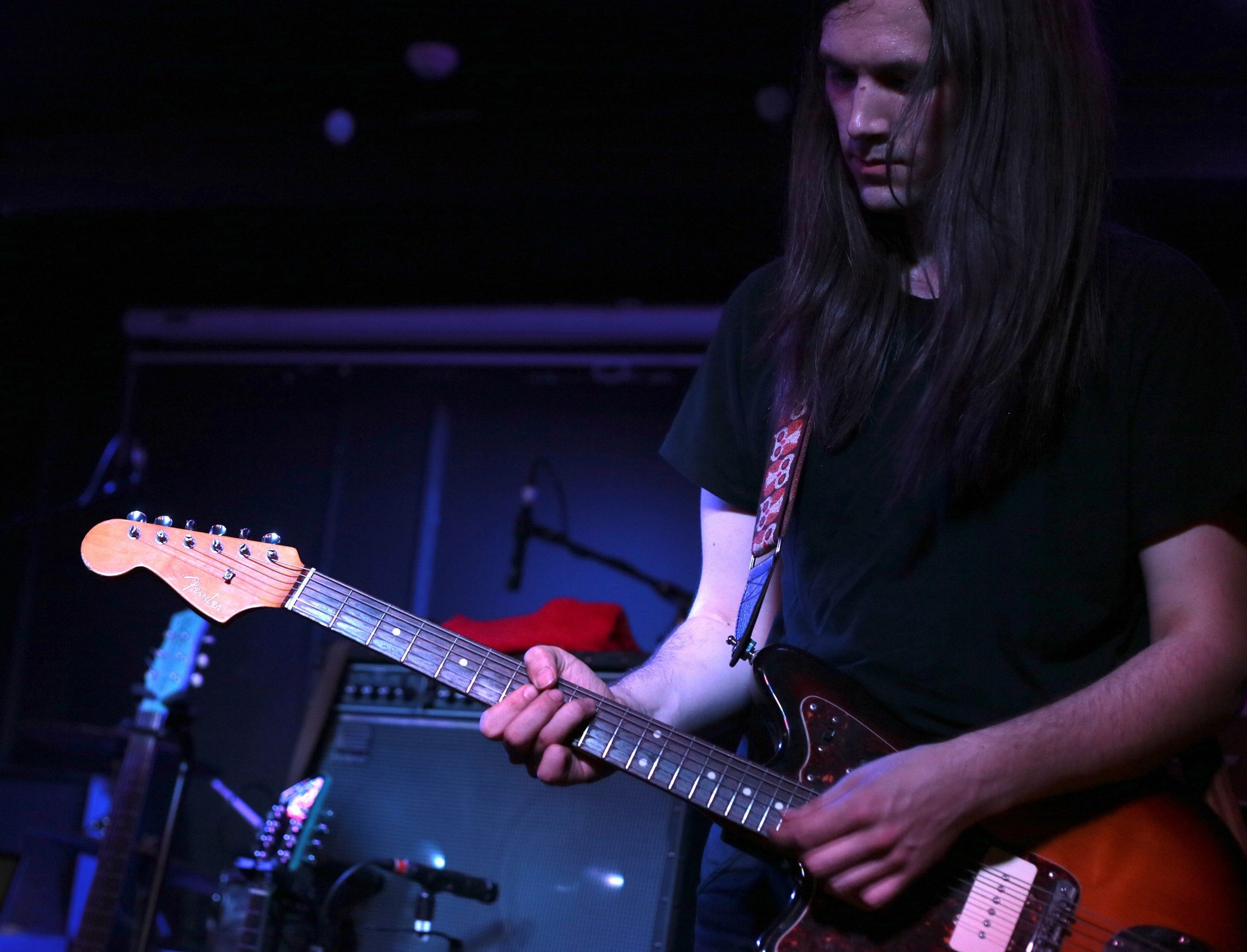 No matter how many accolades the band have received since their 1977 debut Pink Flag – and how deftly they have sidestepped the dreaded label of has-been – many of the people inclined to give Mind Hive a try will want to know what sets it apart from Wire’s frequent releases of the past decade or so, not to mention the band’s celebrated early “trilogy” of Pink Flag, Chairs Missing, and 154.

As that first song “Be Like Them” continues, the problem of novelty becomes more acute. Decrying a world in which “hungry cats” get “fatter minds and thinner ideas” and history is reduced to “rabid dogs tearing skeletons into piles of bones” it provides a bracing vision of societal collapse, yet one out of sync with the dominant dystopias of today, which foreground either computer technology or climate change.

When we get to the lines that explain the song’s title, the diffuse nature of its critique is confirmed: “They play it all for you/They explain it all to you/Telling you to be like them.” Wire take it for granted that we can fill in the blank created by this pronoun. But the presumption that we should know how to identify who “they” are — or, more distressingly, not even feel the need to do so — gives the lyrics a dated feel.

To be fair, the second track “Cactused” makes it clear that the band means to be writing about the present, opening with lines that scream 2020: “The collective hive-mind/Algorithmically scanning/Defending exploration/And language hair extensions.”

The album also closes with “Humming”, which clearly refers to a post-Cold War reality: “Spy the Russians/Brushing scandals/Under oligarchy rugs.” For the most part, though, the lyrics on Mind Hive replicate the rather dated mode of abstraction on “Be Like Them”.

This is the language of post-WWII cultural criticism, which saw itself waging a desperate battle against a willingness to conform. From the Frankfurt School to Michel Foucault, concern for this “hive mind” and the role mass culture was playing in its perpetuation frequently took precedence over the Left’s historical preoccupation with class.

This perspective was informed both by the experience of totalitarianism, in both its communist and fascist implementations, and by the perception that most people in the supposedly free societies of the West were perfectly happy to be transformed into docile consumers. It cut both ways, in other words, making this line of argument attractive to rebels and outsiders of all sorts.

Despite the aesthetic break that first-generation punk rock, epitomized by the Sex Pistols, appeared to represent in the mid-1970s, the political impulses that accompanied it were largely elaborations on the work of buttoned-down scholars with the good taste of the haute bourgeoisie. While the artists and fans who self-identified as punks did not necessarily perceive this connection, it’s not difficult for someone with a knowledge of higher education in Great Britain during this period to discern.

As Simon Frith and Howard Horne’s groundbreaking 1987 book Art Into Pop convincingly demonstrates, the vast majority of British rock musicians in the 1960s and 1970s either had attended a post-secondary art school themselves or spent significant time with friends who had.

Although most of the individuals who taught and administered at these institutions were sincere about their educational mission, their intellectual labour helped to redirect the focus of talented working-class and lower-middle-class young people away from traditional political activism and towards cultural pursuits imbued with the aura of politics by other means.

The artists identified with the punk movement – sometimes against their will, as was largely the case for Wire – repudiated the excesses of what would eventually come to be known as classic rock. When it came to the way they conceptualized their place in society, however, they were still waging the same battle against conformity as their predecessors from the late 1960s and early 1970s.

All that had changed was the target for their adamant non-conformity. It wasn’t just the staid businessmen of the 1950s and early 1960s in their grey-flannel suits they were battling, but the swinging sort that had frolicked on Carnaby Street during the Summer of Love and the long-haired impresarios, like Virgin’s Richard Branson, who followed in their wake.

The third-person plural in Wire’s “Be Like Them” is capacious enough to include all of these representatives of the status quo. Yet it’s worth asking whether it also makes sufficient room for the people who most threaten our liberty today, such as the authoritarian populists ascendant throughout the developed world or the billionaire CEOs who sell us convenience and security at the expense of our right to technological self-determination.

Wire presents us with the spectre of a “collective hive-mind” without providing a clear picture of whom or what its worker bees are serving. Is the band informing us of dangers that are no longer so pertinent? Or does it want us to perceive continuities between the postwar world in which they grew up and the problems that confront us today? Listening to Mind Hive over and over does not make it any easier to answer these questions.

Wire has always made the kind of music that resists easy categorisation. As founding band members Bruce Gilbert and Graham Lewis explained to Jon Savage during his research for England’s Dreaming: Anarchy, Sex Pistols, Punk Rock, and Beyond, they were already becoming disenchanted with the scene that coalesced around punk before their debut Pink Flag was released and immediately set out to move beyond its limitations.

Discussing the song “I Am the Fly” from their 1978 follow-up Chairs Missing, Lewis noted that, it communicated their realization that punk was already becoming a historical artifact. “It had finished. Some of the imagery in it was about these previously anarchic characters who had become the shop-window fodder for very large corporations”.

Asked by Aquarium Drunkard to reflect on the expanded reissue of those albums, along with 1979’s 154, band member Colin Newman remarked that, “it does your head in. . . It’s a very strange, slightly surreal experience. I think we’ve always very much lived in the present. It’s about what’s going on right now with the band and always has been. In that respect, it isn’t any different than how it was in 1977”.

This is precisely the attitude artists should maintain in order to ward off a decline in quality and helps to explain why Wire has never released the sort of resting-on-their-laurels record that even the greatest musicians tend to release once they reach middle age.

But it also exposes, if unwittingly, the problem that their consistency and longevity poses. Because declaring that “it isn’t any different than how it was in 1977” suggests that, for all of their reluctance to live in the past, Wire struggles to imagine a future that isn’t more of the same. That opening line “It’s nothing new” dares us to inquire not only whether the world needed another Wire album, but whether the world still needs the band itself.

Ever since 2008’s Object 47, Wire has been releasing records that synthesize different aspects of the band’s previous work. Their eponymous 2015 release, 2016’s Nocturnal Koreans, and 2017’s Silver/Lead all do an admirable job of making the band’s back catalogue seem cohesive, both musically and lyrically.

These albums would be hard acts to follow for an up-and-coming band, much less one whose members are nearing retirement age. Yet Mind Hive manages to hold its own, somehow making an even more pure distillation of the Wire aesthetic.

The more you listen to this excellent new album, the more you realize that it is an exercise in repeating and refining, not something new, but something more than four decades old, a sensibility born of the mid-1970s that Wire is either unwilling or unable to surrender.

In short, Mind Hive makes Wire vulnerable to millennials’ favourite put-down, one that has been playing an increasingly prominent role in contemporary politics: “OK, Boomer.” Nevertheless, there is a reason why Bernie Sanders has captivated young Americans despite being older than a Baby Boomer and why thousands of students clamour to take Noam Chomsky’s courses despite the fact that he will soon turn 92.

What frustrates Millennials and members of Generation Z most about the post-war generation is that its members are so self-righteous about their own superiority, failing to recognize that their youthful pursuit of adventure was more a function of historical privilege than a testament to free-thinking and bravery.

Mind Hive may find Wire trapped within a recursive loop of their own devising, in which the promise of early 1977 is perpetually giving way to the disappointments that soon followed. But the willingness they have demonstrated to keep journeying back through their own catalogue makes them uniquely qualified to discern historical continuities that the breathless futurologists of the iPhone era refuse to acknowledge.

The reason is clear. No matter how dramatically successive waves of technological progress have changed everyday life on the surface, the underlying structures that determine our financial security and political stability can still be traced back to the same backlash against the 1960s that first-generation punk signalled on a cultural level. We remain subject to the neoliberal mindset that first achieved significant traction during the OPEC oil crisis in 1973 and came to dominate first British, then American and German politics at the end of the decade.

Even seeing our world in terms of neoliberalism’s protracted dominance is myopic, however. The experience of totalitarianism that shaped post-World War II social critique revealed disturbing tendencies in modern society that are difficult for neoliberal thinking to comprehend. In this regard, the most troubling song on Mind Hive may also be the one best suited to help us perceive this longer durée clearly.

“Shadows” starts out with what initially seems like a Black Mirror scenario, in which “the people are sorted by gender and age”. Yet it soon becomes apparent that this operation can proceed without the help of computer technology: “The men are lined up/Then shot into graves/The children are murdered/The women enslaved.”

Although these lines communicate a profoundly twentieth-century horror, familiar from tales of the Holocaust and other examples of genocide, from Cambodia to Rwanda to Yugoslavia, there is no guarantee that it won’t happen again. Significantly, what passes for the chorus of the song warns us about the “shadow of the future” before reminding us of the “shadow of the past”.

Mind Hive would make a case for Wire’s continuing relevance purely on the basis of its musical excellence. At a time when music is more accessible than ever before and almost every new record feels like a pastiche of its creators’ influences, the fact that Wire sound more like Wire than ever is surely a good thing.

What makes the album more important than your typical excercise in nostalgia, however, is its complicated relationship with history. Mind Hive feels prescient precisely when it also seems to be most dated. It would be easy to pass off Wire’s songs from the late 1970s as brand new. And it’s not much harder to pretend that Mind Hive is decades old, despite the increase in production values. Wire’s lyrics, remarkably consistent in theme and style over the years, only reinforce the impression that they have always been out of step with their contemporaries. But whether they are drawing our attention to the “shadow of the future” or the shadow of the past”, the fact that we can still refer to the band in the present tense is reason to celebrate.

Krzysztof Kieślowski’s 1976 film The Scar, which chronicles the construction and operation of a large chemical factory, breaks many of the rules that had governed narrative cinema since the silent era. END_OF_DOCUMENT_TOKEN_TO_BE_REPLACED

The Russian government is awarding prizes to Macedonian writers. END_OF_DOCUMENT_TOKEN_TO_BE_REPLACED

The 1970s was a decade of broken dreams. The end of the postwar boom brought to a close the era of middle-class liberalism in Europe and North America. END_OF_DOCUMENT_TOKEN_TO_BE_REPLACED