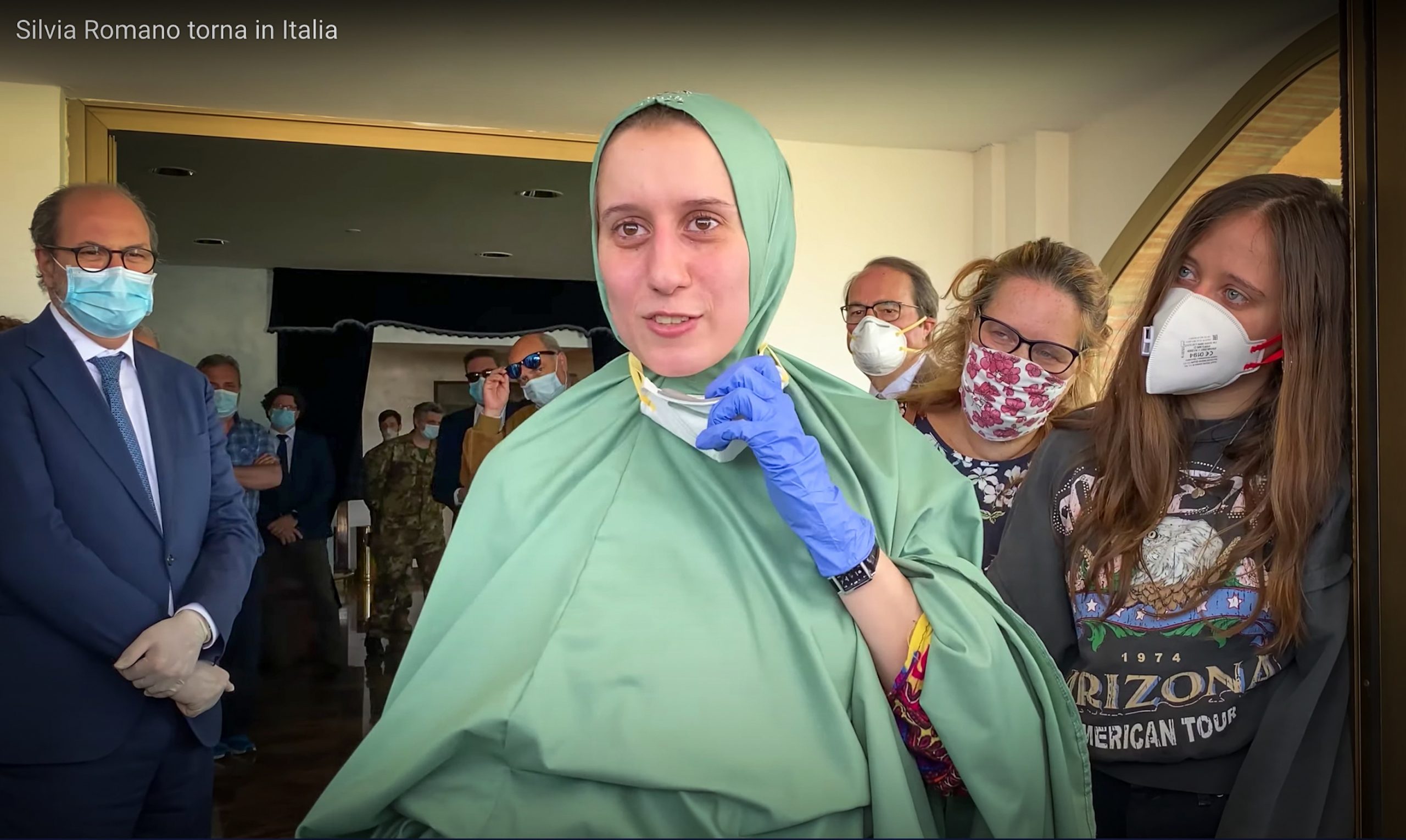 Muslims are foreigners, is the message. Adopting the faith is tantamount to treason.

For anyone following the story of kidnapped aid worker Aisha Romano (née Silvia), the storm of abuse that greeted her return to Italy on 10 May was overwhelmed with such ideas.

Whilst held by the Islamist al-Shabab militia in Somalia for 18 months, Romano had converted to Islam. Accordingly, she renamed herself  “Aisha”, which means “she who lives” or “womanly”.

The name originated with the Prophet Mohammed’s third (and youngest) wife, Aisha bint Abu Bakr (Aisha, daughter of Abu Bakr), the daughter of the first caliph to succeed Mohammed.

Aisha is an obvious choice for a convert. It’s a statement of piety, of identification with Islam. In becoming a Muslim, she’d gotten hitched to Mohammed. Metaphorically speaking, to be precise.

But, for as common as such a given name is in Arabic  – think Sarah or Jacob, if you’re Jewish – Aisha is a standout pejorative for Europe’s racist far-right.

One of its most frequent criticisms of Islam is that it sanctions paedophilia because Mohammed married the girl when she was nine (some say as young as six). Since the prophet did it, all Muslims do.

Of course, that was the 6th century. The Old Testament is replete with conventions like stoning that get excused for their era. But, for right-wing extremists, when it comes to Islam, there is only now.

Few lines of attack remain as common as the molestation charge. In 2018, for example, the European Court of Human Rights upheld up the conviction of an Austrian woman for calling Mohammed a paedophile.

The Austrian had been convicted for teaching two seminars, bearing the title “Basic Information on Islam,” in which she called the prophet’s marriage to Aisha paedophilic.

So, to return to Italy a Muslim, after being held captive by African Islamists, sporting the name of a pin-up for racists, could not help but frame Romano as an apostate.

Particularly given the intensely chauvinistic politics of the Italian right, which often betray a bookish familiarity with fascist and, more recently, identitarian ideas.

Hence, the severity and the relentlessness of the attacks on the former aid worker, by Italian politicians and journalists. It almost feels choreographed, like it was an agency campaign.

Thankfully, not every Italian equates Islam with criminality like that. But, for the estimated 41% of Italians surveyed who express some degree of discomfort with Muslims, such statements resonate.

The attacks weren’t always that blunt. But even in their more composed formulations, they were astonishingly personal, delivering every insult imaginable.

True to form, the front page of the right-wing newspaper Il Giornale ran with the headline “Islamic and happy. Silvia the ungrateful,” on 11 May.

Leave it to the tabloid’s director, Alessandro Sallusti, to explain why Romano is a traitor.

“Silvia is back, but it was like seeing a concentration camp prisoner proudly dressed as a Nazi. I don’t understand, I will never understand,” Sallusti tweeted the night before.

The Il Giornale chief, of course, sounded like he was overcompensating in a game of one-upmanship with his anti-Semitic jibe. Romano was a modern kapo, a prisoner who worked for the SS.

Sure enough, the director of Italy’s other hard-right paper, Libero, had beat him to the punch a few hours earlier, claiming that the government had paid off al-Shabab for Romano’s return.

“Paying the ransom for Silvia means financing Islamic terrorists. Who are friends of the girl who became Muslim,” Vittorio Feltri wrote on Twitter.

“If one converts to Islam I don’t care, but I don’t want to applaud her. It annoys me a bit if the state spends a few million of the Italians to bring it back to Italy,” Feltri added.

The latter tweet is especially revealing. On the one hand, it pretends to be neutral on Islam. On the other, Feltri claims the government is promoting the religion, by returning Romano to Italy.

The facts of the matter, predictably, are very different. The Italian government just brought Aisha Romano home. But because she converted to Islam, Italian conservatives found it an ideal opportunity to put itself back in the spotlight, after months of being ignored due to the Coronavirus crisis.

What better a target to focus the frustrations that have built up over the last few months, due to the pandemic, than a young woman who had just spent the last year and a half of her life imprisoned.

It would be more difficult to imagine the same abuse being visited on, for example, an Italian male, had he undergone the same experience. The gendered aspect of Romano’s mistreatment is unmistakable.

After all, for the far-right, women make easier targets than men. They’re more susceptible to corrupting influences. Since women can’t think for themselves, they’re easily duped by enemies of the state – and their religion stand-ins.

Without a doubt, a substantial reservoir of racism has been built up in Italy over the years, partially a consequence of the country’s economic stagnation the last two decades. Scapegoating is always easier, women included.

Whenever an event like this takes place, though, it becomes all too easy to overlook the significance of the alleged triggers. That is, in this case, the affinity that Italians might have for other cultures and religions, like Islam.

Indeed, Aisha Romano does not exist in a vacuum. There are thousands of Italians in Africa and the Middle East, working for aid organisations like Africa Milele Onlus, the Italian charity that employed Romano.

By spending time in the region, they learn about the cultures and traditions, and many come to identify with them.

I can’t tell you how many Italian journalists and relief workers I’ve met over the years, in Israel, as well as in Europe, who speak fluent Arabic, and who spent years living in countries like Egypt and Jordan, working for the United Nations and news organisations.

Some of them come even back to Europe with religion. Aisha Romano is not all that unique in this regard.

Most importantly, Italy is home to at least 2 million Muslims, many of whom come from the MENA region. It’s not unreasonable to imagine that Italians might find themselves attracted to Islam, for purely personal reasons, which can only be construed as local, not foreign.

For a religion that is subscribed to by nearly 2 billion worldwide, it’s not unreasonable that like Italy’s most popular religion, Catholicism, it would find roots in the country.

That Muslims have lived in Italy since the 8th century, of course, is conveniently overlooked by the racist rhetoric of newspapers like Il Giornale.

But, racism is like that. It’s about narcissism. When you can only see yourself, anyone who obscures your vision is an intruder.

Brexit will turn three on the last day of January, over six years since the 2016 referendum kickstarted Britain’s race to the bottom. END_OF_DOCUMENT_TOKEN_TO_BE_REPLACED

Be careful what you wish for. It may be a cliché, but it’s one the Greens are learning all over again. END_OF_DOCUMENT_TOKEN_TO_BE_REPLACED

Before his arrest, Andrew Tate was just another influencer with bad politics. END_OF_DOCUMENT_TOKEN_TO_BE_REPLACED