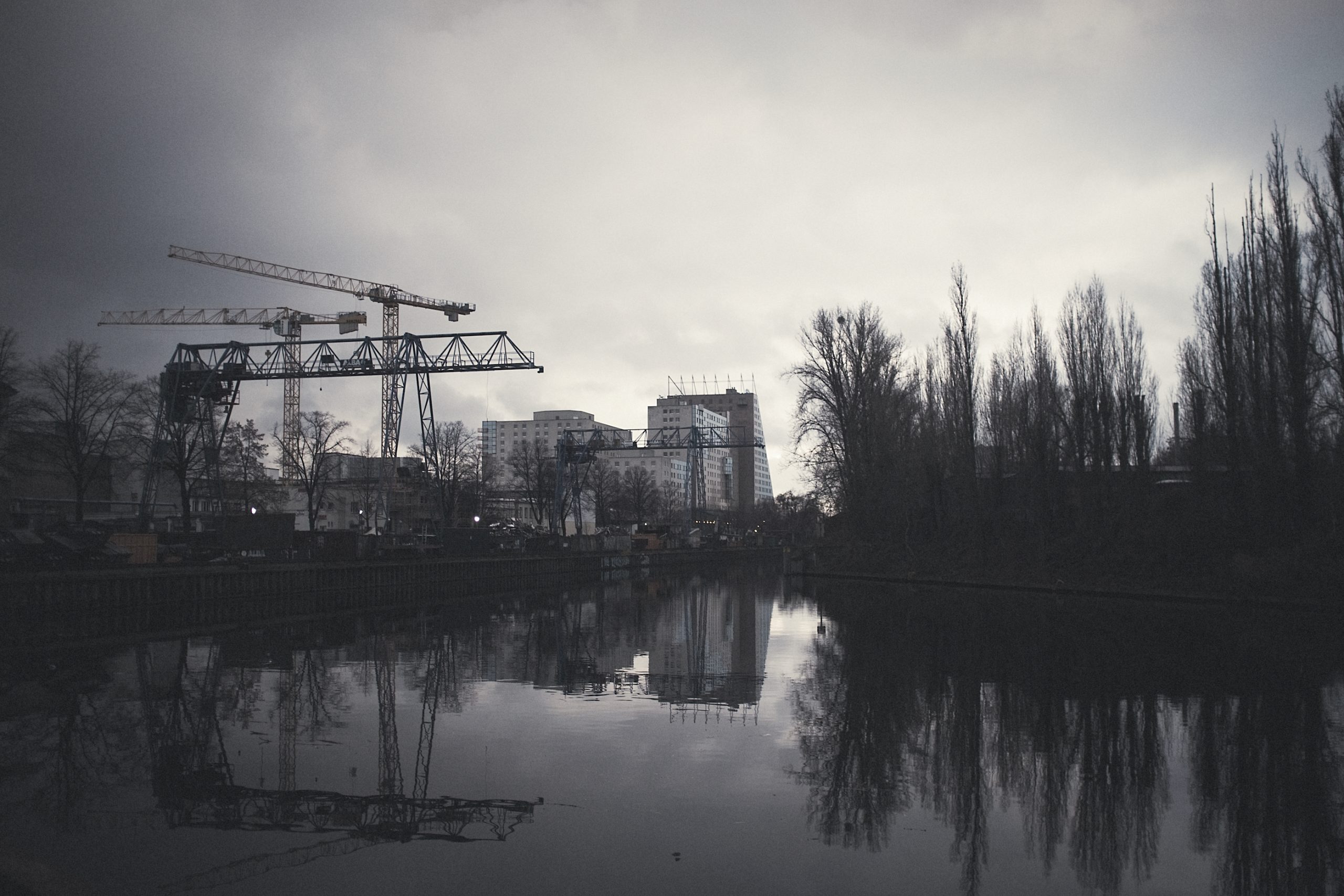 And then, fourteen seconds into the song comes an actual drum, followed by a thick bass line three seconds later. It’s not a long wait for the Berlin band that long ago outgrew its reputation as dangerous provocateurs. But it’s long enough to put us on alert: this is a record that will require a sense of history to understand fully.

Soon, a high-pitched voice, awkwardly clipped, repeats “Berlin, Berlin, Berlin” and then, a little later, “Es tut mir Leid”. Someone is sorry. And that sorrow is bound up with Germany’s strange capital city, which grew into a metropolis at the same time as American cities like New York, Chicago, and San Francisco but has felt out of context ever since.

Several of the tracks on Alles in Allem are explicitly named after significant locations in Berlin. “Wedding” refers to the district colloquially referred to as “Red Wedding” during the Weimar Republic, when it was a working-class district full of Communists, and which remained one of the city’s poorer and more multicultural districts long after reunification.

“Am Landwehrkanal” designates the shallow, human-made waterway separating Kreuzberg from Neukölln, where Rosa Luxemburg’s body was dumped and then discovered six months later.

“Grazer Damm” is a small neighbourhood centred on public housing for workers built under the Nazi Party in the late 1930s and now preserved for its historical interest.

“Tempelhof” refers to Berlin’s oldest airport, which was greatly expanded during that same period, witnessed the Berlin Airlift at the onset of the Cold War, and has recently become a park where people can fly kites and ride their bikes, as well as a refugee camp.

In other words, these locations are all loaded with significance, not only for the city’s inhabitants but anyone who cares about modern Germany’s darkest times and the strenuous efforts that were subsequently undertaken to overcome them.

Because Blixa Bargeld, Einstürzende Neubauten’s lyricist and lead singer, approaches his work with an explicitly radical, Dadaist sensibility, however, none of these songs provides a conventional history lesson. Rather, listeners must reconcile the connotations these places inspire with words that are perversely, poetically oblique.

“Am Landwehrkanal”, for example, invokes a first-person that has passed from plural to singular:

Bargeld’s lyrics describe a meeting a woman there, under cover of night, when they had “1000 ideas, and every one of them was good”. But she is gone now and he ruminates nostalgically on the loss.

Could he be referring to Rosa? Or is this instead a personal reminiscence rendered deliberately vague, thereby imbuing it with the weight of allegory?

“Wedding” has very few words besides the district’s name itself, repeated to the point of its becoming lime an incantation, in which we hear the word “Ding” within it.

Does the description of trudging home to this neighbourhood depict it during its leftist heyday between the wars or more recent times, when the people trudging were no longer the sort of Germans that many Germans recognized as Germans?

Given the fact that Bargeld regularly shifts into English, it is even plausible that the song symbolically “weds” those different generations of the working class.

Like the famous scene from Wim Wenders’ pre-reunification film Der Himmel über Berlin, in which an aged blind man reflects on the fact that the former Potsdamer Platz has been transformed into a no man’s land – a film that Bargeld performed in as a member of Nick Cave’s band The Bad Seeds – the final track on Alles in Allem, “Tempelhof”, muses on the transient quality of humankind’s achievements.

Where once stood one of the world’s biggest and most impressive structures, our attention is now drawn to the ways in which nature is slowly reclaiming the place:

The bays where the planes once waited are long since empty. But birds nest in their place. Where the night is flattest and full of doors, sage and summer savoury now grow. Like many of the lines in Alles in Allem, this would read like poetry in the absence of both music and the anti-music that Einstürzende Neubauten made their reputation by proffering.

It matters a great deal, however, that we are hearing these words in conjunction together with a range of sounds that resist the imposition of meaning. To be sure, when Einstürzende Neubauten’s once fearsome racket began to soften in the mid-1990s, Bargeld’s vocals – sometimes shouted, sometimes whispered, but rarely sung “straight” – became more and more important for their records’ overall effect.

Indeed, that may be one of the reasons why the remarkable percussionist F.M. Einheit, who used to break rocks during live performances, left the band: he did not want to be reduced to the avant-garde version of the piano accompanist in nineteenth-century Romantic Lieder.

As in the best work by Franz Schubert, Robert Schumann, and Johannes Brahms, though, the “trans-semantic” background sounds made by Bargeld and his fellow band members serve a double function. They complicate and frequently contradict the lyrics’ internal rhythm, drawing our attention to the struggle to express feelings in language.

They also remind us of the negative space that is forever threatening to consume that expression, the rests between percussive tones as pregnant with implication as the tones themselves.

On one level, the geographical specificity of Alles in Allem appears to directly refute the album’s title. We are not dealing with all of the world or even all of Germany, but Berlin alone.

Yet the role that Berlin has played in global affairs over the past century makes it perhaps singularly well suited for an exploration of the relationship between the universal and the particular, the vastness of interplanetary history – also touched upon in Der Himmel über Berlin — and the inexhaustible horrors of modern German history.

It is the play of sound and silence on the record that imbues Bargeld’s words with an allegorical resonance that cannot be reduced to any one interpretation. The album is both about Berlin and about everything. The songs named after places are both about the history of those places and about experiences that might just as well have happened anywhere else.

This ambiguity, in equal measure frustrating and satisfying, is perhaps best expressed in one of the album’s few songs that does not seem to be connected to a particular location in Berlin, “Seven Screws”. Like the final track “Tempelhof”, this song references the Book of Revelations and the seven seals that must be broken.

But the picture it presents of what follows this revelation is emphatically secular. Bargeld’s sings of one day removing the screws and creating a new self from the fragments that survive his disintegration.

Considering the themes that percolate throughout Alles in Allem, the implication is clear: the only way to make something better out of Berlin’s painful past – and the pain that spread around the world as a result – is to open our minds to the possibilities that our attachments make it impossible to see.

Walter Ruttmann’s 1927 film Berlin: Symphony of a Metropolis is strangely suited for these times, when traditional moviegoing is in perilous decline, providing a way to disentangle the art of cinema from that mode of consumption. END_OF_DOCUMENT_TOKEN_TO_BE_REPLACED

That the first song on Soulside’s new LP ends with a sample from a 1952 American civil defence film Duck and Cover, about a nuclear apocalypse, says it all. END_OF_DOCUMENT_TOKEN_TO_BE_REPLACED

Based on the flurry of academic titles about it over the last decade, punk has become as common to college curriculums as it is to the Top 40. Why this took so long is baffling. END_OF_DOCUMENT_TOKEN_TO_BE_REPLACED