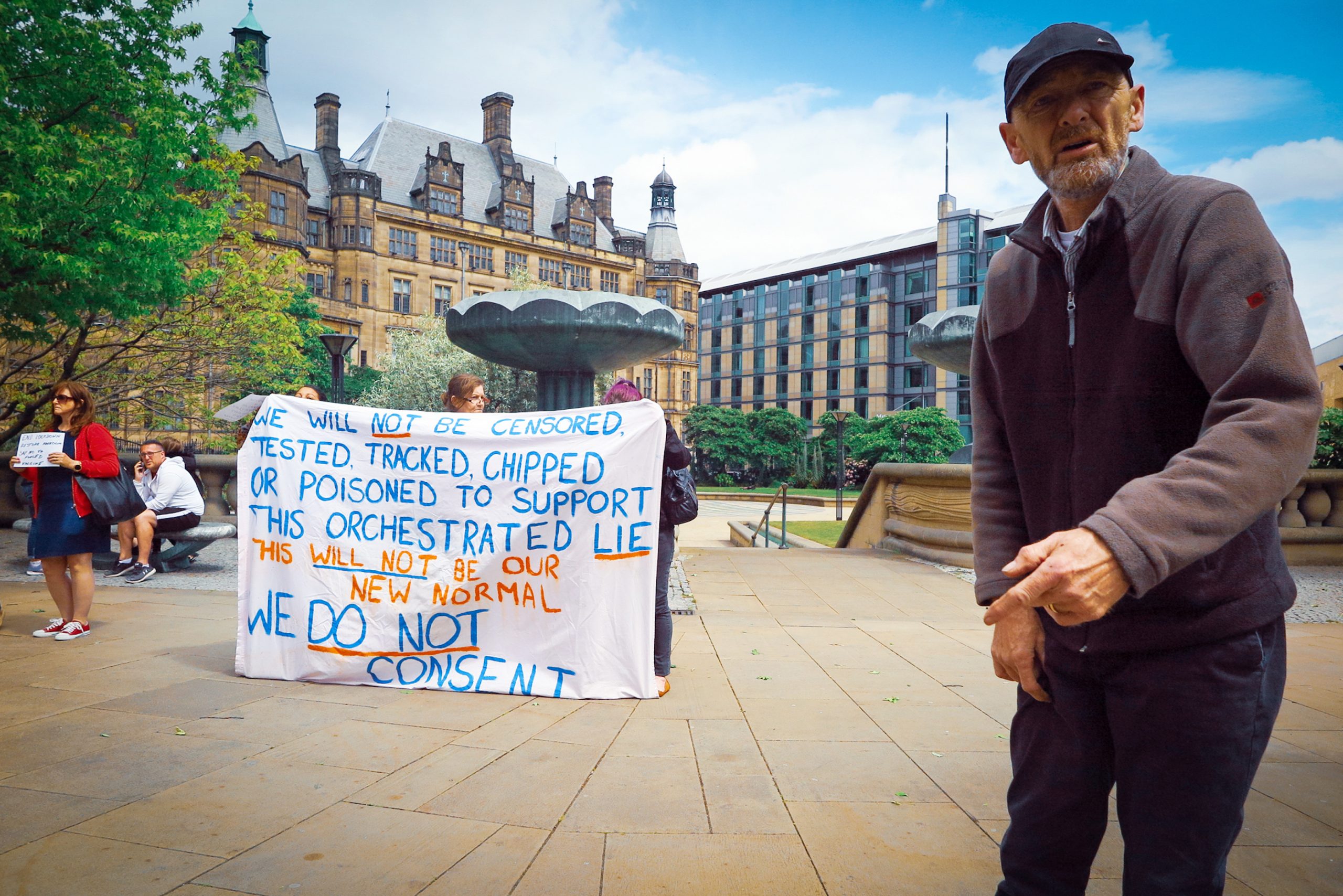 The paranoid style. Sheffield, May 2019.

There are dozens of such videos on the Internet.

The UK has seen almost 100 attacks on 5G masts in the last three months. The number of incidents peaked over the Easter weekend. It seems there’s nothing so glorious as an Easter egg hunt followed by trying to tear down the local tech infrastructure.

The reasons for torching a piece of new tech infrastructure could vary, but right now the main reason is to stop the spread of COVID-19. The 5G masts, also known as ‘towers’, are spreading dangerous electromagnetic waves all over the country, according to the conspiracists.

These dangerous waves spread coronavirus apparently. The conspiracists claim no country with 5G has had a major outbreak of COVID-19, except Iran would be one striking example where the virus has devastated a country with no 5G masts.

Meanwhile countries like South Korea – where the 5G network is already in place – have managed to contain and control the spread of the virus much more effectively than a country like the UK which is only just building up its 5G infrastructure.

Sadly, the role of conspiracy theories is not a matter of empirical inquiry. It’s about values and the object of the truth claim is the kind of society we inhabit and what it should be like. It’s no coincidence that conspiracy theorists are almost always very conservative people.

The conspiracy theory of history requires scapegoats, whether it’s the Rothschilds, the Illuminati, the Freemasons or even the Jesuits. The fear of an external agent interrupting the natural course of events is itself deeply conservative.

Apparently, the pandemic couldn’t have happened had it not been for China promoting 5G around the world. If the world just stayed the same, and if we could prevent outside forces from changing things, we would be fine. So conspiracy theories are about more than mass paranoia.

Why Not 5G Towers?

What’s different about COVID-19 is the plethora of conspiracies the virus has produced. The coronavirus outbreak has brought together the full range of weird and wonderful theories about geopolitics, space reptiles, radiation and new technologies.

American far-right shock jock Alex Jones argues that the 5G network undermines human immune systems. He has since been scolded by the New York authorities for hawking fake coronavirus cures.

David Icke, who claims The Protocols of the Elders of Zion is a “factual document”, is promoting his own version of the theory. He argues 5G infrastructure “poisons” human cells through electromagnetic fields.

It’s even on the money apparently. The new £20 note includes symbolism some believe resembles the popular images of the virus itself and a strange tower perhaps representing a 5G mast. This is a bit like how the Illuminati crowd love pointing out that the Eye of Providence is on the US dollar bill.

Money is a recurring fixation among conspiracists. The supposed dangers of a free-floating currency with no basis in a finite commodity like gold is one such fixation. Many conspiracists are obsessed with the symbolism of money.

Yet we shouldn’t be so surprised given the extent 5G has been demonised. Not least because Chinese tech giant Huawei is involved in building the infrastructure in a lot of countries. This is why anti-Chinese bigotry isn’t far behind these conspiracy theories.

Pseudo-scientific claims have proliferated about 5G. Apparently, the 5G masts emit carcinogenic waves across the neighbourhood. It’s not that much of a leap from cancer to coronavirus for the conspiracist.

This is not unusual either. People with memories going back more than 15 years will remember the claims that mobile phones will give everyone brick-sized brain tumours. It turned out mobile phones are responsible for a safe level of radiation, just like 5G.

Imagine what huge levels of radiation 5G creates if cases of brain tumors are on the rise among the young and old that are obviously caused by 4G. When mobiles first appeared, and I had one then, we were warned that the radiation they produced were very dangerous. Now – silence.

You don’t have to accept the Twin Towers theories. You could decide the real story was Building 7 and the idea that the structure was brought down for the insurance money. The same is true of the COVID-19 theories to some extent.

You could believe the theory that there was a patent filed for coronavirus vaccines in 2015. You might take the leap of faith to believe Joseph Rothschild owns the patent.

You might even believe that the opening of the 2012 London Olympics was a warning of the COVID-19 outbreak.

Once you’ve accepted the ‘what’ and ‘how’ accounts, you’re left with the ‘why’ theories of COVID-19. This is where it gets really dark and weird. You might think Bill Gates is behind the virus to promote his own vaccinations or even to microchip millions of people.

One version of the Gates theory is that the billionaire is engaged in a plot to control and reduce population growth. The less extreme version is that Gates owns the patent for the vaccine, which he does for a version of coronavirus – just for chickens and pigs.

Nevertheless, people cling to conspiracy theories because they seem to hold explanatory power over the inexplicable events they see around them. We might never be free of conspiracism, but such theories don’t have to be the only way to understand the world.

The Limits of Debunking

Fact-checking and debunking is an honourable exercise in reason. However, the use-value of such actions is due to how much reason is involved in the first place. It’s possible to debunk a theory that’s grounded in rationality and truth claims. But this is not the case with the average conspiracist.

The conspiracist applies Occam’s razor in reverse, cutting backwards and eliminating all reasonable, simple explanations of what transpired. The Twin Towers couldn’t have fallen after those planes flew into them at 700mph and exploded. No, that’s absurd. It must be that the Towers were brought down by a controlled explosion.

The 9/11 truther claim the Twin Towers couldn’t have been compromised by intense heat from an explosion of jet fuel. It was impossible. So it had to be demolition charges or a missile or it was all a hologram. In any case, it was Bush or Mossad or possibly both.

The people who believe such things are making a truth claim about the world, but not in a simple empirical sense. It’s not really about the physics behind why towers fall or the temperature at which steel starts to bend. It’s about why the world is the way it is.

So you need a captivating account of world history and a set of values that people can believe in. It’s not enough to make a negative case against the strange views they’ve picked up on the internet. This is why conspiracism is so widespread.

Some conspiracy theories are barely even ‘conspiracies’ even on their own terms. A bit like the people who believe the achievements of Ancient Egypt are really down to aliens landing on earth and deciding to build a few pyramids before taking off again.

The people who believe aliens built all the monuments of the Ancient world may seem like harmless eccentrics, but even they are capable of destructive actions. For example, a Bosnian man named X has argued his country is actually home to the biggest pyramids of all.

He has taken it on himself to excavate the hills around Sarajevo to prove this, but, in doing so, has destroyed important archaeological sites. He has higher hopes than honest archaeologists though. He wants to give Bosnia’s tourism industry a boost.

Remember when the turn of the millennium was supposed to trigger Y2K? I wonder how many people prepared for the end times in 1999. Perhaps it was a great boost to the survivalist movement, but did they all realise they were wrong when the clock struck midnight on New Year’s Eve?

Most likely such people moved onto the next great conspiracy. However, it would be a while before a doomsday theory would be so popular again. Remember when 2012 was supposed to be the end of the world?

Many believers claimed the date was down to an ancient Mayan prophecy and some shaggy hippies gathered at Stone Age to bring in the end times. It later turned out the Mayans had no conception of the apocalypse and saw history as a cycle.

In other words, an Ancient civilisation was more rational than people with smartphones.

The coronavirus pandemic is just the latest event in a long history. Everything from the Black Death and the Fire of London to the assassination of JFK and the 9/11 attacks has been the focus of conspiratorial speculators.

Unfortunately, this history will continue for as long as people are frightened and confused.

A study from Oxford University found one-fifth of 2500 participants endorsed to some degree that ‘Jews have created the corona virus to collapse the economy for financial gain’ https://t.co/REX4UXfhR3

Foucault once suggested that Clausewitz’s famous observation, “war is not merely a political act but a real political instrument” carried out by other means, be reversed, with politics made an extension of war. END_OF_DOCUMENT_TOKEN_TO_BE_REPLACED

Brexit will turn three on the last day of January, over six years since the 2016 referendum kickstarted Britain’s race to the bottom. END_OF_DOCUMENT_TOKEN_TO_BE_REPLACED

Be careful what you wish for. It may be a cliché, but it’s one the Greens are learning all over again. END_OF_DOCUMENT_TOKEN_TO_BE_REPLACED