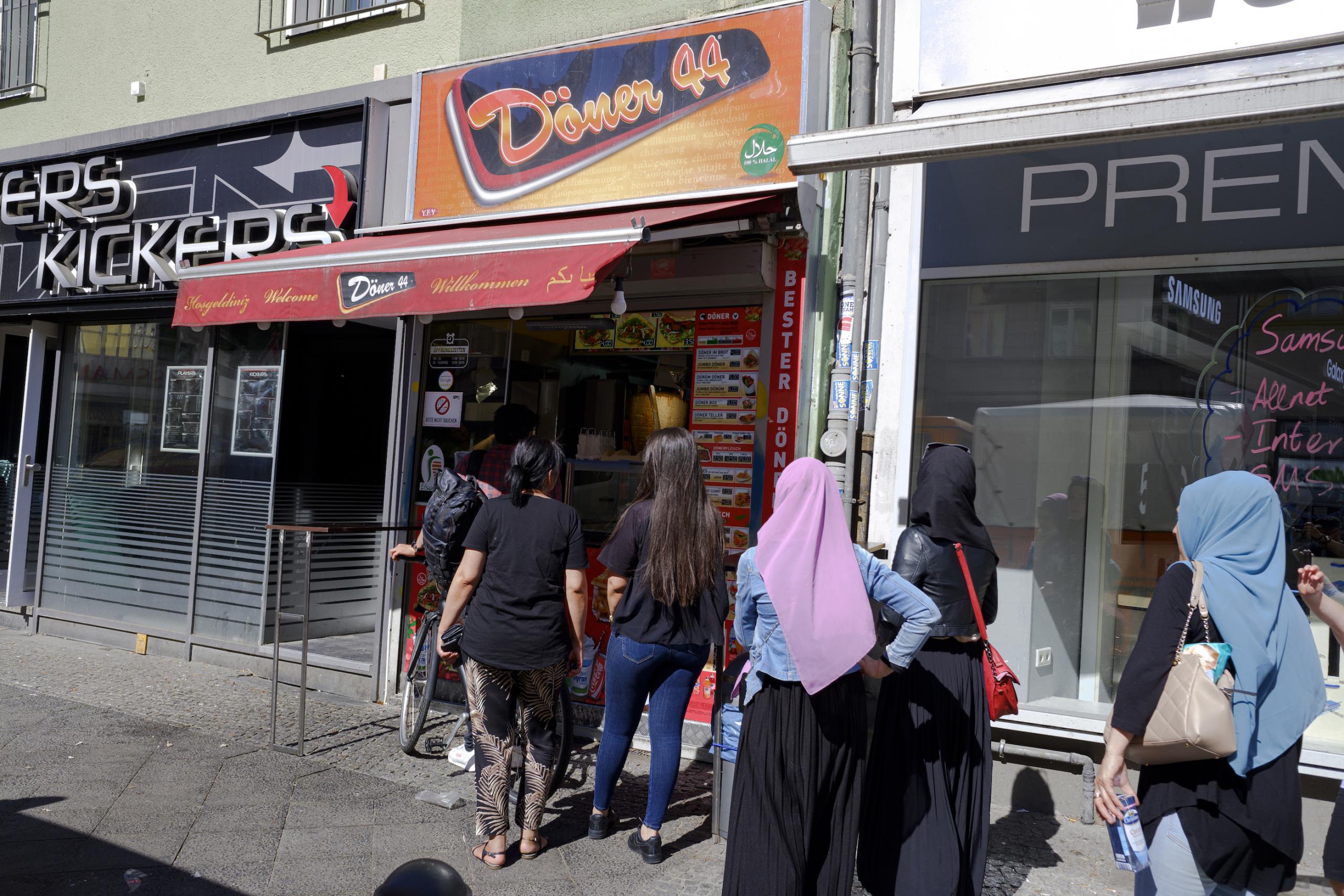 Having been confined to our kitchens for the better part of lockdown, the fast foods ubiquitous in our neighbourhood, Neukölln – hummus and döner – would be as good as caviar.

Though shopping during daytime hours had been permitted, I found it difficult to unshackle myself from my desk.  I’d worked from home for nearly two years when the Coronavirus crisis hit.

Anything to make the evening hours more relaxing, without having to cook, was a relief.  I was exhausted from having to be on 12 hours a day. I planned on getting something special.

I’d pick up two durum (yufka or tortillas, filled with kebab and salad) for dinner, at the beloved Döner 44, on, Karl-Marx-Straße. Not a big meat eater, I figured it was worth a break from my vegetarian normal.

The first chance I got, I dashed out of the apartment at 5:30, excited at the prospect. I knew I was cutting it close, especially given the long queues I’d already seen after restaurants first reopened.

But, by the time I arrived, it wasn’t so bad. There were only eight people in front of me and orders appeared to be getting processed quickly. Predictably, I turned out to be the last in line, before closing.

Drained from work, I listened to the languages being spoken by the people in front of me. I could overhear Arabic, Turkish, and what sounded like Farsi. Likely Afghan refugees, I imagined.

I hadn’t overheard a personal conversation in over six weeks.  It felt grounding to be in the presence of other people talking. Particularly in languages closer to home, some of which I understood bits of.

The reverie didn’t last for very long. All of a sudden, a young white man in khaki slacks and an oxford shirt approached me and calmly began repeating the name “Adolf Hitler, Adolf Hitler.”

He started with me, and, then, methodically, repeated it to everyone else in the queue. When there was no one left to tell, he quietly walked away. We all stood there and looked at each other, in shock.

We’re back in Germany, was the message, I mused. Not bad for a first night out after lockdown. If this is how the crisis had affected people, god forbid what the future holds in store for us.

I wondered if the man knew what an ideal audience we were – that I am Jewish, along with the Muslim men who stood in front of me. Probably not. With my Mediterranean complexion, I was an Auslander, regardless.

Patronising a döner stand was bad enough, for someone of his disposition, as it made us all outsiders. Never mind that this version of kebab was invented in Berlin, not Turkey, even though it looks a lot like Arab Shawarma.

Food is always a signifier of difference anyway. It doesn’t have to be imported to make you a foreigner, according to this logic. If it’s different, it’s disrespectful, like speaking Arabic in Berlin and not German.

In historic context, it wasn’t an innocent choice of location, either. For the remaining time I had to wait in line, I half-expected someone to start shooting at us. Few boroughs of Berlin have witnessed more racist violence in recent years than mine.

In my case, it was also a question of semantics. I couldn’t help but recall the insultingly named Döner-Morde (Döner Killings) by a group going under the name Nationalsozialistischer Untergrund (National Socialist Underground).

Over thirteen years, ten persons were killed by Nazi terrorists, nine of the victims being of Turkish background. (The tenth, an ethnic Greek policewoman, had been mistaken for a Turk.)  Hence, the insulting döner tag, originally given the killings by the Nürnberger Zeitung.

If the guy who dished out the Hitler bit to us had been armed, this could have been another version of the same, I feared. I may be prone to thinking too much about language. But I’m a journalist and more often than not it pays – quite literally – to be able to connect such dots.

Clearly, our Hitler worshipper’s selection of Döner 44 was not made in a vacuum. A rather obvious place to threaten people, the references to the Döner-Morde were inescapable to anyone with a bit of history under their belt. Coming seven weeks after the Hanau murders, in which nine migrants were killed (all but one Muslim), it was an especially racist thing to do.

To this day, nearly fourth months later, my neighbours continue to post flyers bearing images of the victims of the massacre. They’re still in mourning, with good reason.

In many respects, the lockdown interrupted communal processing of the tragedy, because of the prohibitions on large assemblies of people for worship services. So, German Muslims post isolated pictures of the deceased to letterboxes instead.

Reiterating the name of the founder of National Socialism to minorities is also a way of reminding them that our existence, in Germany, remains precarious, despite the government’s antiracism. If Coronavirus made everyone feel at death’s mercy, Muslims and foreigners ought to feel twice the burden, is the message.

I hadn’t planned on writing about this incident, though clearly I should have. For such a short period of time that it took place in, it was obviously significant and only grows more so the longer I write about it.

Trauma is like that. In the blink of an eye, we can experience a world of politics, and it always takes a lot more time to unpack it. As someone who covers discrimination, I’m always surprised by how difficult it is to write about it because the experience is so obviously layered and informed by both past and present.

What worries me the most about the situation in Germany is how ineffective antiracism is. From the most basic condemnations of state officials to the more difficult work of community activists and academics, it shouldn’t be so easy to act so brazenly or insensitively as the man who recited his Hitler mantra to me.

On the one hand, I’m inclined to fall back on the well-worn Zionist stereotypes I was raised with about Antisemitism – that it is ineradicable because Jews are not welcome anywhere outside their own country. The Diaspora is always death, as it were, even though Israel is in most respects more dangerous, not less.

On the other hand, I know that such accounts have always been dead ends. The racism that I bore witness to, on the appropriately named Karl-Marx-Straße, is a great example. On a thoroughfare named after the Jewish father of communism, we were being informed, through the repetition of the anti-Marx’s name, that neither the street nor the county was our home.

Why would anyone choose to be express their racism that way? Because Marx is a synonym for universality. It’s the linguistic equivalent of saying our identities are economic, as much as cultural. The fact that he was Jewish, however secular, is no accident.

Marx was always trying to find a way to demonstrate continuities between people, as much as differences. Reiterating Hitler’s name, on Marx Street, was like saying there are only differences. The sooner we remember that, the easier it will be for Germans to assert their rightful privilege.

Given that Nazis have never succeeded in fully stamping out minorities, that every day for them is about discrimination, it’s hard to imagine they’ll ever get what they want. But that doesn’t mean they won’t continue to murder and incite, and cause conflict. That’s what most liberal democracies seem at a loss to control. Increasingly so.

All I ask is that the day after emerging from one of the most prolonged periods of confinement I’ve ever experienced, that I don’t have to get grief from a fucking Nazi. It turned what could have been a joyous day, and a killer dinner, into another reason to fear for my future in Germany.

I’d gladly return to lockdown if it means not having to deal with such people.

Photograph courtesy of the Joel Schalit. All rights reserved.

Brexit will turn three on the last day of January, over six years since the 2016 referendum kickstarted Britain’s race to the bottom. END_OF_DOCUMENT_TOKEN_TO_BE_REPLACED

Be careful what you wish for. It may be a cliché, but it’s one the Greens are learning all over again. END_OF_DOCUMENT_TOKEN_TO_BE_REPLACED

Before his arrest, Andrew Tate was just another influencer with bad politics. END_OF_DOCUMENT_TOKEN_TO_BE_REPLACED