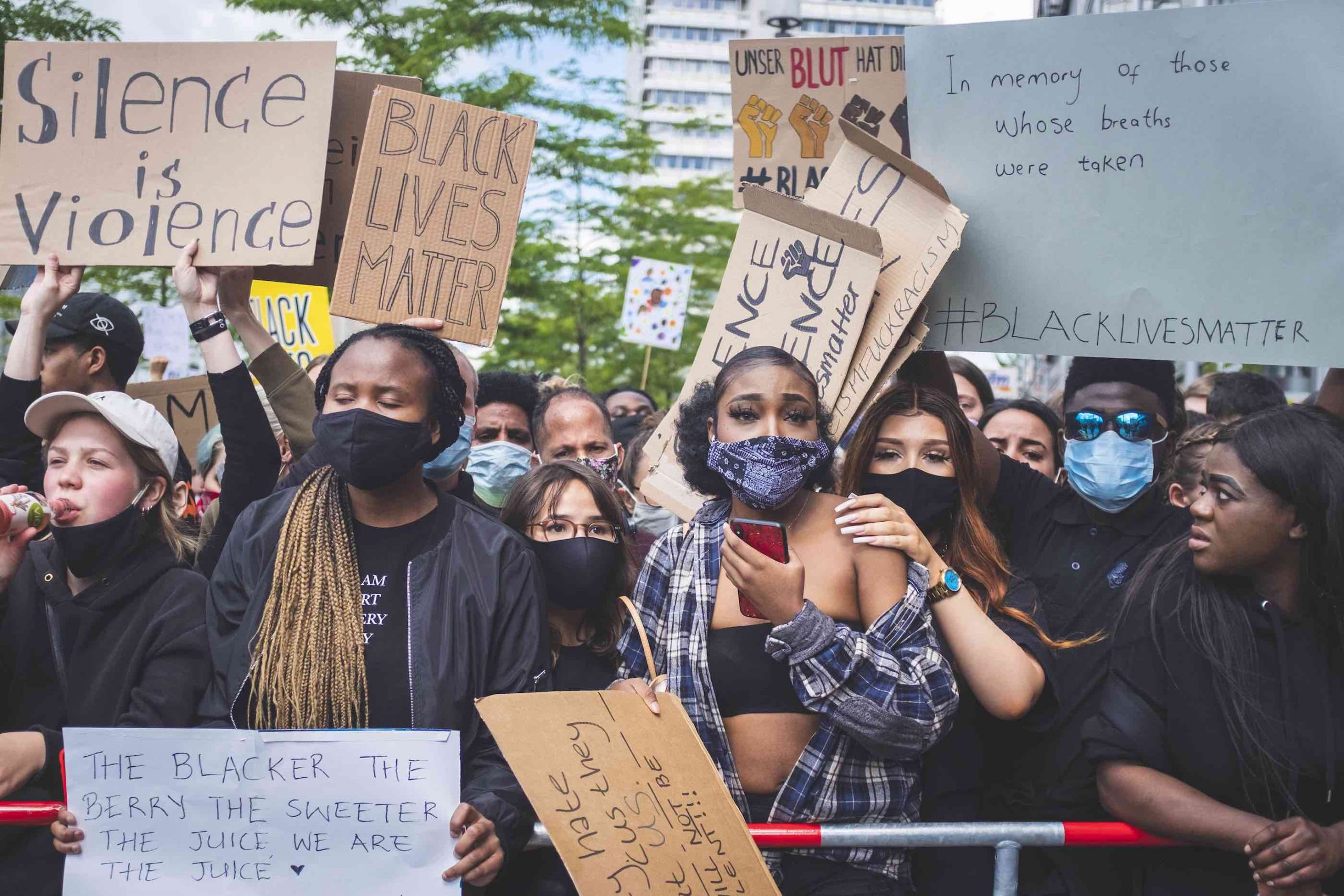 That this was a demonstration about the murder of George Floyd, an African American, in the Midwestern city of Minneapolis, made English seem even more reasonable.

The fact that the only German which could be heard was the speeches being made at the Nein zu Rassismus (No to Racism) demonstration underlined its uniqueness. It felt like a translation exercise.

The 15,000 protestors who had gathered in Alexanderplatz that day may have been showing their solidarity with African Americans. But they were using it to highlight German racism.

What better a way to do that than by using English. The United States is one of the most racist countries in the world. But it’s also one with an astonishing history of anti-racism, too.

Especially for Germans, given America’s role in defeating the Nazis and convicting its leaders of genocide. The US was always Jimi Hendrix and Bob Dylan, not Ronald Reagan and Donald Trump.

The language of democracy would logically be English. Germans may be resentful that migrants don’t immediately gravitate towards Deutsch, but English is more synonymous with diversity.

Judging from the strong African presence at the demonstration, it made sense. I could overhear a lot of French accents. In all likelihood, these were trilingual Francophone migrants.

The slang they used was entirely appropriate and native to the situation being protested against, both at home, in Germany and abroad.

Phrases such as “I can’t breathe”, “Black Lives Matter” and the expected “Fuck tha Police” were ubiquitous. This was how to demonstrate against the United States, now.

I couldn’t help but think back to newsreels I’d seen of protests against the Vietnam War here and against Ronald Reagan’s 1982 visit to Berlin. This was an entirely different vocabulary.

Not just in terms of the actual words used, but regarding what it said about German familiarity with American politics.

In the 1980s, there was a wellspring of anger against the United States, in Europe, that was a lot more alien, culturally than what I was seeing in Berlin, nearly forty years later.

At Alexanderplatz, it was as though the two countries had fused. The English fluency was a signifier of the cultural integration that had taken place. The rage at the killing, another.

Protesters evinced levels of understanding of American racism that I would have had a hard time encountering amongst Americans I knew when I lived in the United States. Not all, by any means. But enough to make me uncomfortable.

So studied are US politics, in German media, it shouldn’t be a surprise. The interest can be intense, but a given, considering the heavy presence of the American military in Germany since 1945.

It is a familiarity typical to globalised cultures, in countries under foreign rule, however informal, for decades if not longer. Germany is sovereign in most respects, except when it comes to security.

Edward Snowden’s 2013 revelations that the US National Security Agency (NSA) was allowed by treaty to engage in mass surveillance of German communications, including those of Angela Merkel, with the support of the Federal Intelligence Service (BND), is but one example.

The scandal was entirely in keeping with American policy in other countries, especially its allies. The German government’s grudging acknowledgement of the practice spoke reams about its relations with the US.

It knew everything, of course, but couldn’t admit to its continued subservience to Washington, so long after World War II. The revelations helped loosen everyone’s tongues about the Americans, something which the anti-racism protests that took hold of the country the last ten days expressed in their own way.

Leave it to migrants and German minorities to be ones to say it all out loud. “We know the Americans,” is the refrain I repeatedly took away from what I heard at the demonstrations I covered.

There was an element of déjà vu to it. “We know the British,” was a phrase common at the dinner table in my Israeli family growing up. Though they’d only occupied Palestine for thirty years (1918-1948) everyone had a PhD in the UK.

Of course, send them to London for a week, and the country would feel a little less familiar. You get the idea. Politics often allows for a greater familiarity than everyday life does.

Germans know the Americans too, perhaps a bit better. More water under the bridge will have that effect, and make the two countries indistinguishable in ways that often go unacknowledged.

That’s why so much of the criticism levelled at the United States in Germany, for its racism, has been so heartfelt. Whether the demonstrations have been in Berlin, Munich or Hamburg, the proximity between the two countries can be suffocating. The large numbers of protestors who attended them bear this out.

You just have to take into account the lack of borders in the conversation. Attacking racism in the United States is a way of attacking discrimination in Germany. Given the dramatic rise in racist violence since the 2015 refugee crisis, it makes perfect sense that the George Floyd murder would become a domestic issue here.

The numbers speak for themselves. According to a report issued on 9 June by the Federal Anti-Discrimination Agency (ADS), racial discrimination in Germany rose 59 per cent between 2016 and 2019, with the latter year’s violence culminating in the 9 October Halle synagogue attack.

Though ultimately unsuccessful – the terrorist was unable to breach the synagogue door, to murder its congregants on Yom Kippur, the holiest day in the Jewish calendar – the event paralleled the attack on a synagogue in Pittsburgh in 2018, which claimed eleven lives.

Taking place just short of a year earlier, the 27 October Shabbat killings were carried out by Robert Gregory Bowers, who, like the Halle assailant, Stephane Balliet, was a lone wolf extremist. Both terrorists blamed Jews for mass immigration.

Terrorists of all stripes tend to copy each other. Particularly during times of crisis, when they think they can influence public opinion. The 2016 murder of British Labour MP Jo Cox, by a neo-Nazi, a week before the Brexit referendum, is one such example. This is another.

But it goes deeper than that. American and German racisms mirror each other in many profound ways. As historians have repeatedly shown, the Nazis took inspiration from the genocide of America’s indigenous population and its Jim Crow laws. I could go on.

For Germans eager to avoid a repeat of the Holocaust, and its apartheid politics, consciously or not, US precedents tend to exert a tremendous influence. Run it through a post-Cold War youth culture blender, and it sounds like they live in America.

Everything is punk and hip-hop, street art and social media. It’s easy to deride for its superficiality and cultural appropriations, but harder to unpack when it takes on explicit politics, best manifest in the George Floyd protests.

The demonstrations are in English, as well as German, because racism, in the United States, as a topic of political discussion, is older than it is in Germany. From the Civil Rights Movement to Barack Obama, it has global echoes.

For a country as close to the United States, with equally profound racism problems, historically, that matters. Particularly given the rise in discrimination in recent years, not just against Jews, but against the 890,000 asylum seekers who arrived during 2015.

That’s the ultimate import of these demonstrations. Not just for the ones that have taken place in Germany, but in Belgium, France, Italy and the United Kingdom, too. They’re the first pan-European demonstrations against racism.

Given the threat that national populist parties have posed to minorities the past decade, this is something that can be built on. With an estimated 22 million migrants in the EU27 (4.9 per cent of the bloc’s population,) that’s a substantial potential counterbalance.

As far as my home, Germany, is concerned, history is also worth taking into account. If only there was anti-racist activism of this scale in 1930. It’s hard to imagine Hitler would have had it as easy taking power. Thank god for George Floyd and the Germans who remember him.

Brexit will turn three on the last day of January, over six years since the 2016 referendum kickstarted Britain’s race to the bottom. END_OF_DOCUMENT_TOKEN_TO_BE_REPLACED

Be careful what you wish for. It may be a cliché, but it’s one the Greens are learning all over again. END_OF_DOCUMENT_TOKEN_TO_BE_REPLACED

Before his arrest, Andrew Tate was just another influencer with bad politics. END_OF_DOCUMENT_TOKEN_TO_BE_REPLACED