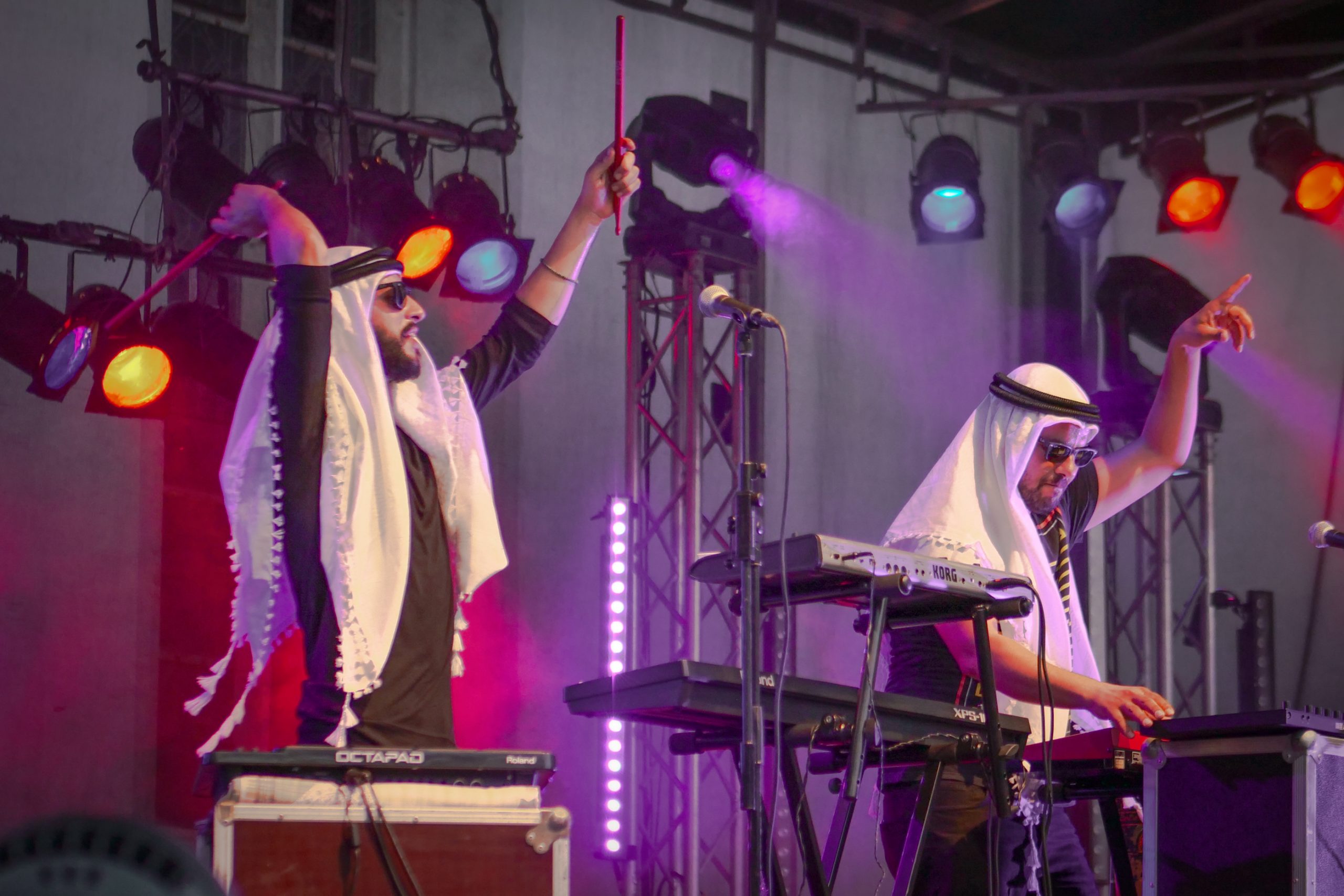 While the opening beats are sufficiently cosmopolitan to resist identification, the first keyboard figure transports you out of Europe and the ones that follow, like waves breaking on the shore, keep you there.

On tracks like “Sa7rawe”, “Edine”, “Shaglaba”, Issam Elias’s fleet fingers manage to transmute traditional motifs of the region into something respectfully futuristic. And Nasser Halahlih’s wide-ranging experience as one of the first Palestinian electronic musicians attaches them to the sort of club-ready rhythmic structures that are recognizable the world over.

Unlike many contemporary electronic bands, Zenobia manages to resist the impulse to pursue a narrow subgenre at the expense of a potentially broader appeal. Not only do the “Eastern” elements in their music point backwards and forwards. So do the “Western” ones.

The title track and “El3ab El3ab” are particular standouts in this regard, repurposing the subtle Orientalism found in much 1970s reggae so that the Middle Eastern forms Zenobia grew up with are reimagined as a kind of proto-dub.

Halak Halak demonstrates a remarkable facility for mixing heterogeneous source material into something compelling and cohesive.  But even as the music’s getting your ass onto the dance floor, it threatens to take your mind into the sort of places where a guide is de rigeur. It’s so much more than, for lack of a better term, Levantronica.

Zenobia provokes hard questions about the relationship between Europe and Israel that have nothing to do with arms sales and peace plans.

This is music being sold by Europeans to Europeans that nevertheless calls into question the idea of “Europe” as a psychological construct.

In particular, the Europe that has managed to be right next to Africa and Asia for millennia without being absorbed into them, retaining its distinctness even when, like the war-torn territory of Westeros in the wildly popular television Game of Thrones, it is comparatively primitive and poverty-stricken.

While actually existing Europe has been dominating its neighbours politically for the past 500 years, its cultural supremacy has been considerably more tenuous.

To be sure, many of the greatest achievements in music, literature, and the visual arts have come from that marginal continent. But few of them are expressions of a purely European sensibility, independent of foreign influences.

As the legendary Palestinian intellectual Edward Said demonstrated in his landmark book on Orientalism, what we think of as European culture frequently represents the culture of Europeans responding to influences from the East and, because the reach of Islam once extended to the Iberian Peninsula, a southwest that is still regarded as “Eastern”.

That was true for centuries of high art. And it remains true today for the ostensibly low culture of the dance floor. Zenobia’s label, the Brussels-based Crammed Discs, is one of the latest examples. Co-released with the label’s own signees, Parisian band Acid Arab, Halak Halak is perfectly in tune with Crammed’s Middle Eastern-friendly catalogue.

But Zenobia greatly complicates this picture. Because even though Halak Halak is being marketed within a context that remains persistently, even perversely Orientalist, it does not fit into any of the neat-and-tidy categories of cultural appropriation associated with the so-called Orient.

For one thing, Zenobia comes from Israel, a nation that is as confusing to classify culturally as it is to comprehend politically. For another, it hails from Haifa, a decidedly mixed Palestinian-Jewish city that defies the increasingly Jewish norm of the country’s population centres.

What Israel says it is officially, is always opposite to what its inhabitants experience, both Jewish and Palestinian. The problem is not so much that they don’t ultimately agree, but the political establishment’s historic insistence that Israel is both monocultural – meaning Jewish – and a democracy.

Founded largely by Europeans, many of whom pretended as though the land’s existing inhabitants were interlopers and fleshed out, both literally and figuratively, by emigrants from the former Eastern Bloc not noted for their subtlety or sophistication, the geographic territory of Israel never seems to align with Ashkenazi conceptions of the place.

Yes, Israel is part of Eurovision and participates in European sporting tournaments because its immediate neighbours long refused to accept its existence. It even contributes troops to NATO exercises now, in Central and Eastern Europe. But Israel also seems to belong there in ways that go beyond political considerations.

But that Israel is never the only Israel. There is also the Israel whose young people, regardless of their religious affiliation or ethnic origin, are comfortable with a cosmopolitan vision of the Middle East that has little in common with traditional notions of European-ness. Israelis lack a corresponding political horizon, but the experience of diversity is there.

If anything, these Israelis have more in common with the Americans or Australians of a hundred years ago – brash, unfettered, culturally flexible – than your average white European.

And then there are the Israelis who have long been treated as foreigners in their ancestral home, the Palestinians, who, while usually not suffering the same level of systematic oppression as those living in the West Bank and Gaza Strip, nevertheless are discriminated against, even as their culture serves as the foundation for every idea of Israel that refuses to regard itself as Europe.

Halak Halak is a vigorous reminder that no amount of collaboration can dispense with this other Israel, the Israel that is defined for Europeans by its otherness.

Combine that with its persistent nods to the Afro-Caribbean pop that has played such a crucial role in the development of hip-hop and bass, and you end up with music that profoundly engages with the experience of displacement.

Colonialism will do that. This is its after-effect.

The 1970s was a decade of broken dreams. The end of the postwar boom brought to a close the era of middle-class liberalism in Europe and North America. END_OF_DOCUMENT_TOKEN_TO_BE_REPLACED

Serbian director Dušan Makavejev’s 1968 film Innocence Unprotected manages both to explore the legacy of wartime trauma seriously and to make fun of itself in the process.  END_OF_DOCUMENT_TOKEN_TO_BE_REPLACED